Furin is a type of enzyme known as a proprotein convertase. These enzymes convert various inactive proteins into active proteins.

Many of the proteins activated by furin play a role in the regulation of blood pressure and inflammation. Furin is also thought to play a role in the development of atherosclerosis – the narrowing of arteries caused by the build-up of fatty plaques within arterial linings.

The furin enzyme is coded for by your FURIN gene. This trait analyses variants of your FURIN gene, some of which are associated with an increased risk of high blood pressure, atherosclerosis, and coronary artery disease.

What is blood pressure?

Blood pressure refers to the pressure of blood circulating in our blood vessels.

To get an understanding of why blood pressure is important, it may be helpful to think of our cardiovascular system as similar to a plumbing network. Under this analogy, the heart is the central pump, which pumps out water (blood) around a network of water pipes (our blood vessels).

We need a certain amount of pressure in the water pipes, otherwise the water will not flow through the system and water will only slowly dribble out every time we open the tap/faucet. This pressure is created by the central pump.

By a similar token, the pumping action of our heart creates a pressure in our blood vessels and this pressure allows blood to flow into tissues and organs, thereby delivering them oxygen and nutrients.

Generally speaking, blood pressure is significantly higher in arteries (the blood vessels that take blood away from the heart to supply tissues and organs) compared to veins (which return blood back to the heart).

Accordingly, whenever we talk about blood pressure in healthcare, we are typically referring to the pressure of blood in arteries. If you’ve ever had your blood pressure taken, you will notice that you received two figures e.g. 120 / 80 mm Hg. (Incidentally, “mm Hg” is short for “millimetres of mercury”, which is a unit of pressure).

The first figure (i.e. 120 mm Hg) is known as your systolic blood pressure. This is the pressure in your arteries during systole - when the larger chambers of your heart (called ventricles) contract to pump blood to your tissues and organs.

What is a healthy blood pressure measurement?

Blood pressures above these values are considered unhealthy, with higher blood pressures linked to an increased risk of cardiovascular disease. High blood pressure (above 130 mm Hg [systolic] or 80 mm Hg [diastolic]) is also referred to as hypertension. The table below shows how blood pressure measurements are classified. Why is high blood pressure bad for our health? 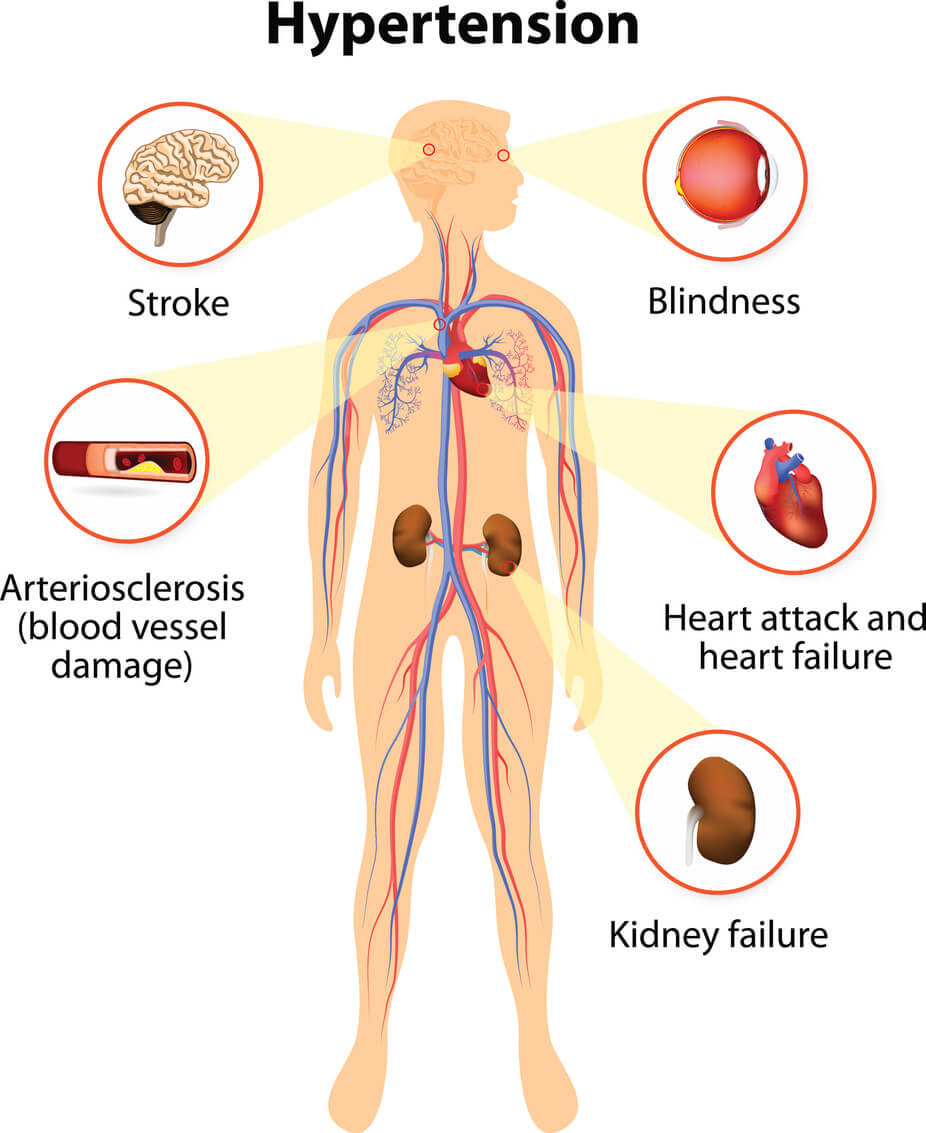 High pressure within blood vessels over time causes damage to arterial linings. This may lead to atherosclerosis, whereby arteries become narrower and harder. In turn, this impairs blood flow to various tissues and organs.

For example, high blood pressure can damage and cause narrowing of the coronary arteries that supply the heart. This increases the risk of a heart attack, when blood flow to the heart muscle is compromised. Similarly, damage to blood vessels supplying the brain can lead to stroke. Blood vessels supplying the eyes and kidneys are also particularly susceptible to damage from high blood pressure.

As well as causing narrowing and hardening of blood vessels, high blood pressure can also weaken blood vessels, causing them to bulge. A bulging of an artery is known as an aneurysm. If an aneurysm bursts, it can have fatal complications.

How is furin involved in the regulation of blood pressure?

One of the proteins activated by furin is the prorenin receptor.  This receptor plays a key role in our Renin-Angiotensin-Aldosterone System – a hormonal system that helps us regulate blood pressure and blood volume. You can read more about this system in the ‘Your Renin-Angiotensin-Aldosterone System and why it's important’ article. One of the main hormones generated by this system is called angiotensin II. This hormone acts to increase blood pressure by causing constriction of blood vessels – a process known as vasoconstriction.

Angiotensin II also stimulates the reabsorption of sodium by the kidneys. The movement of sodium also causes more water to be reabsorbed into the bloodstream (rather than be filtered out as urine), leading to an increase in blood volume and blood pressure.

By activating the prorenin receptor, furin is thought to enhance the production of Angiotensin II. Furthermore, furin is also shown to activate the specialised sodium channels that are responsible for reabsorption of sodium in the kidney. These two actions suggest that furin plays a role in the regulation of blood pressure.

How are FURIN gene variants related to my risk of high blood pressure?

The furin enzyme is encoded by your FURIN gene.

Studies have shown that certain variants of your FURIN gene are associated with an increased risk of high blood pressure (hypertension). For example, a study of 200,000 people of European descent found that the ‘T’ variant of the FURIN gene, created by the rs2521501 SNP, is associated with a higher risk of hypertension.

Similarly, a study of Kazakh and Uygur Chinese subjects found that several other variants of the FURIN gene (created by different SNPs) are more frequently observed in individuals with hypertension. For example, people carrying one particular FURIN gene variant, the ‘G’ allele created by the rs6226 SNP, were roughly 1.3 – 1.5 times likely to have hypertension.

Your High Blood Pressure Risk (FURIN) trait analyses several different variants of your FURIN gene in order to calculate a genetic risk score and broadly classifies your risk of hypertension.

Atherosclerosis refers to the build-up of fatty plaques (called atheroma) within arterial walls, which causes narrowing of arteries. This impairs blood flow to tissues and organs and can lead to issues such as heart attack and stroke. We’ve encountered atherosclerosis before, in your Saturated Fat Response (APOA2) and CETP and ageing traits. Readers are encouraged to revisit these traits for a broader overview.

Furin is thought to play a role in the development of atherosclerosis.

How does atherosclerosis develop?

On a microscopic level, the formation of fatty plaques can be divided into 5 main stages. Furin is thought to play a role in each of these stages.

The innermost lining of our arteries is called the endothelium. It is a single layer of cells that regulates the movement of substances and cells into and out of the bloodstream, plays a role in controlling the dilation and narrowing of blood vessels (called, respectively, vasodilation and vasoconstriction), and helps to prevent inflammation and the formation of blood clots. If the endothelium gets damaged, it stops working properly, becomes more permeable, and also begins to promote inflammation and blood clotting. This phenomenon is known as endothelial dysfunction.

Endothelial dysfunction can result from physical injury to blood vessels (e.g. from strong forces caused by blood flowing at high pressure) or from chemical damage (e.g. from Reactive Oxygen Species / free radicals generated by smoking, high blood sugar levels, or high blood fat levels). This is partly why high blood pressure, smoking, diabetes, and high-fat diets are all associated with an increased risk of atherosclerosis.

As endothelial dysfunction increases the permeability of the endothelium, it becomes easier for various cells and substances to enter into arterial walls. In particular, fats and cholesterol start to penetrate and become trapped within arterial walls.

As we learned in your Blood Fat Level (APOA5) Trait, lipids (fats and cholesterol) are transported in the bloodstream in particles called lipoproteins. There are different types of lipoprotein particles, which differ in how and where they transport lipids.  In atherosclerosis, it is predominantly low density lipoprotein (LDL) particles that enter and become trapped in arterial walls. One type of white blood cell to migrate into the arterial wall are called monocytes. These differentiate into another type of white blood cell, macrophages. Macrophages engulf the oxidised LDL particles forming foam cells in the process. Foam cells start to accumulate and produce more pro-inflammatory cytokines, which perpetuates inflammation and development of fatty plaque.

Production of pro-inflammatory cytokines by foam cells and endothelial cells causes smooth muscle cells from deeper in the arterial wall to migrate towards the endothelium and proliferate. This causes thickening of the arterial wall and enlargement of the fatty plaque.

Over time, the plaque gets bigger and begins to occlude the lumen of arteries. This impairs blood flow through the artery. It is also possible for plaques to rupture and form a blood clot (called a thrombus), which may completely block an artery. What is coronary artery disease? How is furin involved in atherosclerosis and coronary artery disease?

As mentioned previously, furin is an enzyme that activates various other proteins. Many of the proteins activated by furin are involved in the 5 stages of atherosclerosis described earlier.

In particular, furin is involved in:

How are FURIN gene variants related to my risk of atherosclerosis and coronary artery disease?

Certain variants of the FURIN gene are associated with an increased risk of atherosclerosis and coronary artery disease.

For example, a SNP (rs17514846) of the FURIN gene creates two variants or alleles: the ‘C’ allele and the ‘A’ allele. Studies suggest that individuals carrying the ‘A’ allele have a slightly (1.04 – 1.07 times) increased risk of coronary artery disease.

Furthermore, another study found that individuals with this FURIN gene variant had thicker walls of the carotid artery (a major artery in the neck). This measurement (known as carotid intima-media thickness) is a well-established marker of atherosclerosis and predictor of future cardiovascular events such as heart attack and stroke.

In addition to calculating your genetic risk of high blood pressure, your High Blood Pressure Risk (FURIN) trait also broadly classifies your risk of coronary artery disease based on the FURIN gene variants you carry.

Your High Blood Pressure Risk (FURIN) trait analyses variants of your FURIN gene and classifies your risk of high blood pressure and coronary artery disease. Depending on what variants you have, you will be classified as: