Triglycerides (TGs) are the most common type of fat found in the body. A triglyceride molecule is composed of three fatty acids attached to a molecule of glycerol. As we learned before in the Fat metabolism (beta-oxidation) blog, triglycerides form a good source of energy because they contain fatty acids, which in turn can be used to generate ATP (our cell’s energy currency). Triglycerides are therefore an important fuel source for exercising muscles. Similarly, we also store triglycerides in fat (adipose) tissue as an energy reserve. On this note, excess carbohydrate and glucose in our diet can also be converted into triglycerides for storage.

How are triglycerides transported and metabolized?

Triglycerides are insoluble in water and therefore have to be packaged into special particles called lipoproteins before they can be transported in the bloodstream.

Lipoprotein particles are formed by combining triglycerides with cholesterol (another fat like substance), phospholipids and a specialized type of protein, called apolipoprotein. Given these functions, apolipoproteins have a significant impact on the way we transport and use fats.

Transporting triglycerides from our diet

When we eat food containing triglycerides, our digestive system breaks them down into their component parts (i.e. fatty acids and glycerol). These are then absorbed by the intestine, where they are recombined back into triglycerides.

Within intestinal cells called enterocytes, triglycerides are packaged with cholesterol and apolipoproteins into particles called chylomicrons.

Chylomicrons then transport triglycerides in the bloodstream, where they can be used for energy by muscles or stored in adipose tissue. For either of these processes to happen, triglycerides first need to be broken back down into fatty acids. This is carried out by an enzyme called lipoprotein lipase (LPL), which is found in the blood vessels and capillaries supplying muscles and adipose tissue.

Lipoprotein lipase breaks down the triglycerides packaged within chylomicrons, releasing free fatty acids that can be taken up muscle cells, adipocytes (fat cells) and other tissues. In the process, chylomicrons get converted into smaller lipoprotein particles called remnant chylomicrons. 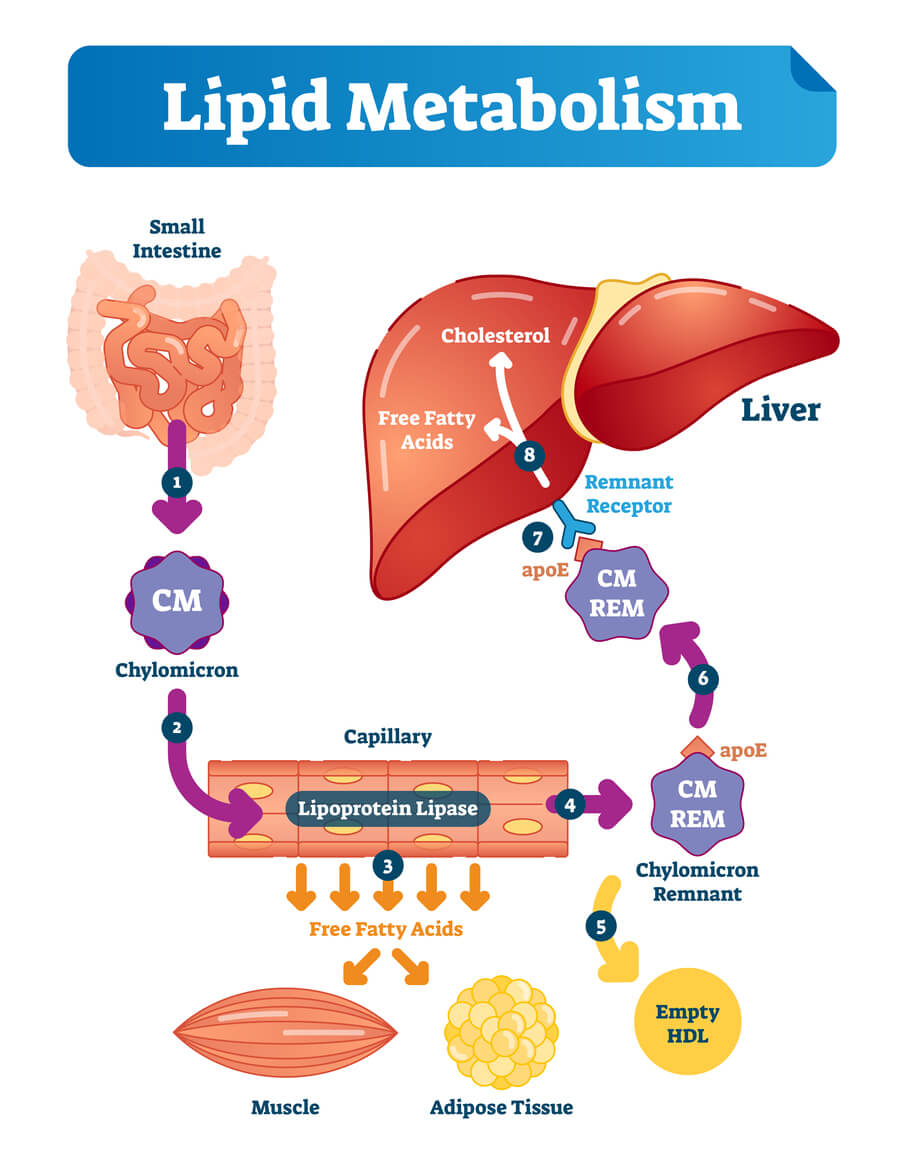 Transporting triglycerides made by our liver

As well as getting triglycerides from our diet, the liver is capable of making its own triglycerides. For example, if we consume excess carbohydrate, the resultant glucose is converted in triglycerides.

Triglycerides produced by the liver are packaged into lipoprotein particles called VLDL (Very Low Density Lipoproteins). VLDL particles are then released into the bloodstream and transported to other tissues, such as muscle and adipose (fat) tissue.

As with triglycerides in chylomicrons, triglycerides transported in VLDL particles can be broken down to release free fatty acids, which in turn can be taken up and used for energy or built into fat stores. Again, this process is carried out by the lipoprotein lipase enzyme. 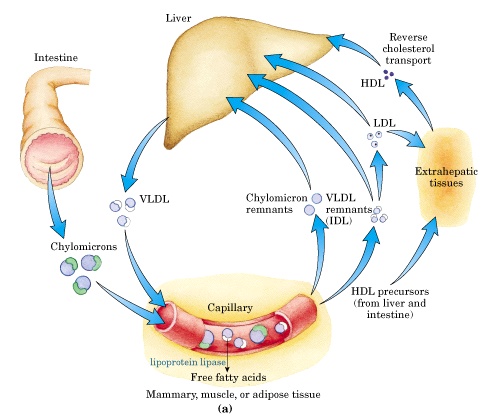 Why are high blood levels of triglycerides bad for your health?

High levels of triglycerides in our bloodstream are linked to an increased risk of developing heart disease. More specifically, high blood triglycerides are thought to lead to narrowing or hardening of arteries (a condition known as atherosclerosis). When arteries become hardened and narrowed, they can disrupt blood flow to vital organs. Heart disease occurs when atherosclerosis takes place in the coronary arteries, therefore limiting blood flow to heart tissue. (For this reason, heart disease is sometimes also referred to as coronary artery disease).

The hallmark of atherosclerosis is the development of fatty plaques (called atheromas), which get deposited on the lining of arteries. This process is linked to the transport and metabolism of triglycerides. As mentioned earlier, triglycerides are packaged with cholesterol and transported in the blood in lipoprotein particles (predominantly, chylomicrons and VLDL). A high level of blood triglycerides essentially means that we have lots of chylomicron and VLDL particles circulating in our bloodstream. In turn, these particles can lead to the formation of fatty plaques.

When chylomicrons are metabolized and their triglycerides are removed, the resultant remnant chylomicrons are absorbed into the arterial wall lining. Their remaining contents (mainly cholesterol) are then taken up by macrophages (a type of white blood cell) and transferred into fatty plaques.

Similarly, when VLDL particles are metabolized and their triglycerides removed, they are converted into IDL and then into LDL. Both IDL and LDL particles are also absorbed into arterial walls, where their cholesterol-rich contents are deposited into fatty plaques.

Triglycerides in the bloodstream are often stored in adipose (fat) tissue. High levels of triglycerides can therefore also lead to increased fat deposition, and thereby increase your risk of obesity.

In addition to these cardiovascular and metabolic effects, extremely high levels of triglycerides can lead to inflammation of the pancreas (pancreatitis).

ApoA5 is short for apolipoprotein A5.

It is an apolipoprotein that is found on chylomicrons and VLDL particles and plays an important role in the transport and metabolism of triglycerides.

In particular, ApoA5 is thought to play a crucial role in lowering blood triglyceride levels.

The ApoA5 protein is encoded by the APOA5 gene. Variants of this gene change the expression and activity of the ApoA5 protein, which in turn lead to differences in blood triglyceride levels.

On a related note, APOA5 gene variants (or alleles) also alter the risk of diseases that are related to high blood triglyceride levels, such as heart disease, obesity and the metabolic syndrome. *

*(Metabolic syndrome is the name given to the cluster of high blood pressure, poor insulin sensitivity, high blood lipids and obesity).

Your APOA5 and triglycerides trait looks at variants (alleles) generated by several SNPs (Single Nucleotide Polymorphisms) of the APOA5 gene, including:

This SNP causes a change in the DNA sequence of the APOA5 gene, from the letter T to the letter C. This creates two gene variants or “alleles”: the more common (or ‘major’) ‘T’ allele and the less common (or ‘minor’) ‘C’ allele.

Studies suggest that the minor ‘C’ allele is associated with increased blood triglyceride levels and a higher risk of obesity, heart disease and metabolic syndrome.

This SNP creates two different alleles: the major ‘A’ allele and the minor ‘G’ allele. Individuals carrying one or two copies of the ‘G’ allele are shown to have higher blood triglyceride levels and are at greater risk of developing heart disease, obesity and the metabolic syndrome.

This SNP causes a T-->C change at another site (different to rs662799) in the APOA5 gene. The resultant minor ‘C’ allele is associated with reduced expression of the ApoA5 protein, increased blood triglyceride levels and a greater risk of coronary artery disease.

The previously-described SNPs, rs662799, rs651821 and rs2266788, are located very close to one another within our DNA sequence (or genome). As a result of this close proximity, these three SNPs are often inherited together as a cluster. To adopt the scientific lingo, we say that the SNPs are in strong linkage disequilibrium with one another.

Due to this clustering effect, if we inherit one SNP of the APOA5 gene, we are highly likely to inherit the other APOA5 SNPs too.