What is my lactate threshold? 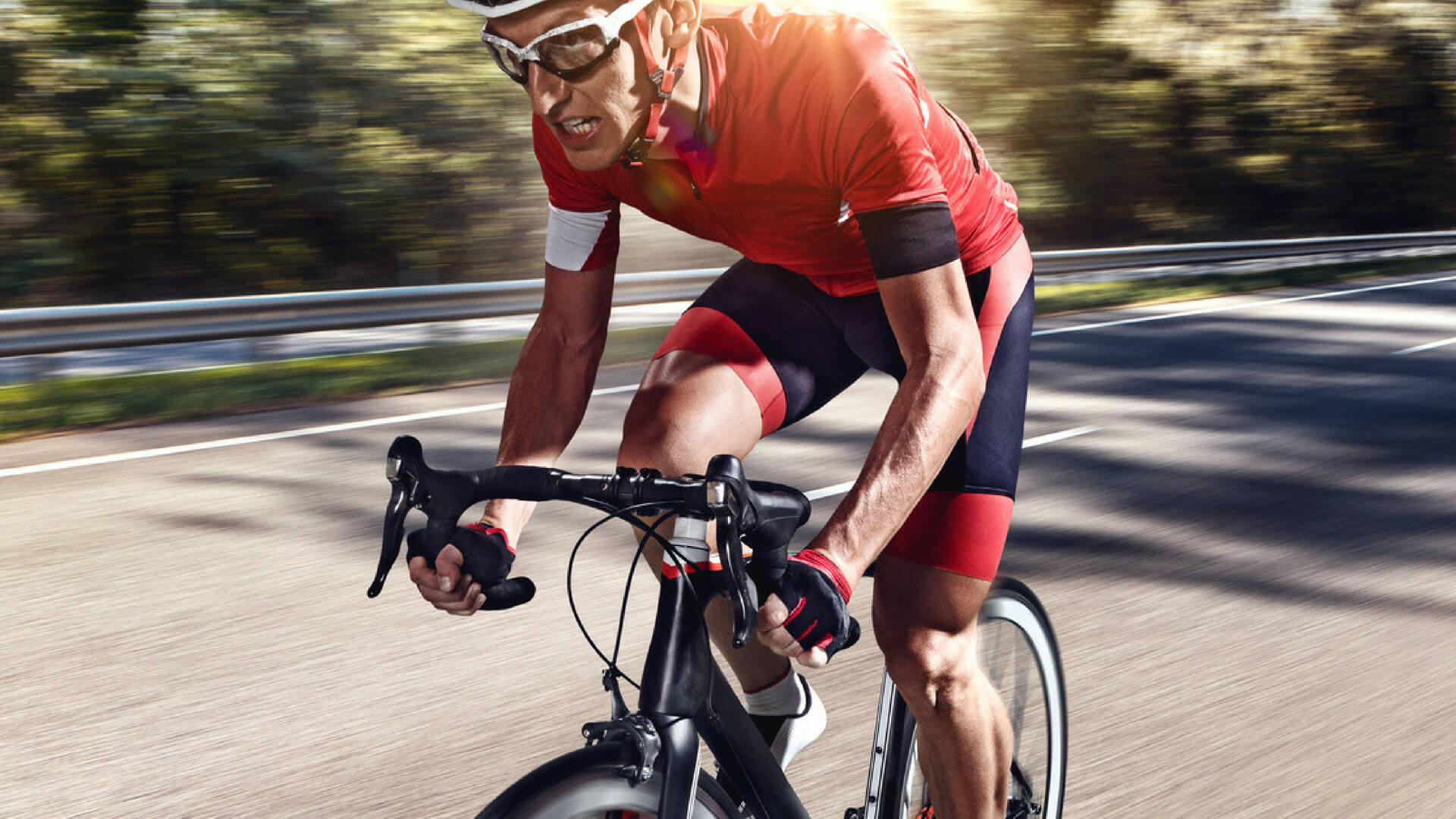 With the Tour de France in full flow, a term that will be on the mouths of all coaches, athletes, fans and the press is lactate threshold. The lactate threshold is intrinsic to endurance sports and arguably the most critical factor in exercise performance; but how much do we really know about it?

To understand lactate threshold, we must first explore lactate. Lactate is a molecule that is both produced and consumed by the body during exercise. It forms as a byproduct in muscle cells when glycogen is broken down (via a process called glycolysis) to produce ATP - a high energy molecule that is required for muscle contraction.

Regrettably, lactate has been maligned in many articles and by many "experts".  While it is true that blood lactate concentration increases with more prolonged and more intense exercise, and it is also true that long duration and high-intensity training inevitably lead to fatigue, it is not true that the fatigue is caused by elevated blood lactate levels.

When the end product of glycolysis (pyruvic acid) is converted to lactic acid, it quickly dissociates by releasing a hydrogen ion (H+) and forming lactate. It is these H+ ions if they are allowed to accumulate, that can cause an acidic environment within muscle cells. This, in turn, may impair muscle contraction and lead to that all too familiar burning or "jelly legs" feeling.

Fortunately, lactate can be "cleared" to prevent its accumulation and concomitant increases in acidity (via H+ ions), thereby delaying fatigue. The clearance of lactate from muscle fibers into mitochondria ( the ‘powerhouses of the cell' responsible for producing energy) is facilitated by specific transporter proteins. Once lactate enters the mitochondria via these transporters, it is recycled back to pyruvate which, through a series of complex molecular cycles, is able to produce more of that all-important ATP, allowing for further muscle contractions.

Within this context, the lactate threshold is commonly defined as the point at which lactate formation exceeds the rate of lactate clearance for fuel/ATP production.
The graph below gives a visual representation of the lactate threshold (circled) as a percentage of an individual's VO2Max - the maximal rate that the heart, lungs, and muscle can effectively utilize oxygen. Notice how once the threshold is reached, there is a steep rise in blood lactate as lactate production exceeds clearance. 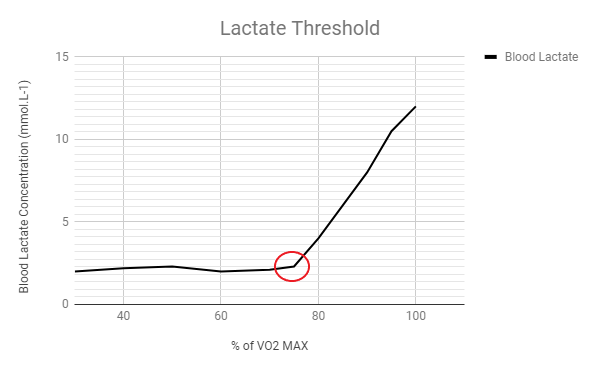 So, if the lactate threshold is so crucial, are there any ways that we can improve it? If we can delay the point at which lactate accumulates and muscles begin to fatigue, then we can, in theory, exercise for longer (and at higher intensities) and burn more calories.

For competitors in the Tour de France, higher lactate thresholds will enable them to climb hills, power through the sprints, and excel in the time trials without getting dropped by their rivals!

Let's now take a look at some of the factors, both genetic and environmental that may affect your lactate threshold.

Of the many genes we analyze for our programs, there are two of particular importance when it comes to the lactate threshold: MCT1 and PGC1A.

Your MCT genes encode transporter proteins, called monocarboxylate transporters (MCTs). As previously mentioned, these are responsible for transporting lactate into the mitochondria, where it can be subsequently used to produce ATP, the energy currency of our cells. Of the different types of MCTs, MCT-1 and MCT-4 transporters are particularly abundant in slow-twitch and fast-twitch muscle fibers respectively. The A allele of the MCT1 gene is associated with higher levels of MCT-1 transporter protein and if you have the AA genotype, you may be at a genetic advantage. This is because you may be able to delay the onset of fatigue (due to H+ accumulation and acidosis) for longer than an individual with the TT genotype.

If you do have the TT genotype, and therefore have a genetically slower lactate clearing potential, don't worry; all hope is not lost! A review of existing research has demonstrated that various types of exercise (continuous, HIIT, resistance) can elicit increased levels of muscular MCT. This applies to individuals of all training status, sedentary and elite alike. Increased MCT expression in muscle will attenuate increases in acidity and offset fatigue. In fact, research suggests that fatigue indices during all-out and intermittent exercise are inversely proportional to MCT1 content - i.e. the more MCT1 you express, the less likely you are to experience fatigue.

PGC-1α (encoded by the PGC1A gene) is a critical component in a process known as mitochondrial biogenesis (the formation of new mitochondria). As previously mentioned, lactate can be "cleared" by mitochondria and used to produce ATP and other molecules needed for energy metabolism. It would make sense then, that a higher number and density of mitochondria will allow for greater lactate clearance and therefore a higher lactate threshold. For the 57% of us with the GG genotype of the PGC1A gene, we have higher levels of the gene that codes for the PGC-1α protein and therefore potentially have higher mitochondrial density and better lactate clearing capability.

Again, if your PGC1A results are AG or AA, and you're concerned about lower levels of PGC-1α: worry not - exercise is once again the solution! Aerobic exercise is proven to increase the production of PGC-1α proteins (up to 40 fold!) and to trigger mitochondrial biogenesis. Accordingly, ensure you are including cardio in your workouts if you want to stimulate the production of new lactate-clearing mitochondria and improve your lactate threshold!

As oxygen is necessary for lactate clearance in mitochondria, factors that affect VO2max (the body's ability to consume and deliver oxygen) will also affect lactate threshold. These factors include: age, gender, fat mass, lean mass, environmental temperature/humidity, smoking, and training status. Although lactate threshold is reported to decline with age, this reduction is likely to result from age-associated declines in VO2 max.

Training to improve the lactate threshold

Lactate threshold training is a popular training method for many endurance athletes. Typically, blood samples are obtained through finger-pricks and blood-lactate is measured as you exercise at progressively higher intensities. When the blood-lactate concentration has increased significantly above baseline (as we saw in the graph above), then you have reached the intensity (heart rate, speed or percentage of VO2max) at which your lactate threshold lies.

So there we have it, the lactate threshold is undeniably crucial in endurance exercise and is something that should not be neglected in training programs. Although some of us are lucky and have gene variants favoring a high lactate threshold, those who are not "genetically gifted" can still train to improve the lactate threshold and delay the onset of that burning sensation in your muscles!

Steve Morehen is an intern at FitnessGenes and a recent graduate of the University of Birmingham where he obtained his BSc in Sport, Exercise and Rehabilitation Sciences. He will return there to undertake his MSc in musculoskeletal aging next year. Steve has experience in writing scientific publications and will continue to write articles for FitnessGenes over the coming months!