Readers are strongly encouraged to visit the Vitamin D Level (GC) trait article for further background information on Vitamin D and its functions in body.

Vitamin D made by our skin and obtained from our diet is converted into the active form of Vitamin D, 1,25 dihydroxy-vitamin D (also known as calcitriol), which functions as an important hormone in the body.

The active Vitamin D hormone binds to a specialised receptor, known as the Vitamin D receptor (VDR), found on the inside of nearly all cells in the body. When Vitamin D binds to the VDR, it triggers various cellular changes that overall help us to:

You can read more about these functions in the Vitamin D Level (GC) trait article.

What are the main forms of Vitamin D?

It’s important to remember that Vitamin D2 and D3 are not biologically active in the body. They must be converted into 1,25 dihydroxy-vitamin D (also known as 1,25(OH)2D or calcitriol, the active form of Vitamin D, in order to have effects in the body.

How is Vitamin D produced by the skin?

Our skin produces Vitamin D3 on exposure to ultraviolet (UVB) radiation in sunlight.

The upper part of our skin, known as the epidermis, contains a cholesterol-like precursor molecule called 7-dehydrocholesterol. This gets converted into pre-vitamin D3 by UVB radiation. 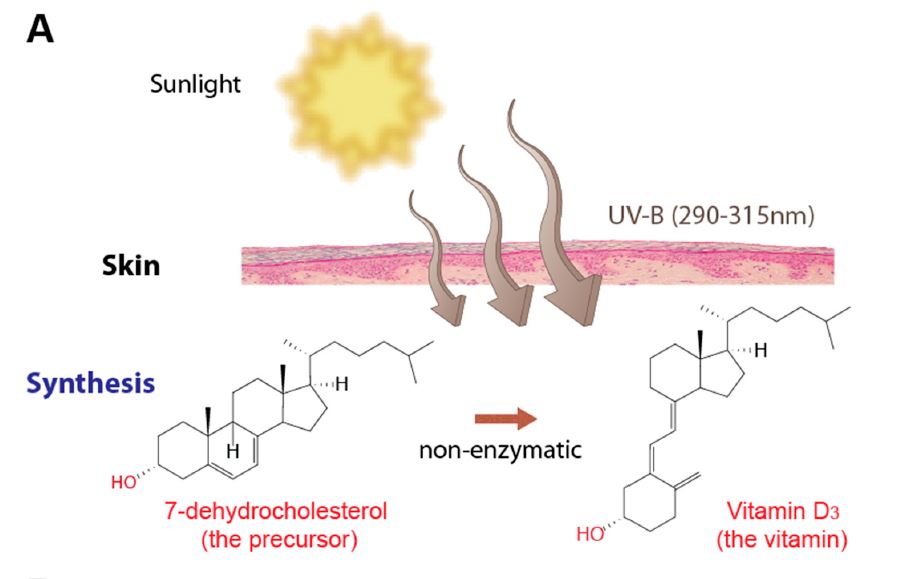 The amount of Vitamin D3 produced by the skin on exposure to sunlight depends on several factors, including:

Latitude, season, and time of day all affect the angle at which the sun’s rays enter the Earth’s atmosphere and penetrate our skin. In scientific terms, we call this the solar zenith angle – which is defined as the angle between the sun’s rays and the vertical.

When the solar zenith angle is 0 degrees, the sun is directly overhead. This is when the most UVB radiation reaches the Earth’s surface and, by extension, our skin. Accordingly, our skin makes Vitamin D most effectively at noon, when the sun is at its highest point.

When the solar zenith angle is 0 degrees, the sun is directly overhead. This is when the most UVB radiation reaches the Earth’s surface and, by extension, our skin. Accordingly, our skin makes Vitamin D most effectively at noon, when the sun is at its highest point.

As the solar zenith angle increases, however, less UVB radiation reaches the earth’s surface (as it absorbed by the ozone layer). Accordingly, at higher latitudes, in Winter months, and during early morning or late afternoon, our skin makes less Vitamin D.

In Caucasian people, studies suggest that the skin produces the equivalent of 10,000-25,000 IU of Vitamin on full-body exposure to sunlight that is enough to produce slight pinkness.

How is Vitamin D converted into its active form?

Vitamin D3 (that we produce from sunlight and obtain from animal products) and D2 (from plant sources) are not biologically active molecules.

In order to have effects in the body, these forms of Vitamin D need to be converted into the active form of Vitamin D: 1α,25-dihydroxyvitamin D (also known as 1-25(OH)2D or calcitriol).

This conversion and activation process is carried out in two stages by enzymes in the liver and kidneys. In the first stage, enzymes in the liver convert Vitamin D2 and D3 into a molecule called 25-hydroxyvitamin D (also known as 25(OH)D or calcidiol). This is the main form of Vitamin D transported in the bloodstream.

One of the key liver enzymes responsible for the first stage of Vitamin D activation is called CYP2R1 (vitamin D 25-hydroxylase).

In the second stage of activation, enzymes in the kidneys convert 25(OH)D into 1α,25-dihydroxyvitamin D (also known as 1-25(OH)2D or calcitriol), the active form of Vitamin D.

CYP27B1 is the major kidney enzyme that catalyses this reaction.

The CYP2R1 enzyme is responsible for the first stage of Vitamin D activation. It converts Vitamin D2 and D3 into 25(OH)D, the main form of Vitamin D in the bloodstream.

The CYP2R1 enzyme is coded for by your CYP2R1 gene.

Variants of your CYP2R1 gene can affect how well you convert Vitamin D2 and D3, thereby influencing your overall Vitamin D levels.

A SNP (Single Nucleotide Polymorphism) in the CYP2R1 gene, designated rs10741657, creates two variants (alleles): the ‘A’ allele and the ‘G’ allele.

The ‘G’ allele is associated with lower expression and activity of the CYP2R1 enzyme. This, in turn, results in less effective conversion of Vitamin D2 and D3 into 25(OH)D.

In line with this, studies have shown that people who carry the ‘G’ allele have lower blood Vitamin D (25[OH]D) levels compared to people with two copies of the ‘A’ allele (i.e. the AA genotype).

For example, in an analysis of 5,656 subjects in the Framingham Heart Study, people carrying the G allele (i.e. those with GG and GA genotypes) had 25(OH)D levels that were 3.7 – 7.6% lower than those with the AA genotype.

[To put these figures in context, a healthy Vitamin D level is considered to be between 75 and 250 nmol/L (30 – 100 ng/ml) according to Endocrine Society guidelines].

What is Vitamin D insufficiency?

Vitamin D insufficiency is defined as having blood Vitamin D (25[OH]D) levels that are suboptimal for bone and overall health in healthy individuals.

Note that this is different to Vitamin D deficiency, which refers to even lower Vitamin D levels that can lead to rickets in children and osteomalacia in adults. Both of these are bone disorders characterised by softened and weakened bones.

The exact blood 25(OH)D levels for Vitamin D insufficiency and deficiency vary according to different groups of experts (see diagram below).

According to the Endocrine Society, the following criteria are used:

Your Vitamin D conversion (CYP2R1) trait uses these criteria in your Insights and Actions.

The ‘G’ allele (rs10741657) of the CYP2R1 gene has been associated with an increased risk of Vitamin D insufficiency.

In a large study of 33,996 people of European descent, researchers found that inheriting each ‘G’ allele was associated with a 1.21 times higher odds of having Vitamin D insufficiency (50nmol/L < 25[OH]D < 75nmol/L).

This relationship may be explained by the effect of the ‘G’ allele on CYP2R1 activity. Lower CYP2R1 activity would result in less conversion of Vitamin D2 and D3 into 25(OH)D, thereby resulting in lower blood 25(OH)D levels and a greater risk of Vitamin D insufficiency.

Your Vitamin D conversion (CYP2R1) trait analyses different variants of your CYP2R1 gene (including the rs10741657) to assess how well you convert Vitamin D2 and D3 into 25(OH)D - the main form of the Vitamin D in the bloodstream. You will fall into one of three groups: