Our body tightly controls calcium levels in the bloodstream. Regulating calcium levels within a narrow range is necessary for effective nerve and muscle function, sustaining bone mineral density, and promoting bone growth. (You can read more about the importance of calcium in your Blood Calcium Level trait).

By helping to maintain adequate calcium and phosphate levels in the bloodstream, Vitamin D supports bone health. By contrast, Vitamin D deficiency can lead to a loss of bone mineral density and the development of osteoporosis in adults, whereby bones become fragile and more susceptible to fracture.

Vitamin D plays an important role in our immune response. Vitamin D is thought to suppress the production of antibodies by B-cells (labelled CD19 on the above diagram) and also inhibit the proliferation of T-cells (e.g. Th1 on the above diagram). It is thought that this suppressive effect could actually be beneficial, as it may help to prevent autoimmunity – whereby the immune system attacks our own healthy cells.

Insulin is a key hormone that allows cells to take up and use glucose from the bloodstream.

Vitamin D is thought to play a role in both the secretion of insulin and tissue sensitivity to insulin. For example, studies suggest that Vitamin D improves insulin sensitivity by causing muscle cells to express more insulin receptors.

By contrast, low Vitamin D levels have been linked to higher blood glucose levels and an increased risk of Type II diabetes.

Vitamin D influences the activity of the Renin-Angiotensin-Aldosterone System. This a system of hormones that regulates blood pressure and blood volume.

On this note, some observational studies have demonstrated a link between low Vitamin D levels and high blood pressure, although the exact relationship is unclear.

What are the different forms of Vitamin D? 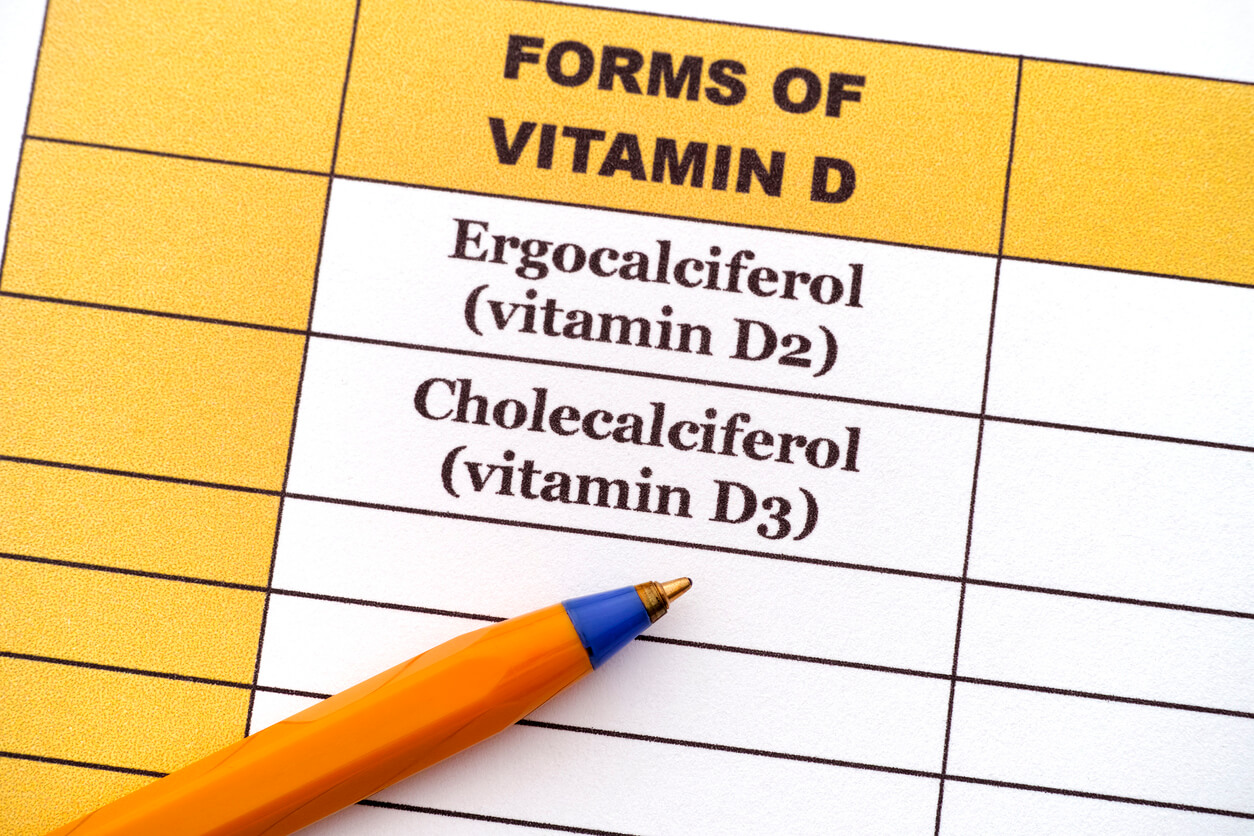 Neither Vitamin D2 nor D3 are biologically active in the body. They must first be converted into the active form of Vitamin D: 1,25 dihydroxy-vitamin D (also known as calcitriol). This molecule is also denoted as: 1,25(OH)2D.

The conversion of inactive into active Vitamin D takes place in two stages. In the liver, Vitamin D3 and D2 are first converted into 25-hydroxy-vitamin D (also known as calcidiol). This molecule is also denoted: 25(OH)D and is the main form of Vitamin D circulating in the bloodstream.

In the second stage of conversion, the kidney converts 25-hydroxy Vitamin D into the active 1,25-dihydroxy-vitamin D (also known as 1,25(OH)2D or calcitriol). This active form of Vitamin D also circulates in the bloodstream. Once produced by the kidney, 1,25(OH)2D acts as a hormone: a chemical messenger that affects the function of other cells. Nearly all cells in the body have a receptor for 1,25(OH)2D, known as the Vitamin D receptor (VDR).

When 1,25(OH)2D binds to VDR, it causes cells to switch on certain genes, while switching others off. These changes (known as changes in gene expression) are responsible for many of Vitamin D’s effects in the body.

Blood levels of 25-hydroxy-vitamin D (or 25[OH]D) are a good measure of your body’s overall levels of Vitamin D.

Therefore, if you’re thinking of taking Vitamin D supplements, it may be better to opt for those containing Vitamin D3.

What is a healthy Vitamin D level?

The blood serum concentration of total 25(OH)D (25 hydroxy-vitamin D) is the most commonly used measure of someone’s Vitamin D level. It reflects the amount of Vitamin D both produced by the skin and obtained from the diet (including supplements).

You may be asking why levels of 25(OH)D and not 1,25(OH)2D, the active form of Vitamin D, are used to assess Vitamin D levels. The reasons for this are because 25(OH)D has a longer half-life in the bloodstream and its levels vary more reliably with changes in Vitamin D intake.

There is still some debate over where the cut-off for low Vitamin D levels should be. The Endocrine Society recommend that people should aim for serum total 25(OH)D level above 75nmol/L (30 ng/ml) to maximise bone health and muscle function.

Sub-optimal Vitamin D levels can be classified (according to the Institute of Medicine criteria) as:

How is Vitamin D transported in the bloodstream?

The vast majority (≈ 85%) of both 25(OH)D and 1,25(OH)2D is transported in the bloodstream bound to a specialized carrier protein known as Vitamin D binding protein (DBP).

Cells in some tissues, such as the kidney, have specialized receptors which bind to DBP in the bloodstream and allow 25(OH)D and 1,25(OH)2D to enter cells.

Most blood tests for Vitamin D levels measure total 25(OH)D. This includes the amount of 25(OH)D (25-hydroxy-vitamin D) that is bound to DBP and albumin, as well as free 25(OH)D.

What is the GC gene?

Studies suggest that variants of your GC gene can affect the ability of DBP to bind to 25(OH)D and 1,25(OH)2D. Furthermore, different GC gene variants may alter the amount of DBP produced by the body.

As a result of these effects, different GC gene variants have been associated with differences in Vitamin D levels.

What are the different GC gene variants?

There are two common SNPs within the GC gene:

Due to differences in their DNA code, the three different alleles (Gc1f, 1s and 2) code for slightly different forms of the Vitamin D binding (DBP) proteins. In particular, the various DBP forms may differ in their ‘binding affinity’ – which is a measure of the strength to which DBP binds 25(OH)D and 1,25(OH)D2.

The different alleles have also been linked to differences in the amount of DBP produced and circulating in the bloodstream. Several studies have found that the Gc2 allele is associated with lower circulating levels of DBP.

Given these effects, your Vitamin D levels (as measured by total 25[OH]D) depend partly on what particular GC alleles you inherit.

What are the different GC genotypes?

We inherit genes in pairs, one from our mother and the other from our father. Given there are 3 different variants or ‘alleles’ of the GC gene (1f, 1s, and 2), we can have one of six possible GC gene combinations (or genotypes):

Your Vitamin D Levels (GC) Trait will inform you of your specific GC genotype and predicted Vitamin D (25[OH]D) Level.

How do the different GC genotypes affect Vitamin D levels?

Several studies have reported differences in serum total 25(OH)D across the six GC genotypes. While the exact results vary from study to study, there is a common finding that people with the 2/2 genotype tend to have lower 25(OH)D levels compared to other genotypes.

For example, a large Norwegian study of 11,704 subjects, known as the Tromso study, found that those with the 2/2 genotype had an average 25(OH)D level of 46.9 nmol/L.

By contrast, those with other genotypes had average 25(OH)D levels ranging from 50.3 to 55.4 nmol/L.

To put these figures in context, a healthy Vitamin D (25[OH]D) level is considered to be between 50 and 125 nmol/L.

The graph below, taken from the MARIE study based in Germany, illustrates this pattern.

These results suggest that individuals with the 2/2 genotype are at greater risk of low Vitamin D levels (i.e. Vitamin D insufficiency and deficiency).

On the plus side, people with 2/2 genotype have been shown to respond more favourably to long term Vitamin D supplementation. For example, one study found that the 2/2 genotype produced much greater increases in serum 25(OH)D levels after taking either 600IU or 4000IU of Vitamin D3 supplements daily over the course of a year.

Why is the 2/2 genotype associated with lower Vitamin D (25[OH]D) levels?

We know that the Gc2 allele may code for a Vitamin D binding protein (DBP) with a lower binding affinity for 25(OH)D. However, we also know that it is free, unbound 25(OH)D that is active in the body.

Another potential explanation is that people with the 2/2 genotype produce lower quantities of DBP.

Some studies which have directly measured levels of DBP in the bloodstream have found that those with the 2/2 GC genotype do in fact have lower levels of circulating DBP. Given that the majority of 25(OH)D circulating in the bloodstream is bound to DBP, lower DBP levels may explain the finding of lower serum total 25(OH)D levels in the 2/2 genotype.

Your Vitamin D Level (GC) Trait tells you your particular GC genotype and uses this genetic data to predict your Vitamin D levels. You will fall into one of the six possible categories: