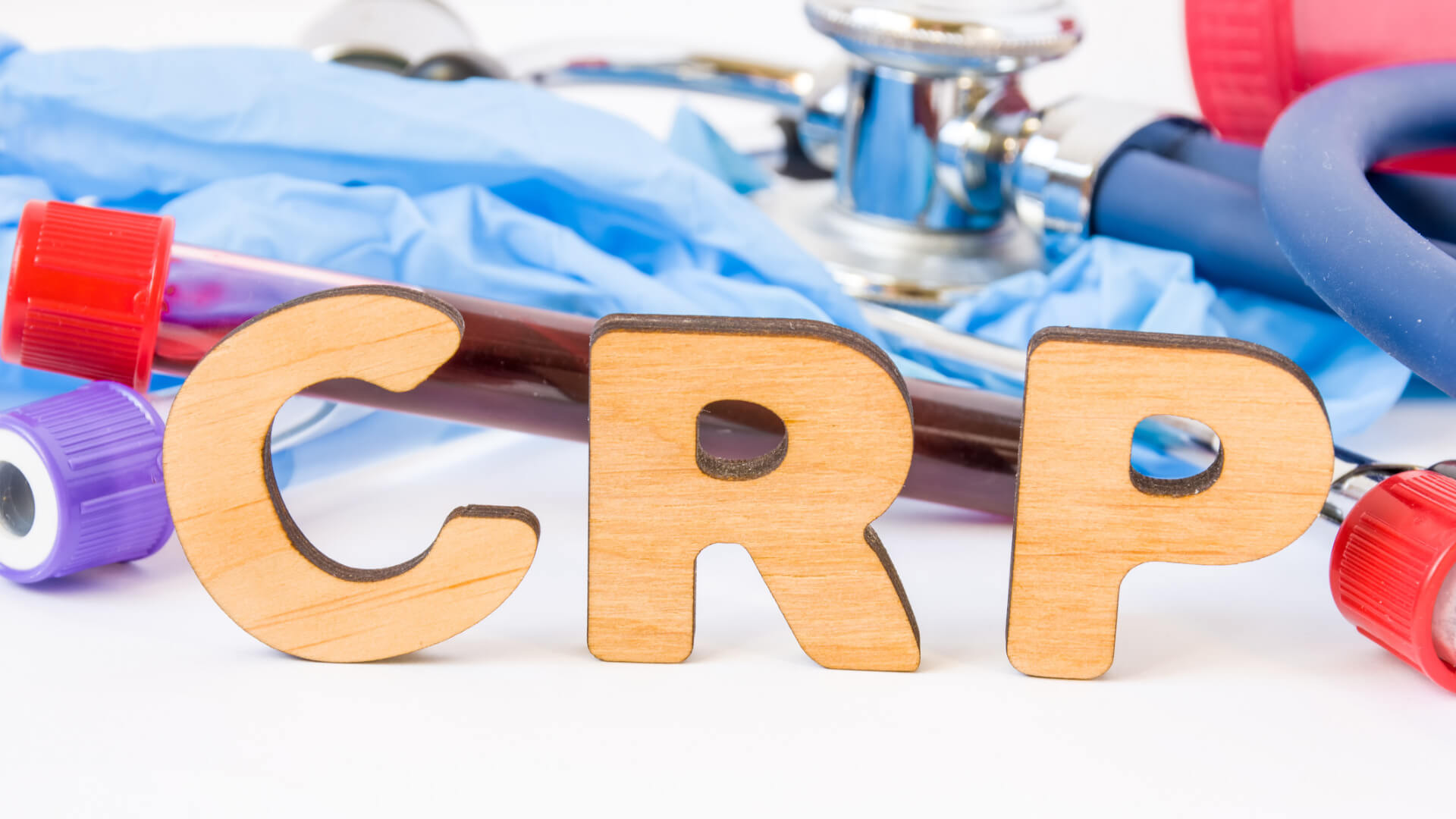 What is C-reactive protein (CRP)?

C-reactive protein (CRP) is a protein released by the liver in response to inflammation. It is also produced by adipose (fat) tissue and endothelial cells that line blood vessels.

CRP belongs to a class of molecules known as acute phase proteins, which are proteins that are quickly released into the bloodstream as part of our immediate immune response to infection, tissue injury, malignant cell growth, and inflammation.

In this respect, the role of CRP is to help white blood cells engulf and destroy bacteria and damaged cells, and to stimulate the production of inflammatory molecules called cytokines.

As CRP is produced in response to inflammation, healthcare professionals use blood levels of CRP as a useful inflammatory marker.

How are CRP levels measured?

A blood test is required to measure CRP levels. There are two main types of CRP test available:

Both of these tests measure levels of the same CRP protein, but the high-sensitivity CRP test is more sensitive to smaller amounts of CRP. This makes it better for detecting the mildly elevated CRP levels seen in low-grade inflammation. 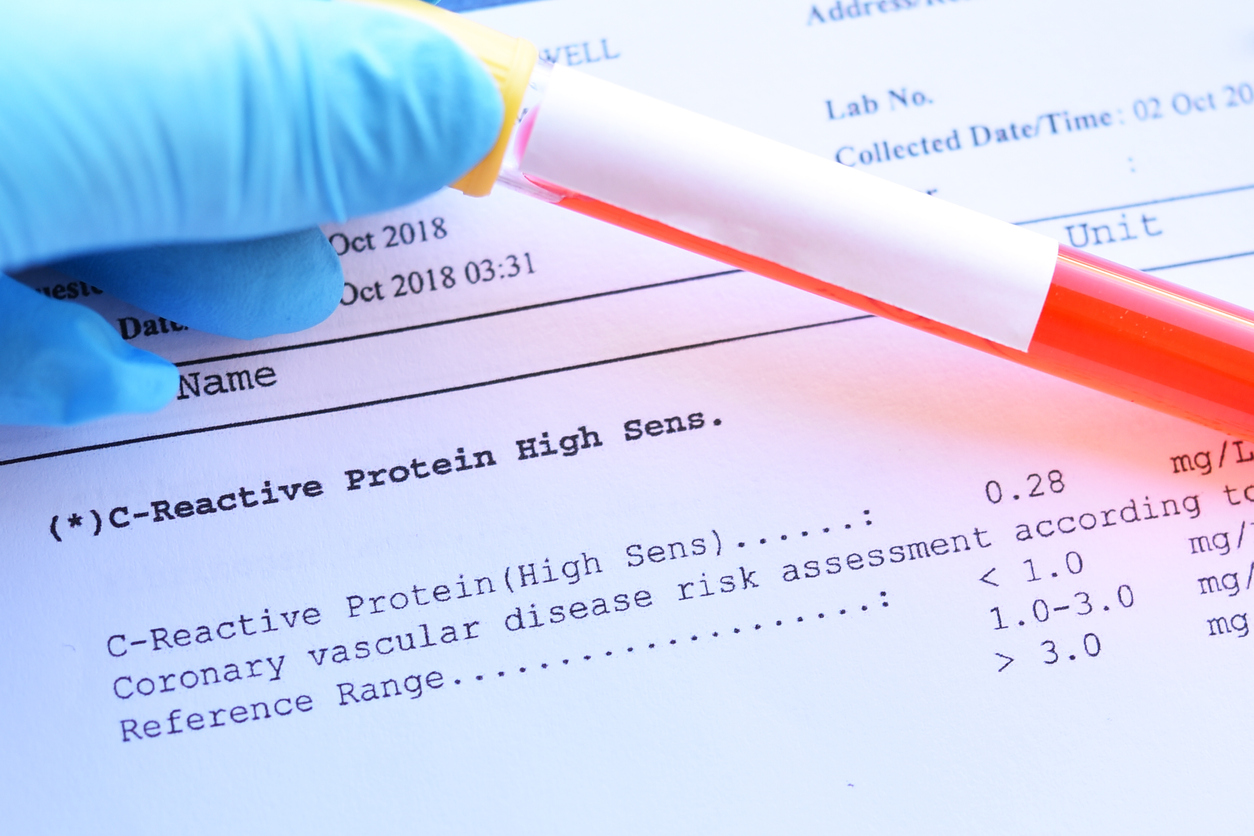 The standard CRP test is able measure CRP levels down to about 2-5 mg/L. (For context, acute inflammation (such as in an infection) typically causes CRP levels to rise above 10 mg/L).

By contrast, hsCRP tests can detect CRP levels as low as 0.3 mg/L.

What is a healthy hsCRP level?

As mentioned earlier, there are two CRP tests. Using a standard CRP test, a “normal” CRP level is considered to be <10 mg/L. However, as explained previously, this test is not sensitive to low amounts of CRP and therefore cannot be used to detect low-grade inflammation.

Using a high-sensitivity CRP (hsCRP) test, a level of < 1 mg/L can be considered healthy.

This figure is based on criteria from the American College of Cardiology and American Heart Association, which link hsCRP levels to risk of cardiovascular disease (including coronary artery disease, stroke, peripheral artery disease and heart failure).

The criteria are as follows: The reason that higher levels of CRP (an inflammatory marker) are associated with a higher cardiovascular risk is likely due to the involvement of chronic inflammation, which can cause damage to blood vessels and promote the build-up of fatty plaques, in the development of cardiovascular disease.

What is low-grade inflammation?

Low-grade inflammation refers to persistent, low-level, chronic inflammation and is characterised by moderate elevations of inflammatory markers (such as CRP and Il-6) in the bloodstream.

We’ve discussed acute and chronic inflammation before in several previous traits, and readers are encouraged to read the Inflammation and Il-6 trait blog for further background.

Briefly, acute inflammation is part of our body’s protective response to tissue injury, infection, and other harmful stimuli. It involves the release of inflammatory molecules (called cytokines) that recruit immune cells to the site of tissue injury.

Importantly, the acute inflammatory response is suppressed after the harmful stimulus (e.g. bacteria, foreign body, harmful chemical) is removed. This process is called resolution and allows tissues to be repaired. By contrast, in chronic, low-grade inflammation, this resolution (or healing) process does not occur, and there is a persistent inflammatory response, with ongoing production of inflammatory cytokines and continued recruitment of immune cells.

Rather than just affecting a local site of tissue injury, oxidative stress from chronic inflammation can cause damage to widespread tissues and organs, including blood vessels, nerves, and liver cells. It’s for this reason that we often describe chronic, low-grade inflammation as systemic inflammation (to differentiate it from localised inflammation).

Whereas acute inflammation can be directly triggered by pathogens (e.g. bacteria) or acute physical and chemical stimuli, chronic, low-grade inflammation is typically activated by longer-term cell damage and cellular stress. In this respect, lifestyle factors that promote cellular stress, such as poor diet, psychological stress, inadequate sleep, and physical inactivity, can all lead to low-grade, systemic chronic inflammation (SCI).

This is illustrated in the left-hand side of the diagram above.

Why is chronic, low-grade inflammation bad for our health?

Damage to cells from chronic inflammation can impair the function of several different tissues and organs. Over time, this can contribute to the progression of various diseases including cardiovascular disease, metabolic syndrome, Type II diabetes, non-alcoholic fatty liver disease, and neurodegenerative disease. For example, chronic inflammation within the linings of blood vessels can promote the development of fatty plaques (atherosclerosis). This, in turn, can lead to heart disease, stroke and other cardiovascular health issues.

Chronic, low-grade inflammation also plays a central role in metabolic disease, such as Type II diabetes. Pro-inflammatory cytokines released during chronic inflammation have been shown to impair insulin signalling in adipose tissue, skeletal muscle, and the liver, which can lead to poor insulin sensitivity and high blood glucose levels.

The process of ageing is also significantly linked to cell damage caused by chronic, low-grade inflammation, as encompassed by the concept of “inflammaging.”

Leptin is a hormone produced by fat cells (adipocytes).

It acts as a signal of how much chemical energy we have stored as fat (adipose) tissue. The more adipose tissue we carry, the higher our leptin levels.

Rather than passively acting as a signal of energy storage, leptin acts to regulate our energy balance by suppressing appetite and increasing energy expenditure.

You can read more about leptin in the Leptin Resistance trait article.

Leptin produced by our fat cells acts as a pro-inflammatory cytokine – it stimulates inflammation and activates various immune cells.

In this respect, it’s thought that leptin serves as a link between our immune response and our nutritional status. For example, inflammation and immune activity are suppressed in malnourished individuals, where fat mass and leptin levels are low. This may be one reason why malnourished individuals have a higher risk of infection.

The flip side of this is that, in people who are overweight and obese, increased leptin levels may contribute to chronic, low-grade inflammation.

On this note, higher leptin levels have been associated with higher levels of inflammatory markers in the bloodstream, including CRP.

What is the LEPR gene?

Your LEPR gene codes for your leptin receptor.

This is the protein to which leptin binds to exert its effects in the body. For example, when leptin binds to the leptin receptor on the surface of immune cells, it stimulates the production of pro-inflammatory cytokines.

Your C-reactive protein levels (LEPR) trait looks at different variants of your LEPR gene, which are created by various SNPs (Single Nucleotide Polymorphisms). Some of these LEPR gene variants are associated with higher CRP (hsCRP) levels.

In the Women’s Genome Health Study, which analysed the genetic data of 6345 healthy American women, a variant of the LEPR gene created by the rs1892534 SNP was linked to higher blood CRP levels.

Similar findings for rs1892534 have been reported in North Indian, Taiwanese, and Filipino study samples.

Another LEPR gene variant, created by the rs6700896 SNP, has been associated with increased hsCRP levels in African Americans.

Higher CRP levels in people with these gene variants may indicate a degree of low-grade inflammation. Furthermore, some evidence suggests that these LEPR gene variants are associated with a greater risk of diseases related to chronic, low-grade inflammation. For example, one study found an association between rs1892534 and rs2211651 SNPs of the LEPR gene and early-onset Type 2 diabetes.

The potential mechanism by which LEPR variants could give rise to elevated CRP levels is unclear. It is possible that LEPR gene variants alter the pro-inflammatory activity of leptin, although more research is needed.

How do lifestyle and other genetic factors affect CRP levels?

Several lifestyle factors have been linked to higher CRP levels, including smoking, physical inactivity, and higher amounts of visceral fat (the type of fat that surrounds internal organs).

Your C-reactive protein levels (LEPR) trait focusses on this last factor. As leptin is secreted by fat cells (adipocytes), people who carry greater amounts of fat tissue tend to have higher levels of circulating leptin. Over time, this can lead to resistance to the effects of leptin, which in turn leads to further increases in leptin levels.

Leptin resistance and higher leptin levels in people who are overweight and obese can therefore promote low-grade inflammation and elevations in CRP levels.

For this reason, in addition to your LEPR gene variants, your trait uses lifestyle data indicative of leptin resistance, including high BMI and wider waist circumference, to calculate your trait result.

You can fill in your lifestyle data by completing the Lifestyle Survey in truefeed.

As well as your LEPR gene, variants of other genes, such as your FTO and GCKR genes, can also increase the risk of leptin resistance and high leptin levels. This, in turn, can elevate CRP levels and contribute to chronic, low-grade inflammation.

Your C-reactive protein levels (LEPR) trait uses data on your LEPR gene variants, other gene variants, and lifestyle survey responses to make a prediction* about your CRP levels.

(*Please note that this is only a prediction based on genetic and lifestyle data. A blood test (hsCRP test) is required to accurately assess your CRP levels.)

You will be placed into one of five categories: