This trait looks at your risk of overeating based on variants of your APOA2 gene.

The science behind this trait is fairly complicated, but the basic idea is that variants of your APOA2 gene can affect your metabolism of tryptophan – an amino acid that regulates energy intake and eating behaviour.

Depending on your APOA2 genotype, you may be more likely to have altered metabolism of tryptophan in response to high intakes of saturated fat. This can then increase your risk of overeating, binge-eating and consuming high-fat foods.

Tryptophan is an essential amino acid that is used to build proteins and to make serotonin.

Serotonin (5-HT), which we encountered before in your Serotonin Synthesis trait, is an important neurotransmitter – a chemical that transmits messages between nerves (including those in the brain and digestive system).

As well as being made into serotonin, tryptophan is also converted into molecules known as kynurenines. Kynurenines have a variety of effects on neurons in the brain and may influence behaviour.

Serotonin relays nerve signals in the brain and central nervous system. It is particularly active in brain networks that control mood, sleep, appetite and eating behaviour.

In addition to acting in the brain, serotonin plays important roles in the digestive system, where it helps to control the movement of intestines (gastrointestinal motility), secretion of enzymes, and immune function. 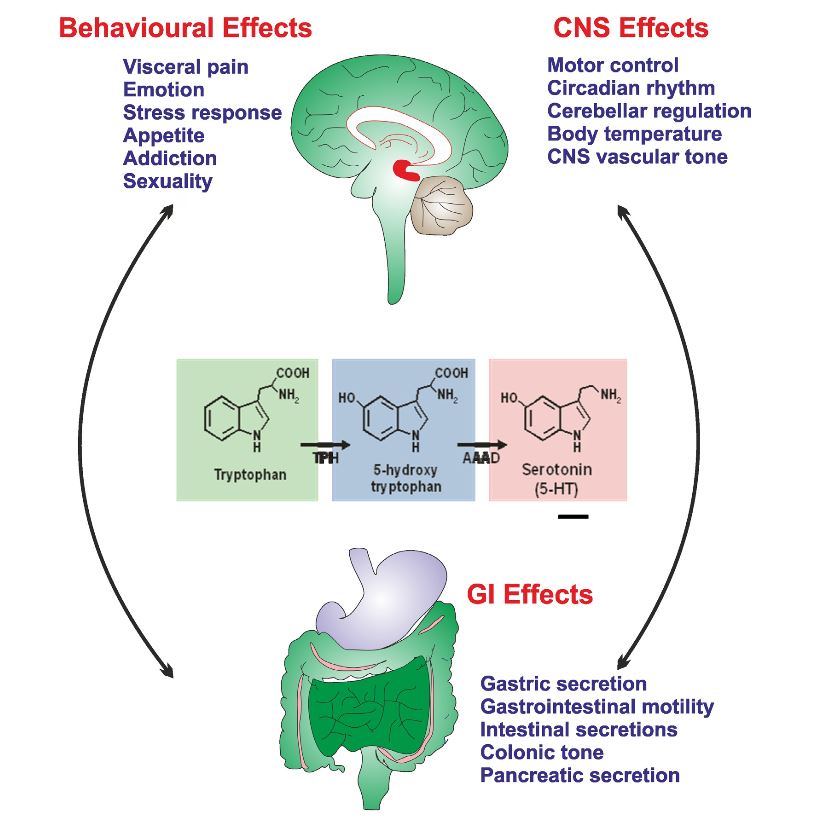 Kynurenines are neuroactive compounds formed from the breakdown of tryptophan.

Although much remains to be understood about kynurenines, current evidence suggests they can affect the activity, function, and survival of neurons in the brain.

Changes in levels of kynurenines in the brain have also been linked to changes in learning, memory, and cognition. Kynurenines may also be complexly involved in the regulation of eating behaviour.

What are good sources of tryptophan? Tryptophan is an essential amino acid, meaning it has to be obtained from our diet as the body cannot make tryptophan itself.

As a building block of various proteins, tryptophan is often found in foods with a high protein content, including:

How is tryptophan metabolised?

As discussed in your Serotonin Synthesis trait, tryptophan is converted by an enzyme called tryptophan hydroxylase (TPH) into another amino acid called 5-HTP. This is then subsequently made into serotonin.

Rather than being entirely made into serotonin, however, over 90% of tryptophan is actually broken down in a different metabolic pathway known as the kynurenine pathway. In this pathway, tryptophan is converted into a molecule known as kynurenine. This is then further broken down by various enzymes into other metabolites, such as kynurenic acid, 3-hydroxykyurenine, and quinolinic acid.

Kynurenine and its various metabolites are collectively known as kynurenines. As mentioned earlier, rather than being inactive metabolites, kynurenines are active compounds that can change the activity and function of neurons.

In particular, kynurenine formed in the rest of the body can pass into the brain and be further metabolised into other kynurenines (e.g. kynurenic acid, quinolinic acid) that affect neuronal activity. This may then have a wider effect on behaviour, mood, and cognition.

Given these effects, changes in tryptophan metabolism can have a significant influence on eating behaviour and may drive overeating, binge eating and food cravings.

Serotonin is a key neurotransmitter in brain circuits that regulate food intake and gut satiety (feelings of fullness after eating).

Very broadly speaking, increased serotonergic activity and/or availability of serotonin in the brain is linked to greater satiety and reduced food intake (and vice versa).

On this note, drugs that increase serotonin availability in the brain (such as SSRIs – Selective Serotonin Reuptake Inhibitors) are shown to reduce food cravings and food intake.

Conversely, depletion of serotonin in the brain has been linked to overeating, weight gain, and increased consumption of highly calorific foods.

Kynurenines produced by kynurenic pathway are capable of changing the activity of neurons in the brain.

In studies of humans, increased amounts of kynurenines in the bloodstream have been linked to food craving, in particular craving of carbohydrates. The underlying mechanism behind this relationship is unclear. Again, it is possible that kynurenines have a direct effect on brain circuits that control appetite, food intake and reward.

APOA2 is the gene that encodes a protein called apolipoprotein A2.

We’ve encountered this gene and protein before in your Saturated Fat Response (APOA2) trait. Readers are encouraged to visit that trait article for further background information.

As described in the aforementioned article, Apolipoprotein A2 is a key component of HDL lipoprotein particles that transport fat in the bloodstream to be metabolised in the liver. APOA2 therefore plays an important role in fat metabolism.

The APOA2 gene and Apolipoprotein A2 protein are also complexly involved in amino acid metabolism, including the metabolism of tryptophan and branched chain amino acids (BCAAs).

What are the different APOA2 gene variants?

As we inherit alleles in pairs, one from our mother and one from our father, we can have one of three possible APOA2 genotypes:

As we explored in your Saturated Fat Response (APOA2) trait, individuals with the ‘CC’ genotype are more susceptible to weight gain when following a diet that is high in saturated fat.

As explained in the following sections, those with the ‘CC’ genotype are also likely to have altered metabolism of tryptophan with high intakes of saturated fat. This, in turn, may heighten overeating risk in this group of people.

Studies suggest that, compared to those with TT and CT genotypes, people with the CC genotype are more likely to have altered or dysregulated tryptophan metabolism, particularly after consuming diets with high amounts of saturated fat.

Such changes to tryptophan metabolism may result from differences in the way the APOA2 gene is expressed (i.e. switched on and made into the apolipoprotein A2 protein) in response to a high saturated fat intake.

Subjects were either following a diet with a high (≥22 g per day) or low (<22g per day) intake of saturated fat.

As the box plot below illustrates, people with the CC APOA2 genotype showed lower APOA2 expression compared to other genotypes, but only when following a diet high in saturated fat. The same study (described above) also looked at how the different APOA2 genotypes are related to changes in tryptophan metabolism.

More specifically, the researchers looked at differences in levels of kynurenines produced as tryptophan is broken down in the kynurenine pathway.

As the box plots below illustrate, people with the CC genotype had significantly lower levels of the kynurenines, kynurenate (kynurenic acid) and xanthurenate (xanthuric acid), when following a high saturated fat diet. Lower levels of kynurenines suggest that people with the CC genotype experience changes in tryptophan metabolism in response to high intakes of saturated fat, with less tryptophan broken in the kynurenine pathway.

It is thought that such changes in tryptophan metabolism in the kynurenine pathway may lead to changes in levels of both kynurenines and serotonin in brain circuits that control appetite, satiety, and food intake. This may then promote overeating behaviour.

As we explored in the Saturated Fat Response (APOA2) trait, individuals with the CC genotype are at a greater risk of weight gain and obesity when following a diet that is high in saturated fat.

Part of this increased risk may be explained by changes in eating behaviour, in particular a greater susceptibility to overeating.

On this note, an analysis of 1078 men and women enrolled in the GOLDN (Genetics of Lipid Lowering Drugs and Diet Network) study found that those with the CC genotype tend to eat more in general, consuming 200 kcals more per day compared to those with CT and TT genotypes.

As shown in the graphs below, the study also found that people with CC genotype have a higher total fat intake, with fat also forming a significantly greater proportion of total calorie intake. Whereas fat made up 37.2% of daily calorie intake in people with CT and TT genotypes, it accounted for 38.6% of daily calories in those with the CC genotype. These findings suggest that this group are more prone to eat calorie-dense, high-fat foods.

Studies suggest that individuals with the CC genotype are more likely to engage in behaviours that increase the risk of overeating.

One study of overweight and obese subjects in southern Spain looked at behaviours that are established to be barriers to weight loss. The study revealed that those with the CC genotype are significantly more likely to skip meals and less likely to plan meals in advance.

Both of these behaviours are known to contribute to overeating. For example, skipping meals increases your risk of binge eating later on. “Haphazard meal planning” is also shown to be positively correlated with BMI.

In addition to eating a greater quantity of food, meal skipping and failure to plan meals also cause people to eat poorer quality, less healthy meals. For instance, ensuring you get enough micronutrients from fruit and vegetables (which are often perishable) may require some element of forward planning. Furthermore, meal skipping has been associated with obtaining a greater proportion of daily calories from fat.

Your Overeating Risk (APOA2) Trait analyses variants of your APOA2 gene (created by the rs5082 SNP) and will classify you into one of two major risk groups: