What is Vitamin C?

Vitamin C is also known as (L-) ascorbic acid. It is an essential, water-soluble vitamin that we need to obtain from our diet as we are incapable of making it ourselves.

Vitamin C plays a number of key roles in the body, including: making collagen (the main structural protein of tendons, ligaments and skin), producing neurotransmitters and protecting against oxidative stress.

Why is Vitamin C important?

Vitamin C functions as a cofactor for several important enzymes.

Cofactors are substances needed for enzymes to function effectively and carry out chemical reactions in the body. The enzymes requiring Vitamin C as a cofactor are involved in:

Collagen is a protein that gives bone, skin, muscle tendons, cartilage, blood vessel walls and other connective tissue its structure. It also is used in the process of wound healing.

Two enzymes used in the synthesis of collagen include prolyl hydroxylase and lysine hydroxylase. Both these enzymes require Vitamin C to function properly.

If someone fails to consume enough Vitamin C in their diet, production of collagen may become impaired. This can cause weakening of blood vessel walls, skin, connective tissue, and bone. It’s for this reason that acute Vitamin C deficiency (caused by a Vitamin C intake less than 10mg per day) can lead to symptoms of scurvy such as bleeding, poor wound healing and tooth loss.

Carnitine is an amino acid that plays an important role in energy production from fats.

More specifically, carnitine helps to shuttle fatty acids (one of the major building blocks of fat) into mitochondria (the powerhouses of the cell). Once inside mitochondria, fatty acids can be used as fuel to generate chemical energy in the form of ATP. This process of getting energy from fatty acids is known as beta-oxidation. You can read more about this process in the Fat metabolism (β-oxidation) article.

Two enzymes used in the synthesis of carnitine, trimethyllysine hydroxylaseand γ-butyrobetaine hydroxylase, require Vitamin C as a cofactor. Vitamin C is therefore crucial in allowing us to derive energy from fats.

Noradrenaline (norepinephrine) is an example of a neurotransmitter – a chemical that transmits signals between nerves.

Vitamin C is required to make noradrenaline, as it is used a cofactor by the enzyme dopamine β-monooxygenase, which converts dopamine into noradrenaline.

Switching genes on and off

Vitamin C is a cofactor for several enzymes that act to switch genes off (through a mechanism known as DNA demethylation). In this respect, Vitamin C is important for regulating gene expression.

Vitamin C as an antioxidant

In addition to acting as a cofactor, Vitamin C is a potent antioxidant. As we learned in the previous Oxidative Stress Risk (NQO1) trait, antioxidants are substances that help to neutralise highly reactive, damaging substances called free radicals and Reactive Oxygen Species (ROS). By neutralising and preventing the accumulation of free radicals and ROS, Vitamin C helps to guard against oxidative stress. On this note, some studies suggest that higher intakes of Vitamin C are linked to a lower risk of cardiovascular disease and certain cancers, both diseases related to oxidative stress.

How are levels of Vitamin C in the body controlled?

The amount of Vitamin C in our tissues and bloodstream is tightly regulated. In this respect, there are three main processes that affect Vitamin C levels in the body:

The rate of three above processes controls how much Vitamin C from our diet ends up in our body. We’ll explore each process individually in the following sections. Vitamin C (ascorbic acid) in our diet doesn’t need to be broken down before it is absorbed. In fact, it can diffuse passively into our bloodstream in the mouth and stomach.

Under normal conditions, however, we generally absorb Vitamin C in our intestines, particularly the latter section of the small intestine (known as the ileum).

Cells lining the insides of our intestines, known as enterocytes, have specialized transport proteins that actively move Vitamin C from the lumen (where digested food passes) into the bloodstream. 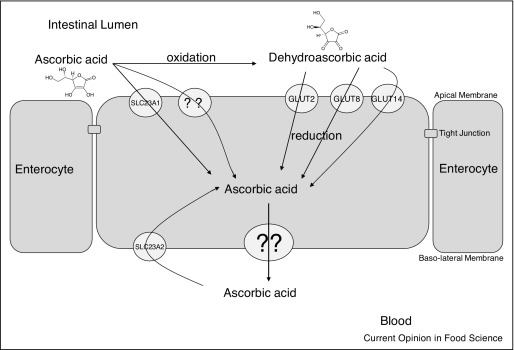 One of the main transport proteins present in our intestinal cells is SVCT1 (sodium dependent vitamin C transporter 1). This moves Vitamin C (in the form of ascorbic acid) along with sodium ions into enterocytes. (Note that the diagram below annotates the SVCT1 transporter as SLC23A1 – the gene that encodes the SVCT1).

How much Vitamin C is absorbed from food?

The take home point here is that higher oral doses of Vitamin C will not necessarily find their way into your bloodstream and tissues. As the graph below shows, levels of Vitamin C (ascorbic acid) in the blood plasma start to plateau beyond doses of about 200 mg per day. 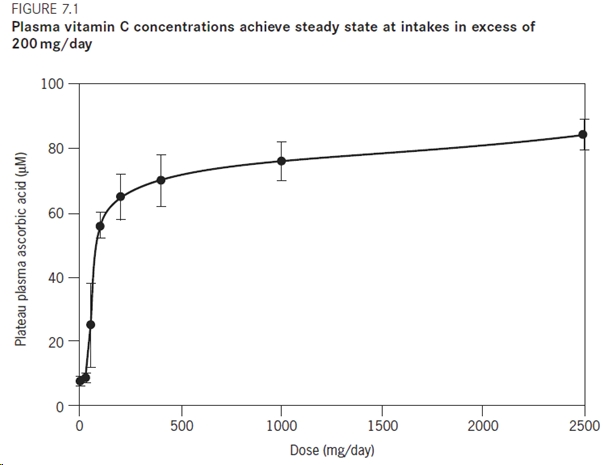 Furthermore, Indeed, high intakes of Vitamin C may lead to the accumulation of unabsorbed Vitamin C within the intestines and gastrointestinal tract. This may cause digestive discomfort, abdominal cramps, nausea and diarrhoea.

Currently the Tolerable Upper Intake Level for Vitamin C (i.e. the maximum intake per day that is unlikely to cause adverse effects) is 2 g (2000 mg).

Once in the bloodstream, Vitamin C can be distributed to various tissues in the body, such as the brain, skeletal muscle, liver and adrenal glands. The cells of these tissues have another specialized transporter called SVCT2 (sodium dependent Vitamin C transporter 2), which moves Vitamin C into cells.

After being shuttled into cells, Vitamin C can be used for its various functions e.g. making collagen. For cells to carry out these functions effectively, they must have an adequate supply of Vitamin C circulating in the bloodstream.

One of the main functions of the kidney is to “filter the blood,” excreting waste products and metabolites in urine, but reabsorbing substances that the body needs.

Vitamin C is one such substance that is filtered out of and reabsorbed back into the blood. This process is important in the regulation of stable Vitamin C levels in the bloodstream. In turn, this ensures enough Vitamin C is available to other tissues.

How do kidneys filter and reabsorb Vitamin C?

Our kidneys are specially designed for the process of filtering and reabsorbing, with each kidney being composed of around a million individual filtration units called nephrons. Within a nephron, blood flows through a network of capillaries known as the glomerulus. As blood flows through the glomerulus, it is subject to high pressure. This forces various substances (including water, waste products [e.g. urea], electrolytes [e.g. calcium ions] and Vitamin C) out of the blood and into a structure called the Bowman’s capsule. This process is known as filtration (step 1 in the diagram below).

Once filtered into the urine, various substances (including Vitamin C) are reabsorbed back into the blood. This process, called reabsorption (step 2 in the diagram below). Vitamin C, in particular, is largely reabsorbed in the proximal convoluted tubule. Cells lining this structure, known as renal epithelial cells, express the SVCT1 (sodium dependent vitamin C transporter 1), which transports Vitamin C from the urine and back into the bloodstream. 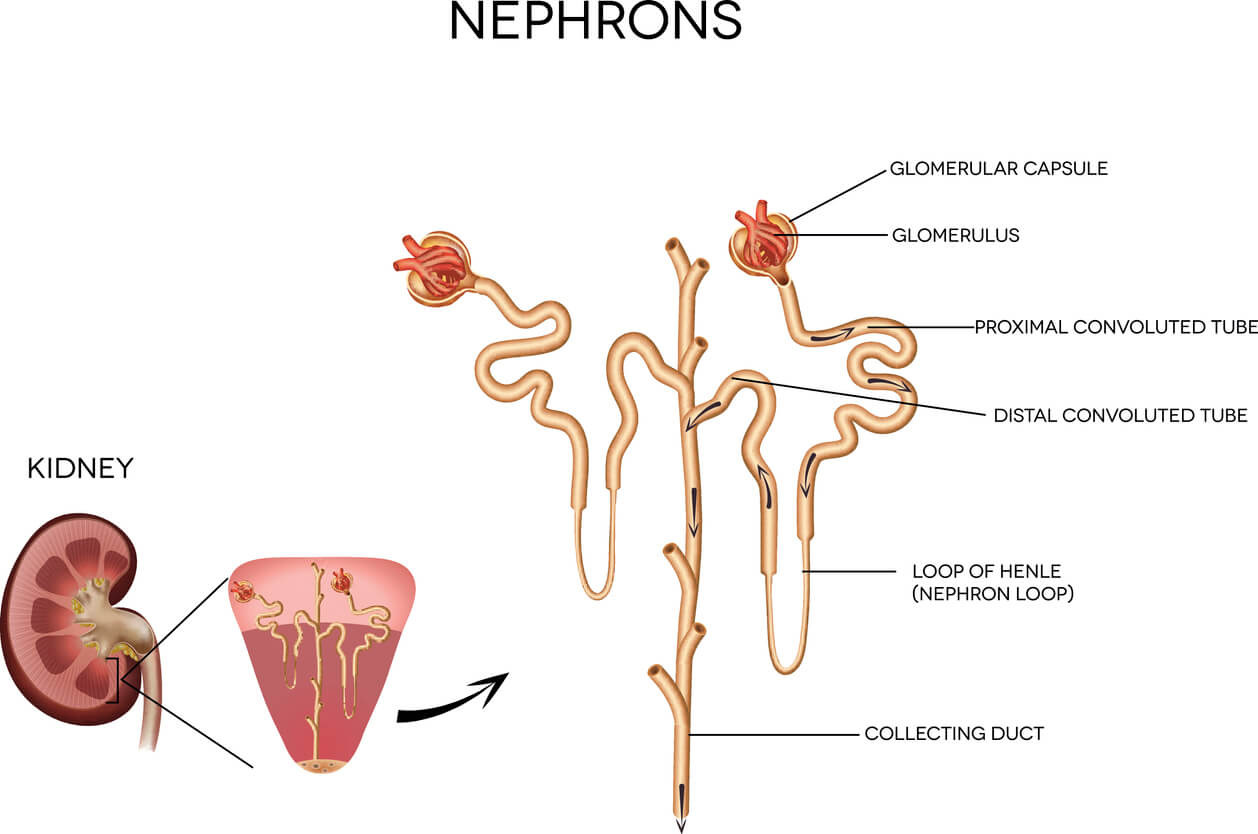 SLC23A1 is the gene that codes for the SVCT1 (sodium dependent Vitamin C transporter 1) protein.

As explained in previous sections, SVCT1 is responsible for the absorption and reabsorption of Vitamin C in the intestines and kidneys respectively.

Studies suggest that variants of the SLC23A1 gene can negatively affect the function of the SVCT1 protein. This, in turn, reduces the renal reabsorption of Vitamin C, which may lead to lower blood levels of Vitamin C.

Several different SNPs (Single Nucleotide Polymorphisms) of the SLC23A1 gene are shown to affect the ability of the SVCT1 protein to transport Vitamin C.

As a result of these SNPs, reabsorption of Vitamin C into the bloodstream by the kidneys may be impaired. This can lead to lower blood plasma levels of Vitamin C. In turn, this reduces the supply of Vitamin C to tissues such as the brain, skeletal muscle and adrenal glands.

Some SLC23A1 SNPs are very rare and are only carried by a small percentage of the global population. To adopt the scientific lingo, we say that gene variants (or alleles) created by these SNPs have a low allele frequency.

Other SNPs of the SLC23A1 gene are more common, and the resulting gene variants (alleles) occur within a higher percentage of the global population.

Your trait analyzes both rare and common SLC23A1 variants.

Generally speaking, these rare variants are only present in less than 10% of the global population. (In scientific terminology, we say that they have allele frequencies of less than 0.1)

The graph below shows the allele frequencies of the four rare SLC23A1 gene variants analysed in your trait. Allele frequencies can be expressed as decimals or percentages. In this graph, a minor allelic frequency of 0.1 means that the rare gene variant is present in 10% of the population studied. This SNP causes a change in the DNA sequence from the letter ‘C’ to the letter ‘T’. This creates a SLC23A1 gene variant that codes for a SVCT1 protein with reduced function. In vitro studies of cells have shown that this variant is associated with 40-50% reduced transport of Vitamin C.

This SNP creates an SLC23A1 gene variant linked to a 40-50% decrease in Vitamin C transport by the SVCT1 protein (based on in vitro studies of cells).

This SNP causes a single letter change in the DNA sequence from ‘A’ to ‘G’. As a result of this change, the resultant SVCT1 transport protein has a different structure and is less effective at transporting Vitamin C. In vitro studies have shown this variant can cause a 75% reduction in Vitamin C transport.

This SNP causes a change in the DNA sequence from the letter ‘G’ to the letter ‘A’. The ‘A’ allele created by this SNP codes for a SVCT1 protein that is 40-50% less effective at transporting Vitamin C. These common variants are present in approximately 32-35% of the global population. Again, bear in mind that there is considerable variation in the frequency of these common alleles between different ethnic populations (e.g. European, African American, East Asian).

This SNP creates two different variants (alleles) of the SLC23A1 gene: the ‘A’ allele and the ‘G’ allele.

Studies have shown that the ‘G’ allele is associated with lower plasma Vitamin C levels. For example, an analysis of 1046 subjects in the Toronto Nutrigenomics and Health Study found that those with one or two copies of the ‘G’ allele had significantly lower Vitamin C levels (26.8 and 24.4 micromol/L respectively) than those with two copies of  the A allele (29.7 micromol/L).

Again, these figures show that carrying two copies of the risk ‘C’ allele is associated with greater decrements in plasma Vitamin C levels compared to carrying one copy.