Your latest Serotonin Synthesis trait analyzes how effectively you produce (or 'synthesize') serotonin.

This has an effect on the function and activity of your brain and digestive system.

It is a neurotransmitter (i.e. a nerve communication molecule) involved in the regulation of our mood and emotions, including feelings of anxiety, surprise and happiness.

Serotonin’s actions are not just restricted to the brain, it plays an important role in our enteric nervous system – the network of nerves that controls the function of our gut.

In addition to acting as neurotransmitter, serotonin also acts as a hormone – a chemical signal that is transported in the bloodstream. Cells lining our digestive system produce serotonin, which then enters the bloodstream, where it has an effect on blood clotting, wound healing and blood flow.

Within the gut itself, serotonin plays a role in the movement of our intestines, secretion of enzymes and immune function.

Alongside dopamine, adrenaline, noradrenaline and histamine, serotonin belongs to a class of chemically-related neurotransmitters known as monoamines.

What are the roles of serotonin?

Serotonin is a key neurotransmitter in the brain and spinal cord (collectively termed our central nervous system), as well as in our enteric nervous system (the network of nerves that control our gut).

Neurotransmitters are chemicals that transmit a signal from one nerve (or neuron) to another, across a gap called a synapse. 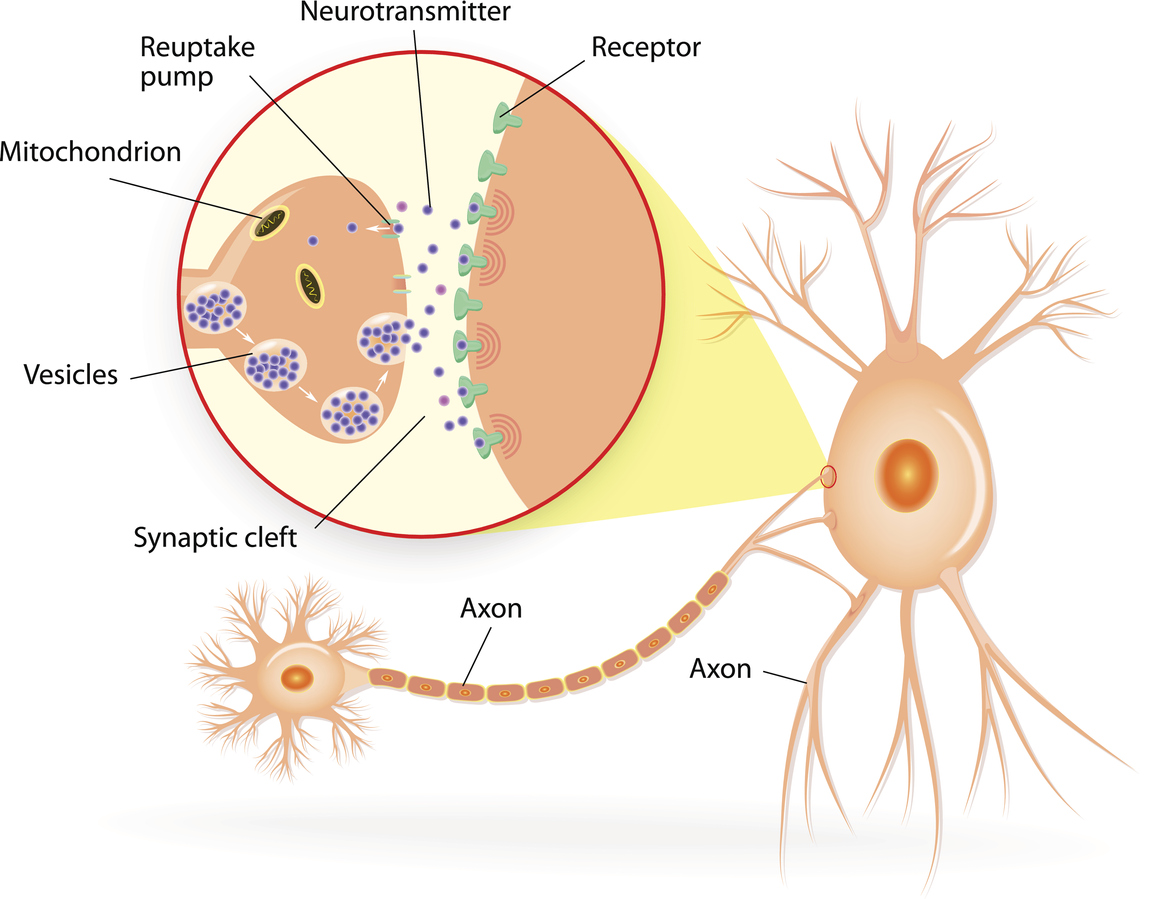 When a serotonergic nerve is stimulated, serotonin is released from special storage chambers called synaptic vesicles. Serotonin then travels across the synapse (or synaptic cleft) and binds to receptors on a receiving or post-synaptic nerve. The act of serotonin binding to receptors activates the post-synaptic neuron, and the nerve impulse is conducted onwards. In this way a signal is passed from one neuron to another.

In the popular press, serotonin is often inextricably linked with feelings of happiness.

One key area involved in processing emotions is our limbic system – a network of interconnected structures deep within the brain that register and respond to emotional stimuli, e.g. a snake, or a smiling face. The limbic system is particularly rich in serotonergic neurons (nerves that use serotonin), which become activated when we’re exposed to emotional stimuli and experience various emotions.

Furthermore, changes in serotonin levels and, thereby, the activity of serotonergic neurons in the brain, affect the way we process and experience emotion.

For example, studies show that increased activity of serotonergic neurons is associated with enhanced recognition of both happy and fearful facial expressions.

Serotonin is also heavily involved in our mood. Mood, which is different from emotion, refers to our predominant emotional state over a longer time period.

Mental illnesses that affect mood, such as depression and anxiety disorders, are associated with changes in the function and activity of serotonergic brain circuits.

Similarly, drugs such as antidepressants, which increase activity in serotonergic brain circuits, can help elevate our mood.

These cognitive functions are carried out, in part, by networks of serotonergic nerves (neurons) that are distributed widely across the brain.

For example, networks of serotonergic nerves that project from a brain structure called the hippocampus to our cortex (the outer layer of brain) are thought to subserve our ability to learn and remember.

Serotonin both directly and indirectly affects our sleep/wake cycle.

It is a complicated relationship, but it’s generally thought that serotonin acting directly within the brain promotes wakefulness.

By contrast, serotonin also gets converted to melatonin – our body’s natural sleep hormone - and this makes us feel sleepy. To read more about melatonin, check out the Night-time Glucose Regulation (Melatonin) blog.

To simplify things, we can say that we require a healthy balance of serotonin and melatonin to ensure we get a good night’s sleep.

Whether or not we feel full is influenced by more than just how much food is physically churning away in our stomach.

Our brains have complex networks of neurons that control our appetite, desire for food, satiety (feelings of fullness) and food intake. Serotonin interacts with these brain networks to regulate how much food we eat.

As explained in the Leptin Resistance blog, many of these appetite-controlling circuits involve a brain structure called the hypothalamus.

Our hypothalamus has a specialized group of neurons (called POMC neurons) that, when stimulated, suppress our appetite. Serotonin can directly activate these neurons, thereby curbing our appetite and reducing our food intake.

In addition to POMC neurons, our hypothalamus contains another set of neurons (called AgRP neurons) that do the exact opposite – they increase our appetite when activated. Serotonin inhibits these neurons, which also reduces food intake.

Did you know our gut has its own nervous system, sometimes referred to as our ‘second brain?’

The enteric nervous system is the large network of nerves that controls movement of our gastrointestinal tract (a process called peristalsis), secretion of digestive enzymes, local blood flow to the gut, and the immune function of our digestive system, including the composition of bacteria living in our gut (our gut microbiome).

Just as it facilitates communication between neurons in the brain, serotonin is also a key neurotransmitter for nerves of our enteric nervous system.

Serotonin therefore plays an important role in the digestion and absorption of food and our overall gut health. 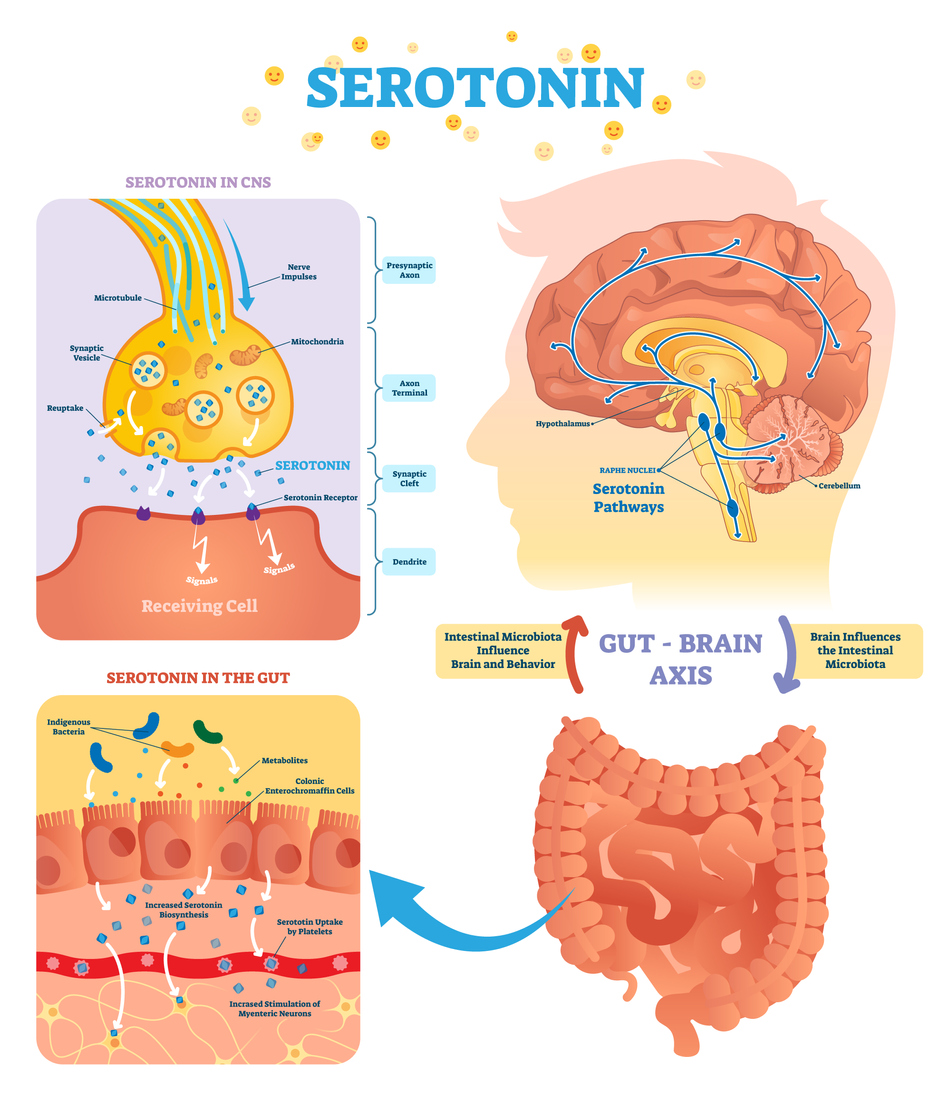 As well as nerves in the enteric nervous system, our intestinal lining also produces serotonin. Our gut has specialized cells called enterochromaffin cells, which secrete serotonin directly into the intestines. This stimulates the movement of our bowels and also the production of mucus. Mucus acts both as lubricant for passing food and as a protective barrier for our gut.

Serotonin released by our enterochromaffin cells does not directly facilitate communication between nerves and therefore is not classified as a neurotransmitter. Instead, it is classed as a paracrine hormone – a chemical signal (hormone) that acts on nearby cells (paracrine).

Serotonin produced by enterochromaffin cells in the gut eventually finds its way into our bloodstream, where it is taken up by blood cells called platelets.

Platelets are tiny cells (so-called because they look like small dinner plates) that help to form blood clots. If you’ve ever cut yourself shaving, you’ll notice that the bleeding soon stops. This is because platelets move to the cut and plug the hole in the blood vessel wall – a process facilitated by serotonin.

When platelets release serotonin, it causes other platelets to accumulate and form a clot (a process known as platelet aggregation).

The release of serotonin by platelets also causes narrowing of local blood vessels (vasoconstriction), which helps to reduce bleeding.

Where is serotonin made?

Within the brain and central nervous system, where serotonin acts as a neurotransmitter, serotonin is made by nerve endings.

In the gut, 90% of serotonin is produced by enterochromaffin cells that line the intestines. This is the hormone form of serotonin.

The remaining 10% of serotonin in the gut is produced by nerve endings within the enteric nervous system, where serotonin acts as a neurotransmitter.

How is serotonin made?

Serotonin is derived from the amino acid tryptophan.

Amino acids are the building blocks of proteins, 9 of which are classified as essential amino acids – meaning our bodies cannot produce them ourselves, so we must obtain them from our diet. Tryptophan is one such essential amino acid. It is found in foods such as eggs, poultry, beans, and legumes.

Studies have shown that supplementing your diet with tryptophan can increase the production of serotonin.

Tryptophan is converted into serotonin (5-HT) in two stages. 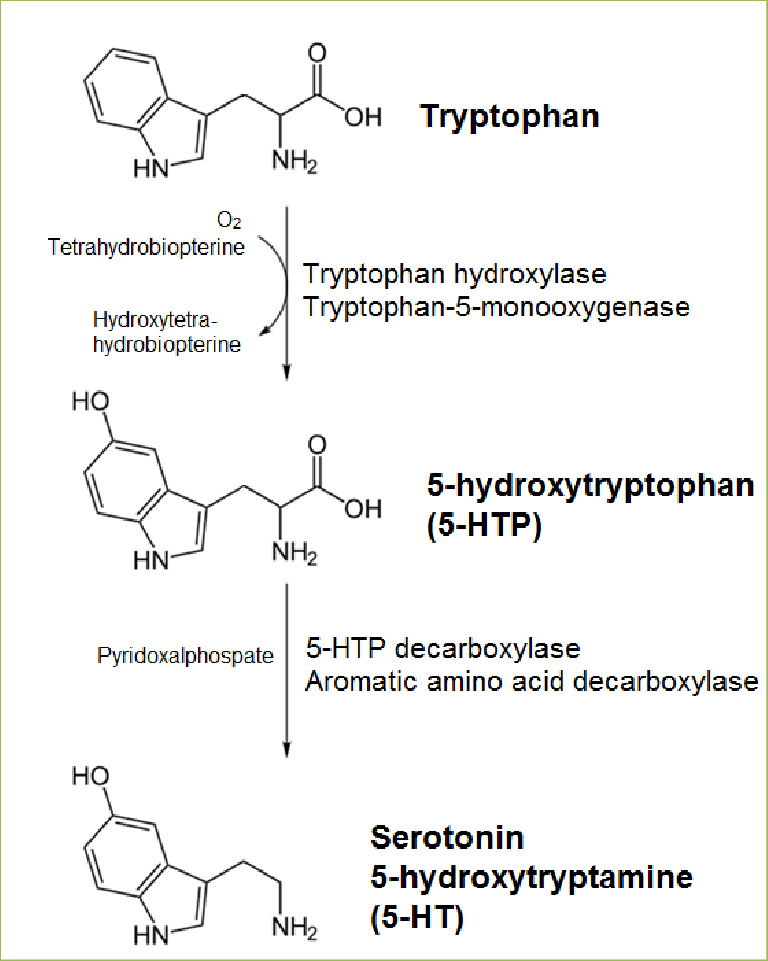 In the first stage, tryptophan is converted into another amino acid called 5-HTP (5-hydroxytryptophan). This reaction is catalyzed (sped up) by the enzyme tryptophan hydroxylase (TPH).

We actually have two forms of TPH enzyme:

For your TPH (both TPH1 and TPH2) enzyme to function properly, it requires another molecule called BH4 (tetrahydrobiopterin). BH4 is an example of what we call a “cofactor” – a substance that is needed by certain enzymes to carry out chemical reactions. You can learn more about BH4 in your BH4 Synthesis and Recycling traits.

In the second stage of serotonin synthesis, 5-HTP (5-hydroxytryptophan) is converted into serotonin. This reaction is catalysed by the enzyme AADC (aromatic L-amino acid decarboxylase).

AADC requires the active form of Vitamin B6, known as pyridoxal phosphate, as cofactor to function efficiently and produce serotonin.

Supplementing your diet with 5-HTP has been shown to increase serotonin levels in the body.

Why does TPH activity matter?

As explained above, TPH is responsible for the first stage of serotonin production (tryptophan --> 5-HTP).

When a substance is produced over multiple stages / chemical reactions, it is the slowest stage / reaction that determines how quickly that substance is produced overall. We call this slowest stage the “rate-limiting step.” It’s analogous to a running relay, in which the person running the slowest leg has the biggest impact on the overall finish time.

The reaction carried out by TPH is the rate-limiting step in the production of serotonin.

The activity of TPH therefore essentially determines how effectively you make serotonin.

On that note, assuming other factors (e.g. the breakdown of serotonin) are unchanged, high activity of TPH enzymes leads to greater production of serotonin.

Why is serotonin synthesis important?

As serotonin is a key neurotransmitter in the brain, our levels of serotonin affect nerve activity within circuits that regulate mood, sleep, appetite and cognition.

Changes in serotonin production therefore influence the way we feel, think and behave.

For example, excessively high serotonin production is associated with anxiety, sleep disturbances, and changes in appetite.

Changes in the production of serotonin hormone by the gut lining also has a significant impact on our digestive health.

Your latest trait examines variants of your TPH1 and TPH2 genes, which encode the TPH enzymes in your gut (TPH1) and neurons (TPH2) respectively.

Variants of these genes can affect the activity and quantity of the TPH enzymes, which, in turn, influence how well you produce serotonin in the brain, enteric nervous system and gut.