It is a key molecule that regulates the growth of cells in response to various stimuli, including: the availability of nutrients, changes in energy balance, hormones, changes in blood flow and oxygen delivery, and mechanical load on muscles (e.g. as part of resistance training).

mTOR controls the growth and production (or ‘synthesis’) of protein in various types of cells, including muscle cells (muscle fibers). Enlargement of muscle fibers (hypertophy) relies upon mTOR signalling. It therefore plays an important role in muscle gains following exercise.

mTOR also regulates a process called autophagy - the breakdown and recycling of old, faulty and damaged cell components. This process helps to rejuvenate cells and influences how quickly our cells age. mTOR is therefore crucially involved in the ageing process.

If you’ve ever worked out consistently over a period of time, you may have noticed that your muscles gradually became bigger. This is due to a process called hypertrophy.

Hypertrophy generally describes an increase in size of an organ due to enlargement of its constituent cells. * When applied to skeletal muscle, hypertrophy refers to an increase in muscle volume or mass resulting from a rise in the cross-sectional area of individual muscle fibers. Muscle hypertrophy is an adaptive response to what we term progressive overload – a gradual increase in the stress placed upon the musculoskeletal system. When it comes to strength training, progressive overload might, for example, involve gradually stepping up the maximum amount of weight you lift over consecutive training sessions.

*Note: this is in contrast to hyperplasia – which refers to an increase in the number of constituent cells.

How do muscles grow in size?

Before we describe hypertrophy in greater detail, it’s worth quickly going over the basic anatomy of our skeletal muscles. Our skeletal muscles (e.g. our biceps) are made up of lots of different types of tissue (collections of cells), including: blood vessels, nerves, connective tissue, and muscle fibers. It is our muscle fibers that are ultimately responsible for muscle contraction. 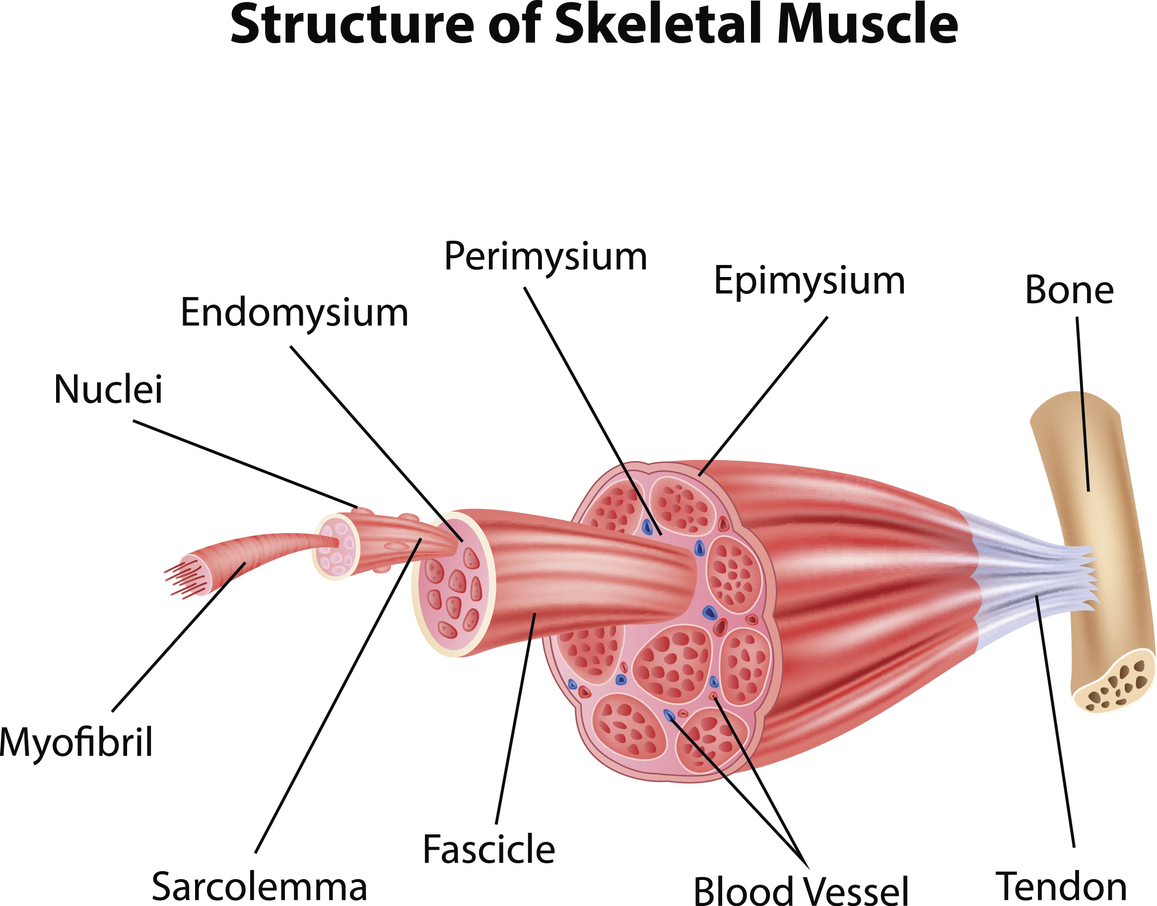 Muscle fibers themselves are made up of bundles of smaller thread-like structures called myofibrils. Myofibrils are the parts of muscle fibers that contract. They’re composed of thick and thin filaments, which are made, respectively, out of the contractile proteins myosin and actin. When our muscles contract, the thin actin filaments slide over the thick myosin filaments, generating a force.

Myofibrils are surrounded by a matrix similar to cell cytoplasm, called sarcoplasm. The sarcoplasm contains various fluids, stores of glycogen, non-contractile proteins and organelles (e.g. the mitochondria we encountered in your Mitochondrial Biogenesis trait).

Finally, each individual muscle fiber, containing both myofibrils and sarcoplasm, is enclosed by a membrane called the sarcolemma.

As explained earlier, hypertrophy of an entire muscle (e.g. the biceps) results from an increase in cross-sectional area of its individual muscle fibers.

1) Myofibrillar hypertrophy - an increase in the number and size of myofibrils.

As myofibrils become larger and more numerous, they are capable of generating greater force while contracting. As such, myofibrillar hypertrophy contributes to the strength gains following resistance training.

2) Sarcoplasmic hypertrophy - an increase in the volume of fluid, non-contractile proteins and other molecules in the sarcoplasm.

Increased production of non-contractile proteins causes sarcoplasm to expand and muscle fibers to grow in diameter.As the sarcoplasm is not actively involved in muscle contraction, sarcoplasmic hypertrophy itself is not thought to contribute to strength gains. If you’ve regularly hit the gym at some stage in life, chances are that you gained muscle mass and increased your strength. But, have you ever gone for a period of time without exercising a set of muscles? Perhaps you’ve been ill or injured or forced to rest in bed? In this scenario, you would have most likely lost muscle mass and dropped strength. So, why does this happen? Being in this state means your muscle fibers will, on balance, produce more proteins and subsequently increase in size. This leads to hypertrophy of your muscles.

If this enhanced protein production includes contractile proteins in myofibrils (a process known as myofibrillar protein synthesis), then you will also gain strength.

If your muscle cells break down proteins at a greater rate than they synthesize new proteins, you will have negative net total protein balance. This corresponds to the "fasted losses" areas of the graph above. This state can also be described as being catabolic.

In this scenario, you will lose muscle mass, with individual muscle fibers becoming smaller in size. This is known as muscle atrophy.

If there is net breakdown of contractile proteins within myofibrils, then you will also lose strength.

Why is muscle protein synthesis important?

We can see this pattern in the previous graph.

mTOR is a key molecule that regulates protein synthesis in muscle fibers and other cells.

It acts as a sensor of both the internal and external environments of a cell and “decides” whether conditions are right to switch on production of proteins. mTOR doesn’t work in isolation. Rather, it joins up with other molecules to form “multi-protein complexes.” The other molecules in these complexes help to regulate the activity of mTOR and also respond to various cell signals.

There are two distinct complexes of which mTOR is a key component:

Of both of these, mTORC1 is the most widely studied and understood. When mTOR is activated, the larger mTORC1 complex acts on various signalling pathways to boost protein production. mTORC1 also stimulates the production of fats and cholesterol, as well as new mitochondrial components (see the Mitochondrial Biogenesis blog for more detail).

As explained earlier, mTOR (or the mTORC1 complex) acts as a sensor of the internal and external environments of a cell. It can switch on production of proteins and cell growth in response to various stimuli.

Exposing your muscles to a mechanical load (e.g. lifting weights) triggers several different biochemical signalling cascades in your muscle cells that lead to muscle protein synthesis. In one of these pathways, studies show that mechanical stretch of skeletal muscle leads to the generation of a molecule called phosphatidic acid (PA). PA then activates the mTORC1 complex, leading to increased protein synthesis.

Amino acids are the building blocks of proteins. When a cell has a good supply of amino acids, it can increase its production of proteins.

The mTORC1 complex is sensitive to levels of amino acids inside cells, particularly the essential amino acid leucine. When levels rise, mTORC1 switches on protein production.

If you’re looking to build muscle, it is therefore important to consume enough protein, particularly post-exercise. This will provide your muscle cells with a good supply of amino acids for muscle protein synthesis.

Growth factors are special signalling proteins that stimulate the growth of cells. Some growth factors, such as insulin, can also be classified as hormones – chemical messages transported in the bloodstream.

When insulin and IGF-1 bind to their respective receptors, they trigger a signalling cascade known as the PI3K/AKT/mTOR pathway. This pathway ultimately activates mTORC1 and switches on protein production. Autophagy is a beneficial process for two main reasons.

Firstly, during times when there is limited availability of nutrients (for instance, during fasting), the breakdown of old cell components provides a fresh supply of nutrients (e.g. amino acids). These can then be used to produce new cell materials and fuel processes key to survival.

How does mTOR affect ageing?

Autophagy helps to rejuvenate cells by getting rid of old and damaged cell components and proteins. Disruption to the autophagy process, however, allows damaged proteins to accumulate. The accumulation of these damaged molecules gradually impairs cell function, shortening their lifespan, and leads to ageing.

By inhibiting autophagy, mTOR may allow damaged cell components to accumulate and contribute to the ageing process. High activity of mTOR may therefore be linked to increased ageing.

On this note, laboratory experiments show that artificially inhibiting mTOR activity can increase the lifespan of various non-human animals, including fruitflies, nematode worms and mice.

In this respect, one main gene we consider is your MTOR gene, which encodes the mTOR protein.

Variants of this gene can influence the amount and activity of mTOR protein you produce, and therefore affect how well your cells synthesize new proteins. This, in turn, can affect how effectively you gain muscle.

As mTOR also stimulates fat deposition and ageing, these processes will also be influenced by your MTOR gene variants.

As we explored earlier, several environmental or lifestyle factors (e.g. consuming protein, lifting weights) can alter the activity of mTOR.

While increasing mTOR activity may be beneficial for muscle gains, these benefits must be weighed up against the increased risk of fat accumulation and ageing.

Be sure to check out the Actions in your Protein synthesis and hypertrophy trait for diet, exercise and supplement recommendations personalized to you.