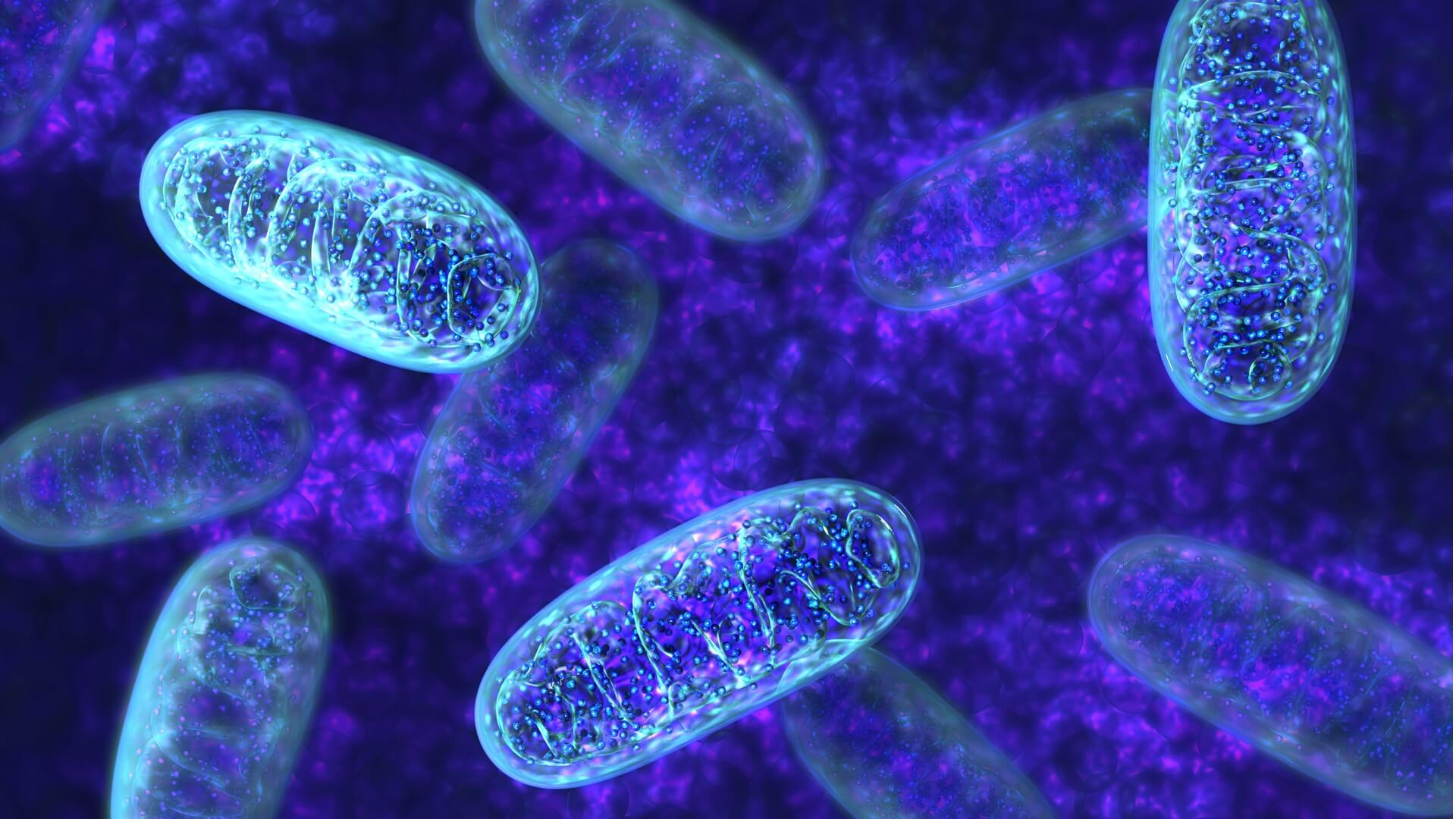 “Mitochondria are the powerhouses of the cell”

You may remember that neat phrase from high school biology class. Our mitochondria (single = mitochondrion) are specialized structures or “organelles” within our cells that are responsible for producing energy.

More specifically, mitochondria carry out cell respiration - the process by which we convert chemical energy from food into a common energy currency that can be used to power all sorts of cellular functions. Such cellular functions include the transport of molecules, growth of new cells and the contraction of muscle fibers, all of which require an energy currency molecule called adenosine tri-phosphate or ATP.

Inside our mitochondria are several enzymes that can generate ATP from a variety of fuel sources, including glucose (which we get from breaking down carbohydrates), fatty acids (from the breakdown of fats), and/or amino acids (from the breakdown of protein). This process of generating energy requires oxygen – we therefore call it aerobic respiration. 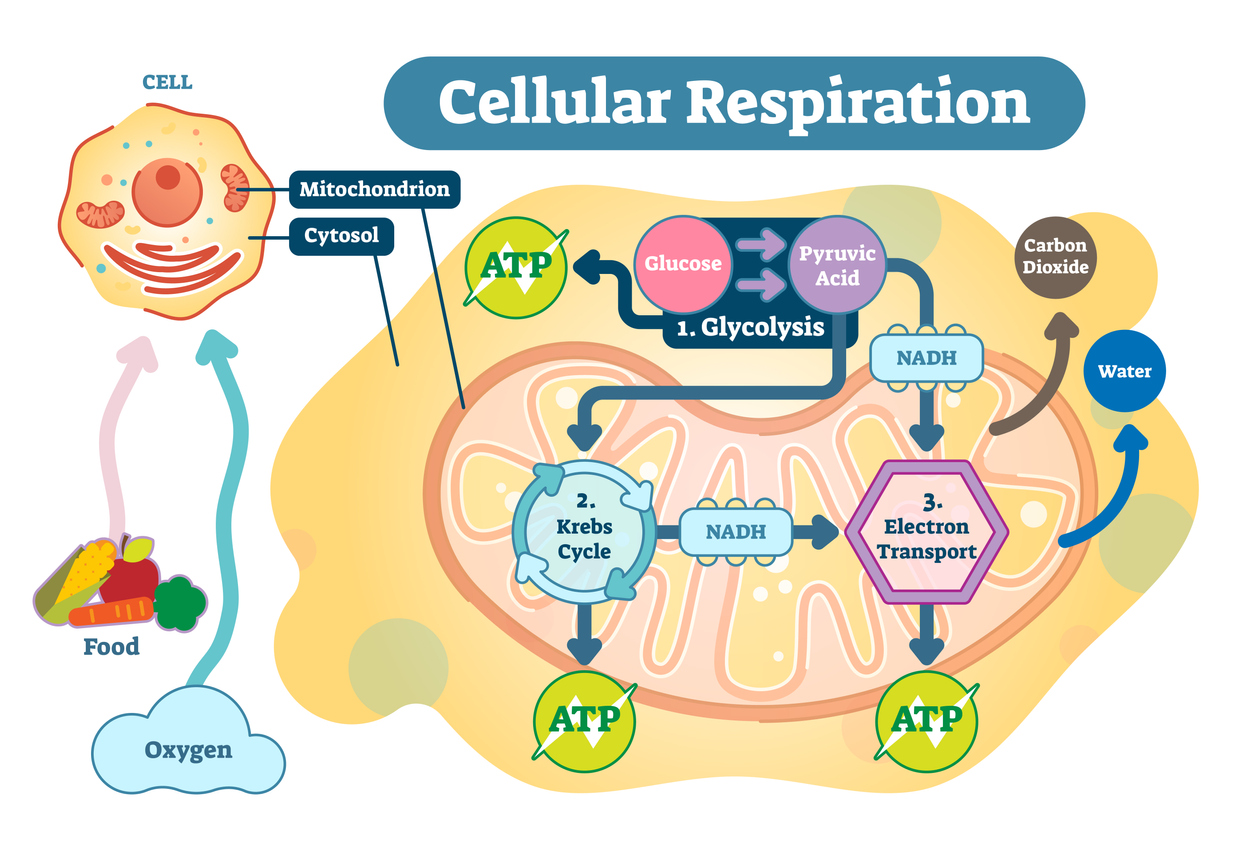 Mitochondria are responsible for two key stages of aerobic respiration: the Kreb’s Cycle (or citric acid cycle) and electron transport (or oxidative phosphorylation). Both of these stages produce ATP, which we can then use to power cell functions.

In skeletal muscle cells, aerobic respiration is our main means of providing energy for repeated muscle contraction that is sustained over time. Mitochondria are therefore particularly important for fuelling longer bouts of exercise, such as that involved in endurance activities such as long-distance running, cycling and swimming.

What is mitochondrial biogenesis?

Put simply, this may involve both:

As mitochondria generate ATP (our cells’ energy currency), one key effect of mitochondrial biogenesis is to provide our cells with a greater energy supply.

When mitochondrial biogenesis occurs in skeletal muscle, for instance, the increase in size and/or number of mitochondria allows us to sustain repeated muscle contraction over a longer period of time. Clearly this is very useful for endurance exercise, which is characterized by prolonged efforts (e.g. long distance running, cycling). In studies of humans (which is of more interest to us!), samples (biopsies) of muscle taken from previously untrained individuals show that they develop 40% more mitochondria in response to just 6 weeks of endurance training.

Why is mitochondrial biogenesis important?

Ever wonder why endurance athletes seem to be able to go on and on and on?

The answer is that, over months of training, their muscles have developed a better ability to extract oxygen from the bloodstream. One reason for this rise in oxygen extraction is due to the growth of capillaries and therefore improved blood supply to muscle fibers. Another reason is that, as a result of mitochondrial biogenesis in response to training, endurance athletes’ muscle fibers have higher mitochondrial content.

Higher mitochondrial content allows muscle cells to use more oxygen for the process of aerobic respiration. This gives muscles a better ability to produce ATP, which can be used to sustain exercise for long periods.

Mitochondrial biogenesis is therefore a prime example of what we term a ‘training adaptation’ – a beneficial response of our body to the repeated stress of exercise.

Mitochondrial biogenesis may play a role in a cell’s sensitivity to insulin and therefore our control of blood glucose levels.

Interestingly, studies suggest that the muscle cells of people with Type II diabetes (which is characterised by high blood glucose levels and poor insulin sensitivity) have fewer and smaller mitochondria.

As part of the process of aerobic respiration, mitochondria produce substances called Reactive Oxygen Species (ROS), which are a type of free radical.

Free radicals are atoms or molecules with unpaired electrons, which makes them highly reactive and capable of causing damage to cells and DNA. This type of damage is known as oxidative damage, and it is linked to inflammation, damage to blood vessels, aging, and poorer insulin sensitivity.

As mentioned earlier, mitochondrial biogenesis is a training adaptation that occurs in response to frequent exercise. Although studies show that resistance training can also stimulate mitochondrial biogenesis, the effect is weaker than that observed with endurance training.

In line with this, mitochondrial biogenesis is more pronounced in our slow-twitch (Type I) and fast-twitch oxidative (Type IIa) muscle fibers compared to our (very) fast-twitch glycolytic (Type IIb) fibers.

Our Type I and Type IIa fibers rely on aerobic respiration for energy and are recruited more during endurance exercise.

It’s still a subject of debate as to how best structure a training programme to stimulate mitochondrial biogenesis. Should you train a lot, or train hard?

Some studies suggest that training volume (i.e. the total amount of work) is much more important than training intensity (i.e. how hard you exercise) in terms of increasing mitochondrial size and number. In the scientific literature, high volume training is said to be linked to an increase in mitochondrial content.

By contrast, more intense workouts, such as HIIT (high-intensity interval training), are thought to make our mitochondria more effective at producing energy, without necessarily increasing the size or number of mitochondria. This is referred to in the scientific literature as an increase in mitochondrial function.

Without getting too bogged down in this scientific debate, it is likely that both HIIT and continuous (steady state) exercise can stimulate mitochondrial biogenesis and improve your endurance ability.

Our muscles are very “plastic.” This doesn’t mean they’re made from PVC, but, rather, that our muscle cells adapt and change structure quickly in response to changing environmental demands.

Caloric restriction simply refers to limiting the amount of calories we eat, while ensuring we still get all our essential nutrients and do not become malnourished.

There is ample evidence that caloric restriction can stimulate mitochondrial biogenesis.

In one study, subjects were fed a diet with 25% fewer calories over a period of 6 months. Compared to control subjects (who were fed a normal diet), those undergoing caloric restriction produced more mitochondria in their skeletal muscles and expressed more PGC-1α protein (see “What is PGC-1α?” below).

Furthermore, the caloric restriction subjects had markedly reduced markers of DNA damage. This is likely to have resulted from the role of mitochondrial biogenesis in limiting the production of damaging Reactive Oxygen Species (ROS) molecules.

Exposure to both hot and cold temperatures has been shown to trigger mitochondrial biogenesis.

The mechanisms behind this are not completely clear. During endurance exercise, the temperature within muscles builds up due to the conversion of chemical energy into heat energy as part of respiration. This “mild heat stress” may act as a trigger for mitochondrial biogenesis.

It is a key protein that regulates mitochondrial biogenesis.

As part of our response to exercise training, we produce more PGC-1α, which stimulates the growth, enlargement and division of mitochondria in skeletal muscle cells (i.e. mitochondrial biogenesis).

How does PGC-1α work?

Some of these kinase enzymes (e.g. AMPK) activate and increase the production of PGC-1α. In turn, PGC-1α binds to and activates other proteins called transcription factors.

Transcription factors are important molecules that bind directly to DNA and switch genes ‘on’ or ‘off.’

When a gene (which is a unit of DNA that codes for a protein) is switched on by a transcription factor, that stretch of DNA is eventually made into a protein product. This whole process is called gene expression (the first part of which is called transcription). These proteins are then imported into the mitochondria, stimulating their growth and division.

Interestingly, mitochondria also have their own DNA. Most of our DNA is found in the nucleus of a cell (which we term ‘nuclear DNA’), where it is packaged into chromosomes and contains approximately 21,000 genes. Our mitochondria, however, have a much smaller section of their own DNA (called mitochondrial DNA or mtDNA), containing 37 genes that code for proteins involved in respiration.

Your PGC-1α protein is encoded by your PPARGC1A (or PGC1A) gene.

Variants of this gene affect how well you produce the PGC-1α protein, which, in turn, influences how effectively you regulate mitochondrial biogenesis. As mitochondria are important for aerobic respiration during endurance exercise, your PGC1A gene can influence your baseline endurance / aerobic exercise performance.

At FitnessGenes, we analyze single-letter changes in your DNA code. These are called Single Nucleotide Polymorphisms or SNPs (pronounced “snips”).

When a SNP occurs in a gene (which is a stretch of DNA that codes for a particular protein), it gives rises to different variants of that gene. This, in turn, cause changes to the structure, function and quantity of protein produced by that gene.

This is exactly what happens with variants (called ‘alleles’) of your PPARGC1A / PGC1A gene.

A SNP (rs8192678) in the PGC1A gene gives rise to two variants (alleles) – the “A” allele and the “G” allele. Depending on which variants you inherit, you will ordinarily produce different quantities of PGC-1α protein.

The ‘A’ allele of the PGC1A gene is linked to lower levels of PGC-1α protein and slightly lower baseline endurance ability.  Some studies suggest the ‘A’ allele is also linked to a higher risk of Type II diabetes and poor insulin sensitivity.

(Note: the ‘A’ allele is sometimes called the ‘S’ allele, as the single letter change in DNA code gives rise to the Serine amino acid within the PGC-1α protein).

The ‘G’ allele of the PGC1A gene is linked to higher levels of PGC-1α protein and higher baseline endurance ability.

(Note: As opposed to the A (S) allele which codes for Serine, the ‘G’ allele gives rise to the Glycine amino acid within the PGC-1α protein).

We inherit two copies of each gene – one from our mother and one from our father. Depending on which PGC1A gene variant / allele we inherit from each parent, we can have one of three possible gene combinations (called genotypes).

If we inherit an ‘A’ allele from both our parents, we will have the AA genotype. This is associated with low PGC-1α protein levels.

If we inherit a G allele from both our parents, will have the GG genotype. This is associated with high PGC-1α protein levels.

If we inherit an ‘A’ allele from one parent, and a ‘G’ allele from another parent, we will have the AG (or GA) genotype. This is associated with medium PGC-1α protein levels.

Of course, genes are only one part of the picture. Your lifestyle, including how you exercise, eat and recover, can all significantly affect your PGC-1α protein levels. To find out more, be sure to check out your actions.