TCF7L2 is a gene that codes for a protein called transcription factor 7 like 2.

In particular, the TCF7L2 gene regulates the expression of other genes related to the secretion and activity of insulin. As you may recall from the Insulin and your blood glucose levels trait, insulin is an important hormone that controls our blood sugar levels. One of insulin’s main functions is to facilitate the movement of sugar (in the form of glucose) from the bloodstream and into tissues, such as skeletal muscle.

By altering our body’s secretion of and response to insulin, it’s thought that variants of the TCF7L2 can affect our risk of high blood sugar levels and related conditions (namely, Type II diabetes).

What is the role of TCF7L2 in the body?

TCF7L2 acts to switch on and control the activity of other genes related to the secretion and function of insulin.

More specifically, TCF7L2 is a key player in a cell signalling pathway called the “Wnt signalling pathway”. This pathway regulates many processes, including the growth and development of cells, the secretion of insulin by our pancreas, and the response of tissues to insulin.

TCF7L2 plays two major roles that affect the release of insulin and control of our blood sugar levels:

In addition to directly enhancing insulin production and secretion, GLP-1 also stimulates the growth in number (or "proliferation") of β cells in our pancreas. Complementing this, GLP-1 inhibits the programmed death or "apoptosis" of β cells. Both of these actions contribute to greater numbers of β cells and therefore improved insulin secretion by the pancreas. As well as stimulating insulin secretion, GLP-1 inhibits the secretion of another hormone - glucagon. Glucagon has the opposite effects in the body to insulin - i.e. it acts to increase levels of glucose in the bloodstream. By inhibiting glucagon release, GLP-1 helps insulin to regulate our blood glucose levels.

As mentioned previously, insulin facilitates the entry of glucose from the bloodstream into tissues (e.g. skeletal muscle). 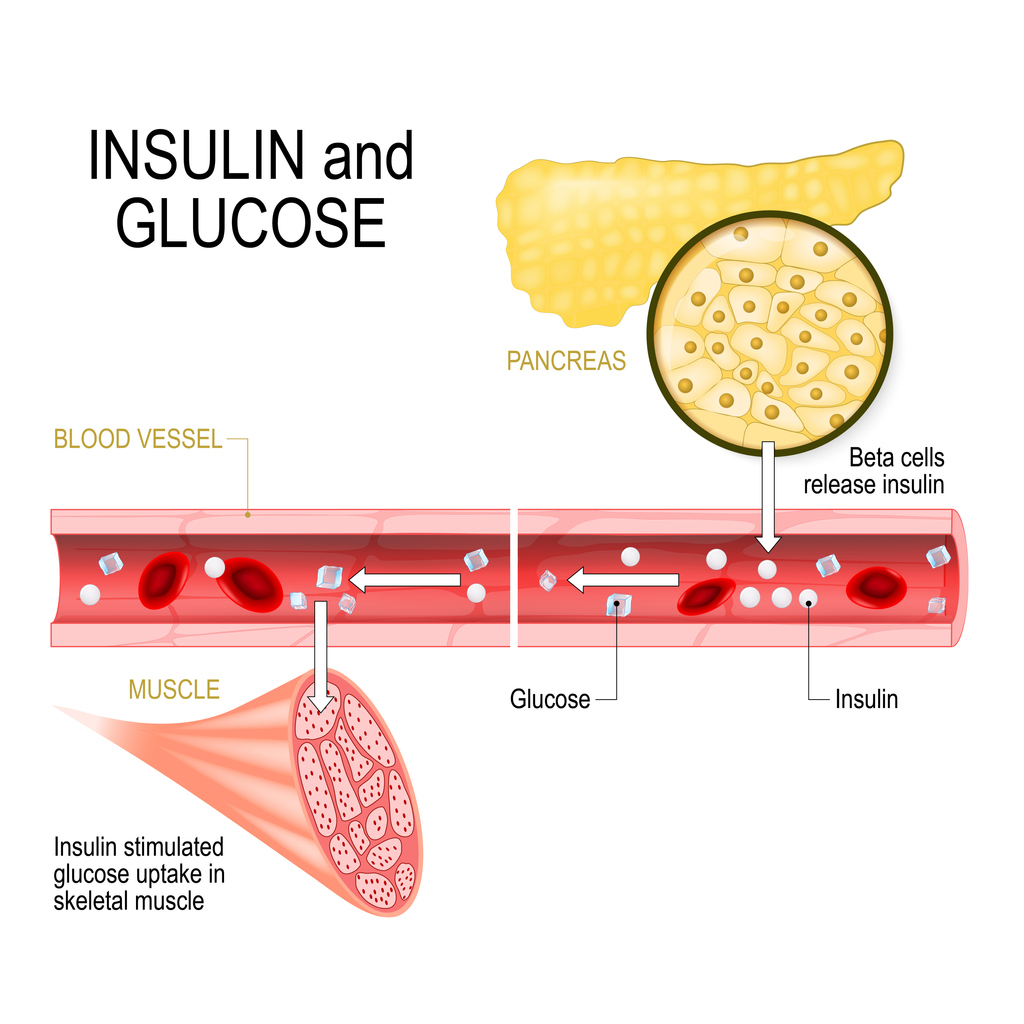 If β cells in your pancreas cannot secrete enough insulin in response to food intake, then it becomes increasingly difficult for glucose to be taken up by tissues from the bloodstream.

Similarly, if tissues in your body are insensitive to the effects of insulin (a phenomenon known as insulin resistance), then glucose tends to linger in the bloodstream.

Furthermore, if tissues are insensitive or resistant to insulin, β cells in your pancreas may try to compensate by producing high amounts of insulin. If insulin secretion is impaired, this compensatory process cannot occur, so blood glucose levels remain elevated.

On a similar note, if your pancreas has to work extra hard to produce high amounts of insulin, it may eventually become unable to keep up with the body's demands for insulin. Again, this leads to rises in blood glucose levels.

A combination of high blood glucose levels, poor insulin secretion and resistance to insulin can lead to Type II diabetes.

What are the different TCF7L2 gene variants?

There are several different variants of the TCF7L2 gene caused by single-letter changes (called Single Nucleotide Polymorphisms or SNPs) in the DNA sequence.

Your TCF7L2 and insulin secretion trait analyzes several different SNPs of the TCF7L2 gene, including:

These SNPs are thought to affect the expression of the TCF7L2 gene, which influences the secretion and activity of insulin and GLP-1. This, in turn, affects our risk of developing high blood glucose levels and Type II diabetes.

Of the above SNPs, one of the most widely studied is rs7903146. This SNP causes a change in the DNA sequence from the letter ‘C’ to the letter ‘T’, creating two gene variants (or ‘alleles’) – the ‘C’ allele and the ‘T’ allele.

Several studies show that the ‘T’ allele is associated with a significantly increased risk of developing Type II diabetes in different population groups. For example, one study found that people carrying one or two copies of the ‘T’ allele (i.e. CT and TT genotypes) had a 1.45 and 2.41 times higher risk of Type II diabetes.

Consequently, the ‘T’ allele created by the rs7903146 is considered to be a significant risk allele for high blood glucose and Type II diabetes.

How do TCF7L2 variants affect insulin secretion and function?

For example, a study of 1,100 non-diabetic German subjects found that TCF7L2 SNPs were associated with higher blood glucose levels and poorer insulin secretion.

The rs7903146 SNP is also specifically shown to affect insulin secretion in response to food intake. Ordinarily, when we eat and digest food, we experience a subsequent rise in blood glucose that triggers the release of insulin. People with the TT genotype, however, have been shown to have a blunted insulin response.

Other studies show that TCF7L2 SNPs hamper the ability of GLP-1 to stimulate insulin release.

You will be classified into one of three groups: