What is the gastrointestinal (GI) tract?

Your gastrointestinal (GI) tract, which is also known as your digestive tract, consists of those organs through which food passes between the mouth and anus. It therefore includes the mouth, esophagus, stomach, small intestine and large intestine (colon).

The purpose of the gastrointestinal tract is to digest and break down food, absorb nutrients and expel waste products. 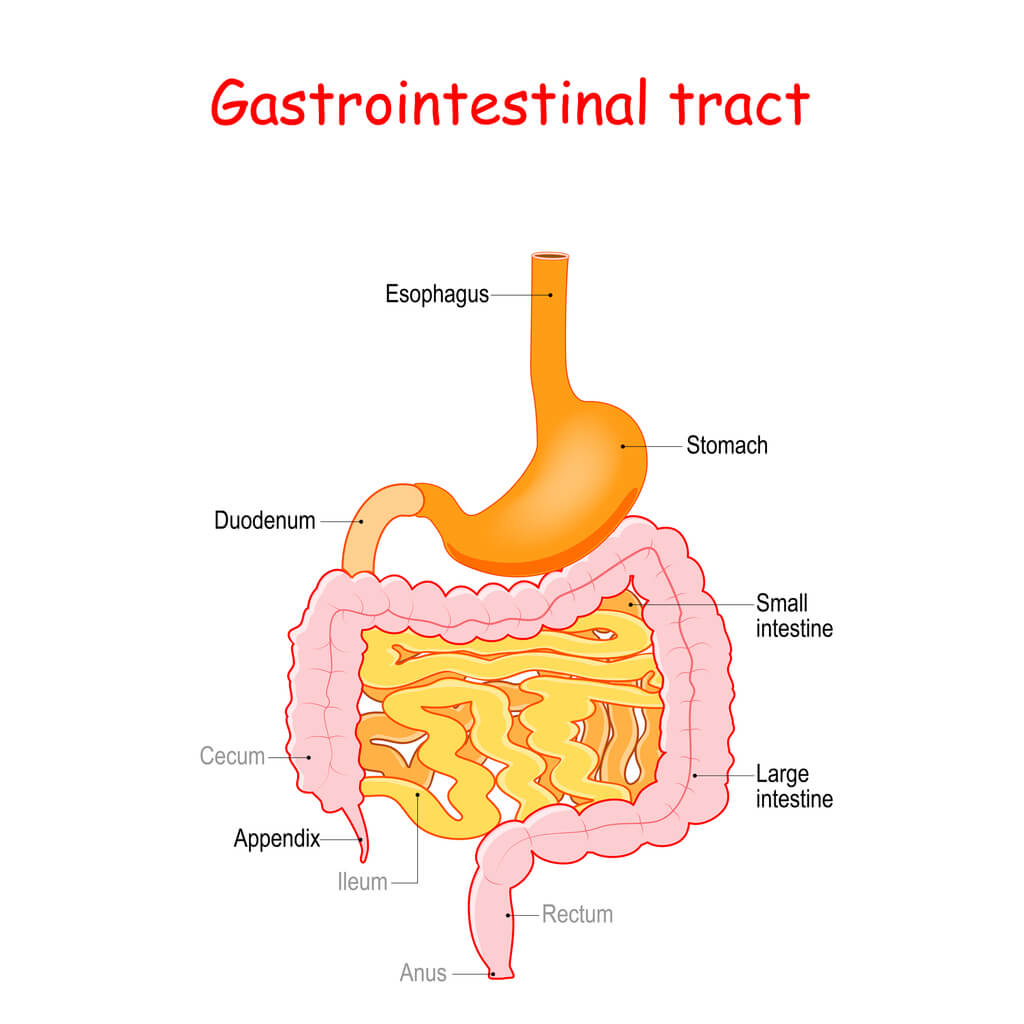 What is the gut microbiota?

It’s tempting to think that the human body solely contains human cells. Within our gastrointestinal tract, however, live around 100 trillion microorganisms, which predominantly include bacteria, but also various fungi, viruses and protozoa.

This collection of microorganisms is known as our gut microbiota.

There are several different types of bacteria and microorganisms that colonize our gastrointestinal tract. Many of these types have co-evolved with humans and are harmless or even beneficial to our health. These are known as commensals. Other types of microorganisms have the potential to damage cells and cause disease. These are known as pathogens.

The composition of our gut microbiota – i.e. the variety of different types of bacteria and other microorganisms colonizing our gut – influences our immune function, digestive health, levels of inflammation, metabolism and even our cognition and behaviour.

What is the role of gut microbiota?

Several types of bacteria and other microorganisms within the GI tract have a mutually beneficial relationship with the human host. For example, humans provide bacteria with nutrients from their (human) diet. In return, bacteria can help with functions such as the production of key vitamins or support of human immune responses.

Some of the beneficial roles carried out by the gut microbiota are discussed below.

Changes in the composition of gut microbiota can influence the activity of these beneficial functions.

Breakdown of nutrients in our diet

SCFAs, which include molecules such as butyrate, acetate and proprionate, provide an important energy source for (human) cells within the colon.

In addition to serving as an energy source, SCFAs also influence the body’s metabolism of fats and sugars, regulate immune function and alter patterns of inflammation.

Gut bacteria are capable of making various essential vitamins, including:

Maintenance of the intestinal lining

The inside walls of our intestines are lined with a layer of cells known as the intestinal epithelium. This layer supports the absorption of water and nutrients and also serves as a protective physical barrier against pathogens (disease-causing bacteria, viruses, fungi etc.) inside the intestinal lumen. Mucus is an extremely important substance, which not only lubricates digested food, but also acts as physical barrier, protecting the intestine from pathogens (disease-causing microorganisms). Mucus therefore plays an important role in defence against disease.

The large intestine produces a two-tier layer of mucus. The inner tier is firmly anchored to the intestinal lining and prevents bacteria (both harmful and beneficial) from penetrating into intestinal cells. The outer tier of mucus is much more loosely attached and allows certain types of gut bacteria to penetrate.

Some types of gut bacteria help to co-ordinate mucus production and can alter the chemical consistency of the mucus being produced.

One of the most important roles of the gut microbiota is to support and stimulate the immune system, which can help protect against infection. In particular, our intestines have a specialized system of tissues known as GALT (gut-associated lymphoid tissue) that is designed to mount an immune response and fight off pathogens (disease-causing bacteria and other microorganisms).

Both beneficial and pathogenic gut bacteria produce unique patterns of molecules that are different from human cells. In other words, they have individual molecular signatures, called Microbe-associated Molecular Patterns (MAMPs), that distinguish them from human cells.

These MAMPs on gut bacteria are recognised by cells in our intestinal lining (intestinal epithelial cells), which have specialized receptors called pattern recognition receptors (PRPs). When PRPs are activated, they stimulate various immune responses, such as the recruitment of white blood cells and the release of antibodies (also known as immunoglobulins).

By stimulating these immune responses, gut microbiota help the gastrointestinal tract (and wider human body) defend against pathogens (disease-causing microorganisms). Such immune responses also prevent the gut from being over-colonised by other less harmful bacteria.

A specific example of the above-described (MAMP-PRP) mechanism is seen with specialized cells in the intestinal lining called Paneth cells. When Paneth cells are activated, they produce different substances that act to neutralise and destroy pathogens (disease-causing microorganisms). These substances are known as anti-microbial peptides (AMPs) and include enzymes and other proteins (e.g. defensins).

By producing antimicrobial peptides (AMPs), Paneth cells help to prevent pathogens from penetrating into the inner tier of mucus and causing infection and inflammation of the intestinal lining.

We’ve previously encountered inflammation in your Inflammation and IL-6 trait. Readers are encouraged to revisit this article to get a more in-depth overview.

On this note, excessive inflammation can lead to damage to cells lining the stomach, intestines and other structures of the gastrointestinal tract. In turn, this damage may cause digestive discomfort, issues with the absorption of nutrients, and altered bowel movements.

Chronic inflammation of the gastrointestinal tract (particularly the colon and latter section of the small intestine) is also a major component of Inflammatory Bowel Diseases such as Crohn’s Disease and Ulcerative Colitis.*

How do changes in the composition of gut microbiota affect inflammation of the digestive tract?

Gut bacteria, however, are also capable of excessively stimulating the immune system, giving rise to inflammation and damage to cells of the digestive tract. Furthermore, pathogenic gut bacteria can cause infection of the GI tract, which triggers an inflammatory response.

This fine balance between fighting infection and excessive inflammation is influenced by the composition of our gut microbiota i.e. the different types of bacteria (and other microorganisms) that colonize our GI tract.

Too much or too little of certain types of bacteria, or a reduced a diversity of gut bacteria, can lead to excessive inflammation of the digestive tract. For example, studies show that an increased proportion of Escherichia and Bacteroides bacteria are associated with inflammatory bowel disorders. By contrast, higher proportions of some types of Clostridium bacteria are associated with lower levels of inflammation.

Damaging imbalances in the composition of our gut microbiota is known as dysbiosis. Studies suggest that dysbiosis within the gastrointestinal tract can lead to inflammation.

What is NOD2 and what does it do in the body?

It is a type of Pattern Recognition Receptor (PRR) which recognises the unique molecular signatures (MAMPs) produced by certain bacteria.

NOD2 proteins are produced by Paneth cells in the intestinal lining. When NOD2 recognises the molecular signatures of bacteria, it becomes activated and coordinates the production of various bactericidal substances that destroy and neutralise the bacteria. These bactericidal substances are called anti-microbial peptides (AMPs) and include enzymes (e.g. lysozyme) and other protective proteins (e.g. defensins).

By stimulating the production of AMPs, NOD2 helps to protect the intestinal lining and overlying mucus from being invaded and penetrated by harmful bacteria (pathogens). In this way, NOD2 acts to prevent bacterial infection and inflammation of the intestinal wall.

Furthermore, AMPs also help to prevent the gut microbiota from being over-colonised by certain types of bacteria. This ensures the composition gut microbiota is kept in balance, which reduces the risk of inflammation.

The NOD2 protein is encoded by the NOD2 gene.

Evidence suggests that many of these NOD2 gene variants can lead to reduced function of the NOD2 protein.

In turn, reduced NOD2 protein function leads to impaired production of AMPs (antimicrobial peptides) that destroy and neutralise bacteria. This allows pathogenic bacteria to penetrate into the inner mucus layer and intestinal lining, triggering inflammation. Furthermore, this disrupts the composition of gut microbiota, leading to imbalances of various types of bacteria. This process, known as dysbiosis causes inflammation of the gastrointestinal lining. Your GI Inflammation Risk (NOD2) trait will analyze and compile several NOD2 gene variants and classify your risk of gastrointestinal inflammation into one of three categories: