It is an enzyme, found in several tissues, that is responsible for a type of reaction called acetylation.

This reaction is important for several processes in the body, including the breakdown and removal of potentially harmful compounds by the liver and other tissues (sometimes known as detoxification).

Variants of the NAT1 gene can affect your rate of acetylation which, in turn, can influence your ability to detoxify various substances.

Acetylation refers to chemical reactions in the body that attach a molecule known as an acetyl group (CH3CHO) to other compounds.

For example, the NAT1 enzyme transfers an acetyl group from a molecule called acetyl CoA and attaches it to various proteins and compounds (including those found in certain drugs and toxic substances).

The attachment of an acetyl group to another molecule modifies the properties of that molecule, making it more or less stable, toxic, or biologically active.

For this reason, acetylation plays a key role in regulating proteins, detoxifying harmful compounds, breaking down drugs and activating other compounds. 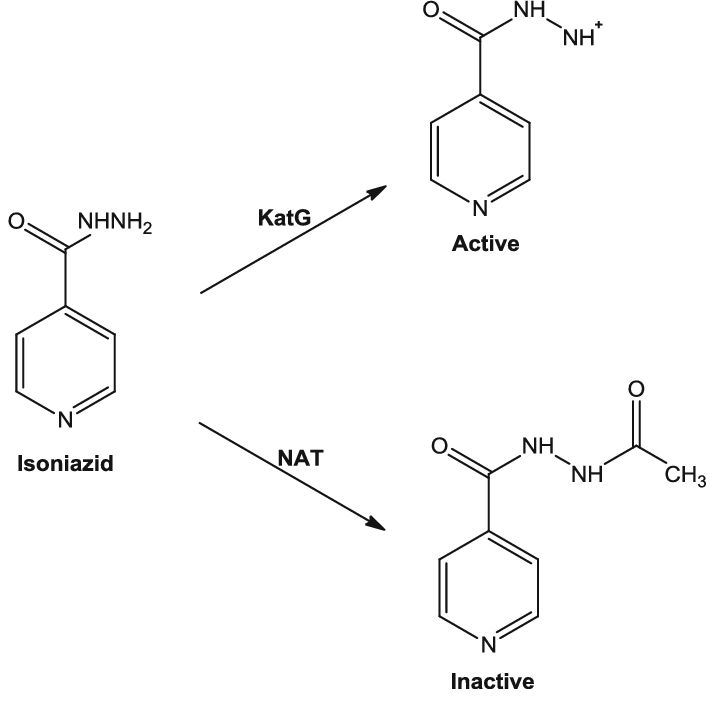 The bottom reaction in diagram above shows the acetylation of isoniazid: a drug used to treat TB (tuberculosis). Adding an acetyl group to isoniazid forms acetyl-isoniazid, which is inactive and be can be further metabolized and removed from the body.

Why is acetylation important?

As mentioned in the previous section, acetylation modifies the biochemical properties of various molecules. In this respect, acetylation plays a key role in regulating proteins, detoxification of drugs and environmental toxins, and the bioactivation of compounds.

Regulation and stabilization of proteins

NAT1 and other NAT enzymes play a key role in regulating and stabilizing proteins. By adding an acetyl group to amino acids in a protein chain, acetylation alters the structure and function of various proteins.

For example, acetylation can stabilize a protein, making it less likely to be degraded. Acetylation also regulates how proteins are transported within cells, and how they are further metabolised.

Metabolism and elimination (detoxification) of drugs

Our body has evolved to remove any substance which cannot be used to serve its needs. Drugs and medications often fall into this category, and we have a complex system of enzymes (particularly in the liver) that helps to remove these substances from our body. This process is sometimes referred to as detoxification.

In very basic terms, we get rid of drugs in two basic stages:

Acetylation plays a key role in this first stage. By adding an acetyl-group to various drugs, acetylation makes them less active and more readily excretable. The subsequent molecules can then be further metabolized and excreted from cells and the body (often in urine or in bile).

NAT enzymes are also involved in the acetylation of drugs that contain or are derived from a molecule called hydrazine. Examples of hydrazine drugs include:

Acetylation by NAT enzymes (particularly NAT1 and NAT2) therefore plays a key role in the deactivation, clearance and protection against the adverse effects of arylamine and hydrazine drugs.

Metabolism and elimination (detoxification) of other environmental toxins

The same complex system of enzymes that helps us to chemically modify and remove drugs also works on other toxins found in the environment e.g. industrial chemicals, pollutants in the air, toxins found in cigarette smoke.

In particular, acetylation by NAT enzymes helps us to inactivate and clear one specific type of toxin – heterocyclic amines (HCAs).

HCAs (or HAAs – Heterocyclic aromatic amines) are also chemically classified as arylamines and are potentially harmful substances produced from the heating of nitrogenous compounds. Sources of HCAs include:

Meat (including fish) contain creatine, creatinine and amino acids which, when heated, go on to form HCAs. High temperature methods of cooking meat, such as pan frying and grilling over an open flame, are thought to be especially linked to the production of HCAs. Furthermore, cooking meat at higher temperatures and for a longer time period increases the content of HCAs.

HCAs have the potential to damage molecules within cells, including DNA. Damage to DNA can enhance ageing, alter cell development and lead to uncontrolled cell growth. On this note, animal studies have shown that exposure to HCAs can cause cancer. For example, feeding rats high doses of HCAs leads to the development of tumours in the liver, lungs and lymph nodes.

The link between HCAs in cooked meat and cancer in humans is less clear cut. Some studies have found an increased risk of colorectal, prostate and pancreatic cancer in people who consume higher amounts of well-done, fried and barbecued meats, but more conclusive research is required.

Acetylation of some HCAs by NAT may help to make them less active and aid their clearance from the body. In this respect, acetylation may offer some protection from cell damage caused by HCAs.

For example, some types of heterocyclic amines (HCAs) are activated and made more potentially damaging by acetylation.

The NAT1 enzyme is coded for the NAT1 gene.

Several different SNPs (Single Nucleotide Polymorphisms) within this gene can affect the levels and activity of the NAT1 enzyme. This, in turn, affects the speed of acetylation and therefore the rate at which you can detoxify and clear various compounds (e.g. arylamines) from the body.

One key SNP within the NAT1 gene is given the code: rs4986782. This SNP causes a G to A change in the DNA sequence, creating two different gene variants or alleles – the ‘G’ allele and the ‘A’ allele.

The normal (or wildtype) ‘G’ allele is linked to normal activity of the NAT1 enzyme.

People inheriting two copies of the ‘G’ allele (i.e. those with the GG genotype) therefore have a good rate of acetylation and are classified as “fast acetylators”.

By contrast, the ‘A’ allele causes a change in the amino acid sequence of the NAT1 enzyme, leading to reduced enzyme activity and slower rates of acetylation. Consequently, if you inherit one or two copies of the ‘A’ allele, you are considered a ‘medium’ (GA) or ‘slow acetylator’ (AA), respectively.

In addition to rs4986782, your NAT1 and detoxification trait also accounts for other SNPs within the NAT1 gene that affect NAT1 activity.

The speed of acetylation – i.e. whether you’re a fast, medium or slow acetylator – influences how well your body can deactivate and clear various compounds, including arylamine and hydrazine drugs and HCAs.

Your NAT1 and detoxification trait specifically focusses on the rate of acetylation carried out by the NAT1 enzyme. Bear in mind that other enzymes (e.g. NAT2) also affect the rate acetylation – these will analyzed in upcoming traits.

Detoxification of hydrazine and arylamine drugs

The speed of acetylation affects how effectively you can deactivate and clear hydrazine and arylamine drugs. Slow acetylators may be less effective at clearing these drugs and therefore more susceptible to toxic side effects caused by the build up of these drugs in the body.

For example, slow acetylators may be more susceptible to toxic side effects caused by the hydrazine drug isoniazid.

Your rate of acetylation influences how effectively you can clear toxic compounds, including the HCAs (heterocyclic amines) found in cigarette smoke, diesel exhaust and meat cooked at high temperatures.