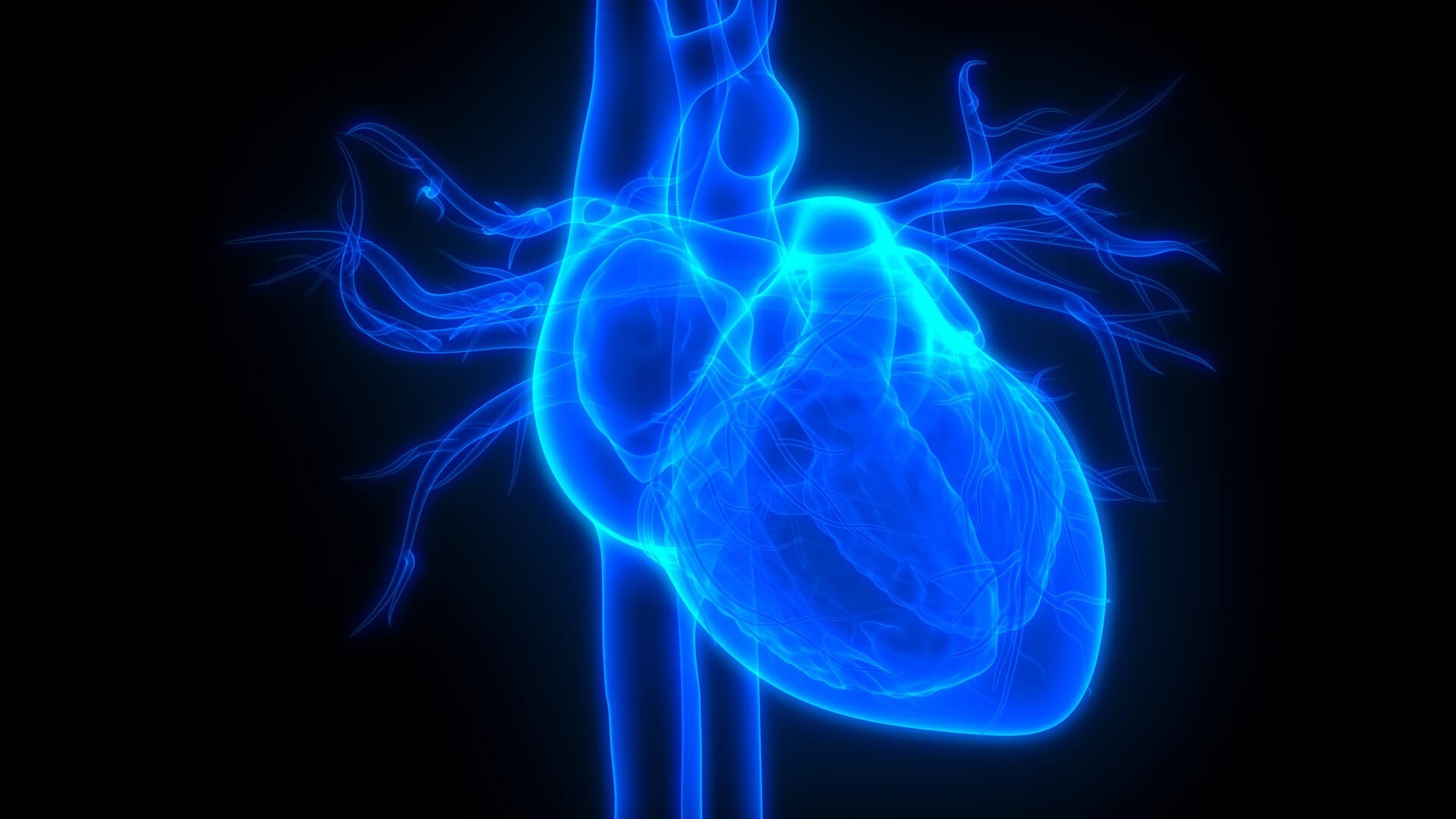 What is glutamic acid?

Glutamic acid is a non-essential amino acid that is important for making various proteins, regulating metabolic processes and sending nerve signals in the brain.

“Amino acids” are the building blocks of proteins. Glutamic acid, along with glutamine, proline, histidine, arginine and ornithine, belongs to a family of related amino acids known as the glutamate amino acids.

The term ‘non-essential’ means that our body can synthesize glutamic acid itself. Glutamic acid is also abundant in foodstuffs, either as a free amino acid, or as part of larger protein chains. Both plant and animal proteins are rich in glutamic acid, with meat, fish, eggs, dairy products, and protein-rich legumes (e.g. beans and lentils) being good sources.

While the body can make enough glutamic acid to meet our needs in most situations, major trauma, sepsis, chemotherapy and radiotherapy can all deplete glutamic acid, meaning that supplementation is required. In this respect, it may be more accurate to classify glutamic acid as a “conditionally essential” amino acid. 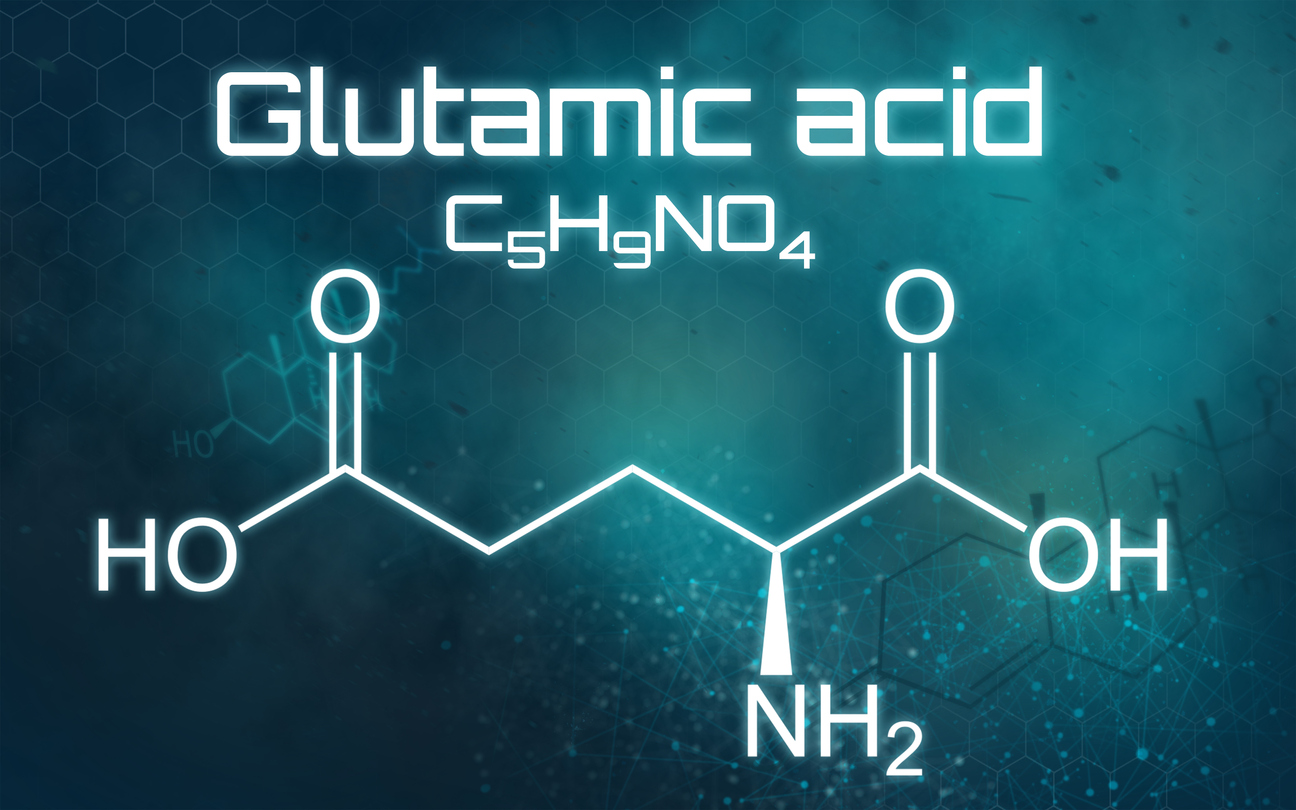 In the body, glutamic acid quickly donates a H+ ion to form glutamate. Consequently, we often use the terms glutamic acid and glutamate interchangeably.

Why is glutamic acid (glutamate) important?

Glutamic acid plays a number of roles in the body, including: the manufacture of proteins, the production of neurotransmitters, making the antioxidant glutathione, and being used as an energy source.

Neurotransmitters are chemical messengers used to convey a signal from one nerve (or ‘neuron’) to another. In the body, glutamic acid quickly becomes a closely related molecule called glutamate. (For this reason, the terms “glutamic acid” and “glutamate” are often used interchangeably.)

Glutamate is an important excitatory neurotransmitter in the brain. This means it stimulates neurons, making them more likely to fire nerve signals. It also plays a role in the growth and development of synapses – the connections between neurons. Accordingly, glutamate is very important for learning and memory.

Glutamic acid is also made into another neurotransmitter called GABA (gamma-aminobutyric acid). Unlike glutamate, GABA is an inhibitory neurotransmitter – it reduces the likelihood of a neuron firing a signal. GABA plays a role in the control of movement, sleep and mood.

Glutamic acid (or glutamate) is involved in several important metabolic reactions in the body. For example, glutamate plays a key role in a series of reactions called the γ-glutamyl cycle. This cycle is responsible for the production and recycling of glutathione. 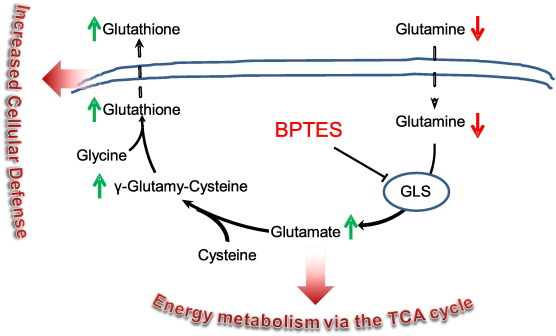 Glutamate can also be used as an energy source, particularly by skeletal muscles and the gut. It can be converted into a molecule called alpha-ketoglutarate, which can then enter a stage of aerobic respiration known as the citric acid (TCA or Kreb’s) cycle. This process leads to the generation of ATP – the chemical energy currency used by cells to power various functions.

Through a process known as gluconeogenesis, glutamate can also be converted into glucose, which is our cells’ main energy source.

Our body can make glutamine itself, by converting it from glutamic acid (or glutamate). This reaction is catalysed by an enzyme called glutamine synthetase (GS). Although our body can usually make enough glutamine to meet our needs, certain catabolic states (e.g. disease, sepsis, major trauma, chemotherapy) mean that glutamine supplementation is required. In this respect, glutamine, like glutamic acid, is considered to be a conditionally essential amino acid.

Why is glutamine important?

Glutamine plays several important roles in the body, both on its own and via its conversion to glutamic acid (glutamate).

As an amino acid, glutamine is incorporated into larger protein chains. Glutamine also stimulates protein synthesis by activating a signalling pathway known as the mTOR pathway. To read more about this pathway, please consult the Protein synthesis and hypertrophy (mTOR) blog.

For cells and enzymes to function properly, the pH (a measure of acidity/alkalinity) of our blood and tissue fluid has to be kept within a strict range.

We call this our body’s acid-base balance. The way our body regulates pH is complicated, but partly involves the movement of acids and bases (alkaline substances) by our kidneys. One of these bases is ammonia (NH3), which acts to neutralise or “buffer” acids and prevent our blood from becoming too acidic.

Ammonia is generated from ammonium (NH4), which in turn is made from glutamine. By creating ammonium, glutamine helps to maintain a healthy acid-base balance and keep our blood pH within normal range.

As with glutamic acid (glutamate), glutamine is involved in many metabolic reactions within cells. For example, glutamine is used to make molecules called purines. Purines include the nucleotide bases adenine (A)and guanine (G), which are important components of our DNA.

Glutamine (GLN) can also be converted in glutamic acid (glutamate). This reaction is catalysed by the enzyme glutaminase. By providing a supply of glutamate (GLU), glutamine is also indirectly involved in many metabolic reactions, such as the production of glutathione and the generation of energy in the citric acid cycle (both explained earlier). Glutamine is important in protecting cells against damage from oxidative stress. We’ve already mentioned that glutamic acid (glutamate), which can be formed from glutamine, is used in the production of glutathione – an important antioxidant.

Glutamine also stimulates the production of specialized proteins called heatshock proteins. These proteins are produced by cells in response to various stressors in the environment, such as heat, infection and oxidative stress. Heatshock proteins act as "molecular chaperones” – they protect, transport and assist with the refolding of damaged proteins.

By stimulating the manufacture of heatshock proteins, glutamine may help to prevent and repair damage caused by oxidative stress.

Glutamine plays a role in various signalling pathways by which cells communicate with each other and coordinate key functions. On this note, glutamine is involved in the secretion of insulin.

As we learned in the Insulin and your blood glucose levels blog, insulin is a hormone that allows glucose to be taken up from the bloodstream into cells. Glutamine is therefore important for the control of blood sugar levels. How is glutamic acid (glutamate) converted into glutamine?

This reaction is catalysed by the glutamine synthetase (GS) enzyme. The GS enzyme is encoded by your GLUL gene.

As we’ll explain in the next section, variants of your GLUL gene affect how much GS enzyme you produce (express). This influences how effectively your cells make glutamine and (as it can be derived from glutamine by hydrolysis) glutamate.

A SNP (Single Nucleotide Polymorphism) near the GLUL gene causes a change in the DNA sequence from the letter ‘C’ to the letter ‘T’.

This SNP (given the code rs10911021) therefore creates two gene variants or alleles – the ‘C’ allele and the ‘T’ allele.

Studies suggest that the ‘C’ allele of the GLUL gene is associated with decreased expression (i.e. production) of the glutamine synthetase (GS) enzyme.

By contrast, people with two copies of the ‘T’ allele (i.e. the TT genotype) had normal GS expression and enzyme activity.

These alterations in GS activity are likely to affect the production and metabolism of glutamine and glutamate, which can have further effects on our health.

Some GLUL gene variants have also been linked to an increased risk of cardiovascular health problems, such as coronary artery disease, heart attack and stroke. Importantly, this link was only found in subjects with Type 2 diabetes.

For example, a large analysis of subjects from the Nurses Health Study and other studies found that diabetic subjects who carried the ‘C’ allele of the GLUL gene were more likely to have coronary heart disease. No association, however, was found between GLUL gene variants and heart disease in people without Type II diabetes.

It’s not clear how exactly GLUL gene variants affect the risk of cardiovascular disease. It is possible that, by interrupting the production of glutamine and glutamate, the risk ‘C’ allele makes people more susceptible to oxidative stress, particularly the oxidative stress caused by high blood sugar levels (as seen in Type II diabetes).

On this note, a study of Pakistani patients with coronary heart disease and Type II diabetes found that the ‘C’ allele was significantly associated with markers of oxidative stress and damage to arterial lining (vascular endothelial dysfunction).