It belongs to a family of proteins known as ‘neurotrophins’. One of the overarching roles of neurotrophins is to allow the brain and nervous system to adapt and reorganize its structure in response to new experiences and stimuli in the environment. You may have come across this concept before under the term “neuroplasticity” and it underlies our ability learn and remember new things.

BDNF is central to neuroplasticity, with some of its main functions including:

Given its roles in these neuronal processes, BDNF is extremely important for cognition – an umbrella term for functions such as learning, memory, thinking, reasoning, regulation of emotion and processing information.

In this respect, BDNF is found in particularly high levels in the cortex and hippocampus – brain regions that mediate learning, memory and higher cognitive functions.

Why is BDNF important?

Several lines of evidence suggest that BDNF is crucial for learning, memory, emotion processing and other cognitive functions.

How is BDNF produced and secreted?

BDNF is produced (synthesized) and secreted in an ‘on-demand’ fashion in response to nerve (neuronal) activity.

Neurons produce BDNF from a precursor protein called pre-proBDNF. Depending on nerve activity, pre-proBDNF is converted by enzymes into two further molecules: pro-BDNF and mature-BDNF (m-BDNF).

Both of these molecules are then packaged into special chambers called vesicles (or ‘intracellular vesicles’ as shown in the diagram below).

Vesicles containing pro-BDNF and mature (m-) BDNF are subsequently transported along nerves to their endings and towards synapses - the junctions between different nerves. When a nerve is stimulated, calcium enters the nerve, causing the vesicles to release the pro-BDNF and mature BDNF into the synapse.

Once released, Pro-BDNF and mature BDNF can then bind to various receptors, triggering longer term changes nerve growth and development.

While nerves produce and release a mixture of both pro- and mature BDNF, the ratio of these molecules varies according to the stage of development. Generally speaking, neurons within adult brains tend to release mature BDNF. Consequently, when we talk about BDNF, we are typically referring to mature BDNF in particular.

As mentioned earlier, BDNF helps to re-organise the structure of the brain by promoting the growth of new neurons and synapses, and by changing the strength of connections between various neurons.

To ensure these structural changes are matched to patterns of neuronal activity within the brain, the release of BDNF depends on whether or not a nerve is stimulated. We call this process activity-dependent secretion. 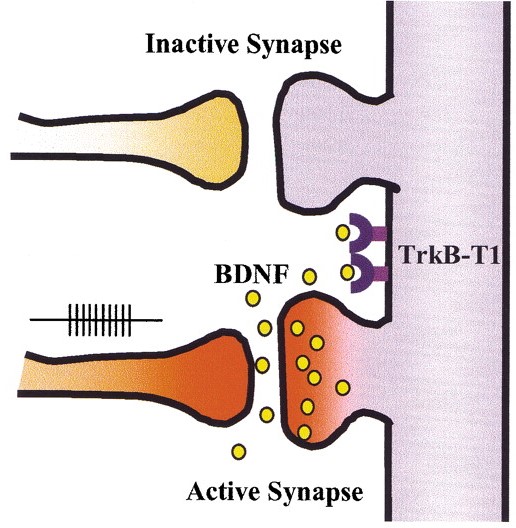 The beauty of this process is that it preferentially promotes the growth and development of those neural pathways which are active or stimulated. Similarly, the activity-dependent secretion of BDNF also allows active neurons to strengthen and forge new connections with one another. This principle (called Hebb’s law) is captured by aphorism, “cells that fire together, wire together”.

By modifying the structure of brain networks in response to stimulation, activity-dependent secretion of BDNF facilitates learning.

How do BDNF gene variants affect secretion of BDNF?

The BDNF protein is encoded by your BDNF gene. Variants of this gene can affect the secretion of BDNF in response to stimulation of a neuron (i.e. activity-dependent secretion).

More specifically, a SNP (Single Nucleotide Polymorphism) within the BDNF gene causes a change in the DNA sequence from the letter ‘G’ to the letter ‘A’.

As explained in previous blog posts, the precise sequence of letters in our DNA code determines the type and sequence of amino acids used to build proteins. In turn, the amino acid sequence of a protein strongly affects its structure and function.

In the case of the BDNF gene, the G-->A SNP (to which we ascribe the number rs6265), causes a change in amino acid from valine (Val) to methionine (Met) at a specific point in the BDNF protein.

This change in amino acid from valine to methionine causes the BDNF protein to fold incorrectly. As a result of this improper folding, the process of packaging BDNF into vesicles becomes impaired. Consequently, when a nerve (neuron) is stimulated, the vesicles in nerve endings release less BDNF into synapses.

In other words, the SNP in the BDNF gene reduces the activity-dependent secretion of BDNF protein by neurons.

The ‘G’ allele codes for valine at a specific point in the BDNF protein, which is associated with normal protein folding and, subsequently, normal secretion of BDNF protein from nerve endings.

As we inherit two copies (or alleles) of each gene, the G-->A (rs6265) SNP generates three different gene combinations (or ‘genotypes’). In turn, each genotype is linked to a different degree of activity-dependent secretion of BDNF:

Given that the activity-dependent secretion of BDNF underlies learning, memory, emotion processing and other cognitive functions, your BDNF genotype can influence cognitive performance.

For example, one study found that older adults with the GA and AA genotypes (and therefore reduced BDNF secretion) scored significantly lower than those with the GG genotype on certain verbal memory tests.

Other studies suggest the ‘A’ allele may increase the risk of depressive symptoms, particularly in response to stressful life events.

Several lifestyle measures, including exercise, diet and sleep, can all lead to increases in BDNF secretion, which, in turn, are associated with improvements in cognitive function.

Exercise in particular has been shown extensively to cause short-term elevations in BDNF levels, ranging from 2- to 3-fold.

Perhaps unsurprisingly, how your BDNF levels respond to exercise depends on which BDNF gene variants you inherit. For example, one study of older adults found that, compared to people with the GG genotype, those with the ‘A’ allele (i.e. AA and GA genotypes) experienced significantly greater rises in BDNF levels after a 16-week physical activity course.

Certain supplements and dietary regimes can also improve BDNF secretion. For more on how to improve BDNF activity, be sure to check out your trait Actions.