You’ve probably heard of adrenaline before. A scary movie, loud music and intense exercise are all often described as “getting the adrenaline pumping”.

Adrenaline (also called epinephrine) is the body’s “fight-or-flight” hormone. It prepares us to encounter (‘fight’) or escape (‘flight’) a threatening situation. Accordingly, adrenaline dilates our airways, increases our heart rate, elevates blood glucose levels and diverts blood to skeletal muscle, all of which allow us to react quickly to a perceived threat.

While predominantly functioning as a hormone (i.e. a chemical message transported in the bloodstream) that acts on multiple organs, adrenaline is also a neurotransmitter. Neurotransmitters are chemicals released by nerve endings, which transmit nerve impulses from one nerve to another across a synapse. What are the effects of adrenaline in the body?

The main purpose of adrenaline is to prime us to fight or escape a perceived threat (the so-called ‘fight-or-flight’ or acute stress response). As described below, the effects of adrenaline in the body reflect this purpose.

Suppose we encountered a threatening situation, say a dangerous animal. We may need to fend off the animal or to suddenly run away. In both these scenarios, our skeletal muscles would require a rapidly increased supply of oxygen and nutrients in blood to fuel muscle contraction. In this respect, adrenaline increases our heart rate, which means more blood is pumped per second to our working muscles.

In concert with this, blood flow is diverted away from tissues that are less urgently required in a threatening situation. For example, when we encounter a dangerous animal, we don’t want to waste energy on digesting food. In this sense, adrenaline reduces blood flow to organs such as the gut, skin and kidneys by narrowing the blood vessels supplying them (a process called vasoconstriction).

Partly as a result of increased heart rate and vasoconstriction, adrenaline also causes a temporary rise in blood pressure. This ensures there is an adequate pressure gradient for blood to flow down to supply muscles, the brain and other organs.

For more on blood pressure, heart rate and blood flow, check out the Nitric Oxide and Blood Flow article.

One of the key substances transported in the blood is oxygen. When faced with a threatening situation, tissues such our brain and skeletal muscles require more oxygen. This is then used to yield chemical energy from glucose through a series of reactions that we call aerobic respiration. In turn, this energy can fuel muscle contraction or nerve activity in our brain.

As well as increasing blood flow to the lungs, adrenaline causes the dilation of our large and small airways(bronchi and bronchioles, respectively). This is known as bronchodilation and it allows a greater amount of air to flow into our lungs and diffuse into blood capillaries. As a result, the level of oxygen in our blood increases and can be used to supply respiring tissues.

It isn’t just our muscles that require more energy during a threatening situation. In the scenario with a dangerous animal, we would need to remain extremely vigilant and keep our wits about us. This means our brain would have increased energy demands.

To provide this energy, levels of glucose in the bloodstream must be kept adequately high. Adrenaline achieves this in two ways:

Firstly, it stimulates the liver and skeletal muscle to break down glycogen (an energy storage molecule) into glucose, which is then released in the bloodstream. This process is known as glycogenolysis.

Some studies show that adrenaline released as part of our ‘fight-or-flight’ response enables fast-twitch muscle fibers to contract with greater force. In biological terms, we describe adrenaline as having a positive inotropic effect.

One well-known effect of adrenaline is to dilate our pupils, thereby letting more light into our eyes. This may allow us to be more vigilant of threats. 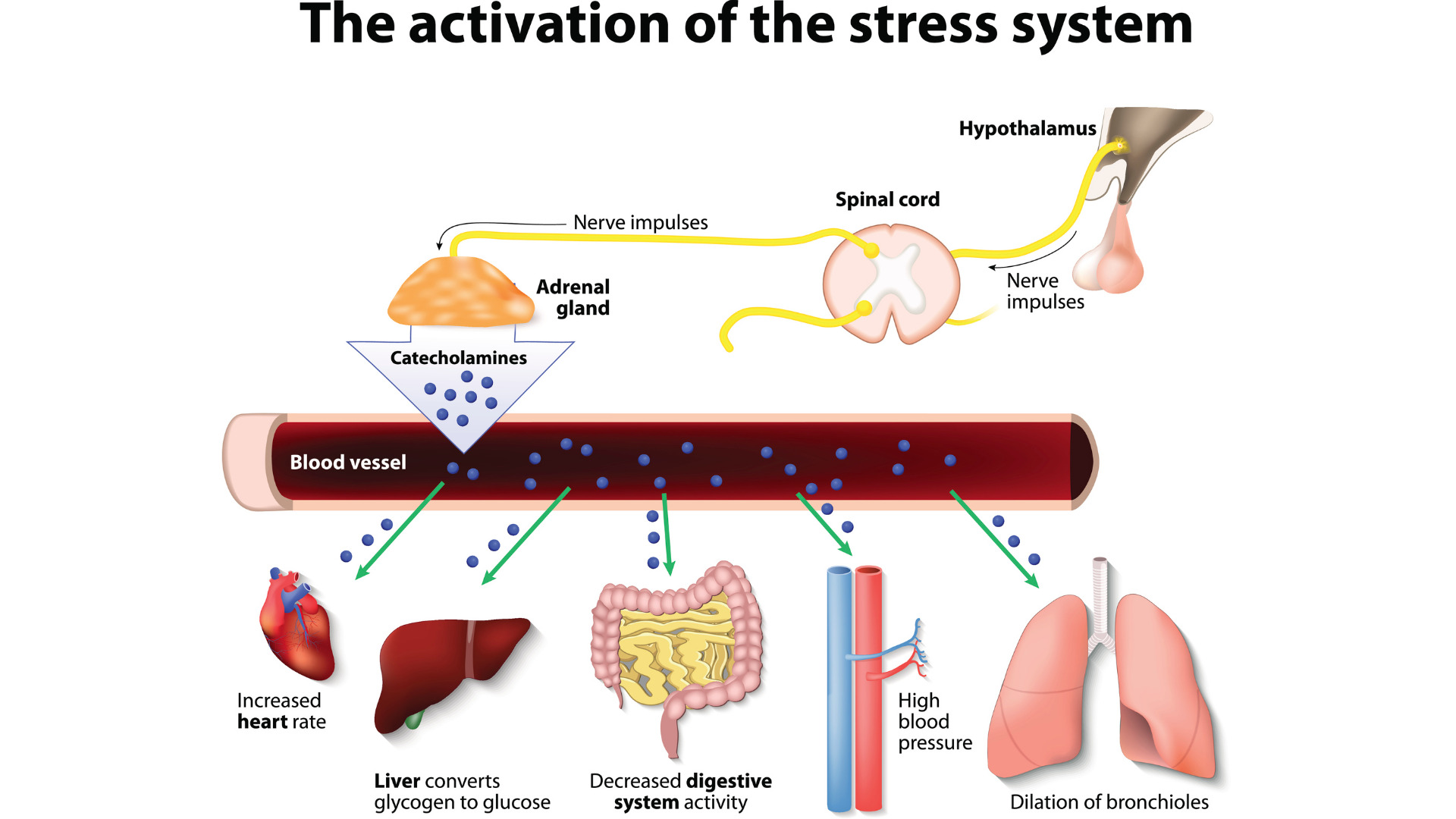 What is the role of adrenaline in exercise?

Physical exercise is considered by the body to be a stressor. Accordingly, we activate our ‘fight-or-flight’ response and release adrenaline during exercise.

Many of the effects of adrenaline (described above) are clearly beneficial during exercise. For example, increased heart rate, blood pressure and vasodilatation of local blood vessels allow greater blood flow to exercising muscles. Dilation of airways means we get enough oxygen to sustain aerobic exercise.

Similarly, the breakdown of glycogen by the liver ensures muscles have a steady supply of glucose to fuel muscle contraction.

Studies show that levels of adrenaline in blood plasma rise from baseline in response to both dynamic and static exercises. These rises in adrenaline vary according to the duration and intensity of exercise, with exercise intensity having a particularly pronounced effect. Generally speaking, the longer or more intense your workout, the greater the rise in blood adrenaline levels.

Following exercise, adrenaline levels quickly return to baseline. It remains a topic of debate, but some research suggests that trained athletes have higher baseline (or resting) levels of adrenaline as part of a long-term adaptation to training.

Where is adrenaline produced?

Adrenaline is produced by the adrenal glands.

More specifically, adrenaline is produced from the innermost layer of the adrenal glands, which is termed the adrenal medulla.

Your adrenal medulla contains specialized cells called chromaffin cells, which release adrenaline (and noradrenaline) into the bloodstream in response to nerve stimulation.

When faced with a stressor, a part of your brain called the hypothalamus activates the sympathetic nervous system, including those nerves supplying the adrenal glands. These nerves then stimulate chromaffin cells in the adrenal medulla to release adrenaline into the bloodstream.

How is adrenaline produced?

Adrenaline is derived from an amino acid called tyrosine.

Amino acids are the building blocks of protein and tyrosine is a non-essential amino acid (meaning it can be produced endogenously by the human body). We can make tyrosine by converting the amino acid phenylalanine, which in turn must be obtained from the diet as it an essential amino acid.

Within the adrenal glands, tyrosine is serially converted by various enzymes into different intermediary molecules, before ultimately being converted into adrenaline. Many of the enzymes responsible for producing adrenaline require another substance, called a cofactor, to function effectively.

Both the activity and availability of enzymes and cofactors can influence how well you synthesize adrenaline. As we’ll discover later, your genes can affect both these things. As the diagram shows, the first stage is the conversion of tyrosine into L-DOPA by the enzyme tyrosine hydroxylase (TH). This enzyme uses BH4 (tetrahydrobiopterin) as a cofactor. We’ve previously encountered BH4 in your BH4 Synthesis and Recycling Trait.

The second stage of adrenaline synthesis sees L-DOPA converted into dopamine, which is a neurotransmitter in its own right. This reaction is catalysed by an enzyme called DOPA decarboxylase (also known as aromatic L-amino acid decarboxylase). It requires the active form of Vitamin B6, pyridoxal phosphate, as a cofactor.

Dopamine is next converted into another neurotransmitter, noradrenaline (norepinephrine), by the enzyme dopamine beta hydroxylase (DBH). DBH uses Vitamin C (ascorbate) as a cofactor. An adequate intake of Vitamin C in your diet is therefore important for producing adrenaline.

In the final step, noradrenaline is turned into adrenaline by the enzyme phenylethanolamine N-methyltransferase (PNMT). This reaction requires a molecule called SAM (S-adenosyl methionine) as a cofactor.

Your PNMT enzyme is encoded by your PNMT gene. Interestingly, research shows that variations in the PNMT gene are associated with different levels of adrenaline in response to exercise.

How does adrenaline exert its effects in the body?

Adrenaline (and noradrenaline) work by binding to specialized receptors on the surfaces of cells known as adrenergic receptors.

When adrenaline binds to adrenergic receptors, it triggers a cascade of chemical reactions that go on to have various effects, depending on the type of receptor and the type of cell expressing that receptor.

For example, when adrenaline binds to β2 receptors on vascular smooth muscle in blood vessel walls, it causes the muscle to relax leading to vasodilatation and increased blood flow.

When adrenaline binds to β1 receptors on heart muscle, it speeds up our heart rate.

As we will explore in future traits, the effects of adrenaline in the body are also influenced by the quantity and activity of adrenergic receptors on cell surfaces. How is adrenaline degraded?

Unlike other hormones (e.g. cortisol), adrenaline doesn’t inhibit its own production as part of a negative feedback cycle. Instead it is metabolized and broken down by enzymes in various tissues, including the liver and nerve tissue.

There are two key enzymes involved in the breakdown of adrenaline: COMT (catechol-O-methytransferase) and MAO (monoamine oxidase). Together these metabolize adrenaline into a molecule called vanillylmandelic acid (VMA).

As well as metabolizing adrenaline, these enzymes also degrade the other catecholamines (noradrenaline and dopamine).

Why are baseline adrenaline levels important?

Baseline adrenaline levels refer to the amount of adrenaline circulating in your bloodstream at rest (i.e. not during exercise, and not in response other stressors).

If levels of adrenaline rapidly rise as part of your fight-or-flight response to exercise, it’s understandable to ask why baseline adrenaline levels matter?

Although higher baseline adrenaline levels may be linked to better exercise performance, long-term elevations of adrenaline may make you more susceptible to stress, anxiety and high blood pressure.

As described in the “How is adrenaline produced?” section, adrenaline is made from tyrosine in a series of chemical reactions. These chemical reactions are catalyzed (i.e. sped up) by various enzymes. It follows that the activity of these enzymes will affect how effectively we produce adrenaline. In this respect, variants of your PNMT gene influence your baseline levels of adrenaline.

Your COMT gene encodes the COMT enzyme that degrades adrenaline. Some variants of this gene are associated with reduced expression of the COMT enzyme. This may give rise to reduced breakdown of adrenaline and therefore higher baseline levels of adrenaline (as well as other catecholamines).

Similar to your COMT gene, variations in MAO genes (MAO-A and MAO-B) may affect the rate at which you degrade adrenaline and therefore influence baseline adrenaline levels.