Telomeres are stretches of DNA found at the end of chromosomes. (Chromosomes are thread-like structures, found in the nucleus of our cells, that are made up of a single, tightly coiled DNA molecule).

Telomeres are made up of repeated sequences of nucleotide bases (A, T, C, G - the basic building blocks of DNA).  In human cells, this repeated base sequence is TTAGGG.

Telomeres are sometimes likened to the plastic tips at the end of shoelaces. They serve to prevent the ends of chromosomes from fraying or fusing with one another. They also help to protect DNA in the rest of chromosome from being lost or damaged when cells replicate. As we’ll explore in this trait article, changes in the length of telomeres can shed light on how quickly our cells age.

What is the function of telomeres?

There are three key functions of telomeres:

It is this last function of telomeres that is of relevance to ageing.

How do telomeres protect DNA?

For tissues to grow and develop, individual cells need to divide and replicate. In order to do this, cells first need to make an identical copy of their DNA / chromosomes, which contains all the genetic instructions for newly formed cells to function.

During the process of copying DNA, however, some bases (A, T, C, G) at the very end of the DNA molecule / chromosome get left out and are not copied. Research suggests that every time a cell replicates and copies its DNA, between 25 and 200 bases are lost, causing chromosomes to become shorter.

Consequently, every time a cell divides and replicates, more and more important genetic information will be lost. This could eventually lead to significant cell damage, as genetic instructions for essential proteins, molecules, and cell processes are lost. Biologists term this issue "end replication problem."

So, how do cells protect against this problem and the loss of important DNA code? Here’s where telomeres come in.

As they are just repeated sequences of DNA which do not code for key proteins, telomeres can be sacrificed every time a cell replicates. By losing the genetic material in telomeres, the more important DNA in the rest of the chromosome can be spared. The result of this is that each time a cell replicates and DNA is copied, telomeres (shown in red in the diagram above) get shorter and shorter, while the rest of DNA (shown in blue) is protected and remains intact. This is shown in the first three stages of the diagram above.

As explained in the previous section, in order to protect more important DNA in the chromosome from being lost, telomeres get sacrificed and become shorter with each cycle of cell replication.

At some point, however, telomeres will become so short that important genetic information starts to get lost as cells replicate. (As we’ll discuss in the next section, this can cause a cell to become inactive and stop dividing or die). In order to get around this issue, certain cells in our body produce an enzyme, called telomerase, that adds more repeat sequences to the end of telomeres. By doing this, telomerase prevents telomeres from becoming shorter. By contrast, most other cells in the body have little to no telomerase activity. Consequently, telomeres in these cells get progressively shorter as cells divide.

Why do telomeres get shorter over time?

As mentioned earlier, most cells in our body have very little telomerase activity, resulting in telomeres becoming shorter over time as cells divide and replicate.

There are two main processes that contribute to the shortening of telomeres:

The first process is the ‘end replication problem’, previously described, whereby DNA at the ends of chromosomes is not copied each time a cell replicates. Consequently, telomeres (located at the end of chromosomes) become shorter as cells divide and we get older.

It’s thought that this end replication problem causes telomeres to shorten by about 20 base pairs every time a cell replicates. The DNA sequences in telomeres are particularly susceptible to damage from oxidative stress, partly because the ends of chromosomes are less easily repaired by cells’ DNA repair mechanisms. Damaged DNA in telomeres is not properly copied and so is lost as cells replicate.

It’s thought that oxidative stress contributes to the loss of 50-100 base pairs per cell division.

Throughout our lifetime, as cells in our body accumulate damage from oxidative stress as we get older, telomeres get shorter and shorter. On this note, lifestyle factors that promote oxidative stress, such as smoking, exposure to pollutants, and lack of exercise, can all cause telomere shortening.

What is the link between telomere shortening and ageing?

In the previous section we described how telomeres get progressively shorter as cells replicate and accumulate damage from oxidative stress.

Due to this shortening process, at some point, telomeres will become so short that any further cell replication will cause a loss of important genetic material and irreparable damage to cells.

To avoid the replication and build-up of damaged cells, when telomeres shorten to a certain ‘critical length’, cells receive a signal to stop dividing. They either enter a state of senescence, whereby they permanently stop dividing and growing, or they die through a process of programmed cell-death known as apoptosis. 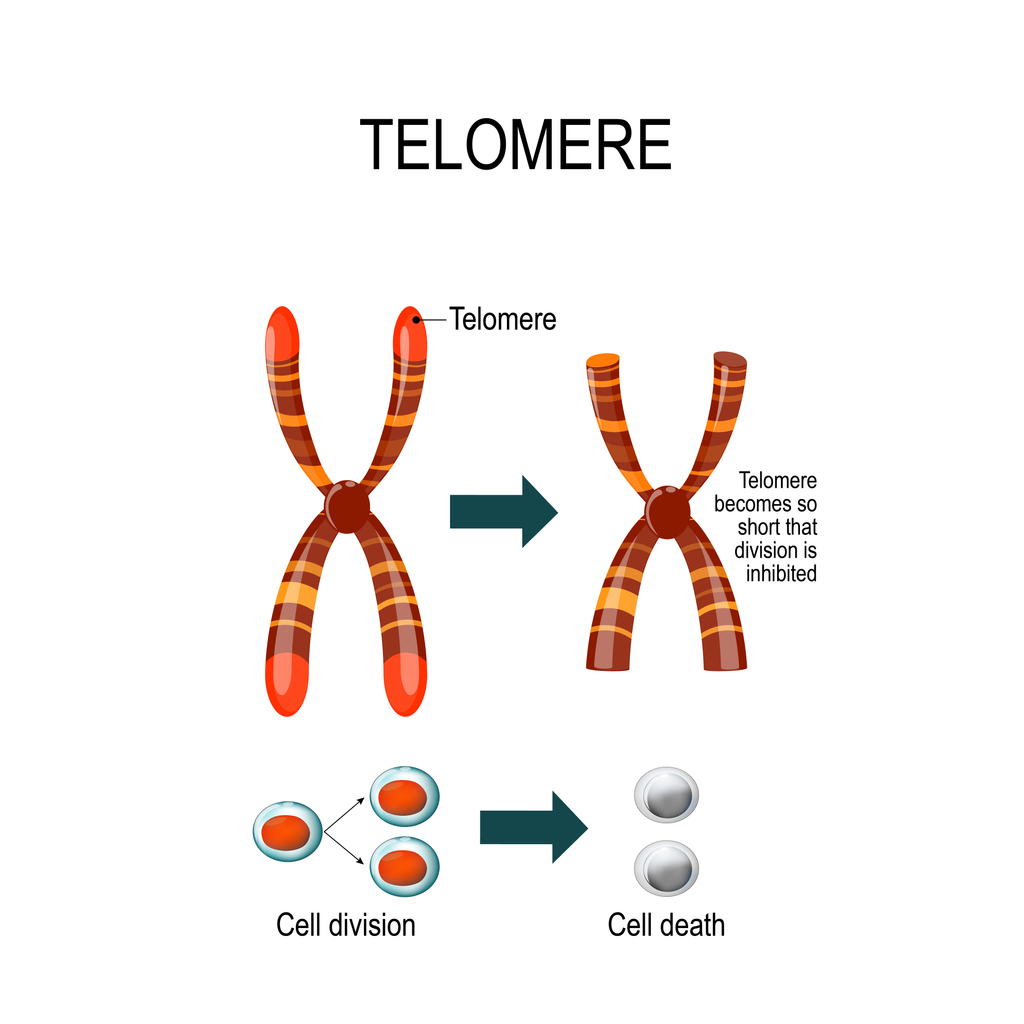 Given the above constraints, it’s thought that the lifespan of a cell is strongly influenced by the length of telomeres, with ageing linked to the process of telomeres getting progressively shorter and reaching their critical length.

It’s important to note, however, that it isn’t perfectly clear whether telomere shortening causes or is merely a marker of cell ageing. Furthermore, several other factors, such as dysfunction of mitochondria and damage to other molecules, are also thought to contribute to ageing.

What happens to telomere length as we get older?

The length of telomeres gets progressively shorter as we get older.

In this respect, telomere length may be a useful marker of our biological age. It is sometimes referred to as a ‘telomeric clock.’

Across our lifetime, as cells continue to replicate and we accumulate damage from oxidative stress (both of which cause telomere shortening) the length of telomeres decreases. Studies suggest that we lose somewhere between 15 and 50 base pairs per year. The graph above illustrates how telomere length decreases with age (pink line = females, blue line = males). Note how telomeres rapidly shorten in the first years of life and also more quickly (denoted by a steeper gradient) in the first two decades of life. This is because early life is characterised by rapid growth and cell replication, which contributes to telomere shortening.

Different cell types have different telomere lengths, which shorten at slightly different rates. Scientists, however, tend to use the length of telomeres in white blood cells (leukocytes) to assess overall changes in telomere length in humans.

What does telomere length tell us about our speed of ageing?

Rather than the absolute length of our telomeres at one point in time, it is the change in telomere length over time that sheds light on how fast our cells are ageing.

Under this view, if we take two people of the same chronological age, the person with the shorter telomere length (at a particular point in time) may be assumed to be biologically older because they have experienced a greater rate of telomere shortening.

We need to be careful before making this inference, however. This is because we are not all born with identical length telomeres. 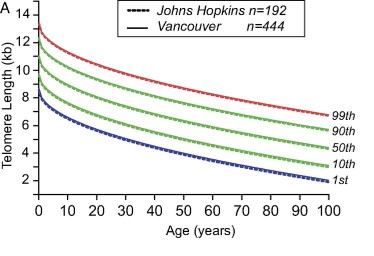 Nevertheless, telomere length that is shorter-than-average for a particular age group has been associated with reduced longevity and a greater risk of death from cardiovascular disease.

This tentatively suggests that shorter-than-average telomere length is a marker of accelerated ageing.

What is the TERC gene?

The TERC gene codes for a subunit of the telomerase enzyme.

As described earlier, telomerase is an enzyme that adds repeat sequences to telomeres, thereby helping to maintain their length and prevent them from shortening.

The TERC gene codes for a part of the enzyme known as the telomerase RNA component, which serves as a template for making the telomere repeat sequences.

What TERC gene variants do you analyse?

Your Telomere-linked aging (TERC) trait looks at different SNPs (Single Nucleotide Polymorphisms) in and around the TERC gene.

One of the key SNPs analysed is designated rs12696304, which causes a C à G change in the TERC gene DNA code. This therefore creates two different TERC gene variants or alleles: the ‘C’ allele and the ‘G’ allele.

As we’ll explain in the next section, the ‘G’ allele is associated with shorter telomere length and accelerated ageing.

How do TERC gene variants affect telomere length and speed of aging?

Several studies suggest that the ‘G’ allele of the TERC gene (created by the rs12696304 SNP) is associated with shorter telomere length.

This link has been demonstrated in different populations, including in European, Danish, Kuwaiti, and Han Chinese subjects.

Shorter telomere length in ‘G’ allele carriers suggests that this gene variant is linked to an increased rate of telomere shortening. This, in turn, is suggestive of accelerated cell ageing.

On this note, the same study found telomeres to shorten at a rate of about 21 base pairs per year. Given this rate of telomere shortening, inheriting one ‘G’ allele (associated with telomeres that are 75 base pairs shorter) is linked to an additional 3.6 years of ageing.

Similarly, inheriting two ‘G’ alleles (linked to telomeres that are 150 base pairs shorter) is equivalent to 7.2 years of additional aging.

As stated earlier, it could also be the case that the ‘G’ allele is simply associated with shorter telomere length at birth and not necessarily with an increased rate of telomere shortening (which would imply accelerated aging). Some studies suggest this is not in fact the case.

As the graph below shows, this was exactly the case, with carrying one (GC) or two (GG) copies of ‘G’ allele associated with progressively lower LTL:MTL ratios.

It is thought therefore that the shorter telomere length associated with the ‘G’ allele of the TERC gene is due to an increased rate of telomere shortening and accelerated ageing. The reasons behind this association are unclear, although it may involve changes in the activity of telomerase.

Your Telomere-linked ageing (TERC) trait analyses variants of your TERC gene (including rs12696304).

Based on your gene variants, you will be placed into one of three categories: