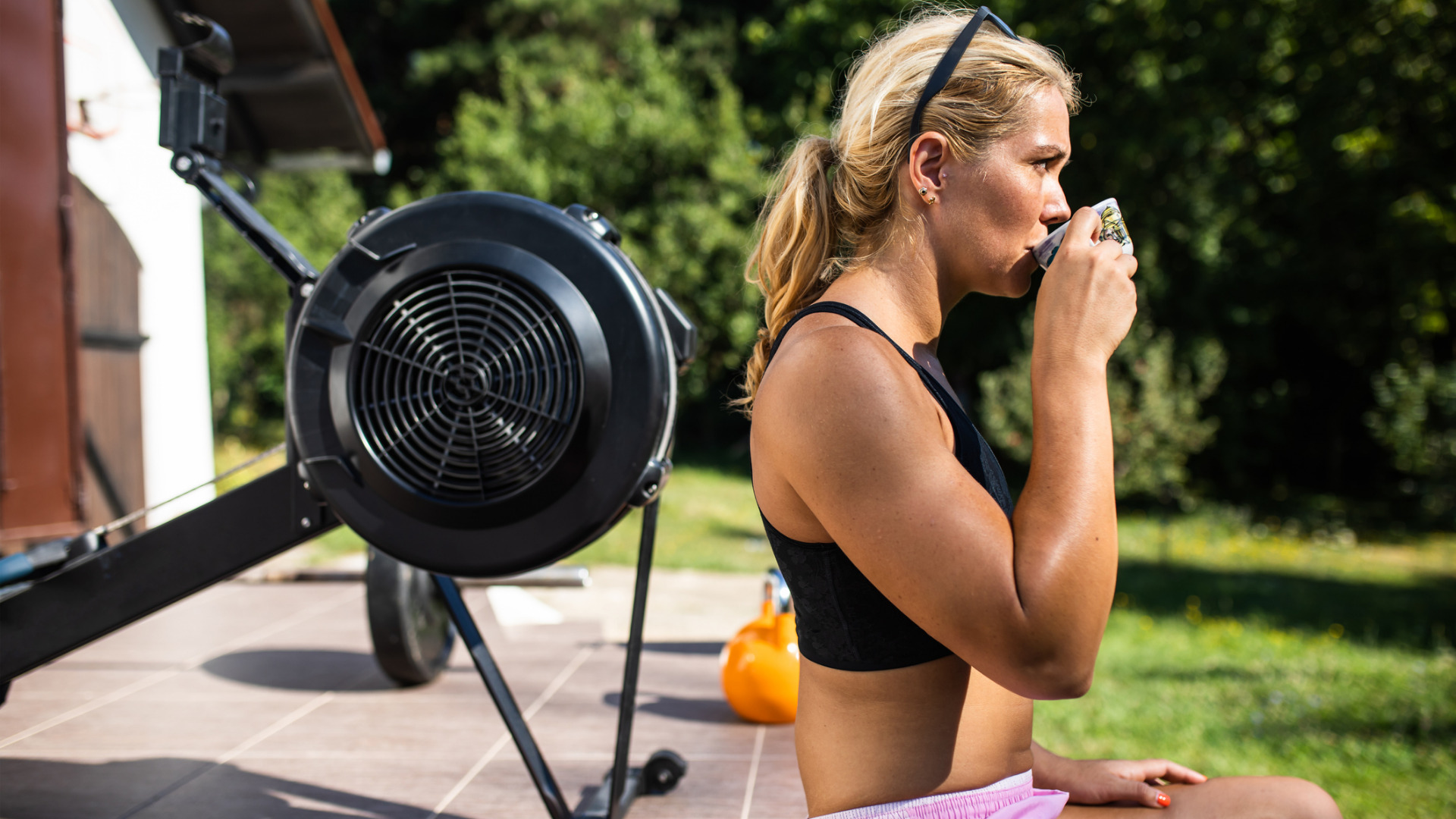 This article will focus mainly on the effects of CYP1A2 variants on endurance performance. Readers are advised to visit the Caffeine and muscle building article for a more thorough background on caffeine’s effects on athletic performance, how caffeine is metabolised, what the CYP1A2 gene is, and how CYP1A2 gene variants affect caffeine metabolism.

Does caffeine help with endurance performance?

Caffeine is a well-established ergogenic aid, a substance that can enhance athletic performance, with these performance-boosting effects typically greater for endurance activities that involve prolonged aerobic exertion rather than strength or power activities.

Since time immemorial, professional cyclists have sipped espresso before an event in order to maximise effort over long periods of time and increase their speed. Consonant with such received wisdom, several well-conducted studies in runners, cyclists, swimmers, cross-country skiers, and other endurance athletes have shown that a caffeine dose of 3-6 mg / kg bodyweight before or during exercise can improve endurance performance by between 2-4%.

A good review of these studies can be found in a 2021 literature review published by the International Society of Sports Nutrition.

On this note, a 2019 meta-analysis compiling the results of 40 placebo-controlled studies found that caffeine improved performance by between 3% and 16% compared to placebo. About 80% of these analysed studies were in cyclists and 93% of subjects were male.

Researchers also calculated a statistic known as Cohen’s d - a measure of something called 'effect size'. In simple terms, Cohen’s d in this study essentially compares the mean performance (for instance time taken to complete a 10km cycling time-trial event) in caffeine and placebo groups, allowing use to quantify how big of an effect caffeine has. The researchers found that overall, Cohen's d for caffeine was 0.33. This is illustrated in the Forest plot below. Source: Shen, J. G., Brooks, M. B., Cincotta, J., & Manjourides, J. D. (2019). Establishing a relationship between the effect of caffeine and duration of endurance athletic time trial events: A systematic review and meta-analysis. Journal of science and medicine in sport, 22(2), 232-238.

To put some context around this figure, a rough rule of thumb is that a Cohen’s d of 0.2 indicates a small effect, 0.5 = medium effect, and 0.8 = large effect. Using this rough framework, caffeine can be said to have a small-to-medium effect on endurance performance.

Furthermore, the effects of caffeine on endurance performance seem to be linearly related to duration. Put simply: the longer the endurance event, the larger the benefit of consuming caffeine. Specifically, the researchers calculated that a 30 minute increase in event duration would increase Cohen’s d for caffeine by 0.150. This relationship may be due to caffeine’s ability to stave off fatigue, which becomes more of a factor over longer duration events. It also explains why ultramarathoners, IRONMAN triathletes and other ultra-endurance athletes tend to be fond of caffeine during races.

Why does caffeine enhance endurance performance?

As described in much further detail in the Caffeine and muscle building article, caffeine’s performance-enhancing effects largely arise from its stimulation of the central nervous system (brain and spinal cord).

There is also some evidence that caffeine has direct effects on skeletal muscle. One of the key mineral ions needed for muscle fibres to contract is calcium. Gradual depletion of calcium inside muscle cells can cause fatigue and impair the force of muscle contractions. By promoting calcium release from stores within muscle cells (known as calcium-induced calcium release), caffeine can counteract depletion of calcium and help to stave off fatigue. This allows people to sustain activity for longer. 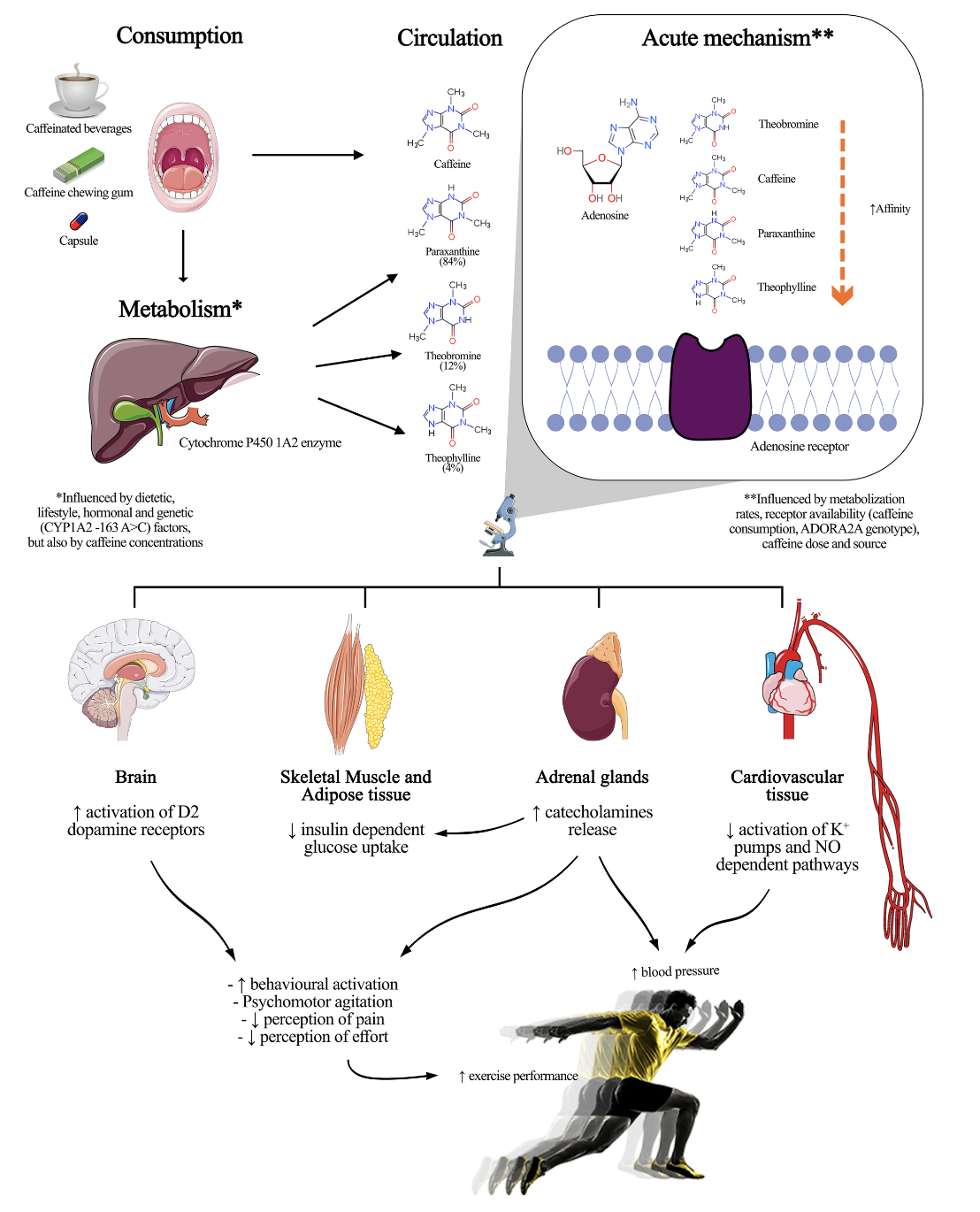 The role of paraxanthine

Much of caffeine’s ergogenic effects in the body may therefore be due to the secondary generation of paraxanthine.

It used to be thought that caffeine enhanced endurance performance by stimulating the release of adrenaline, which, in turn, promotes the burning of fat for energy (fat oxidation). By promoting muscles’ use of fat as a fuel source, the hypothesis goes, caffeine allows muscles to spare glycogen (a different fuel source), supporting longer exercise efforts.

Alas, studies have failed to support this hypothesis. For example, studies have failed to show differences in blood levels of fatty acids (which are formed from the breakdown of stored fat) when consuming caffeine before and during exercise. Similarly, caffeine also seems to help short bouts of exercise, where the impact of sparing glycogen is minimal. Furthermore, low doses of caffeine (e.g. 1-3 mg/kg) have minimal effects on fat and glucose metabolism, yet nevertheless seem to enhance athletic performance.

For these reasons, the general consensus is that caffeine’s endurance-enhancing effects are mostly due to its action on the central nervous system and not due to changes in fat and carbohydrate metabolism.

How do CYP1A2 gene variants affect endurance response to caffeine?

Variants of the CYP1A2 gene affect how quickly we break down caffeine, which, in turn, may influence the magnitude of endurance performance benefits we get from taking caffeine.

We’ve previously described in the Caffeine and muscle building article how CYP1A2 gene variants affect the inducibility and activity of the CYP1A2 enzyme, and how this affects the rate at which we metabolise or break down caffeine.

(It’s worth pointing out that some studies more simply classify people into fast (AA) and slow (AC + CC) metabolisers based on CYP1A2 genotype). In the study, 101 male athletes had their CYP1A2 genotype analysed and were then randomly assigned to receive either a caffeine pill containing 2 or 4 mg of caffeine / kg body weight or a placebo (i.e. 0 mg / kg of caffeine). Following a 25 minute waiting period after ingesting the pill and a brief warm-up, the athletes then performed a 10km time-trial (TT) on a stationary bike.

Analysing all genotypes together, 4 mg / kg bodyweight of caffeine was found to effect a 3% (about 30 second) improvement in 10km time-trial time compared to placebo. When the researchers took a deeper look at individual CYP1A2 genotypes, however, they found that the 4 mg/kg bodyweight dose of caffeine affected people differently. As can be seen in the graphs above, those with the AA genotype (i.e. fast metabolisers) improved their 10 km time by 6.8% (about 1 min 12 seconds) when taking the 4 mg/kg bodyweight dose of caffeine compared to placebo. Incidentally this group also responded to the lower caffeine dose of 2 mg/kg bodyweight, recording a 4.8% (48 second) improvement in time.

Those with the AC genotype (intermediate metabolisers) did not have any statistically significant change in performance with either 2 or 4 mg / kg bodyweight doses of caffeine, experiencing neither an improvement or worsening in 10 km time.

The CC genotype, who are classified as slow metabolisers, experienced a worsening of performance with 4 mg / kg bodyweight of caffeine, taking, on average, 13.7% (2 mins 30 seconds) longer to complete the 10 km time trial.

Recall that one of the mechanisms by which caffeine can enhance athletic performance is by reducing the perception of effort during physical activity, making exercise seem easier.

To assess whether CYP1A2 genotype influenced this phenomenon, the researchers in the above Guest et al (2018) study also recorded athletes’ ratings of perceived exertion (RPE) at regular intervals during the 10km time trial. RPE is a measure of how intensely you subjectively feel you are exercising, with higher ratings corresponding to feelings of harder exertion. Below is an example of Borg's RPE scale, which is widely used in sports science studies.

We need to be careful, however, before applying the results of this study to the wider population - i.e. to people like you and me. Note that the subjects in the Guest et al. (2018) study were all male, tended to be young (mean age = 25 +/- 4 years), and were more physically active than the average person (subjects were all competitive athletes (e.g. university-level) in a mixture of sports). The subjects were therefore not representative of the wider population. Using the scientific lingo, we say that the study lacks external validity (in particular, population validity).

Furthermore, it is important to also note that some prior studies have found that CYP1A2 genotype does not affect endurance response to caffeine. These studies, however, suffered from small sample sizes, suboptimal caffeine doses, or inappropriate measures of endurance.

Larger placebo-controlled clinical trials in the general population (making sure to include women) would shed more light on the effect of CYP1A2 genotype on endurance response to caffeine. Studies involving women are particularly important because there is evidence that CYP1A2 enzyme activity tends to be lower in females than in males, which may alter the impact of CYP1A2 genotype.

Similarly, we know that smoking, heavy caffeine consumption, and diets high in cruciferous vegetables (e.g. broccoli) can all induce and increase the activity of the CYP1A2 enzyme. These lifestyle factors may also alter the effects of caffeine on endurance performance and modify the effect of CYP1A2 genotype. For example, a slow metaboliser may potentially compensate for reduced CYP1A2 activity linked to their CC genotype if they’re a long-term, heavy caffeine consumer. Speculatively, this could help slow metabolisers reap some benefits from caffeine on their endurance performance.

Why might CYP1A2 variants affect endurance response to caffeine?

Two mechanisms that have been proposed in the scientific literature are:

Let’s take a look at both these posited mechanisms individually.

As described in the Caffeine and muscle building article, 84% of caffeine is broken down into the metabolite paraxanthine. Like caffeine, paraxanthine is an adenosine A2A receptor antagonist. (In fact, paraxanthine is shown to have a greater binding affinity to this receptor than caffeine, making it a more potent blocker).

By blocking adenosine receptors and thereby stimulating D2 receptors and dopaminergic activity in the central nervous system, paraxanthine may be responsible for the bulk of caffeine’s performance-enhancing effects (e.g. reduced perception of exertion, reduced feelings of muscle fatigue). 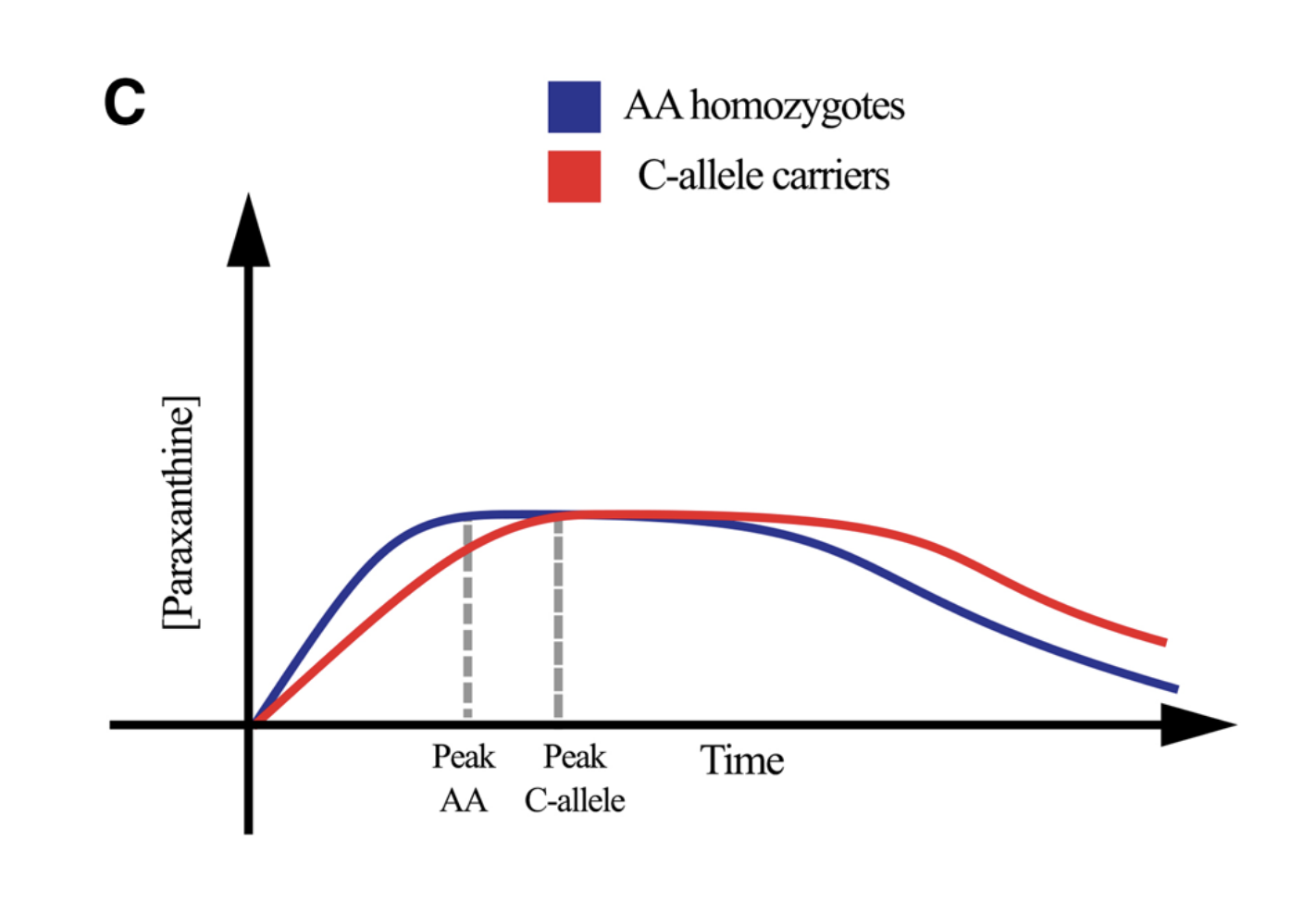 It is worth pointing out here that this purported mechanism is purely hypothetical, with the few studies that have been conducted failing to demonstrate any significant difference in circulating paraxanthine levels between the different CYP1A2 genotypes.

- Blood flow to the heart

Ordinarily, stimulation of the adenosine A2A receptor promotes vasodilatation - widening of blood vessels, including the coronary arteries that supply the heart muscle. During exercise, as the heart muscle begins to work harder, formation of adenosine increases. This signalling molecule then binds to and stimulates the adenosine A2A receptor in the walls of the coronary arteries, causing these blood vessels to dilate, which increases blood flow to the heart. By blocking the adenosine A2A receptor, caffeine counteracts this exercise-induced vasodilation, leading to relatively lower blood flow to heart. (In the diagram above, this is described as reduced “net cardiac perfusion”).

Studies show that at rest, caffeine doesn’t seem to impair blood flow to the heart. During exercise, however, when the blood supply to the heart needs to be increased through vasodilation of the coronary arteries, caffeine seems to impede blood flow.

In this respect, as they break down caffeine less quickly, slow metabolisers may experience impaired blood flow to the heart for a longer time while exercising. This would lead to a detriment in endurance performance after consuming caffeine.

By contrast, as fast metabolisers break down caffeine more rapidly, they would less acutely suffer the negative effects of caffeine on blood flow to the heart. This effect, coupled with the previous mechanism whereby they generate the performance-enhancing metabolite paraxanthine more quickly, may explain why fast metabolisers experience greater endurance benefits with caffeine.