PC1/3 is short for prohormone convertase 1/3.

It is an enzyme which belongs to a class known as prohormone convertases. This class of enzymes are responsible for producing and activating various hormones from their precursor molecules.

PC1/3, in particular, plays a key role in the production of hormones and neuropeptides (signalling proteins that change the activity of neurons) in the brain.

Many of these hormones and neuropeptides linked to PC1/3 regulate our eating behaviour, largely by changing the activity of brain circuits that control appetite, food intake, and energy balance.

How is PC1/3 involved in the control of eating behaviour?

When it comes to brain regions that regulate eating behaviour, one of the most important areas is the hypothalamus. It is a small structure, deep in the centre of the brain, that plays a role in homeostasis – maintaining a stable internal environment within the body.

As well as maintaining stable body temperature, blood pressure, fluid and electrolyte balance, the hypothalamus also regulates our energy balance i.e. how much energy we take in via food, and how much energy we use for metabolic processes or store (e.g. as fat). 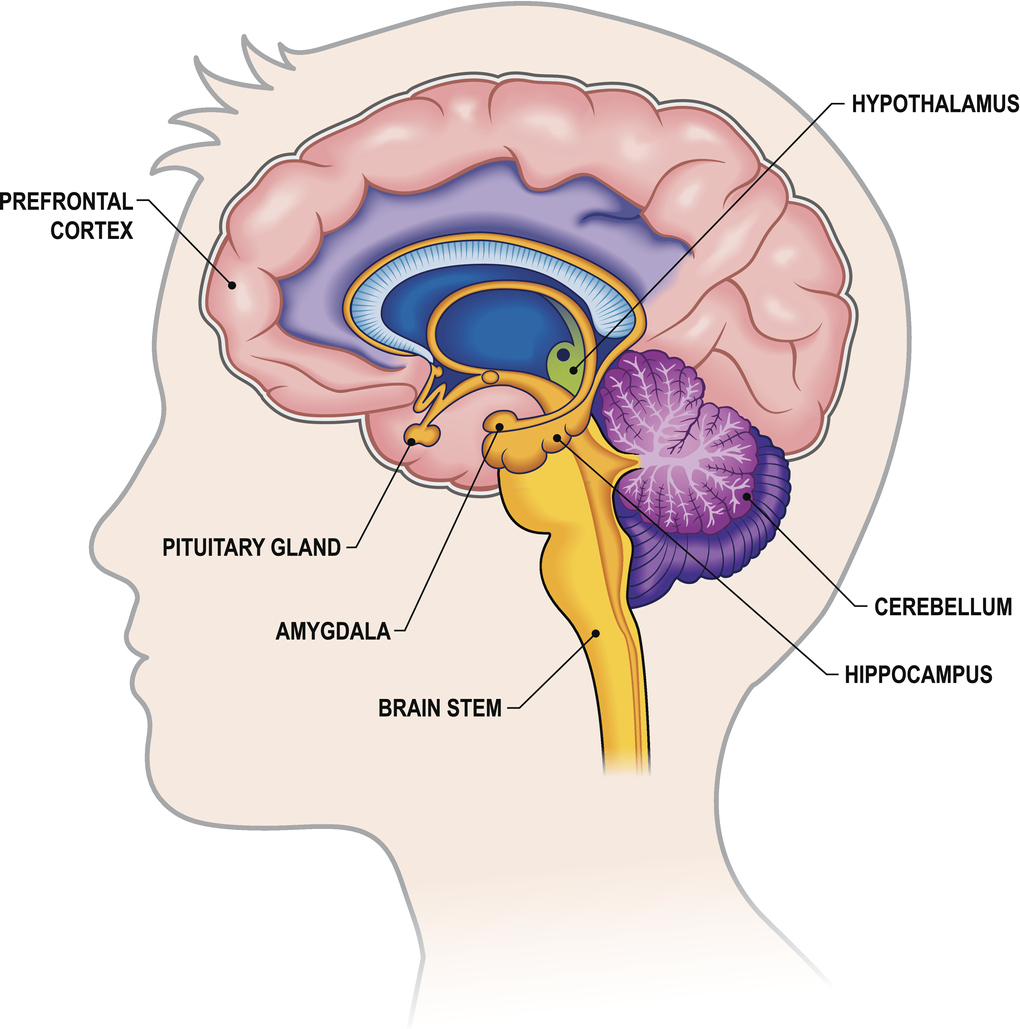 In particular, a part of the hypothalamus called the arcuate nucleus (ARC) contains two distinct populations of neurons that either stimulate or suppress food-intake:

When POMC neurons in the hypothalamus are stimulated, they produce an appetite-suppressing or “anorexigenic” hormone called α-MSH (alpha-melanocyte stimulating hormone).

α-MSH then binds to specialised receptors (called MC4R) on the surface of neurons in another part of the hypothalamus, the paraventricular nucleus (PVN). When α-MSH activates these PVN neurons, they act on wider brain circuits to reduce food intake and effect metabolic changes that increase energy expenditure. 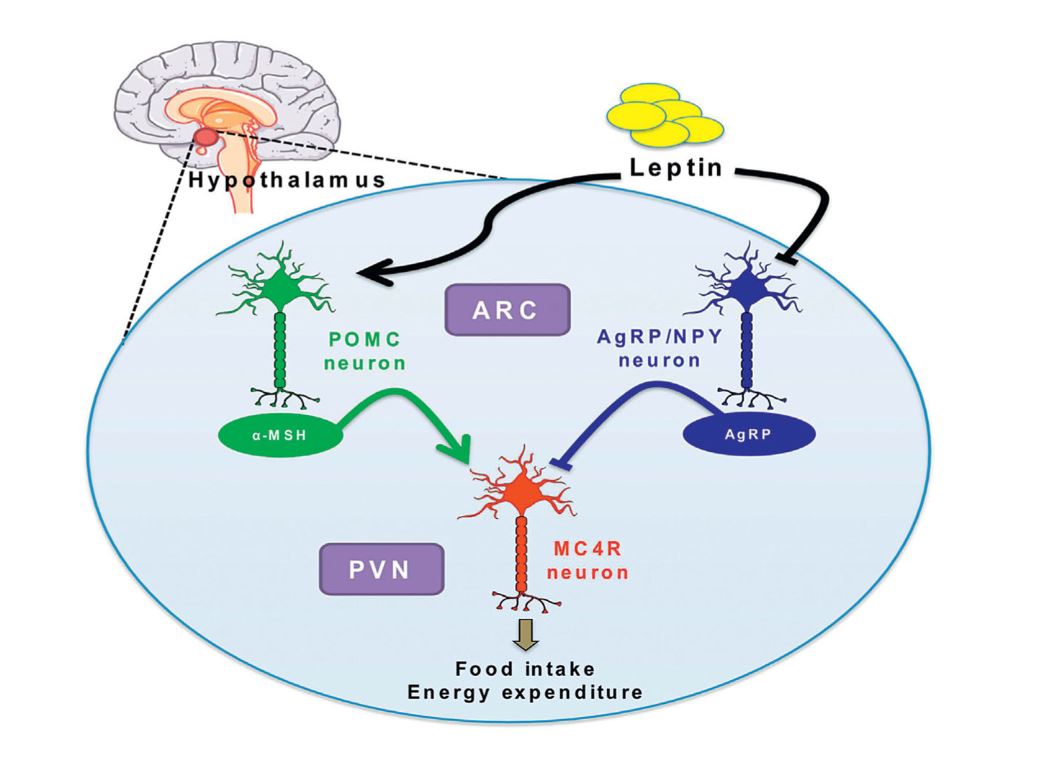 AgRP and NPY also bind to MC4R receptors on neurons in the paraventricular nucleus (PVN). However, in contrast to α-MSH, they inhibit activity in PVN neurons. This ultimately leads to the stimulation of appetite and the reduction of energy expenditure.

Aside from α-MSH, NPY and AgRP, other hormones / signalling molecules can also influence the activity of hypothalamic circuits that regulate food intake. For example, CART (cocaine- and amphetamine regulated transcript) acts to suppress food intake in a similar fashion to α-MSH.

But how does PC1/3 fit into this picture?

PC1/3 is required to make α-MSH, NPY, AgRP, and CART from their respective precursor molecules.

Both POMC and AgRP/NPY neurons in the hypothalamus express the PC1/3 enzyme, which allows them to make appetite-suppressing and appetite-stimulating hormones, respectively.

Studies in mice have highlighted the importance of PC1/3 in the control of eating behaviour. Mice that are genetically engineered to be deficient in the PC1/3 enzyme show reduced levels of α-MSH in their hypothalamus. Due to the lack of appetite-suppressing activity by α-MSH, these mice eat significantly more food and become obese.

Reduced PC1/3 enzyme activity has also been linked to obesity in humans. As we’ll describe in following sections, extremely rare mutations of the PCSK1 gene can cause total or near-total loss of PC1/3 enzyme activity. This, in turn, causes a childhood obesity syndrome characterised by extreme appetite (a phenomenon known as ‘hyperphagia’).

The PC1/3 (prohormone convertase 1/3) enzyme is coded for by the PCSK1 gene.

Mutations within this gene give rise to different PCSK1 gene variants, which can affect the activity of the PC1/3 enzyme and have an impact on eating behaviour and risk of obesity.

There are several different mutations within the PCSK1 gene that can alter the activity of the PC1/3 enzyme. Some of these mutations are rare, whereas others are more common.

Some extremely rare mutations can cause a condition known as ‘PCSK1 deficiency’. These mutations (e.g. c.1095 + 1G>A, illustrated in the diagram below) cause inactivation of the PCSK1 gene and, consequently, a total or near-total loss of PC1/3 enzyme activity.

Infants born with PCSK1 deficiency develop severe diarrhoea and malabsorption because they cannot produce active PC1/3 enzyme, which is used to make gut hormones that support absorption of nutrients.

After 2 years of age, children with PCSK1 deficiency demonstrate severe overeating and appetite (known as “hyperphagia”) and develop morbid obesity.

In this respect, your PCSK1 and overeating trait does not look at extremely rare PCSK1 gene mutations that cause PCSK1 deficiency. Instead, we analyse more common mutations. 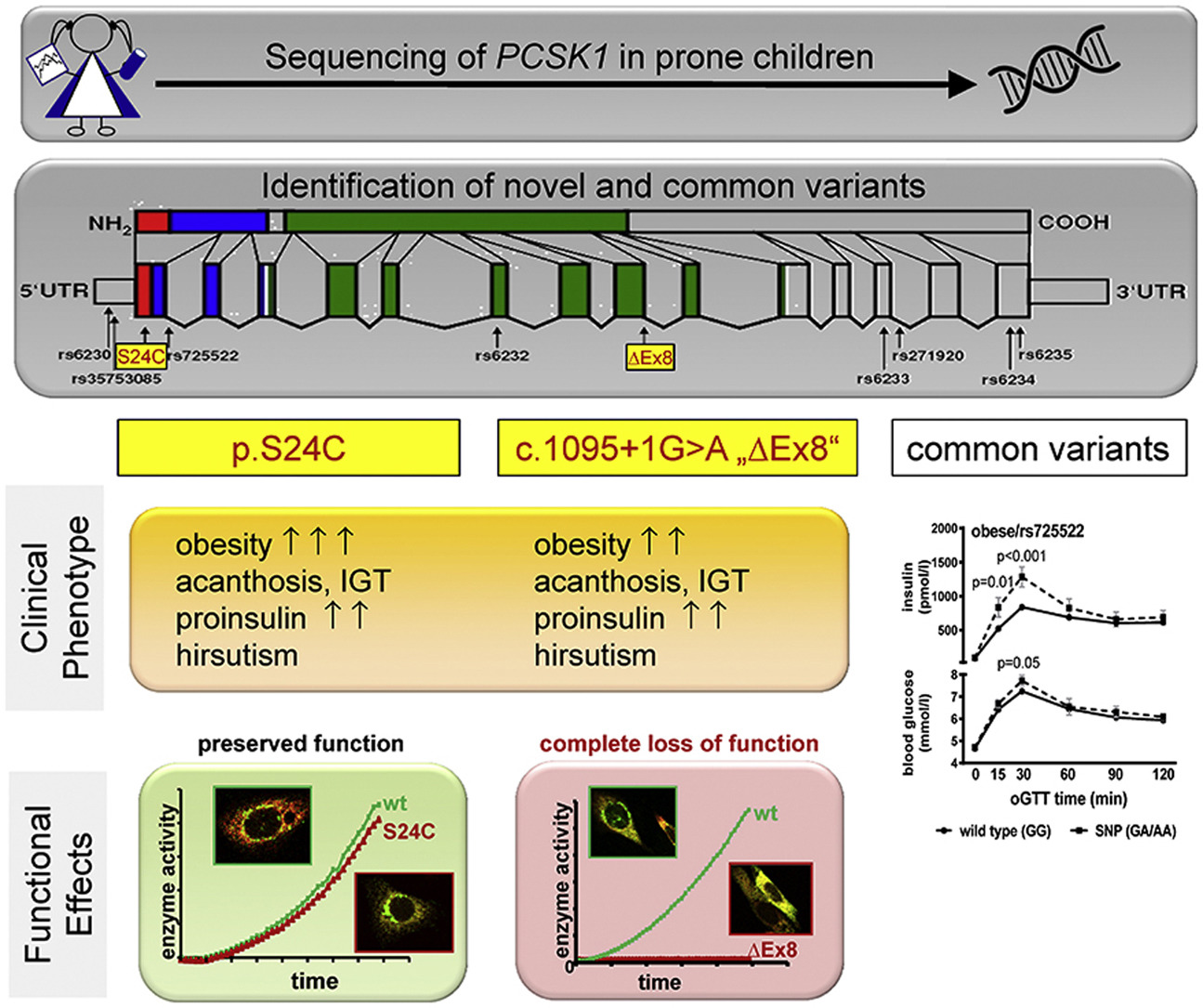 More common mutations within the PCSK1 gene can also impair PC1/3 activity and have been linked to a higher risk of obesity.

These mutations are all SNPs (Single Nucleotide Polymorphisms), which involve single letter changes in the DNA code of the PCSK1 gene. These, in turn, cause changes in the amino acid sequence of the PC1/3 enzyme, which can affect its structure, stability and enzymatic activity.

The PCSK1 and overeating trait looks at three common SNPs in the PCSK1 gene:

(In technical terms, we say they are in strong linkage disequilibrium. This means the mutations are very close to one another on the same chromosome, so tend to be coinherited together).

The rs6232 SNP causes an A-->G change in the DNA code, giving rise to two different PCSK1 gene variants or alleles: the ‘A’ allele and the ‘G’ allele.

The ‘G’ allele codes for a PC1/3 enzyme with significantly reduced activity, with one study suggesting a 30% reduction in activity. It is possible that this adversely affects the production of PC1/3-linked hormones and neuropeptides in the brain that regulate appetite and eating behaviour, resulting in overeating. Supporting this notion - as we’ll explore in the next section – the ‘G’ allele of the PCSK1 gene has been linked to a higher risk of obesity.

The ‘C’ allele is not thought to affect the catalytic activity of the PC1/3 enzyme but, instead, may affect the stability of the enzyme. This, in turn, may possibly alter the production of PC1/3-linked hormones and neuropeptides that regulate eating behaviour, leading to overeating.

On this note, the ‘C’ allele has been linked to a higher risk of obesity.

As mentioned previously, the rs6235 SNP if often co-inherited with the rs6234 SNP. Therefore, people who inherit the ‘C’ allele (rs6234) also invariably carry the rs6235 SNP (which causes a C-->G change in the DNA code).

How do PCSK1 gene variants affect risk of obesity?

One large meta-analysis, encompassing 331,175 individuals from different ethnicities, found that the ‘G’ allele (rs6232) was associated with a 15% higher risk of obesity. This is illustrated in the Forest plot below (overall OR = 1.15). Interestingly, however, this association varied according to ethnicity. The increased risk of obesity conferred by the ‘C’ allele was broadly similar for white Caucasian, Hispanic and African populations, but not present in East Asian populations. The underlying reasons for this difference in risk between ethnicities are unclear. The authors of the study suggest, however, that ethnicity-specific lifestyle factors (e.g. diet) are unlikely to be the culprit. It may, instead, be due to a modifying effect of other genes on the PCSK1 gene.

In terms of why the ‘G’ allele (rs6232) and ‘C’ allele (rs6234-6235) of the PCSK1 gene are linked to a greater obesity risk, again it isn’t clear. As alluded to in the previous section, these PCSK1 variants can alter the activity of the PC1/3 enzyme, which may have wider effects on the production of hormones/neuropeptides (e.g. α-MSH, NPY, AgRP, and CART) that regulate eating behaviour and energy balance.

What is leptin resistance and how does it affect my overeating risk?

Leptin is a hormone secreted by our fat cells that acts to reduce food intake and increase energy expenditure.

Part of leptin’s appetite-suppressing effects rely upon its activity in hypothalamic brain circuits that control eating behaviour. These are exactly the same circuits influenced by PCSK1 gene variants.

As mentioned in a previous section, the arcuate nucleus of the hypothalamus has two major populations of neurons that, respectively, suppress or stimulate appetite: POMC neurons and AgRP/NPY neurons.

When leptin binds to receptors in the hypothalamus, it stimulates POMC neurons and promotes the production of α-MSH, which ultimately leads to the suppression of appetite. Complementing this, leptin also inhibits AgRP/NPY neurons, reducing the production of AgRP and NPY (both of which are appetite-stimulating neuropeptides). As explained in the Leptin Resistance trait article, poor sensitivity or ‘resistance’ of the brain / hypothalamus to the appetite-suppressing effects of leptin can increase the risk of overeating.

For example, carrying excess body fat, which leads to higher circulating levels of leptin, can cause the brain to become desensitised to leptin over time. This means leptin less strongly activates POMC neurons in the hypothalamus, and therefore exerts less of an appetite-suppressing effect.

As well as carrying excess body fat, genetic factors (e.g. variants of the leptin-receptor gene [LEPR]) can also contribute to leptin resistance and increase the risk of overeating.

Given the above effects of leptin resistance on eating behaviour, your Leptin Resistance trait result is also factored in to your PCSK1 and overeating trait result.

Your PCSK1 and overeating trait

Your PCSK1 and overeating trait analyses common SNPs within the PCSK1 gene (rs6232 and rs6234-rs6235) and also factors in your Leptin Resistance trait result to assess your risk of overeating.

Depending on your genetic and lifestyle data, you will be classified into one of 4 bands: