What is SIRT1 and what does it do?

Sirtuins play an important role in altering the structure and activity of proteins once they’ve been manufactured: a process known as post-translational modification.

More specifically, sirtuins remove a molecule called an acetyl group from various proteins, including histones – proteins that add structural support to DNA and also play a role in how genes are switched on and off (gene expression).

When sirtuins remove an acetyl group (a reaction called deacetylation) from histones, they typically switch off various genes. Sirtuins can also alter the activity of other non-histone proteins.

SIRT1 in particular alters the activity of a wide variety of genes and proteins involved in: 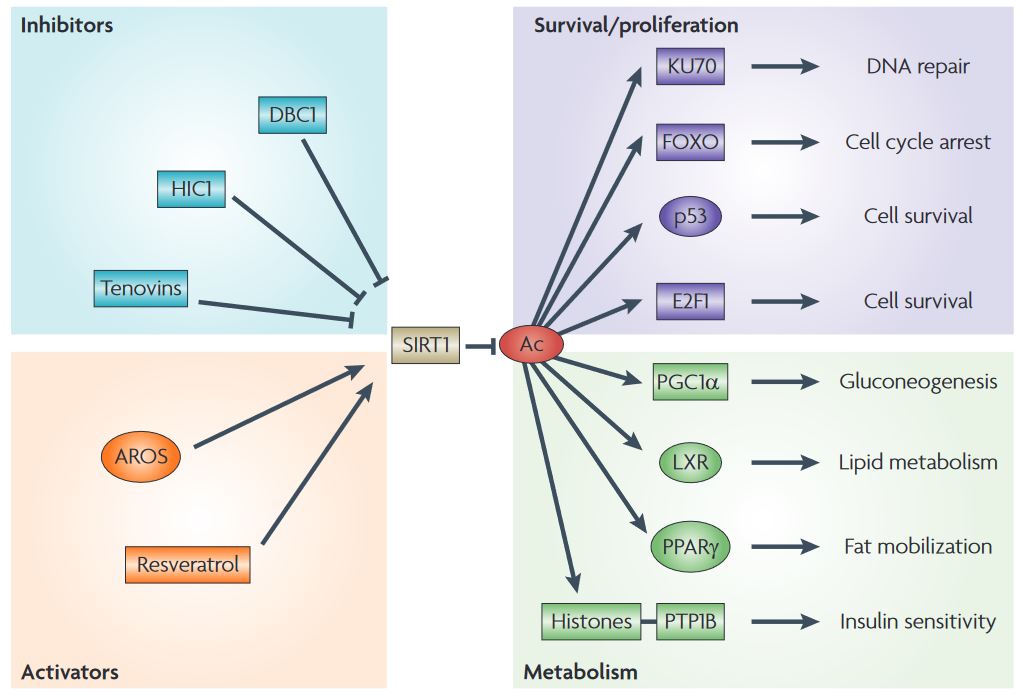 SIRT1 also plays an important role in neuroprotection – the preservation of the structure and function of nerve cells (neurons), which involves protection against neuronal damage, degeneration, and death.

By protecting neurons against damage, it is thought that SIRT1 activity contributes to healthy ageing and preservation of cognitive function in older age.

How does SIRT1 affect brain health and ageing?

The SIRT1 enzyme is highly expressed by neurons in the brain, where it is thought to play a role in:

By facilitating these processes, SIRT1 may help to slow ageing of neurons in the brain and maintain cognitive function as we get older. It should be noted that the majority of studies into SIRT1 and brain ageing have been performed in animal models rather than human subjects.

Let’s look at each of the above roles individually.

As mentioned earlier, SIRT1 affects how various genes and switched on and off. One of the genes switched off by SIRT1 is NF-κB, which activates various pro-inflammatory molecules. By turning off NF-κB, SIRT1 acts to inhibit inflammation and resultant inflammatory damage to neurons. This also helps to combat ageing and degeneration of neurons, as inflammation is thought to contribute significantly to the ageing process (a phenomenon known as inflammaging.)

SIRT1 also activates proteins involved in autophagy – the process by which damaged cell components are cleared and recycled.  By promoting autophagy, SIRT1 may help to maintain the function and prolong the survival of neurons.

Animal models of neurodegenerative disease (e.g. Alzheimer’s disease) also point towards a neuroprotective role of SIRT1. For example, genetically engineering mice to overexpress SIRT1 in various brain regions has been shown to reduce the formation of amyloid plaques (one of the hallmark lesions of Alzheimer’s disease) and slow declines in learning and memory.

Neurogenesis is the process by which new neurons are formed in the brain. SIRT1 is thought to play a role in neurogenesis both during development in utero and throughout life. 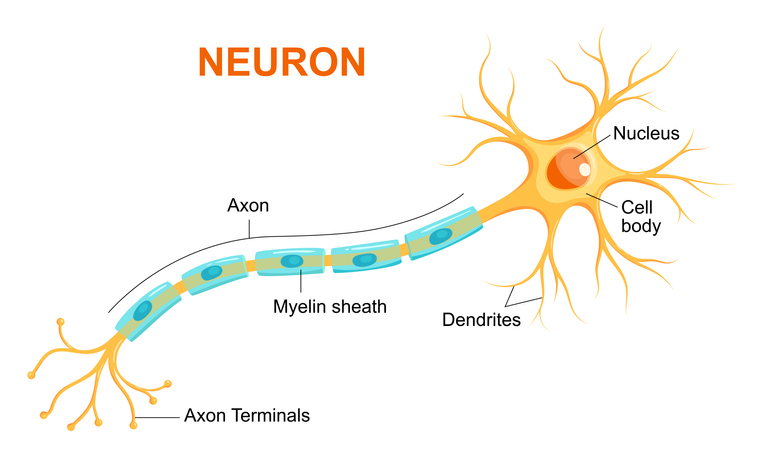 SIRT1 has also been shown to promote the growth and sprouting of neurons. This involves the elongation of part of a neuron called the axon, as well as the sprouting of new outgrowths called dendrites. These processes are important in both the development of brain areas and the regeneration of nerves.

Synaptic plasticity refers to changes in the strength of connections between neurons, which is thought to be one of the fundamental processes that underlies learning and memory.

Animal studies suggest that SIRT1 plays a key role in synaptic plasticity, learning and memory. For example, mice in which the SIRT1 gene has been knocked out have deficits in learning to associate cues with an electric shock, and also have poorer spatial and short-term memory.

In humans, SIRT1 activity in the brain decreases as we get older. Reduced SIRT1 activity and synaptic plasticity in brain areas such as the hippocampus may partly underlie declines in memory and other cognitive functions as we age.

In part of the brain called the hypothalamus, we have specialised populations of neurons that can either stimulate (AgRP-neurons) or inhibit (POMC-neurons) appetite. (You can read more about these neurons in the Leptin resistance trait article). SIRT1 has been found to curb food intake by suppressing activity of appetite-stimulating Ag-RP neurons. It also acts to increase energy expenditure and alter glucose and fat metabolism.

As we’ll explain in a later section, the beneficial effects of calorie / dietary restriction (i.e. a reduction in calorie intake without causing malnutrition) on metabolism and neuronal function may also be mediated by SIRT1 activity.

The SIRT1 enzyme is coded for by your SIRT1 gene.

Studies have found that the ‘T’ allele causes greater expression of the SIRT1 enzyme and therefore higher enzyme activity. Furthermore, the ‘T’ allele has been linked to higher SIRT1 activity in various brain regions, such as the occipital cortex at the back of the brain.

It has been proposed that higher SIRT1 activity in the brain may afford ‘T’ allele carriers greater protection against neuronal damage and age-related cognitive decline.

The ‘T’ allele (rs3758391) of the SIRT1 gene has been linked to better cognitive functioning in older age. Cognitive function is a broad term that encompasses our various mental abilities, such as memory, learning, planning, attention, and decision making.

In the Leiden 85-plus study, researchers genotyped 1245 citizens of Leiden, the Netherlands, all of whom were 85 years or older, and then assessed their cognitive function over time (on average 4.4 years) using various psychometric tests.

Subjects with two copies of the ‘T’ allele (i.e. TT genotype) had significantly higher scores on tests of immediate and delayed memory compared to those with the CT and CC genotypes.

It is possible, (although needs further research) that the higher scores of cognitive function in those with the TT genotype may reflect higher SIRT1 activity, which offers greater protection against age-related degeneration of neurons in the brain.

On this note, animal studies tentatively suggest that higher SIRT1 activity (which is also observed in human ‘T’ allele carriers) may improve cognitive function, including learning and memory. For example, enhancing SIRT1 activity has been shown to improve the spatial memory in rats.

As a caveat to the above, it is worth noting that some studies have failed to find an association of the 'T' allele of the SIRT gene with better cognitive function in older age. For example, the Concord Health and Ageing in Men Project (CHAMP) study did not find a significant relationship between SIRT1 genotype and scores on the MMSE (Mini Mental State Examination) - a brief assessment of cognitive function.

In this context, it might be expected that differences in SIRT1 activity and expression (due to variants of the SIRT1 gene) could be linked to differences in bodyweight and body composition.

One study, called the CHAMP (Concord Health and Ageing in Men Project) study, which followed Australian men aged 70 years old and over, found that the ‘T’ allele (rs3758391) of the SIRT1 gene was associated with slightly lower bodyweight and BMI, and a higher percentage of lean body mass.

While it could not be directly explored in the study, it is possible the healthier body composition in ‘T’ allele carriers may reflect the effect of higher SIRT1 activity, which has been shown to suppress food intake and increase energy expenditure.

How does calorie restriction affect SIRT1 activity and brain health?

Calorie restriction refers to consuming fewer calories per day over a prolonged period of time, but without causing malnutrition.

For example, someone undergoing a 20% calorie restriction diet may only consume 2000 kcals per day (as opposed to 2500 kcals), while still ensuring an adequate intake of important macro- and micronutrients.

As you may be already aware from its coverage in the popular press, calorie restriction is thought to bring several health benefits.

Studies in various animals (including worms, rodents, and primates) have shown that reducing daily calorie intake by between 10-40% can increase lifespan by up to 50%. In humans, calorie restriction has been shown to improve blood pressure, reduce markers of inflammation and enhance insulin sensitivity.

These health benefits of calorie restriction are thought, in part, to be due to the activity of SIRT1. Reducing calorie intake over time has been demonstrated to increase the expression and activity of SIRT1. Higher SIRT1 activity, in turn, stimulates various pathways that dampen inflammation, inhibit ageing, and promote DNA repair and cell survival. When it comes to brain health, animal models of various neurodegenerative diseases, including Huntington’s disease, Alzheimer’s disease, and Parkinson’s disease, demonstrate that calorie restriction can protect against neuronal damage.

Furthermore, calorie restriction has been found to stimulate the growth and development of new neurons (neurogenesis) and enhance the connections between neurons (synaptic plasticity). Both of these effects are likely to involve the activation of SIRT1.

These neuroprotective effects of increased SIRT1 activity may lead to improvements in cognitive following calorie restriction, although evidence from human clinical trials is mixed.

Some randomised controlled trials of calorie restriction in human subjects have shown that reducing energy intake can improve cognitive functions such as memory.

The Comprehensive Assessment of Long-term Effects of Reducing Intake of Energy (CALERIE) part II trial assigned 220 healthy volunteers to either a normal, ad libitum (AL) diet, where subjects could eat as many calories as they wanted, or a calorie restricted (CR) diet, which involved a 25% reduction in a person’s normal calorie intake.

Subjects were then followed over 24 months and had their cognitive function assessed using a battery of neuropsychological tests. One of cognitive functions assessed was spatial working memory, which involves being able to remember certain visuospatial information (e.g. the location of hidden yellow boxes) and then hold this information ‘online’ while completing tasks. As shown in the graph above, the researchers found that those following a 25% calorie restriction (CR) diet showed significantly greater improvements in spatial working memory after 24 months.

As illustrated in the graph below, those following the calorie restriction diet had significantly higher scores on verbal memory tests after 3 months. Furthermore, these improvements in memory were correlated with improvements in insulin function and inflammatory markers. Despite these positive findings, other clinical trials have found calorie restriction to have no effect (either positive or negative) on cognitive function.

It is also worth noting that maintaining high calorie deficits (e.g. 30% calorie restriction diets) over time is quite difficult and there is evidence that it may cause preoccupation with food, bodyweight and body shape in certain people. This, in turn, may negatively affect cognitive function (at least temporarily).

How do other lifestyle factors affect SIRT1 activity and brain health?

Aside from calorie restriction, other dietary factors can impact upon SIRT1 activity, brain health and cognitive function.

Studies on mice suggest that high-fat diets act to reduce the expression of SIRT1 in the hippocampus – a brain region that underlies memory. Furthermore, the reduced SIRT1 expression was linked to deficits in memory tasks.

Resveratrol, a phytonutrient found in the skin of grapes, blueberries, peanuts, pistachios and red wine, has been widely shown to activate SIRT1.

There is also some clinical trial evidence that supplementation with resveratrol can enhance cognitive function. For example, one study randomised 80 post-menopausal women to either take either 75 mg of resveratrol twice daily or a placebo over 14 weeks.

As shown in the graph below, those taking resveratrol showed significantly greater improvements in various cognitive domains, including verbal memory and overall cognitive performance.

In addition to dietary factors, exercise has also been shown in animal models to increase SIRT1 activity. It is plausible that activation of SIRT1 pathways and their effects on neurons may underlie some of the cognitive and mental health benefits of exercise.

Your SIRT1 and neuroprotection trait

Your SIRT1 and neuroprotection trait looks the rs3758391 SNP within your SIRT1 gene. Depending on your DNA results, you will be classified into one of two groups:

To find out your result, please login in Truefeed.