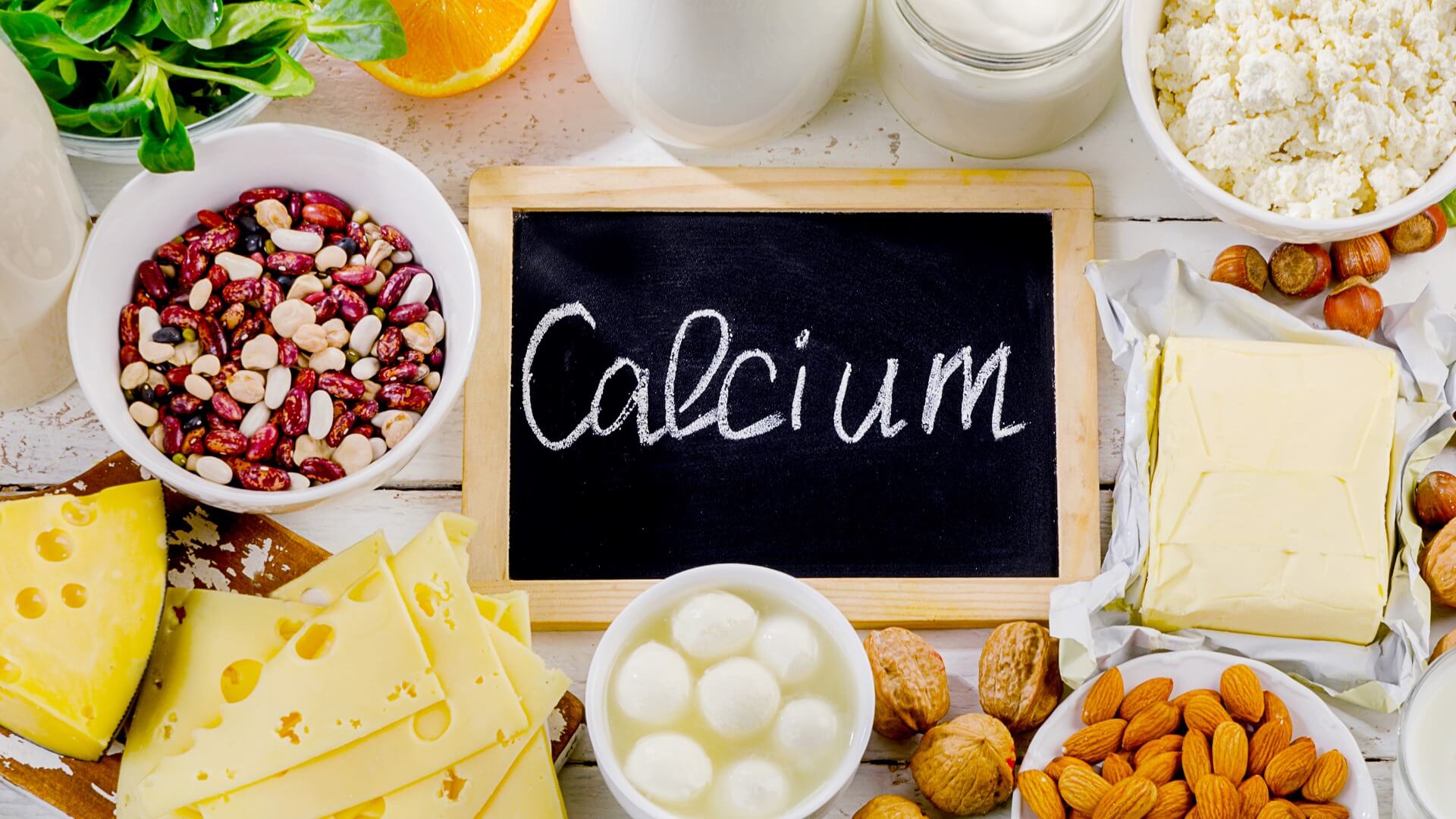 Calcium is a mineral that is essential for various roles in the body, including heart function, muscle contraction, nerve signalling and maintaining healthy bones.

Like other minerals (and vitamins), calcium is a micronutrient. This means, unlike fats, carbohydrate and protein (which are collectively termed ‘macronutrients’), we require calcium only in small quantities. Nevertheless, calcium is also considered to be a macromineral – it is needed in larger amounts compared to so-called ‘trace minerals’ such as copper and manganese.

Why is calcium important?

We often think of calcium as being particularly important for healthy bones and teeth. While this is undoubtedly true, calcium plays much broader (and often less widely known) roles in the body.

Several of the internal biochemical processes that keep cells alive are dependent on calcium. For example, calcium is often used as a second messenger to relay signals from receptors on the outside of cells to cause molecular changes deep within cells. Similarly, calcium is extremely important in cell signalling: the cascades of chemical reactions that allow cells to communicate with one another. Calcium is also an important cofactor, meaning it is required for several enzymes to function efficiently.

Many of calcium’s functions in the body stem from the fact that it forms an ion: an electrically charged atom. The movement of calcium (Ca2+) ions into and out of cells causes differences in electrical charge and voltage across cell membranes. This principle is central to heart contraction, skeletal and smooth muscle contraction, and nerve signalling.

On a related note, calcium ions regulate the activity of voltage-gated ion channels. These are special transporter proteins located on cell membranes that open and close to allow the passage of ions (charged atoms such as sodium Na+, potassium K+ and chloride Cl-) into and out of cells. As their name suggests, the opening and closing of these channels is triggered by changes in voltage across cell membranes. As calcium ions affect the voltage across cell membranes, changes in calcium levels can influence the opening and closing of voltage-gated ion channels and therefore the movement of other ions into and out of cells. This affects the function of so-called 'electrically-excitable' tissues - heart, nerve, muscle.

Where is calcium stored in the body?

Our body has three main regions where it stores calcium:

The majority of calcium is stored in bone. Of this, most is in bone mineral – as part of a crystalline compound called hydroxyapatite. A much smaller proportion of bone calcium is in a reservoir that can be rapidly released into the blood and extracellular fluid (ECF).

Extracellular fluid (ECF) is essentially a term for all body fluid that is outside of cells. This predominantly includes plasma (or serum*), the fluid component of blood, and interstitial fluid, the fluid that surrounds and baths cells.

Plasma and interstitial fluid are important as they contain ions (including calcium ions) and nutrients that cells require for various key processes.

In your blood plasma, about half of calcium is bound to proteins, particularly a protein called albumin. The remaining half is contained as free calcium ions – (this is sometimes referred to as ionized calcium).

As we will soon find out, your body strives to maintain constant levels of calcium ions in the blood plasma and interstitial fluid.

* The term serum technically refers to the blood plasma (i.e. the fluid, non-cellular component of blood) without clotting factors. To keep things simple, we will use the terms blood serum and blood plasma interchangeably.

As mentioned earlier, calcium is extremely important for many of the internal signalling processes and chemical reactions that occur within cells. Cells store calcium in various internal organelles, including the mitochondria (which are responsible for cell respiration) and the endoplasmic reticulum (involved in the packaging and transport of proteins).

The amount of calcium within cells fluctuates considerably, depending on the activity of chemical reactions and signalling processes taking place. Intracellular calcium stores are replenished from calcium in blood plasma and interstitial fluid.

Why do we need to regulate calcium levels in the blood?

More specifically, by stabilizing the voltage across cell membranes, calcium ions regulate the opening and closing of voltage-gated ion channels. When calcium levels in the blood drop, voltage-gated ion channels are more likely to open. This then causes an influx of other ions (e.g. sodium), which can cause nerve and muscle cells to become over-excitable and fire inappropriately. For example, muscle spasms can result from low levels of a calcium (a phenomenon called hypocalcaemic tetany).

Conversely, if calcium levels in the blood become excessively high, voltage-gated ion channels are more likely to remain closed. This hinders the ability of other ions to enter nerve and muscle cells, which makes it harder for nerve signals to be conducted.

Which organs regulate calcium levels in the blood?

Calcium levels in the blood are kept within a strict range by constantly adjusting the rate at which calcium is absorbed from food, excreted in the urine, and converted into bone mineral.

In this sense, there are three main organs that regulate calcium levels:

By increasing the rate of calcium absorption in the small intestine, levels of calcium in the blood serum can be raised.

By altering the amount of calcium that is reabsorbed by the kidneys, we can adjust calcium levels in the blood serum. For example, when blood calcium levels become excessively high, we reduce calcium reabsorption in the kidneys (and excrete more calcium in the urine).

Conversely, stimulating reabsorption of calcium in the kidneys will increase blood calcium levels.

The majority of calcium is stored as bone mineral. By remodelling bone, that is breaking down or depositing new bone tissue, calcium can be released into or removed from the bloodstream.

To increase serum calcium levels, bone tissue can be broken down in a process called bone resorption. Bone resorption is carried out by specialised bone cells called osteoclasts. They secrete acid which dissolves bone and releases calcium (along with phosphate) into the blood plasma and interstitial fluid.

How are serum calcium levels regulated?

As explained above, we can adjust serum calcium levels by altering three key processes:

The balance of these processes is coordinated by a system of hormones, including:

What happens when serum calcium levels fall too low?

As with other homeostatic feedback mechanisms that maintain a constant internal environment for our tissues, the first stage in calcium regulation involves monitoring and sensing changes in serum calcium levels.

When serum levels of calcium fall, less calcium binds to the CaSR. This triggers the parathyroid glands to produce more parathyroid hormone (PTH).

PTH has several effects in the body, all of which lead to increased calcium in the blood:

In the longer term, it also stimulates the production of more osteoclasts. Osteoclasts are cells responsible for bone resorption: they break down bone tissue and release calcium into the bloodstream.

PTH stimulates reabsorption of calcium in the kidneys

PTH causes tubules in the kidneys to reabsorb more calcium into the bloodstream and excrete less calcium in the urine.

Note also that less calcium binding to CaSR  in the kidneys also directly stimulates the kidneys to reabsorb more calcium.

Vitamin D, the ‘sunshine vitamin’, is obtained from our diet and also made by our skin using sunlight. This form of Vitamin D, however, is inactive. Vitamin D is subsequently converted into its active form: 1,25 dihydroxyvitamin D (or calcitriol) by the kidneys.

What happens when serum calcium levels become too high?

When calcium levels in the blood serum rise, more binds to the CaSR protein in the parathyroid glands. This suppresses the release of the PTH.

Similarly, activation of the CaSR protein in kidneys inhibits the reabsorption of calcium. This leads to a greater loss of calcium in the urine.

Your thyroid gland, a larger gland in the middle of your neck, also plays a role in regulating serum calcium levels. Again this is mediated by the CaSR protein. When levels of calcium become too high, cells in your thyroid gland called C-cells secrete a hormone called calcitonin.

It does this in two main ways: 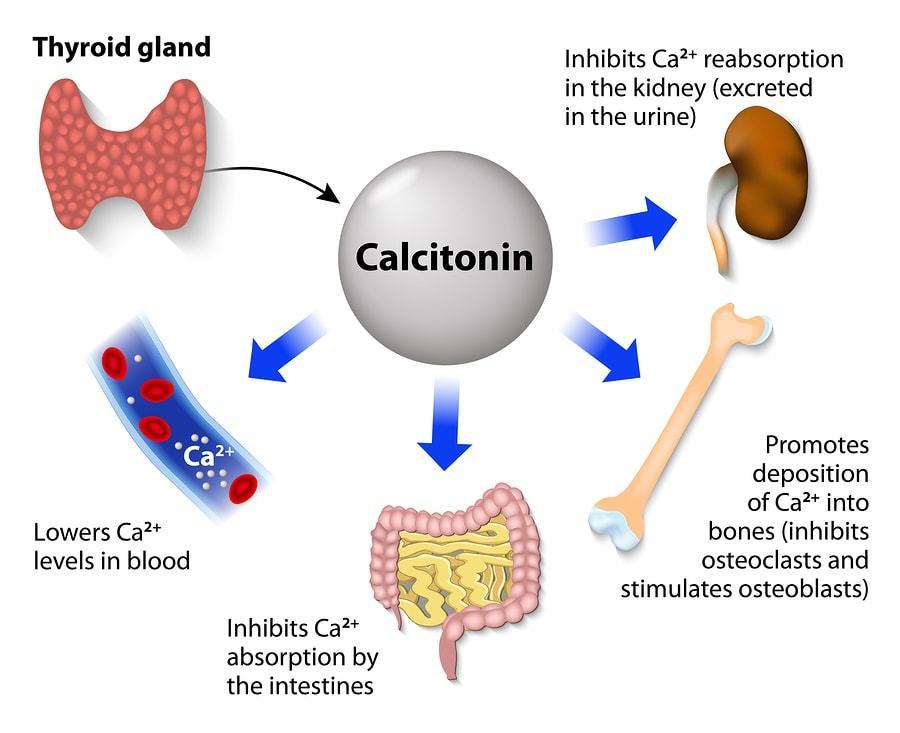 How do genes influence your serum calcium levels?

There are several genes that affect calcium metabolism and therefore influence your blood serum levels of calcium. Perhaps the most well researched is the CASR gene, which encodes the CaSR Calcium-Sensing Receptor protein.

Variants of this gene affect how well your parathyroid glands and kidneys respond to changes in serum calcium levels. They therefore partly influence your risk of low or high blood calcium levels.