The physiology of hidden muscles: Diaphragm 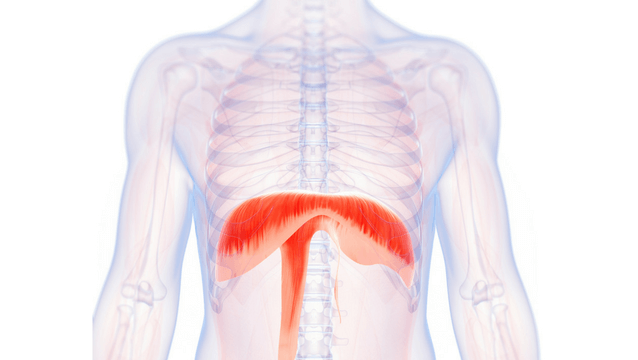 No matter how much muscle you build, there are a couple of ‘hidden’ muscles you will never get to see but they have a huge impact on your performance and health. One of them is the most important muscle for respiration and posture: the diaphragm.

You’re probably pretty familiar with the intercostal muscles (if you have ever eaten spare ribs) and abdominal muscles (the “abs”), but the most relevant muscle for respiration is less well known: the diaphragm. In a highly coordinated manner, these muscles not only make you breathe but also stabilize your posture.

The diaphragm is a 2-4mm thin, dome-shaped flat muscle and tendinous structure that separates the thoracic cavity (chest) from the abdominal (belly) cavity. It is located below the lungs and the heart and above the liver. It only allows passing for the two important blood vessels (the vena cava and the aorta) and the oesophagus.

The muscle roughly consists of two sections: the ‘parachute’ section that makes up most of the dome, and its ‘tail’ that attaches to the lower part of the spine. The diaphragm is very unique by having its muscle fibres attached to itself by a central tendon, and it is a muscle that can be both voluntarily and involuntarily controlled.

How does the diaphragm work?

Upon activation, the ‘parachute’ section of the diaphragm muscle flattens and lowers like a piston towards the abdominal cavity whereas the ‘tail’ part of the diaphragm assists this movement. As the abdomen and the lower part of the rib cage move outwards, the lungs expand whereby air is ‘pulled’ inwards and used for gas exchange. The volume of the lungs shrinks again and the air is exhaled. In this exhaling position, maximal stability is reached as the parachute of the diaphragm is optimised.

Why is it important to have proper diaphragm breathing?

We can distinguish two main forms of breathing: upper (chest) or lower (diaphragm) breathing, with the latter more favourable. Why?

First of all, correct diaphragmatic breathing helps to increase inhalation volume as it expands the lower parts of the lungs, where oxygenation is high. Even more importantly, diaphragmatic breathing is very closely related to the stabilization of the core. As the pressure in the abdomen is increased upon inhalation, the abdominal muscles and pelvis floor are assisted in stabilizing the spine, improving posture. And, finally, it improves the function of internal organs such as the intestines and improves return of blood towards the heart and drainage of lymph.

Chest breathing, in contrast, mainly expands the upper part of the lungs and is shallower, which leads to high tension on the accessory muscles (neck, chest and back) and can cause lower back pain.

How can you see whether you use your diaphragm correctly?

You have a well-synchronised activity between the diaphragm, pelvic floor and the entire abdominal wall during breathing if:

You’re doing it wrong when:

How to improve diaphragm muscle function

If the diaphragm is not properly contracted during inhalation, stabilisation of the core will not reach to the lower part of the spine, which is key for correct performance of movements.

Two examples of exercises to be done at home are:

The Dead Bug (a good exercise to optimise diaphragm function together with abdominal co-contraction):

All FitnessGenes Training Plans and Systems come with free Abs & Core Bonus Plans that can be done at home or in the gym, and are easy to fit into your schedule. Tailored for each experience level (beginner, intermediate or advanced), the plans improve core strength and breathing patterns.