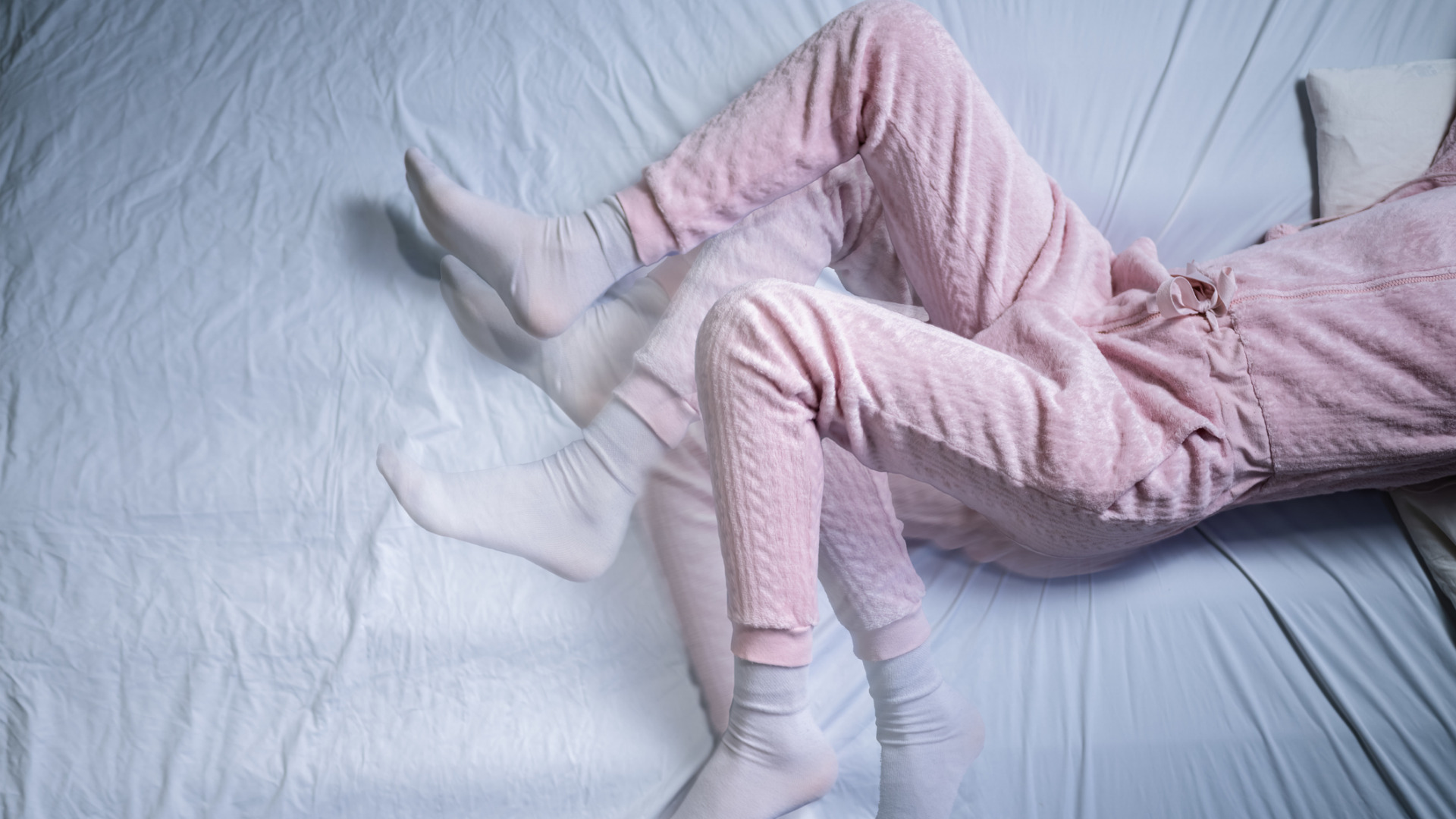 What are periodic limb movements of sleep (PLMS)?

Periodic limb movements of sleep (PLMS) are episodes of uncontrolled, repetitive movements of limbs during sleep.

The video below shows an individual with repetitive dorsiflexion of the right ankle and big toe, occurring at 14 seconds, 1 minute 2 seconds, 1 inute 23 seconds, and 1 minute 57 seconds. PLMS typically last 0.5 - 10 seconds each and occur at regular intervals of anywhere between 5 and 90 seconds. For many people, PLMS happen every 20-40 seconds.

One of the characteristic features of PLMS is that they occur during light, non-REM (non rapid eye movement sleep). As you may already know, when we sleep, we cycle through two different phases: NREM and REM sleep.

NREM sleep can be further divided into three stages: N1, N2, and N3, which signify progressively deeper sleep. N1, which lasts 1 - 5 minutes, is when we’re feeling drowsy and dozing off. N2 is a deeper stage of sleep, lasting 10-25 minutes in the first sleep cycle, but getting progressively longer with each cycle.  N3 (also known as deep or slow-wave sleep) is the deepest stage of sleep, which is longer during the first half of sleep.

The graph below shows a typical overnight sleep pattern, moving from wakefulness (W) through 6 cycles of sleep involving NREM (NR1 - NR3) and REM (R) stages of sleep, before awaking at 0600.

PLMS most commonly occur in N1 and N2 stages of NREM sleep, and in the first half of the night. The repetitive movements can often wake people up or otherwise disrupt sleep without causing waking (in fact, many people may be unaware of PLMS). Consequently, people experiencing PLMS may feel excessively sleepy the following morning (known as daytime somnolence) and often report feeling unrefreshed following sleep.

While normal, healthy individuals can have PLMS, they are uncommon in people under 40 years old. Older people are more likely to have PLMS, with the risk increasing with advancing age. Clinicians may diagnose a person with periodic limb movement disorder (PLMD) when PLMS episodes can occur sufficiently frequently (greater than 15 episodes an hour) and cause significant disruption to sleep.

The exact cause of PLMS is unclear, but some research suggests that these movements may result from a reduction in dopaminergic activity in brain and spinal circuits involved in motor control.

According to the ICD-11 (International Classification of Diseases, 11th Revision), which is a list of criteria that clinicians use to diagnose various diseases, periodic limb movement disorder (PLMD) involves:

A formal diagnosis  of PLMD can be made using polysomnography - patients are invited into a sleep laboratory where their brain activity, eye movements, breathing, heart rhythm and muscle movements are monitored overnight.

What is restless legs syndrome (RLS)?

Restless legs syndrome (RLS) is a condition characterised by an overwhelming urge to move the limbs (usually legs).

People with this condition often report an uncomfortable crawling, tingling, or creeping sensation in their feet, calves and thighs, which is typically worse during the evening or at night. Moving the legs may temporarily relieve this unpleasant sensation.

What is the link between PLMS and RLS?

The vast majority (about 80- 90%) of people with restless legs syndrome (RLS) also experience periodic limb movements of sleep (PLMS). PLMS, however, can occur without RLS and not everybody with excessive PLMS has the uncontrollable urge to move their legs that is characteristic of RLS. Another distinguishing feature is that PLMS occur during sleep, whereas RLS symptoms occur when someone is awake.

As with PLMS, RLS is thought to arise from reduced dopaminergic activity in brain circuits that control movement and coordination.

What is the BTBD9 gene?

BTBD9 (BTB domain containing 9) is a gene whose exact function is unclear, although it likely plays some role in brain and nerve function.

More specifically, animal models suggest that BTBD9 is involved in dopaminergic signalling and the control of movement (motor coordination). For example, "knocking out" or deleting the BTBD9 gene in mice causes them to become more restless and have disrupted sleep.  Similar gene knockout studies also suggest that the BTB9 gene plays a role in synaptic plasticity - the changes in strength of connections between neurons that occur in response to experience.

How do BTBD9 gene variants affect the risk of PLMS?

A Single Nucleotide Polymorphism (SNP), designated rs3923809, causes an A → G change in the DNA code of the BTBD9 gene. This therefore gives rise to two different BTBD9 gene variants or “alleles”:

One 2014 study analysed the BTBD9 genotypes and sleep data of 1090 subjects who were part of the Wisconsin Sleep Cohort (WSC) between 2000 and 2012. The WSC is an ongoing study, first set up in 1988, that tracks the sleep patterns of adults in south central Wisconsin and aims to find out more about the causes of sleep disorders.

In the 2014 study, researchers looked at the relationship between BTBD9 genotype and number of PLMS episodes. A PLMS episode was defined as having a sequence of 4 or more leg movements (each leg movement lasting 0.5-10 seconds), with the sequences occurring at 5-90 second intervals.

After adjusting for age, RLS symptoms and other variables, the researchers found that carrying a copy of the ‘A’ variant was associated with an additional 2.5 PLMS episodes per night. (This can be seen in the beta-coefficient in right column of the table below).

People with two copies of the ‘A’ variant (i.e. those with the AA genotype) were therefore predicted to have an additional 5 PLMS episodes per night. Another study looked at people enrolled in the Hyponaus Sleep Cohort Study based in Lausanne, Switzerland, and compared the genotypes of those with greater than 15 PLMS episodes per hour to those with 15 or less PLMS episodes per hour. As explained earlier, this cut-off was used because it is in line with the diagnostic criteria for periodic limb movement disorder (PLMD).

Compared to those with no copies (i.e. GG genotype), people with one or two copies of the ‘A’ variant (i.e. AG and AA genotypes, respectively) were found to be 1.99 times and 3.52 times, respectively, more likely to have greater than 15 PLMS episodes per hour.

How do BTBD9 variants affect the risk of restless legs syndrome (RLS)?

The ‘A’ variant (rs3923809) of the BTBD9 gene has also been linked to a greater risk of restless legs syndrome (RLS).

One study analysed the BTBD9 genotypes of 649 people with RLS (cases) from the Czech Repbulic, Austria and Finland. They then compared these to the genotypes of 1230 healthy controls who did not suffer from RLS. If the ‘A’ variant was linked to RLS, we would expect a greater proportion of RLS patients to carry this variant compared to healthy controls. Framed differently, we could say that, relative to not carrying the ‘A’ variant, carrying the variant is associated with a greater odds of having RLS versus being a healthy control.

This is exactly what the study found, with the ‘A’ variant being linked to a 1.58 times greater odds of having RLS compared to those with the GG genotype.

Another study using the same case-control methodology in Korean subjects found that the ‘A’ variant was associated with a 1.31 times greater odds of having RLS.

It is important to interpret these figures with caution, however. As these are population-based studies that merely look at differences in the frequencies of BTBD9 genotypes and do not factor in several other genes, the incidence of RLS , they do not shed much light on your personal risk of developing RLS.

Why might BTBD9 variants affect risk of PLMS and RLS?

We do not currently have a good understanding of the underlying mechanisms by which BTBD9 variants are linked to risk of periodic limb movements of sleep (PLMS) and restless legs syndrome (RLS).

As explained earlier, PLMS and RLS are thought to be, in part, due to impaired dopaminergic activity in brain and spinal cord circuits that control movement. On this note, drugs that enhance dopamine activity are sometimes used in the treatment of PLMS and RLS.

As animal studies suggest the BTBD9 gene plays a role in dopaminergic signalling, it is possible that the ‘A’ variant (rs3923809) of this gene somehow impairs dopamine activity, leading to an increased risk of PLMS and RLS. Of course this is purely hypothetical and speculative, with further research needed into the role of the BTBD9 gene. It is also possible that the 'A' variant is simply a genetic marker of another genetic or biological factor that confers risk to PLMS and RLS.

What other factors contribute to PLMS and RLS?

PLMS and RLS has also been linked to the following health conditions:

Increasing age is also a risk factor for PLMS and RLS, with people aged over 70 having a greater risk.