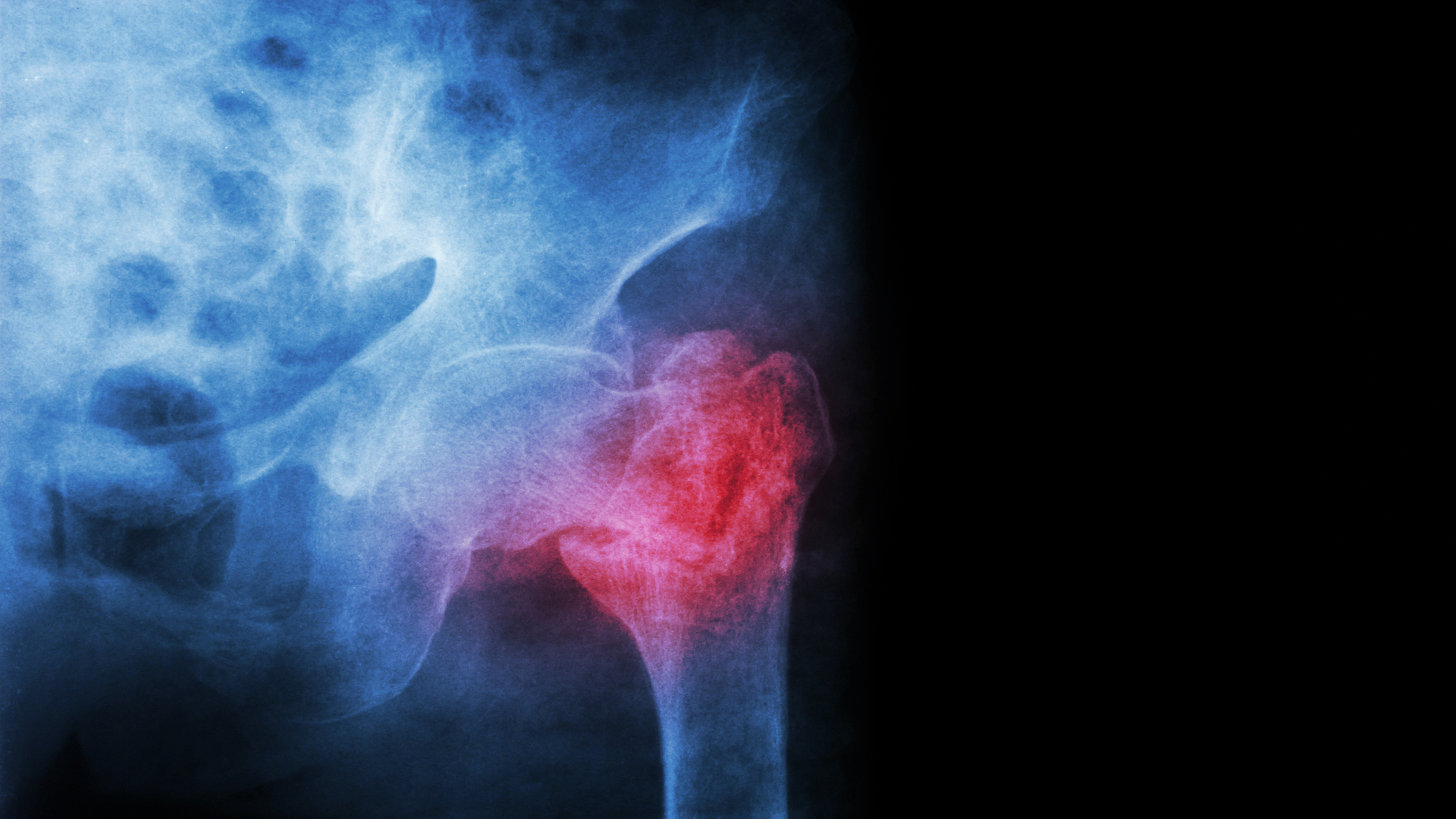 What is bone mineralisation?

Bone mineralisation is the process by which new bone material is laid down.

Our bones are predominantly made up of matrix (or osteoid): a framework of collagen which is then strengthened and hardened with calcium phosphate mineral (also called hydroxyapatite).

Rather than being static tissues, our bones are constantly remodelled over our lifetime. Old or damaged bone material is destroyed in a process called bone resorption, whereby calcium phosphate mineral in bone matrix is broken down by cells called osteoclasts, releasing calcium and phosphate into the bloodstream. Bone resorption can be likened to “scooping out” and dissolving bits of bone (it actually leaves little cavities in the bone matrix known as Howship lacunae).

What is bone mineral density?

Bone mineral density (BMD) is simply a measure of how much calcium phosphate mineral is present in a given volume of bone tissue.

Stronger bones have more mineral (and, consequently, higher bone mass) per given volume of bone tissue, meaning they have a higher bone mineral density. We can think of high bone mineral density as connoting bones that are built of a tightly packed scaffolding. This makes them strong, better able to withstand external forces, and therefore more resistant to fracture. By contrast, low bone mineral density is a marker of less bone mineral (and bone mass) per given volume of bone.

We can think of this as having bones with a much looser scaffolding, with larger gaps in between, similar to a sponge. For example, the image above shows what bones look like in conditions where bone mineral density is moderately and significantly reduced (osteopenia and osteoporosis, respectively). Low bone mineral density makes bones more fragile, less resistant to external forces, and therefore more prone to fracture.

Conversely, exposing bones to habitual loads, such as from weight-bearing exercise, stimulates bone mineralisation and can lead to an increase in bone mineral density.

How does bone mineral density change as we age?

Our bone mineral density changes throughout our lifetime. Given the loss of bone mineral density in older age, older individuals are at greater risk of osteoporosis - a condition characterised by fragile bones that are much more susceptible to fracture. We’ll explain osteoporosis in greater detail in the next section.

Changes in bone mineral density as we age are also influenced by genetic and lifestyle factors, such as diet and exercise. For example, a diet low in calcium can accelerate bone loss, as bone resorption and breakdown of calcium phosphate bone mineral is increased in an effort to raise blood calcium levels. On the other hand, regular physical activity (particularly weight bearing exercises and resistance training) can increase bone mineral density or slow the loss of bone mass in older age.

Osteoporosis is a condition characterised by low bone mineral density and fragile bones that are more susceptible to fracture.

It is sometimes referred to as a “silent disease” as osteoporosis often only becomes apparent after someone has sustained a fracture, typically of the vertebrae, hip, or wrist.

You can read more about osteoporosis and osteopenia, including how they’re diagnosed and treated, on the NHS website.

As discussed in greater detail in the Vitamin D levels (GC) trait article, vitamin D made by our body from sunlight and obtained from our diet is not biologically active. To have effects in the body, vitamin D must be converted into its active form, 1,25 dihydroxy-vitamin D (also known as calcitriol). This conversion process is done in two stages, by the liver and kidneys. The active form of vitamin D, 1,25 dihyxdroxy-vitamin D (or 1,25(OH)2D), exerts its effects on bone metabolism by binding to a specialised receptor, aptly called the vitamin D receptor (VDR).

When active vitamin D binds to the vitamin D receptor in cells of the small intestine, it enhances the absorption of calcium into the bloodstream. This calcium can then be stored as calcium phosphate mineral in bone matrix. What is the VDR gene?

The vitamin D receptor (VDR) protein is encoded by your VDR gene.

There are several different variants of the VDR created by different SNPs (single nucleotide polymorphisms). Four of the most widely studied SNPs in the VDR gene are:

Of these, the ApaI, BsmI, and TaqI polymorphisms are located within the same region of the VDR gene, and certain combinations of their corresponding gene variants may be co-inherited as a group (known as haplotypes).

Your Bone mineral density (VDR) trait focusses specifically on the BsmI (rs1544410) polymorphism, which gives rise to two different VDR gene variants or alleles: ‘b’ and ‘B’. As we’ll explain the following sections, some studies have linked the ‘B’ variant to lower bone mineral density and an increased risk of osteoporosis and osteoporotic fracture.

Studies have linked the BsmI ‘B’ variant of the VDR gene to lower bone mineral density in both men and (predominantly post-menopausal) women.

For example, regarding men, a 2022 meta-analysis of 14 studies found that those with the BB genotype (i.e. two copies of the ‘B’ variant) had lower whole body bone mineral density compared to those with the Bb and bb genotypes.

A 2009 meta-analysis also found that post-menopausal women with the BB genotype had a slightly lower spine bone mineral density than those with the Bb and bb genotypes. This is illustrated in the Forest plot below. More specifically, post-menopausal women were estimated to have a 0.022g/cm^3 lower bone mineral density of the spine, equivalent to about a 2.4% decrease. The researchers calculated that this was roughly equivalent to 1 additional year of bone-ageing.

The same 2009 meta-analysis also looked at changes in spinal bone mineral density over time. Post-menopausal women with the BB and Bb genotypes were found to lose 0.43% bone mass per year compared to those with the bb genotype.

How do VDR gene variants affect risk of osteoporosis?

As well as being associated with lower bone mineral density, the BsmI ‘B’ variant of the VDR has also been linked to an increased risk of osteoporosis. Most studies reporting this relationship have focussed on post-menopausal women, with the association less well-studied in men.

With respect to post-menopausal women, a 2020 meta-analysis pooled the data from 42 studies, encompassing 4485 women with osteoporosis (cases) and 5490 women without osteoporosis (controls).

The researchers then compared the frequency of BsmI VDR genotypes between cases and controls. They found that, in post-menopausal Caucasian women only, those carrying the ‘B’ variant (i.e. BB and Bb genotypes) had a 1.36 times higher odds of having osteoporosis.

As described earlier, a 2022 meta-analysis reported lower bone mineral density in men with the BB genotype of the VDR gene. This may also translate to an increased osteoporosis risk, although there are currently a lack of studies supporting this. One small study of white British males found that the BsmI ‘B’ variant was not individually linked to osteoporosis, but may increase osteoporotic risk when co-inherited with the ‘A’  ApaI and ‘T’ TaqI variants of the VDR gene (known as the BAT haplotype).

How do VDR gene variants affect risk of bone fractures?

Low bone mineral density makes bones less resistant to external forces and therefore more fragile and susceptible to fracture. In this respect, people with osteoporosis are much more likely to sustain fractures of their vertebrae (spine), wrist, and hip (including the neck of femur). The MRI image below, for example, shows a vertebral compression fracture, which is commonly seen in osteoporosis. A more recent meta-analysis that more robustly controlled for varying study quality, however, did not report an association between BsmI VDR genotype and risk of osteoporotic fracture.

The mechanism by which the BsmI ‘B’ variant of the VDR gene affects the function of the vitamin D receptor and bone mineralisation is not well understood.

It is thought that the ‘B’ variant increases production of the vitamin D receptor, although how this leads to lower bone mineral density is unclear. A few studies observed that women with the BB genotype had relatively lower intestinal calcium absorption (compared to those with the bb genotype) when calcium intake is low (< 300 mg per day).

It is therefore possible that carriers of the ‘B’ variant are more susceptible to low blood calcium levels, which, in turn, encourages bone resorption to release calcium into the bloodstream. Over time, this would lead to lower bone mineral density and an increased osteoporotic risk in older age (particularly as calcium absorption declines as we age).