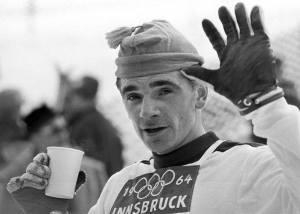 At the 1964 Winter Olympics in Innsbruck, Finnish sportsman Eero Mäntyranta won two gold medals in cross-country skiing. Though his training program wasn't radically different from those of his teammates and rivals, Mäntyranta had a distinct advantage: he was born with a genetic mutation that loaded his blood with 25–50% more red blood cells than the average man's. Since these cells shuttle oxygen from the lungs to the body tissues, Mäntyranta's muscles got more of the oxygen they needed for aerobic exercise, so he could ski faster for longer.

Mäntyranta got his extra red blood cells because of a mutation in the gene that produces the receptor for the hormone erythropoietin (epo). The kidneys normally churn out epo when oxygen levels in the body's tissues drop, as they do at high altitude, where the air is thin. Epo commands the body to manufacture new red cells, which raises the blood's capacity to carry oxygen. Once oxygen regains its normal level in the blood, the epo receptor should shut down epo production. But Mäntyranta's mutation turned off this crucial feedback, so his body kept making more red cells.

Genetics and sport is such a fascinating area, and one which is going to get bigger and bigger. Check out David's article where he actually goes and meets up with Eero, who is now 75-years-old:

To read the full article in National Geographic follow this link