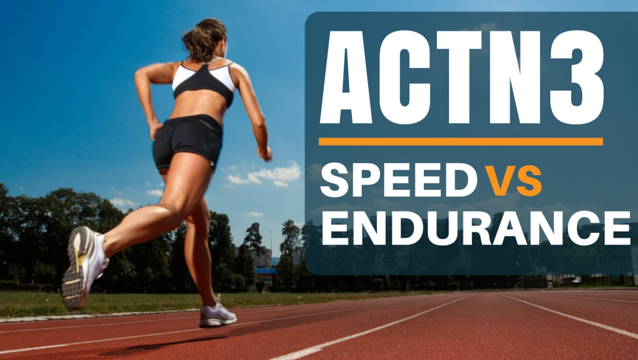 The Role Of ACTN3

On the 14th August, the 8 fastest men in the world will line up alongside one another in a bid to win the 100m Gold at the Rio Olympics.

As well as the years of relentless training, meticulous preparation and a burning desire to win, you can almost guarantee they have something else in common: all of them produce functional α-actinin-3.

α-actinin-3 is a protein encoded by the ACTN3 gene. The production of this protein has been linked to greater baseline strength, protection against muscle damage and a higher proportion of fast twitch muscle fibres. As a result, high levels of α-actinin-3 are seen to benefit the fast, forceful muscle contractions necessary in speed or power-based activity, such as sprinting.

However, not all variations of the ACTN3 gene produce the same levels of functional α-actinin-3, and one variation produces non at all.

There are three variations of the ACTN3 gene: RR, RX and XX.

Extensive research into these variations has found that carriers of the R allele (RR or RX) are able to produce the functional α-actinin-3 that is necessary for increased power performance. However, as RX only has one copy of the R allele, carriers possibly produce lower levels than those who carry two.

As a result of producing functional α-actinin-3, the RR and RX variations have been strongly linked to elite sporting performance, especially in events that require a significant amount of speed or power. In fact, every Olympic sprinter ever tested has carried at least one copy of the R allele.

On the other hand, carriers of the XX variation produce no functional α-actinin-3 at all. Lacking this protein does not have any harmful health effects, but does seem to impact sporting performance. Carriers are likely to have lower baseline strength, be more vulnerable to muscle damage, and suffer more from delayed onset muscle soreness (DOMS).

However, as with most things, there does appear to be a trade off. Studies have shown that whilst the XX variation puts carriers at a disadvantage in speed or power based activity, it may benefit them in endurance events. Research suggests that the X allele results in reduced fatigue and a higher proportion of slow twitch muscle fibres, which are traits associated with elite endurance athletes.

ACTN3 is one of the key training genes that we take into consideration when constructing your personalised Action Blueprint and any additional training plans that you choose to follow.

It’s impact on muscle recovery and repair influences how frequently you should train to maximise your results, as well as your recommended recovery time between sets.

Our in-house training team combine your individual gene results, personalised recommendations and overall goal when they create your genetically tailored training and nutrition plan. Have you decided which plan you’re going to follow? If not, you'll find these guidelines very helpful