What is Vitamin K?

Vitamin K is a fat-soluble vitamin involved in blood clotting, maintenance of bone health, and various metabolic reactions in the body.

What are the different forms of Vitamin K?

Rather than being one specific molecule, the term ‘Vitamin K’ refers to a family of closely-related molecules. There are therefore different forms (or ‘vitamers’) of Vitamin K, with the two main naturally-occurring forms being:

There are several different molecules, called menaquinones, which fall under the banner of Vitamin K2. These are denoted MK-4 to MK-13.

Bacteria in our intestines mainly produce MK-10 and MK-11. MK-4 can be produced by the body from phylloquinone, without the need for gut bacteria. MK-4 also found in small quantities in meat, dairy, and eggs. Natto, a Japanese food made from fermented soybeans, is rich in MK-7. 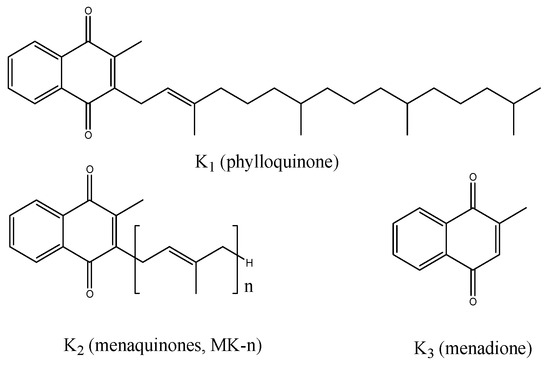 Why is Vitamin K important?

Vitamin K is an important cofactor. Cofactors are molecules that help enzymes to effectively carry out chemical reactions in the body.

How is Vitamin K involved in blood clotting (coagulation)?

If you were to cut yourself shaving, you may initially start bleeding. After a while, however, the bleeding will hopefully stop. Why is this?

After you cut/injure a blood vessel, platelets in your bloodstream quickly come and plug the injury site. Next, proteins circulating in your bloodstream called clotting factors activate each other in a complex cascade (called the coagulation cascade), ultimately leading to the production of a tough, fibrous protein known as fibrin. So, how does Vitamin K fit in? 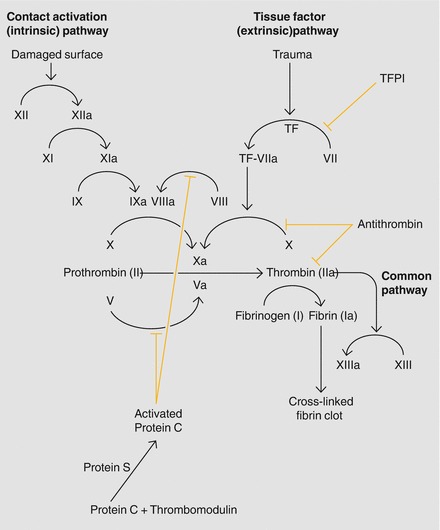 Highlighting the importance of Vitamin K in blood clotting, people with low levels of Vitamin K have blood that takes a longer time to clot. This is reflected in a longer prothrombin time – a test used by clinicians that measures how long it takes blood to clot. More severe cases of Vitamin K deficiency can lead to excessive bleeding and haemorrhage.

Similarly, drugs that oppose the function of Vitamin K, such as warfarin, can be used to inhibit the activation of clotting factors to help prevent the formation of blood clots (or ‘thin the blood’).

How is Vitamin K involved in bone health?

Several bone-related proteins are also Vitamin K-dependent proteins that must be activated using Vitamin K. One of these proteins is osteocalcin.

Osteocalcin binds calcium and helps to deposit it within bone – a process known as bone mineralisation. This helps to strengthen bones and makes them less susceptible to fracture.

Given the role of Vitamin K in strengthening and maintaining healthy bones, it is thought that supplementing with Vitamin K could reduce the risk of osteoporosis. Osteoporosis is a condition characterised by a loss of bone mineral density, which makes bones fragile and more susceptible to fracture.

A 2006 meta-analysis of 7 trials, largely involving Japanese post-menopausal women, found that supplementation with 45 mg/day of MK-4 (a form of Vitamin K2) was associated with a significantly reduced risk of hip and spine fractures.

By contrast, a more recent 2019 meta-analysis of 36 studies concluded that “for post-menopausal or osteoporotic patients, there is no evidence that vitamin K affects bone mineral density or vertebral fractures.”

The same 2019 meta-analysis found that Vitamin K supplementation was associated with a 24% lower risk of non-vertebral fractures, but the authors commented that more evidence is needed before we can conclude that Vitamin K prevents fractures.

How is Vitamin K absorbed and metabolised?

As it a fat-soluble vitamin, Vitamin K must be absorbed along with fat in the intestines. Vitamin K is then packaged with fat into lipoprotein particles and transported in the bloodstream to the liver and other tissues.

Vitamin K from our diet is in a form (known as its quinone form) that is inactive. In order to act as an enzyme cofactor and activate various Vitamin K-dependent proteins (such as clotting factors and bone proteins), dietary Vitamin K must be converted into its active form (known as its hydroquinone form). This process occurs in a series of chemical reactions known as the Vitamin K cycle.

The Vitamin K cycle also allows us to recycle and reuse active Vitamin K. This is useful as tissues have a limited ability to store Vitamin K. There are three main stages of the Vitamin K cycle:

1) Inactive dietary Vitamin K (quinone) is converted into active Vitamin K (hydroquinone). This reaction is carried out by an enzyme known as VKOR (Vitamin K oxidoreductase) as well as by other reductase enzymes.

3) Vitamin K epoxide is recycled back into inactive Vitamin K (quinone). This reaction is carried out by the VKOR enzyme. Vitamin K quinone can then re-enter stage 1 and be converted into active Vitamin K hydroquinone.

Some anticoagulant drugs, such as warfarin, act by inhibiting stages 1) and 3) of the Vitamin K cycle. This prevents active Vitamin K hydroquinone from being used to activate blood clotting factors.

What is warfarin and how does it work?

Warfarin is an anticoagulant or ‘blood thinning’ drug that makes blood less likely to clot. This prevents both the formation of new blood clots and the enlargement of existing blood clots.

It is used in the treatment of people with:

How does warfarin work?

Warfarin belongs to a class of drugs known as Vitamin K antagonists. It works by preventing the body from using Vitamin K to make clotting factors.

Warfarin works by inhibiting the activation of Vitamin K-dependent clotting factors (II [Prothrombin] VII, IX, and X) thereby preventing blood clot formation. This is illustrated in the diagram below. 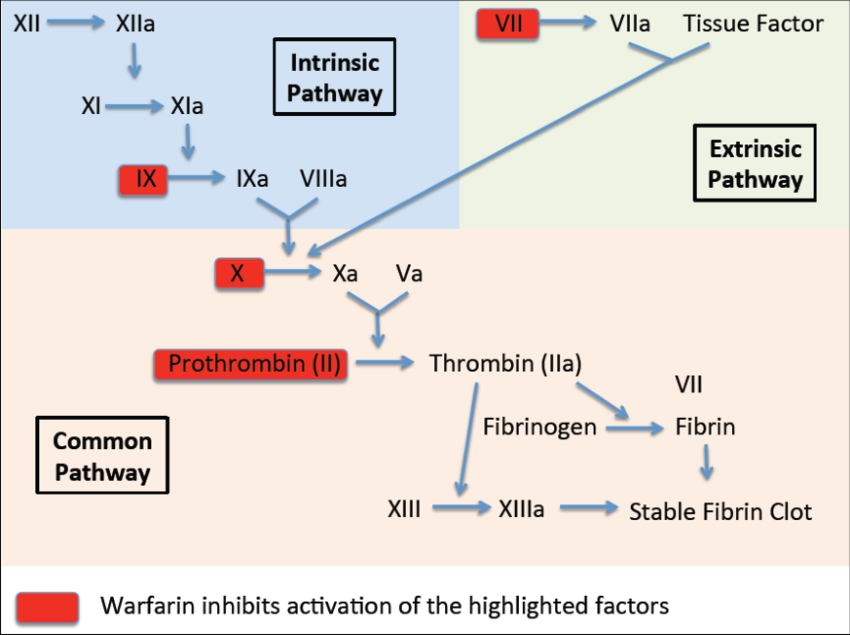 In terms of Vitamin K metabolism, warfarin inhibits key stages in the Vitamin K cycle that allow the conversion of inactive Vitamin K into its active form.

Warfarin also inhibits the recycling of Vitamin K epoxide back into Vitamin K quinone to be reused. Given that it blocks the usage of Vitamin K, the amount of Vitamin K in your diet can significantly affect the efficacy of warfarin. For this reason, people using warfarin are advised to keep their diet stable and avoid sudden changes in intake of Vitamin K-rich foods.

As well as being recycled in the Vitamin K cycle (described previously), Vitamin K can also be inactivated and removed by the liver.

This is carried out by your CYP4F2 enzyme. (Incidentally, this is the same enzyme that breaks down Vitamin E, which we encountered before in your Vitamin E Breakdown trait.) 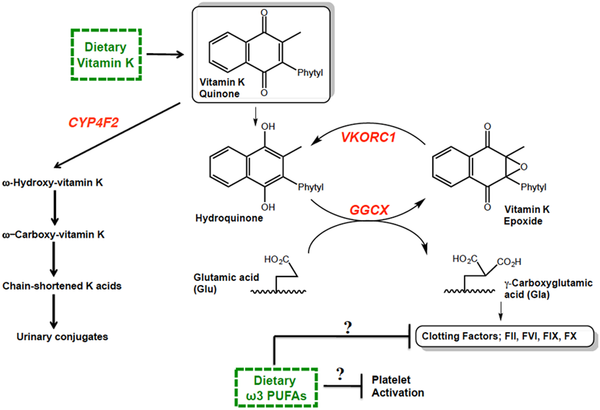 Your CYP4F2 enzyme acts to remove Vitamin K quinone from the Vitamin K cycle, thereby inactivating it. It can then be further broken down and excreted in urine.

By removing and breaking down Vitamin K, your CYP4F2 acts to ‘siphon off’ and prevent excessive Vitamin K accumulation in the liver.

Your CYP4F2 enzyme is coded for by your CYP4F2 gene.

Due to reduced Vitamin K breakdown, people with the ‘T’ allele of the CYP4F2 gene have higher tissue and blood levels of Vitamin K.

On this note, a study of 217 Japanese patients found that those with the TT genotype (i.e. those carrying two copies of the ‘T’ allele) had significantly higher plasma levels of Vitamin K1 and MK-4 (a form of Vitamin K2) compared to those with the CT and CC genotypes.

Several studies suggest that the ‘T’ allele of the CYP4F2 gene is associated with the need for a higher warfarin dose.

For example, a systematic review of 30 studies, encompassing 9,740 subjects, found that, compared to those with the CC genotype, people with the ‘T’ allele required an 8.3% higher dose of warfarin in the initial phases of treatment.

The need for a higher warfarin dose likely results from increased Vitamin K levels in people with the ‘T’ allele. As described earlier, warfarin works by preventing the liver from using Vitamin K to make blood clotting factors. Higher tissue levels of Vitamin K would therefore necessitate higher dosages of warfarin to overcome this.

Again, this effect may be due to higher levels of Vitamin K in ‘T’ allele carriers, which is used to make and activate blood clotting factors.