Your Vitamin B6 Level Trait

What is Vitamin B6?

Vitamin B6 is a water-soluble vitamin that plays a role in many different metabolic reactions in the body. It is an essential micronutrient, meaning that it must be obtained from our diet as we cannot produce Vitamin B6 ourselves.

There are six different forms of Vitamin B6 (with the term ‘Vitamin B6’ used to refer these forms collectively): Of these six forms, pyridoxal 5’-phosphate (PLP) and pyridoxamine 5’-phosphate (PMP) are the active forms and they take part in several important metabolic reactions in the body.

We make PLP and PMP from other the forms of Vitamin B6 in our diet (e.g. pyridoxine).

Why is Vitamin B6 important in the body?

The active forms of Vitamin B6, namely PLP and PMP, are important molecules because they act as coenzymes. Coenzymes are molecules that bind to enzymes, allowing them to bind substrates and catalyse chemical reactions.

PLP is a particularly important coenzyme, assisting over 100 different enzymes and playing a role in over 4% of all enzymatic reactions in the body. In turn, these PLP-dependent reactions are involved in producing key molecules, including neurotransmitters (serotonin and dopamine), haemoglobin, DNA, and RNA.

PLP is also involved in various immune functions, as well as the regulation of levels of homocysteine – an amino acid linked to cardiovascular disease.

Neurotransmitters are nerve-signalling molecules that convey messages from one nerve to another. Vitamin B6 (PLP) is used to produce two key neurotransmitters in the brain and nervous system: serotonin and dopamine.

More specifically, PLP acts as a coenzyme for an enzyme called aromatic L-amino acid decarboxylase (AADC), which converts L-DOPA and 5-HTP into dopamine and serotonin, respectively. Haemoglobin is the iron-containing protein found in red blood cells that carries oxygen around the body.

Vitamin B6 (PLP) acts as a coenzyme for 5-aminolevulinic acid synthase, an enzyme involved in the production of heme: one of the major components of haemoglobin molecules, which binds to oxygen. 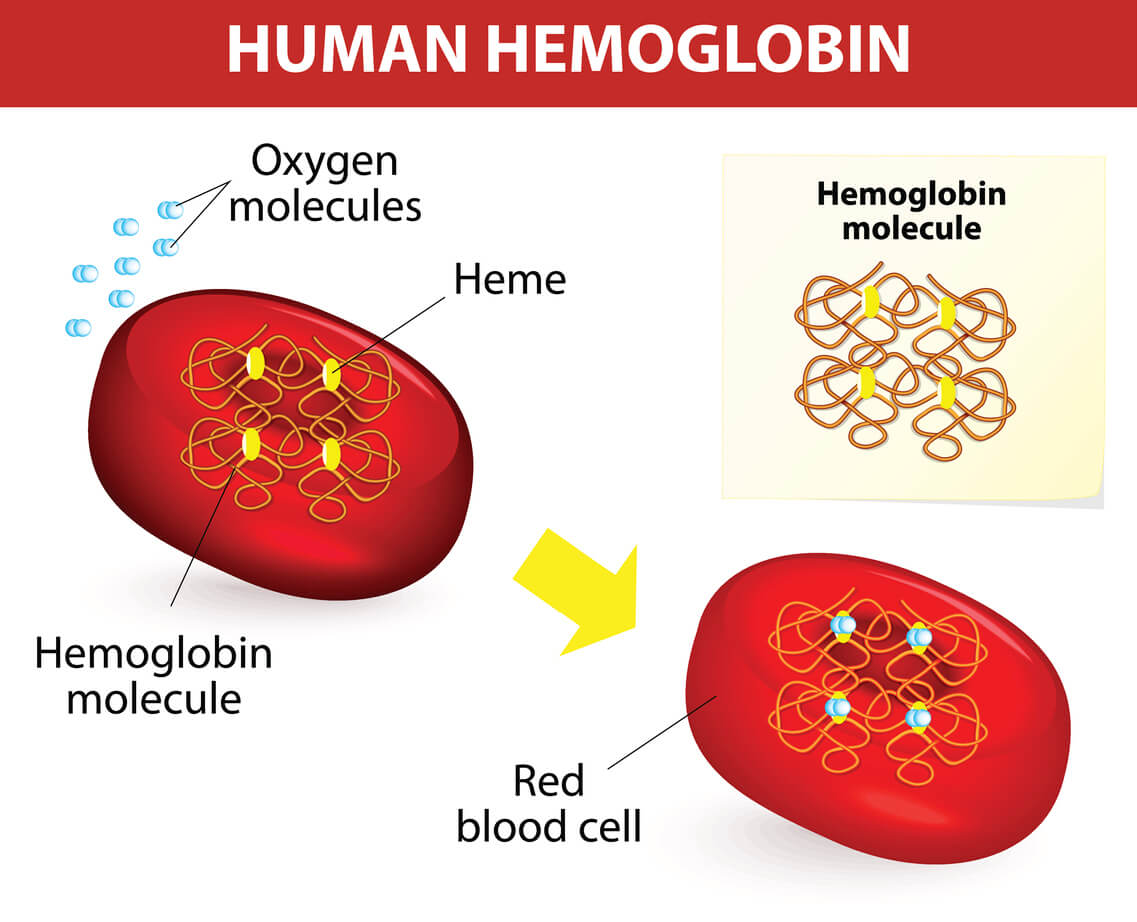 DNA and RNA, which are collectively known as nucleic acids, are molecules that contain instructions for building proteins.

PLP is a coenzyme for an enzyme called serine hydroxymethyltransferase (SHMT), which is involved in the production of nucleic acids.

Vitamin B6 (PLP) is involved in different aspects of inflammation and the immune response.

More specifically, PLP acts as coenzyme for different enzymes in a chemical pathway called the kynurenine pathway. This pathway is important in regulating the activation of pro- and anti- inflammatory cytokines and the recruitment of various immune cells.

Homocysteine is an amino acid that is produced by the body. It gets generated as an intermediate during a complex metabolic process known as the methionine cycle. You can read more about this cycle in the Homocysteine and your folate genes explained article.

Alternatively, it can also be converted into another amino acid, cysteine.  This conversion takes place as part of a metabolic pathway known as the transulfuration pathway. Vitamin B6 (PLP) is important in this pathway, with PLP acting as a coenzyme for two enzymes that convert homocysteine into cysteine. By helping convert homocysteine into cysteine, Vitamin B6 (PLP) plays a crucial role in keeping homocysteine levels in check. This is important because high levels of homocysteine are thought to damage the linings of arteries, promote blood clots, and are linked to an increased risk of cardiovascular disease (e.g. coronary artery disease, heart attack and stroke).

How much Vitamin B6 do I need per day?

You’ve likely heard of the term ‘Recommended Daily Allowance (RDA)’ before. The RDA refers to the average amount of a nutrient needed to be consumed each day to meet the requirements of nearly all (97-98%) of healthy individuals.

According to NIH (National Institutes of Health) guidelines, the RDA for Vitamin B6 is:

Some studies suggest that elderly people may have higher Vitamin B6 requirements. In line with this, the Linus Pauling Institute (an institute devoted to micronutrient research at Oregon State University) suggest that adults over 50 years old should be consuming 2 mg of Vitamin B6 per day. They recommend such individuals take daily supplements containing at least 2 mg of Vitamin B6.

What are good sources of Vitamin B6? Vitamin B6 is found in several foods and certain foodstuffs (e.g. breakfast cereals) are often fortified with B6. Generally speaking, most people are able to meet their RDA of Vitamin B6 (according to NIH guidelines) through foods alone (i.e. without taking supplements).

Foods that are particularly rich in Vitamin B6 include:

Several plant foods contain Vitamin B6 in the form of pyridoxine glucoside. This form is less bioavailable, meaning less of it is absorbed into the bloodstream. Consequently, people adhering to strict vegetarian or vegan diets may need to consider supplementation or eating more foods fortified with Vitamin B6.

What is a healthy Vitamin B6 level?

As mentioned earlier, one of the active forms of Vitamin B6 is PLP (pyridoxal 5’ phosphate). Typically, levels of PLP in blood plasma are used to measure someone’s overall Vitamin B6 status.

Plasma PLP levels between 20 and 30 nmol/L are considered suboptimal.

Someone with a plasma PLP level below 20 nmol/L is considered Vitamin B6 deficient.

Interestingly, a significant proportion of the population are Vitamin B6 deficient, despite many having Vitamin B6 intakes above the RDA. For example, the 2003-2004 National Health and Nutrition Examination Survey (NHANES) found that, of over 6000 US citizens surveyed, 5% of males and 15% of females had Vitamin B6 deficiency (i.e. plasma PLP level below 20 nmol/L).

Nevertheless, severe deficiency of Vitamin B6 is very uncommon.

What are health risks of low Vitamin B6 levels?

Vitamin B6 deficiency and suboptimal Vitamin B6 levels have been associated with an increased risk of cardiovascular disease, depression, and certain cancers.

Despite these findings, it is hard to discern whether low Vitamin B6 levels are directly causing these conditions or are simply a marker of other causative processes (e.g. inflammation). On a related note, evidence that Vitamin B6 supplementation improves disease outcomes and cuts disease risk is mixed.

Similarly, another Taiwanese study found that people with plasma PLP levels less than 30 nmol/L had a 1.85 times higher risk of coronary artery disease compared to those with plasma LP levels greater than or equal to 30 nmol/L.

Despite the association between low Vitamin B6 levels and greater cardiovascular disease risk, the evidence that taking Vitamin B6 supplements cuts your risk of cardiovascular disease is mixed. For example, two large Norwegian trials (the Norwegian Vitamin Trial and the Western Norway B Vitamin Intervention Trial) found that Vitamin B6 supplementation had no effect on risk of heart attack or stroke.

Despite this finding, studies have found no evidence that Vitamin B6 supplementation reduces the risk of developing cancers. For example, the Women's Antioxidant and Folic Acid Cardiovascular Study found that taking Vitamin B6 (combined with folic acid and Vitamin B12) had no effect on the development of colorectal adenoma.

Some studies have shown that lower Vitamin B6 levels are associated with increased symptoms of depression in older people. For instance, a study of elderly individuals from the Chicago Health and Aging Project found that lower total Vitamin B6 intakes were linked to a greater risk of depressive symptoms.

Who is at greater risk of low Vitamin B6 levels?

Some individuals are at a greater risk of Vitamin B6 deficiency as a result of poorer absorption, increased clearance, and/or impaired conversion between the different forms of Vitamin B6. This includes the elderly, as well as people with the following conditions:

How do gene variants affect Vitamin B6 levels?

In particular, studies have found that some variants of our ALPL and NBPF3 genes are associated with lower plasma PLP levels.

Our ALPL gene encodes an enzyme known as alkaline phosphatase. It’s thought that this enzyme plays a role in clearing and degrading Vitamin B6 (PLP).

Our NBPF3 (neuroblastoma breakpoint family, member 3) gene is located close to the ALPL gene. The role of this gene in Vitamin B6 metabolism is unknown.

A SNP within the ALPL gene, rs1256335, creates two different variants or ‘alleles’: the ‘G’ allele and the ‘A’ allele.   A meta-analysis of the Nurses’ Health Study (NHS) NCI-Cancer Genetic Markers of Susceptibility (CGEMS) project and Framingham-SNP-Health Association Resource (SHARe) studies found that people carrying the ‘G’ allele had lower plasma PLP levels compared to those with two copies of the ‘A’ allele.

The same study also found that the ‘C’ allele of the NBPF3 gene, created by the rs4654748 SNP, was also associated with lower plasma PLP levels.

Another meta-analysis of four large studies (InCHIANTI, SardiNIA, BLSA, and Progetto Nutrizione studies) found that ‘C’ allele of the ALPL gene, created by the rs4654748 SNP, was associated with lower Vitamin B6 levels.

The authors suggested that this observation was perhaps due to the ‘C’ allele encoding an ALPL enzyme that more efficiently clears Vitamin B6.

Your Vitamin B6 Levels Trait analyses several different SNPs / variants of your ALPL and NBPF3 gene.

Your Vitamin B6 Levels Trait

Your Vitamin B6 Levels trait classifies your predicted Vitamin B6 levels into three categories based on what ALPL and NBPF3 gene variants you carry: