Estrogen is one of the primary female sex hormones (the other being progesterone).

We’ve previously explained what primary sex hormones are in your testosterone level trait. To recap: sex hormones are chemical messages that regulate the growth and function of reproductive organs (e.g. ovaries and testes) and govern the development of secondary sexual characteristics.

Secondary sexual characteristics include features like the development of breasts and wider hips in females, or the growth of facial hair in males. These characteristics emerge during puberty and differ between the sexes.

Estrogen is responsible for secondary sexual characteristics in females, such as: the enlargement of breasts, enlargement of uterus and vagina, widening of the hips, higher-pitched voice and a female distribution of body fat.

Despite being termed a ‘female’ sex hormone, estrogen is produced by and plays several important roles in both men and women. Such roles include the regulation of bone health, reproductive health, inflammation and sugar and fat metabolism.

What are the different forms of estrogen?

There are actually 4 types of estrogen:

Estradiol (E2) is the most potent form of estrogen responsible for most of estrogen’s effects in the body. As a result, when used in health and fitness, the term ‘estrogen’ typically refers specifically to estradiol (E2).

In females, estrogen regulates the menstrual cycle. Specifically, a rise in estrogen during the first part of the cycle (the follicular phase) causes thickening of the lining of the endometrial lining of the uterus.

In males, estrogen helps to regulate the production of sperm (a process called spermatogenesis). It also plays a role in erectile function.

Estrogen (along with testosterone) influences sex drive in both men and women.

Interestingly, the incidence of cardiovascular disease (e.g. heart attack and stroke) is lower in women compared to men. One explanation for this phenomenon is that women produce more estrogen - which has a protective effect on the heart and blood vessels. Studies suggest that estrogen promotes vasodilatation(widening of blood vessels) and helps to prevent the formation of plaques within blood vessel walls (a process called atherosclerosis).

Estrogen influences the storage, breakdown and use of glucose and fats for energy. There are several complex mechanisms by which estrogen does this. Estrogen’s effect on the production and function of insulin thought to be one key mechanism. Insulin is the hormone that allows sugar (glucose) circulating in the bloodstream to be taken up by tissues such as skeletal muscle and the liver. Estrogen is thought to stimulate the production of insulin by beta cells in pancreas, as well as increasing the sensitivity of tissues to insulin.

Estrogen regulates the activity white blood cells, which help to fight infection and cause inflammation.

Where is estrogen produced?

Estrogen is also produced by the corpus luteum, a temporary structure in the ovary that forms from ovarian follicles in the first two weeks of the menstrual cycle. After the menopause, estrogen production by the ovaries drops dramatically.

A smaller amount of estrogen is produced by so-called ‘peripheral tissues’ outside of the ovary. Such tissues include: breast tissue, fat cells, bone, skin and blood vessels. Rather than produce estrogen directly from cholesterol, these tissues convert androgens such as testosterone (T) or androstenedione into estrone or estradiol (E2). They do this by using an enzyme called aromatase.

The production of estrogen by peripheral tissues is much more significant in post-menopausal women (as estrogen production directly by the ovaries declines).

As men lack ovaries, they produce significantly less estrogen than women. Estrogen in men is produced from the conversion of androgens (e.g. testosterone) by an enzyme called aromatase. This process occurs in various peripheral tissues, including in the testes (Leydig and Sertoli cells), bone, and fat (adipose) tissue. 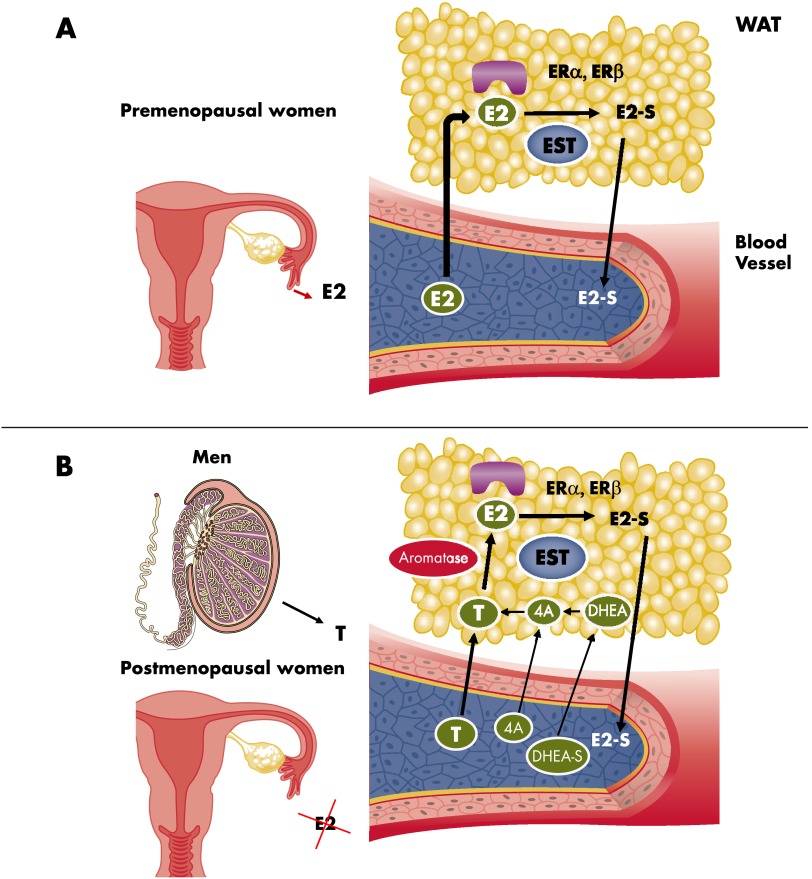 How is estrogen produced?

Like other sex steroid hormones (e.g. testosterone), estrogen is derived from cholesterol – a fat-like substance made in the liver and contained in various foods.

Pre-menopausal women produce the majority of estrogen in the ovaries as part of the menstrual cycle. This process is regulated by a cycle of hormones released by two structures in the brain: the hypothalamus and the pituitary gland.

In the first stage of estrogen production, LH stimulates theca cells in the ovary to convert cholesterol into pregnenolone. Pregnenolone is then converted by enzymes (including the 17 alpha hydroxylase enzyme) into various intermediary androgen hormones, including DHEA, androstenodione and testosterone.

In the second stage, androstenodione and testosterone are converted into estrogens by the aromatase enzyme. This process occurs in the granulosa cells of the ovary and is stimulated by FSH (see diagram). 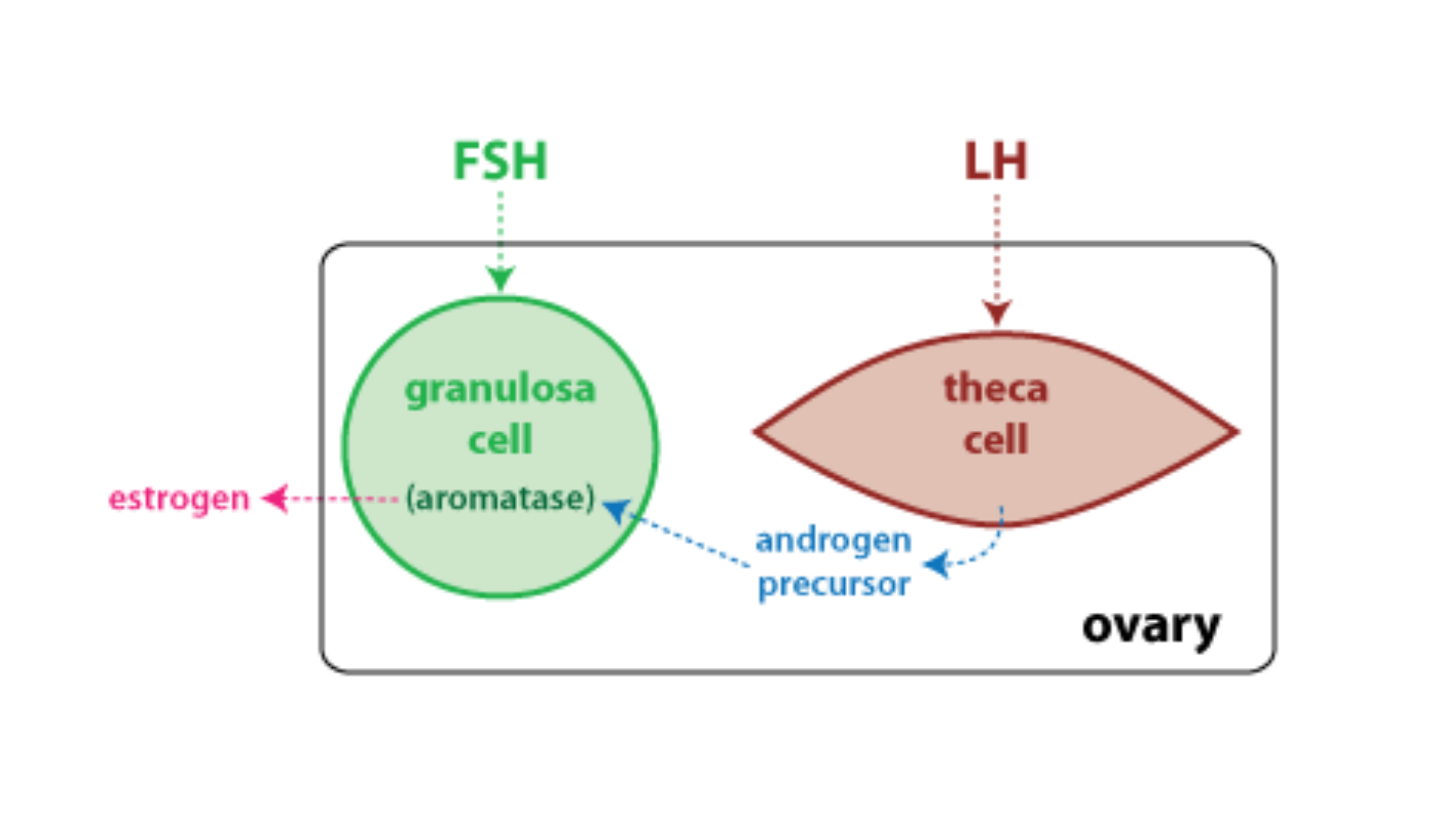 In post-menopausal women, estrogen production by the ovaries drops dramatically, so estrogen must be produced locally by other tissues. Similarly, men (who do not have ovaries) must also rely on the local production of estrogen in peripheral tissues.

In peripheral tissues, estrogen is made from the conversion of androgen hormones (e.g. testosterone). Tissues such as fat, brain, bone and blood vessels produce an enzyme called aromatase. Aromatase converts testosterone directly into estradiol (E2), the most potent form of estrogen.

How is estrogen transported in the blood?

Given this, your SHBG levels have an influence your level of circulating estrogen.

In men and post-menopausal women, there is very little estrogen circulating in the bloodstream. Rather, estrogen is produced locally in various peripheral tissues by the aromatase enzyme.

Nevertheless, these tissues require androgens (e.g. testosterone) to make estrogen. These androgens circulate in the bloodstream.

How does estrogen exert its effects in the body?

Like testosterone, estrogen is a sex steroid hormone. As they are fat soluble, steroid hormones are able to penetrate the outer lipid membrane and enter the inside of cells, where they exert their effects by binding to special steroid receptors.

Estrogen binds to special steroid receptors called estrogen (ER) receptors. When estrogen binds to ER receptors, the receptors move into the nucleus (the central part of the cell containing DNA and genetic material). They then alter the way different genes are switched on and off and converted into proteins (a process called ‘gene expression’).

There are two main types of ER receptors: ERα and ERβ. These are coded for, respectively, by your ESR1 and ESR2 genes. Variations of these genes can alter the function of your estrogen receptors, and thereby influence the effects of estrogen in your body.

Estrogen (estradiol) levels fluctuate over the course of a lifetime. This differs between men and women.

Estrogen levels rise rapidly in adolescence, where estrogen produced by the ovaries stimulates the development of secondary sexual characteristics (e.g. development of breasts). They then remain high during adulthood and help maintain regular menstrual cycles.

When women reach the menopause, which is typically between ages 45 and 55, estrogen production by the ovaries drops significantly. Estrogen levels remain low thereafter.

In contrast to women, estrogen levels in men only gradually rise during adolescence. They then remain fairly stable for the remainder of adulthood.

What are the consequences of low estrogen production?

Estrogen plays vital roles in fat and glucose metabolism, bone health, immune function and blood flow. When estrogen production is low, these processes may be compromised.

Studies suggest that low levels of estrogen are linked to poorer insulin sensitivity in both men and women. Insulin is the hormone that allows tissues to take up and use glucose from the bloodstream. When tissues in the body are less sensitive to insulin, it becomes more difficult for tissues to take up glucose. Consequently, glucose levels in the blood rise. Elevated blood glucose levels in the long term can cause damage to blood vessels and also increase the risk of cardiovascular disease and type II diabetes.

Estrogen acts to both stimulate the formation of new bone and limit the breakdown (or ‘resorption’) of existing bone.

When estrogen production is low, bone mass may subsequently decrease. This increases the risk of osteoporosis – a condition characterised by increasingly fragile bones which are more susceptible to fracture.

Estrogen has a ‘vasoprotective’ effect on the cardiovascular system – it helps to prevent the build up plaques (called atheroma) on blood vessel walls. People (particularly men) with low levels of estrogen may be at increased risk of atherosclerosis – a cardiovascular disease where plaques build on arterial walls.

What are the consequences of high estrogen production?

In pre-menopausal women, high levels of circulating estrogen has been linked to:

In men, high levels of estrogen (particularly in relation to testosterone) has been associated with:

The production of estrogen is a complex process with both environmental factors (e.g. diet, lifestyle, body composition, medication) and genetics playing major roles.

At FitnessGenes, we analyse common variations (SNPs) in the genes encoding these enzymes. Certain gene variants may affect the activity of these enzymes, and thereby influence your production of estrogen.

Two such genes are:

This gene encodes the aromatase enzyme, which is responsible for producing estrogen from androgens (e.g. testosterone and androstenodione). Variations in the CYP19A1 gene may influence how effectively the ovaries (in pre-menopausal women) and peripheral tissues (in men and post-menopausal women) convert androgens into estradiol (E2).

This gene encodes the 17β-HSD enzyme. This enzyme converts the weak estrogen, estrone (E1), into the more potent estradiol (E2). It is also involved in converting the androgen androstenodione into testosterone, which is part of the estrogen production pathway. Variations in the CYP17A1 gene may influence how effectively the ovaries (in pre-menopausal women) and peripheral tissues (in men and post-menopausal women) make estradiol (E2).

We also analyze several other gene variants related to estrogen metabolism. For example, we look at variants of the SHBG (sex-hormone binding globulin) and estrogen receptor genes (ESR1, ESR2).