ApoE stands for apolipoprotein E. Like ApoA2 and ApoA5, which we encountered in your previous traits, ApoE is a type of specialized protein called an apolipoprotein.

ApoE is unique in that it can exchange between different lipoprotein particles, including:

In addition to facilitating the transport and metabolism of fat in the bloodstream, ApoE regulates the movement and use of fats by our central nervous system (brain and spinal cord). It is therefore important for maintaining good mental and neurological health.

What is the role of ApoE?

ApoE has several functions in the body, including:

Clearance of lipoprotein particles from the bloodstream by the liver

ApoE binds to specialized receptors on the surface of liver cells, including LDL-receptors and HSPG (heparin sulphate proteoglycans). When this occurs, the liver internalises the lipoprotein particles, thereby removing them from the bloodstream. In this way, ApoE helps to regulate levels of fat (triglycerides) and cholesterol circulating in blood plasma.

The diagram below shows how ApoE binds to receptors on liver cells, thereby enabling the removal of chylomicron remnants (CM REM) from the bloodstream. Deposition of triglycerides in adipose tissue

When we consume excess calories in our diet, some of the excess energy gets stored as fat (in the form of triglycerides) in adipose tissue. ApoE facilitates the transfer of triglycerides in lipoprotein particles to be stored in fat cells called adipocytes.

HDLs (High-density lipoproteins) are particles that transport cholesterol away from peripheral tissues to be removed by the liver. This includes cholesterol contained within white blood cells (called foam cells) that are found in fatty plaques lining the walls of arteries. Given this cholesterol-removing effect, cholesterol within HDL particles is often called “good” cholesterol. ApoE is critically involved in the formation of certain HDL particles.

Transporting fats and cholesterol for use by brain and nerve cells

Lipoprotein particles carrying fat and cholesterol within the bloodstream cannot readily enter the brain. This is because our brain is surrounded by a protective border called the blood-brain-barrier, which only allows certain molecules through.

Nevertheless, our brain still requires fat and cholesterol to function effectively. For example, cholesterol is required to make cell membranes, as well as the myelin sheath that insulates neurons, ensuring nerve signals are transmitted efficiently. Cholesterol is also important for the formation of synapses: the connections between different neurons.

Inflammation is the body’s protective response against tissue injury and harmful stimuli. We’ve encountered inflammation before in the Il-6 and inflammation trait.

ApoE is shown to have various effects on the body’s inflammatory response, including the suppression of pro-inflammatory cytokines and certain types of white blood cells (T cells).

There are three different forms (called isoforms) of the ApoE protein, which differ from one another in structure by a single amino:

Due to variations in structure, the different ApoE isoforms vary in their activity and their ability to bind to various receptors. Consequently, the way we transport, use and metabolize fat and cholesterol is affected by which particular ApoE isoforms we produce.

How do genes affect which ApoE forms we produce?

Recall that genes are units of DNA that code for a particular protein. In this respect, the ApoE apolipoprotein is coded for by a gene called APOE.

The different isoforms of ApoE (ApoE2, ApoE3 and ApoE4) are generated by variants (or alleles) of the APOE gene, which are denoted:

As we inherit pairs of alleles (gene variants), one from each parent, the three variants give rise to six possible gene combinations (called genotypes), with the corresponding apolipoproteins:

How do the different ApoE forms affect lipid (fat and cholesterol) metabolism?

As mentioned earlier, due to single amino acid changes, the three ApoE isoforms differ from one another in their molecular structure.

These structural changes give rise to differences in the function and activity between the various ApoE isoforms. In turn, this leads to alterations in how we transport, metabolize and clear fat and cholesterol contained within lipoprotein particles.

ApoE3, the most common isoform, is associated with normal activity and lipid metabolism.

Compared to ApoE3, ApoE2 is associated with reduced clearance of lipoprotein particles by the liver. This is because the ApoE2 molecule binds less well to the LDL receptor found on the surface of liver cells. As a result of this, people who only produce ApoE2 (i.e. those with the APOE ε2 / ε2 genotype) are more likely to have higher levels of triglyceride and cholesterol-rich lipoprotein particles (such as VLDL and chylomicron remnants) circulating in their bloodstream.

Compared to ApoE3, ApoE4 binds better to VLDL particles. This can lead to increased levels of LDL particles, which transport cholesterol to be used by peripheral cells or be deposited in fatty plaques on arterial walls. People who only produce ApoE4 (i.e. those with the APOE ε4 / ε4 genotype) are therefore more likely to have higher levels of ‘bad’ LDL cholesterol circulating through their bloodstream. 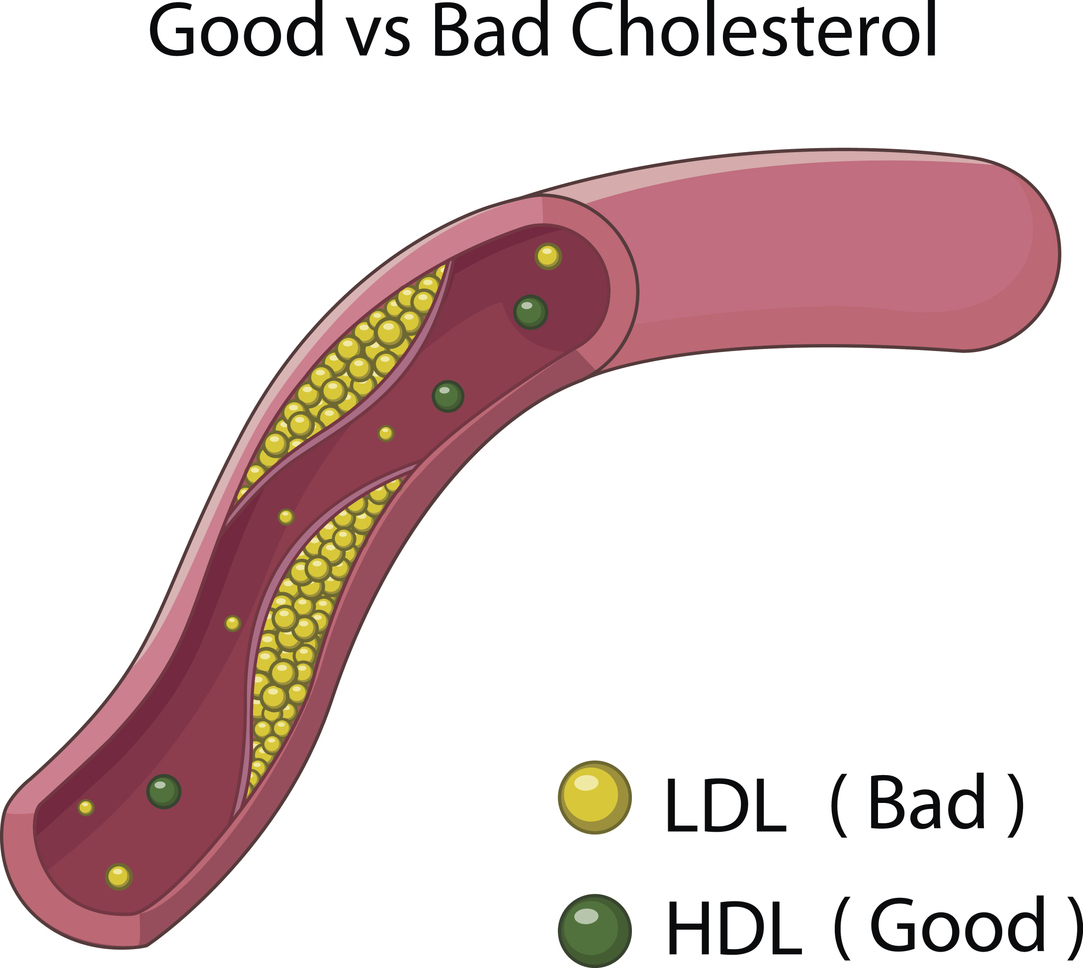 The reason that ApoE4 increases the levels of LDL cholesterol is complicated. As mentioned before, one function of ApoE is to facilitate the clearance of lipoprotein particles by binding to LDL receptors on liver cells. VLDL particles that contain a lot of ApoE4 on their surface are therefore more likely to bind to the LDL receptor and be cleared from the bloodstream. When this occurs, however, the liver responds by producing fewer LDL receptors (a process called downregulation). Due to this process, the liver becomes less effective at clearing LDL particles, which are rich in cholesterol. Consequently, LDL particles start to accumulate in the bloodstream and are more likely to deposit cholesterol in arterial linings.

How do the different ApoE variants affect physical and mental health?

Due to differences in lipid metabolism (explained in the previous section), the different ApoE isoforms have implications for our cardiovascular, metabolic and neurological health.

You can find out more about this your Insights, with advice on how to optimize your physical and mental health in your Actions.

ApoE2 is associated with increased levels of VLDL particles, which can lead to elevated blood triglycerides and cholesterol. This, in turn, can increase the risk of cardiovascular diseases, such as atherosclerosis, heart disease and stroke.

Similarly, ApoE4 is associated with higher levels of ‘bad’ LDL cholesterol, which has been linked to the development of fatty plaques in arterial walls (atherosclerosis).

Your Actions will give you advice on how you can adapt your diet and exercise regimes to counteract these effects and maintain healthy blood lipid levels.

ApoE plays a role in suppressing aspects of the inflammatory response. Furthermore, ApoE regulates the amount of fat and cholesterol circulating in our bloodstream; and high levels of both these lipids can give rise to inflammation.

Given this relationship, different ApoE isoforms can affect the degree of inflammation occurring within various tissues in the body. Inflammation itself plays a role in aging, including the aging of nerve cells, and the development of cardiovascular and metabolic (e.g. Type II diabetes) diseases.

One of the key roles of ApoE is to facilitate the transport of fat and cholesterol to be used by the nervous system, including the brain. In particular, cholesterol is important for the growth and repair of neurons and the development of synapses.

ApoE isoforms can therefore significantly influence the health of your brain and nervous system. In this respect, maintaining healthy blood lipid levels (e.g. through diet and exercise) can help to optimize your neurological and mental health. Regular physical activity and keeping mentally active are also good ways of sustaining good neurological health.