BCAAs stands for branched chain amino acids. It is the collective name for three particular amino acids (the building blocks of proteins):

Due to these roles, BCAAs are a popular pre-workout supplement, where they are used to stimulate muscle protein synthesis and boost muscle growth, reduce muscle soreness after a workout, and help to prevent fatigue during exercise.

As well as being in various supplements and protein powders, BCAAs are also found in various foods, including: red meat, poultry, eggs, dairy products, nuts, lentils and beans.

The BCAAs are essential amino acids. This means they must be consumed in our diet as we cannot synthesise them ourselves.

We’ve encountered BCAAs before in your BCAAs and Insulin (PPM1K) trait. Readers are encouraged to visit the accompanying blog article for further background.

How are BCAAs broken down?

Certain metabolites of BCAAs can be toxic in high concentrations. Therefore, our body has developed a complex system of enzymes for breaking down and preventing the excess build-up of BCAAs in the bloodstream and within cells.

In contrast to other amino acids, BCAAs are mainly broken down by peripheral tissues (such as skeletal muscle) rather than by the liver.

The rate at which we break down or ‘catabolise’ BCAAs is a key factor that determines the levels of BCAAs circulating in our bloodstream.

Absorption into the bloodstream

Before BCAAs from our diet are broken down, they must first be absorbed into the bloodstream. This occurs in the gut. 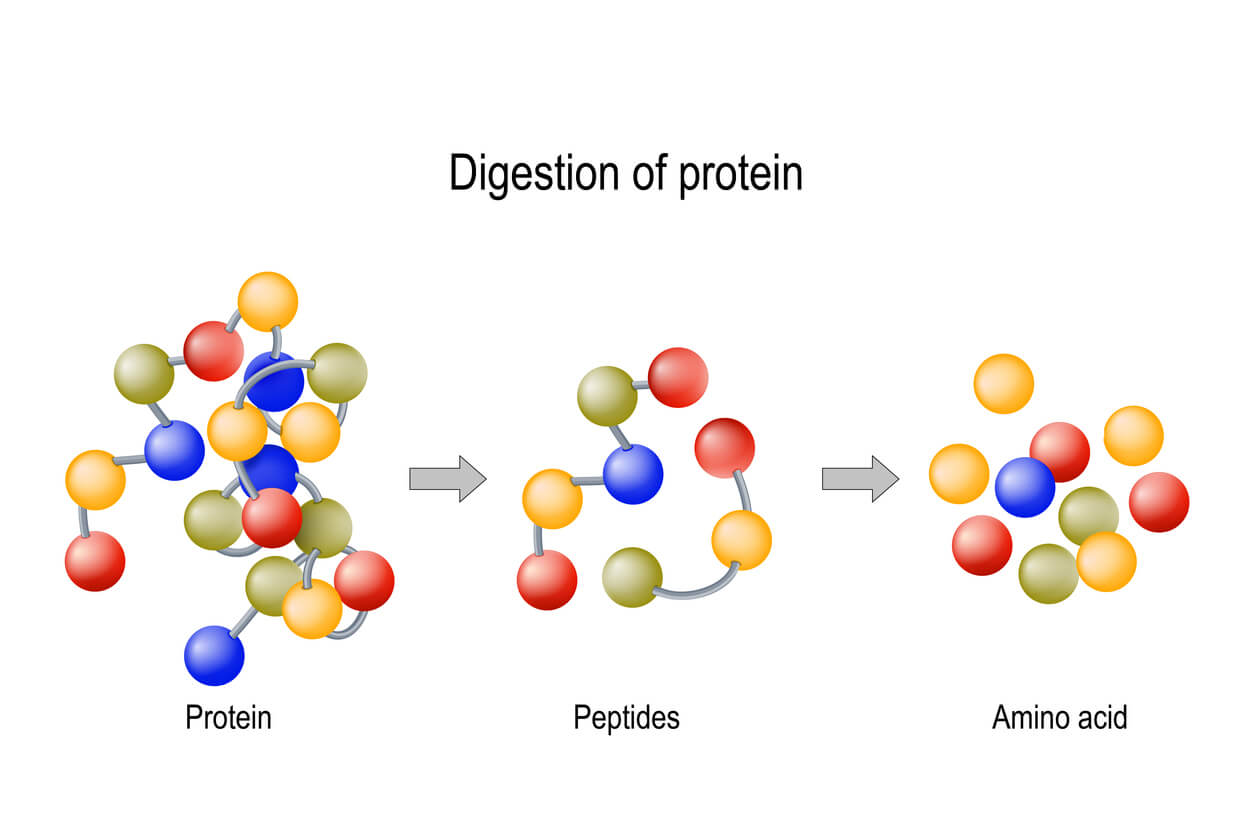 By contrast, the BCAAs in supplements tend to be in ‘free form’ i.e. individual amino acids that are not part of larger proteins. Free form BCAAs do not need to be digested and are therefore more rapidly absorbed into the bloodstream.

Breakdown of BCAAs by enzymes

Once in the bloodstream, BCAAs are taken up by cells in various tissues, including skeletal muscles and adipose (fat) tissue.

BCAAs then enter mitochondria – the cell organelles responsible for respiration and producing energy - where they are broken down in steps by different enzymes.

The branched-chain acyl CoAs are then further broken down by other enzymes to produce the molecules acetyl-CoA and succinyl-CoA. These two molecules can be used to generate energy by entering a stage of cell respiration known as the citric acid (TCA) cycle. Alternatively, they can be used to build glucose (a process called gluconeogenesis).

It is the second step of BCAA breakdown, catalysed by the BCKDH enzyme complex, that is arguably the most important step. This is because it is the slowest or ‘rate-limiting step’ that determines how quickly and effectively we break down BCAAs. This, in turn, affects our levels of circulating BCAAs.

On this note, rare mutations that impair the function of the BCKDH enzyme (and therefore BCAA breakdown) can cause an inherited disorder called maple syrup urine disease. Babies born with this condition may suffer from neurological damage caused by the build-up of excessive levels of BCAAs and BCKAs. Characteristically, high levels of BCKAs in urine gives rise to an odour reminiscent of maple syrup.

As explained in the previous section, reduced or impaired BCAA breakdown can lead to higher levels of BCAAs circulating in the bloodstream. Both reduced BCAA breakdown and high circulating BCAA levels have been linked to a number of related health conditions, including: obesity, type II diabetes, fatty liver disease, and coronary artery disease.

In particular, is it thought that high circulating levels of BCAAs can cause insulin resistance – poor sensitivity of tissues to the actions of insulin.

Insulin resistance, in turn, can lead to high blood sugar levels, weight gain and the development of Type II diabetes.

What is insulin resistance?

Insulin is an extremely important hormone that allows tissues to take up and use glucose from the bloodstream. It also plays key roles in regulating fat metabolism. In insulin resistance, tissues (such as skeletal muscle) become less sensitive to insulin, making it harder for glucose to enter cells. Instead, glucose lingers in the bloodstream causing elevated blood glucose levels. As explained in your Fasting Blood Glucose trait, high blood glucose levels can cause inflammation and oxidative stress, which damages blood vessels, nerves and other organs.

Moreover, if tissues remain insensitive to the effects of insulin, your body may respond by producing much higher amounts of insulin. This is known as hyperinsulinaemia.

As insulin promotes fat deposition (lipogenesis) and inhibits fat breakdown (lipolysis), increased insulin levels can lead to weight gain and accumulation of fat in and around organs.

How do BCAAs cause insulin resistance?

It is still not precisely understood how reduced BCAA breakdown and increased levels of circulating BCAAs cause insulin resistance.

One theory is that high levels of BCAAs stimulate a biochemical pathway called the mTOR pathway, which leads to impaired insulin signalling. (You can read more about the mTOR pathway before in your Muscle Hypertrophy (mTOR) trait). In order to exert its effects in cells, insulin binds to a receptor called the insulin receptor (IR). This then triggers a cascade of chemical reactions (known as the insulin signalling pathway) that sequentially activate various molecules, ultimately resulting in certain genes being switched on and glucose entering cells.

One of first molecules activated in the insulin signalling pathway is called IRS-1 (insulin receptor substrate 1). This molecule, however, is inhibited by an enzyme in the mTOR pathway called S6K1.

By stimulating the mTOR pathway and activating S6K1, high levels of BCAAs therefore inhibit IRS-1 and may impair insulin signalling. This causes cells to become less responsive to insulin, resulting in insulin resistance. There are several other possible mechanisms by which reduced BCAA breakdown and high BCAA levels contribute to insulin resistance. For example, impaired breakdown of BCAAs in muscle can lead to the accumulation of various BCAA metabolites, one of which is 3-HIB (3-hydroxyisobutyrate) formed from the breakdown of valine.

The build-up of 3-HIB causes fats to accumulate in muscle tissue, which leads to poorer insulin sensitivity of skeletal muscles. 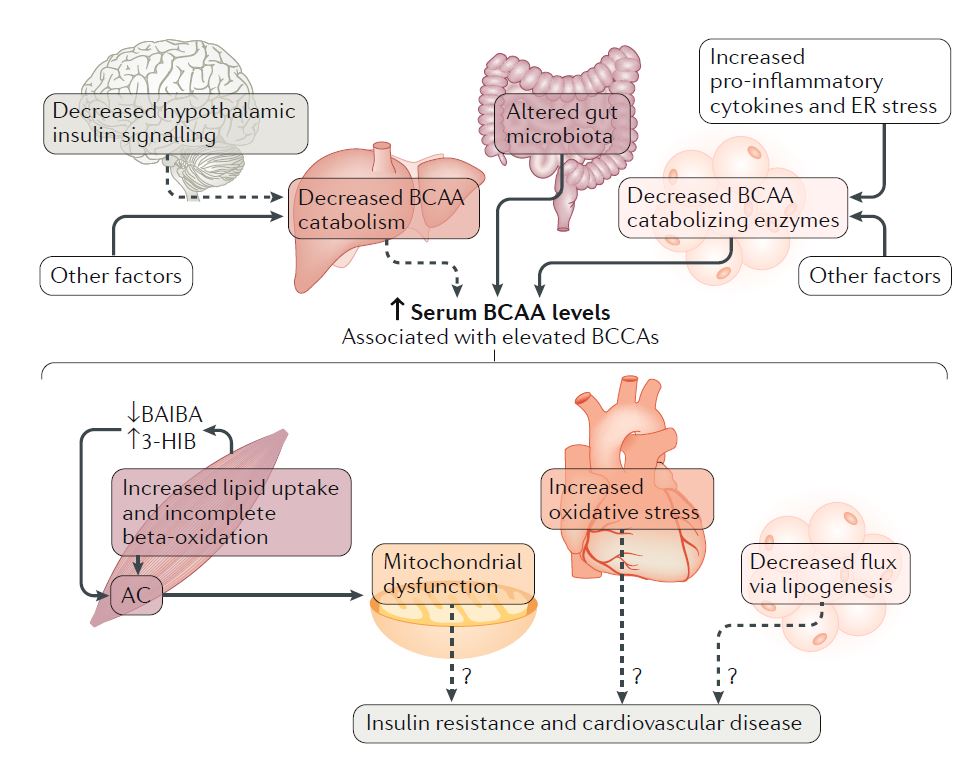 How do gene variants affect the breakdown of BCAAs?

The genes we inherit can influence the rate at which we break down BCAAs.

For example, as explored in your BCAAs and Insulin (PPM1K) trait, certain variants of your PPM1K gene are associated with lower activity of the BCKDH enzyme that breaks down BCAAs.

In your BCAA breakdown trait, we focus more on how certain genes involved in the breakdown of BCAAs are switched on and off. This falls under the banner of epigenetics – changes that can alter the activity of genes without changing your underlying DNA sequence.

What are epigenetic changes?

Epigenetic changes or ‘modifications’ allow us to respond to our changing environment by activating and deactivating genes in response to different environmental cues, such as nutrients in our diet, psychological stress, exercise, exposure to pollutants etc.

For example, exposure to a toxin may cause us to switch on genes that lead to the production of an enzyme that break down that toxin.

Epigenetic changes, however, are not always helpful. Exposure to air pollutants, for instance, can switch on the production of enzymes that lead to inflammation, oxidative stress, and cell damage.

On a molecular level, epigenetic modifications may involve attaching and removing substances to the outside of the DNA molecule. One example of this is called DNA methylation.

DNA methylation involves attaching a CH3 molecule, called a methyl group, to specific sites along the DNA molecule. Generally speaking, adding a methyl group ‘silences’ or switches a gene off: meaning the gene instructions are not read and used to produce a protein. To adopt scientific lingo, we say that DNA methylation turns off gene transcription.

In this trait, we look at DNA methylation of genes involved in the breakdown of BCAAs.

Studies suggest that DNA methylation of a particular site (cg04436964) in response to high intakes of saturated fat can switch off various genes, leading to reduced breakdown of BCAAs.

Moreover, inheriting certain gene variants may make some people may be more susceptible DNA methylation at this site when following a diet high in saturated fat. Consequently, people with these gene variants show reduced BCAA breakdown in response to high intakes of saturated fat.

On this note, people with the CC genotype of the APOA2 gene (caused by the rs5082 SNP) are shown to be more susceptible to DNA methylation when following a high saturated fat diet (≥22g sat fat per day). Increased methylation causes these people to switch off production of enzymes involved in the breakdown of BCAAs. Impaired BCAA breakdown may, in turn, contribute towards poor insulin sensitivity and insulin resistance.

Other studies support this finding. For example, a study of Chinese and Asian Indians found that those with CC APOA2 genotype had higher HOMA-IR scores – a measure of insulin resistance – but only when following a diet high in saturated fat (≥22g sat fat per day). 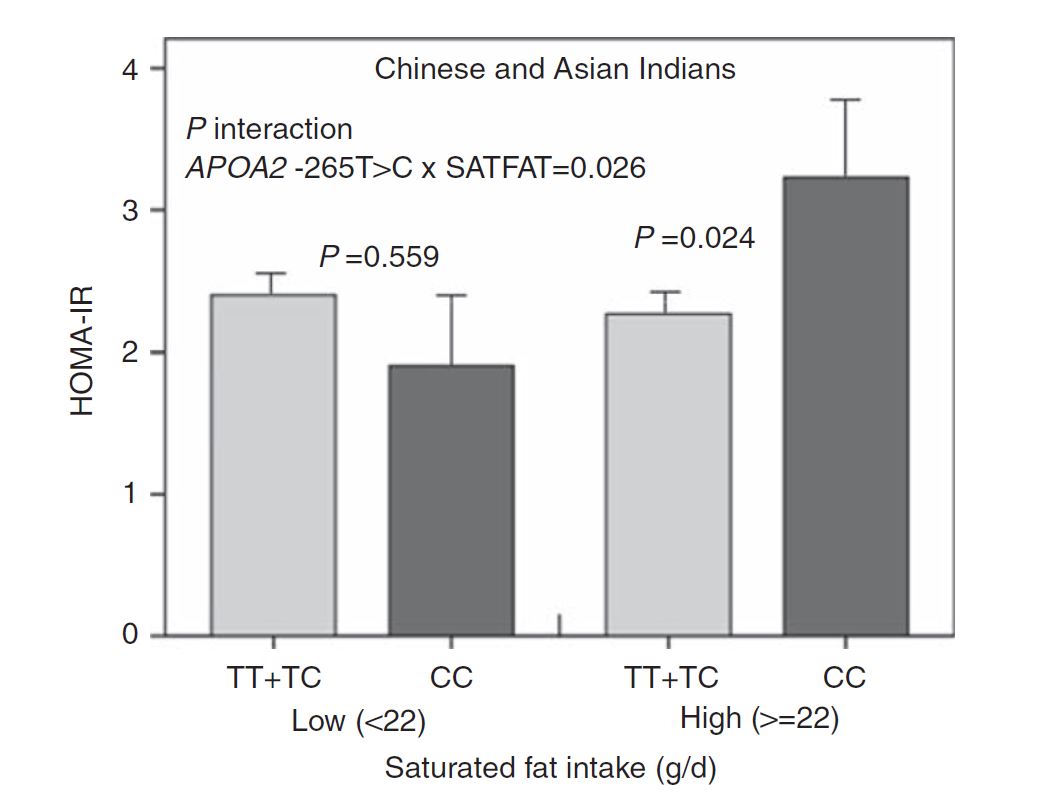 It’s possible that the higher measures of insulin resistance in this group result from increased DNA methylation at specific sites under high intakes of saturated fat. This may cause genes related to BCAA breakdown to be switched off, leading to reduced BCAA breakdown and higher circulating levels of BCAAs that impair insulin function.

How do lifestyle factors affect the breakdown of BCAAs?

Biologists often use the term ‘environmental’ or ‘lifestyle factors’ to describe everything outside of a person’s DNA that influences a person’s traits. This includes fairly simple, measurable factors, such as a person’s current bodyweight or smoking status, to complex, difficult-to-measure factors, such as exposure to psychological stress during childhood.

Several studies suggest that lifestyle factors such as your current BMI, body composition and insulin function can influence BCAA breakdown. For example, people with obesity, high blood sugar levels and/or Type II diabetes have all been shown to have elevated levels of circulating BCAAs.

Moreover, these people also show reduced BCAA breakdown, particularly in adipose tissue. On this note, studies of people with obesity have shown that they have reduced levels of the BCKDH enzyme that catalyses the second step of BCAA breakdown.

We obtain this data from your lifestyle survey, which you can complete here.

Regardless of what gene variants they carry, individuals who are overweight, obese and/or have poor insulin function are more likely to have reduced breakdown/ catabolism of BCAAs.

It’s important to note, however, that, just as lifestyle factors can negatively impact BCAA breakdown, they can also improve BCAA breakdown and reduce circulating BCAA levels. In this respect, exercise has been demonstrated to activate the BCKDH enzyme and stimulate BCAA breakdown. 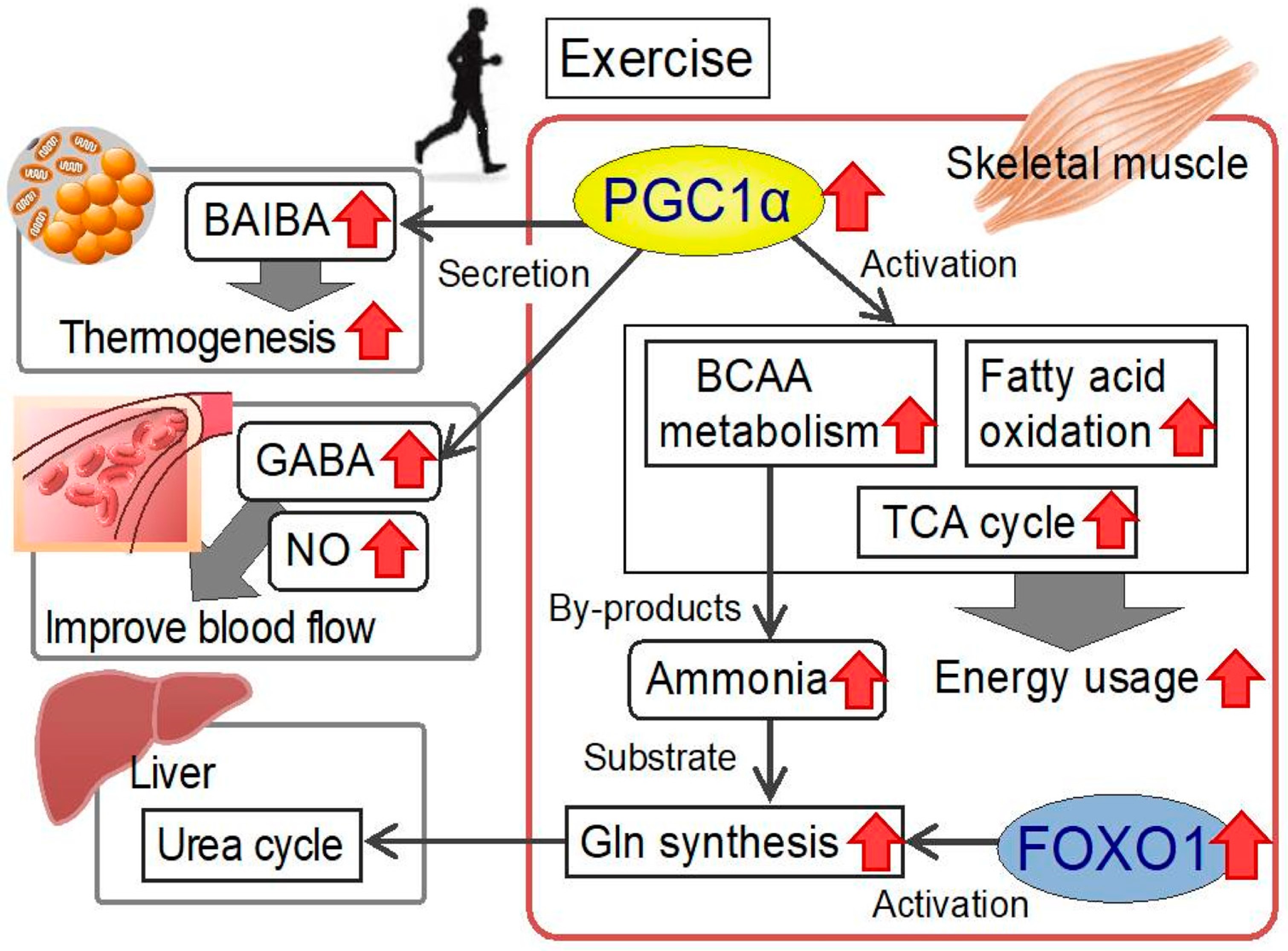 You will be classified into one of three categories: