Insulin is a hormone produced by our pancreas that allows glucose (sugar) to be taken up from the bloodstream and be used by cells and tissues.

One popular analogy is that insulin acts like a key that ‘unlocks’ cells, allowing glucose to enter. When insulin (the key) binds to insulin receptors (the lock) on the surface of cells, it ‘opens up’ specialised glucose channels that allow glucose molecules to pass from the bloodstream into cells. 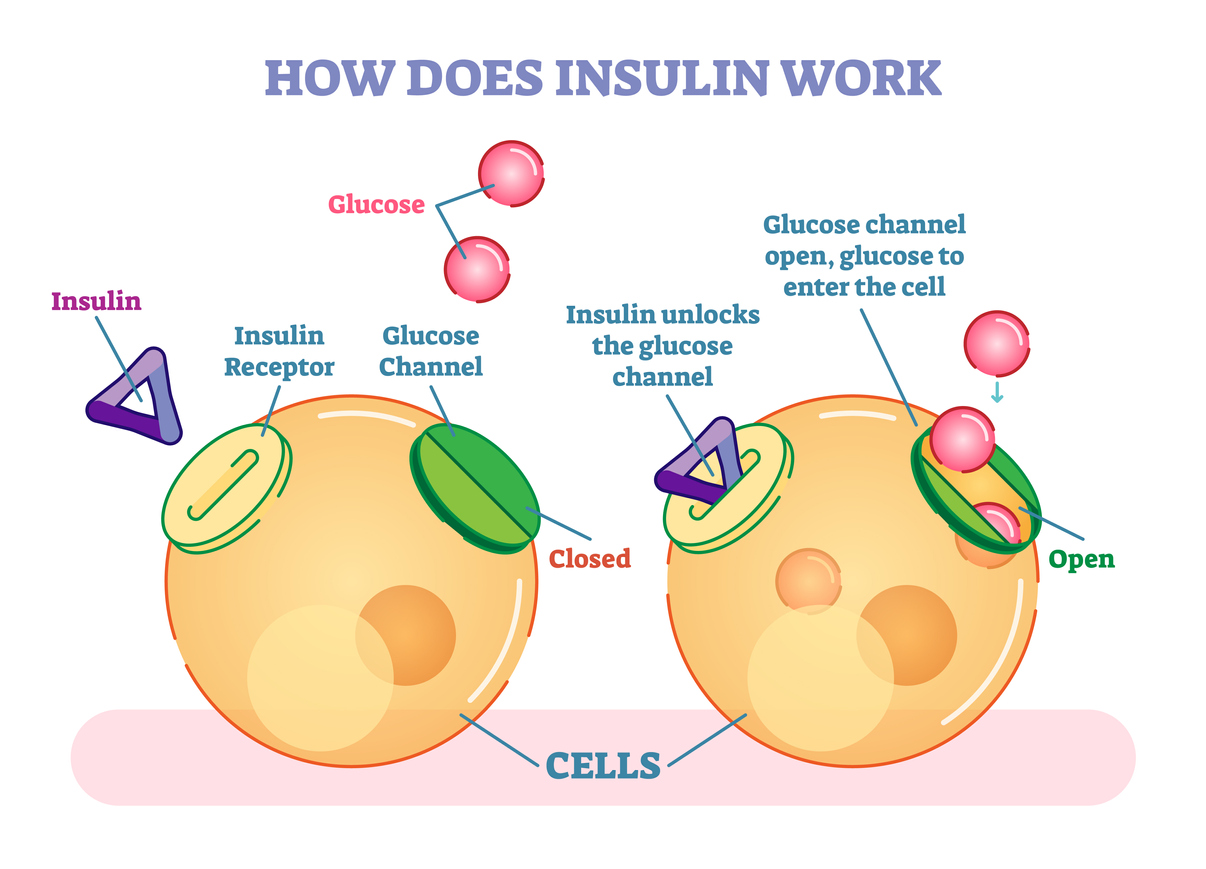 If there are issues with producing and secreting enough insulin, or if cells become less sensitive to the ‘unlocking effects’ of insulin, then it becomes harder for glucose to enter cells. In turn, this can lead to high blood glucose levels, which is damaging to tissue. This is what happens in Type II diabetes, which is characterised by poor insulin function and elevated blood glucose levels.

In addition to facilitating glucose entry into cells, insulin has a number of effects on glucose and fat metabolism. You can read more about these effects of insulin in the Fasting Blood Glucose trait article.

How is insulin made?

Insulin is produced or “synthesised” by specialised cells in our pancreas known as beta-cells. 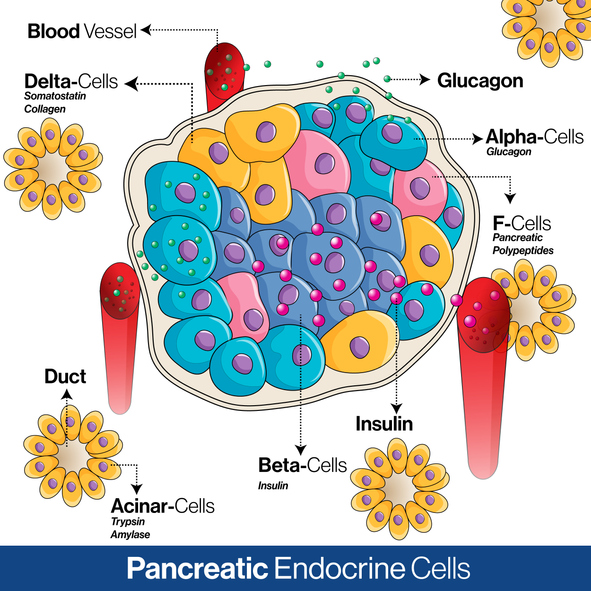 In the first stage of insulin biosynthesis, beta-cells use the genetic code (mRNA) of insulin to make a long protein chain called preproinsulin. This is then cut-down or ‘cleaved’ by enzymes to produce a shorter, intermediate molecule: proinsulin.

Proinsulin is then transported to secretory vesicles or ‘granules’, where it is cutdown into the final or ‘mature’ form of insulin, ready for secretion into the bloodstream. The process by which proinsulin is converted into mature insulin is known as insulin maturation or insulin processing.

Beta-cells can produce and secrete insulin extremely quickly in response to rises in blood glucose levels. Studies suggest that each beta-cell can assemble over 3,000 new insulin molecules per second.

In the nucleus of beta-cells, the insulin gene is switched on and its instructions are read and used to make the preproinsulin protein.

Preproinsulin is made up of four short chains of amino acids which are joined together to make one long chain. These four subunit chains are: the A-chain, C-peptide, B-chain, and the signal peptide. The signal peptide acts similar to a stamped addressed envelope – it directs the preproinsulin molecule to a different part of the cell, the endoplasmic reticulum (ER). In the ER, an enzyme (called a signal peptidase) then removes the signal peptide chain from preproinsulin. This leaves a shorter molecule, proinsulin, which is made up of the remaining A-chain, C-peptide, and B-chain.

Proinsulin is then shuttled into another part of the cell, the Golgi apparatus, where it is sorted and packaged into secretory vesicles or granules. Inside the granules, an enzyme called PC1/3 (prohormone convertase 1/3) cleaves the C-peptide chain from the proinsulin molecule, leaving a mature insulin molecule composed of the remaining A- and B-chains. When blood sugar levels rise after a meal, the secretory vesicles / granules fuse with the outer membrane of beta cells, releasing insulin into the bloodstream.

This enzyme is responsible for converting proinsulin into insulin (a process also known as insulin processing/maturation).

We also encountered this enzyme in the PCSK1 and overeating trait. This is because, in addition to insulin processing, the PC1/3 enzyme is also responsible for the production and activation of other hormones involved in eating behaviour.

Changes in the activity of the PC1/3 enzyme can affect how well we produce and secrete insulin in response to rises in blood glucose levels.

The PCSK1 gene encodes the PC1/3 (prohormone convertase 1/3) enzyme that is responsible for insulin processing.

Variants of the PCSK1 gene can affect the activity of the PC1/3 enzyme and, in turn, affect the efficiency of insulin processing/maturation.

A SNP (Single Nucleotide Polymorphism), denoted rs6232, causes an A --> G change in the DNA code of the PCSK1 enzyme. This creates two different PCSK1 variants or ‘alleles’ – the ‘A’ allele and the ‘G’ allele.

On this note, some studies have found that ‘G’ allele carriers have higher levels of proinsulin (and higher proinsulin : insulin ratios) in response to rises in blood glucose.

But, what are the consequences of poorer insulin processing?

Studies suggest that higher proinsulin levels, which are a marker of poorer insulin processing, predict worsening of high blood glucose levels (hyperglycaemia) and the development of Type II diabetes. Although there is a paucity of evidence to link the ‘G’ allele (rs6232) of the PCSK1 gene directly to an increased risk of Type II diabetes, some studies show this allele is associated with a greater waist circumference and waist-to-hip ratio, both of which are risk factors for Type II diabetes. The Forest plot above, for example, illustrates the association of the ‘G’ allele with increased waist-to-hip ratio from a meta-analysis encompassing 27,786 individuals.

Nevertheless, despite the negative impact of the ‘G’ allele on insulin processing, it is difficult to predict the effect of this allele on overall blood sugar control and risk of Type II diabetes. The picture is complicated, partly because there is evidence that the ‘G’ allele is also linked to greater insulin sensitivity and lower (healthier) fasting glucose levels (discussed in the next section).

Insulin sensitivity refers to how well your cells respond to insulin.

As mentioned earlier, insulin is a hormone that allows tissues (e.g. liver, skeletal muscle) to take up and use glucose from the bloodstream. Poor insulin sensitivity therefore refers to an impaired ability of these tissues to take up glucose in response to insulin release, which, in turn, leads to higher blood glucose levels.

One of the experimental techniques used to measure insulin sensitivity is the “glucose clamp” method. In basic terms, this involves infusing both insulin and glucose into the bloodstream to achieve a steady-state, whereby the rate of glucose infused is equal to the amount of glucose taken up by tissues. A greater amount of insulin needed to achieve a steady-state (or a higher steady-state blood glucose concentration) is suggestive of poorer insulin sensitivity. Using the aforementioned clamp technique, a study of 512 German subjects found that carriers ‘G’ allele of the PCSK1 allele had higher (i.e. better) insulin sensitivity. Similarly, as illustrated in the graphs below, they also had lower glucose levels 120 minutes after ingesting a glucose dose and lower HOMA-IR (Homeostatic Model Assessment for Insulin Resistance) scores – both markers of greater insulin sensitivity.

The dual findings in G-allele carriers of greater insulin sensitivity (which is protective against Type II diabetes) and impaired insulin processing / higher proinsulin levels (which may increase the risk of Type II diabetes) seem difficult to reconcile.

As the PC1/3 enzyme acts on multiple precursor molecules (not just proinsulin), it is possible that the lower PC1/3 activity (as conferred by the ‘G’ allele of the PCSK1 gene) also affects other molecules related to insulin function, thereby increasing insulin sensitivity.

Furthermore, given the association of the ‘G’ allele with obesity (see the PCSK1 and overeating blog) and higher waist circumference, researchers have proposed that the ‘G’ allele may promote a form of metabolically healthy obesity, characterised by obesity with normal insulin sensitivity. Further research is needed to establish this.

Your Insulin processing (PCSK1) trait looks at variants of your PCSK1 gene created by the rs6232 SNP. Depending on your DNA results, you will be classified into one of three groups:

To find our your result, please login to truefeed.