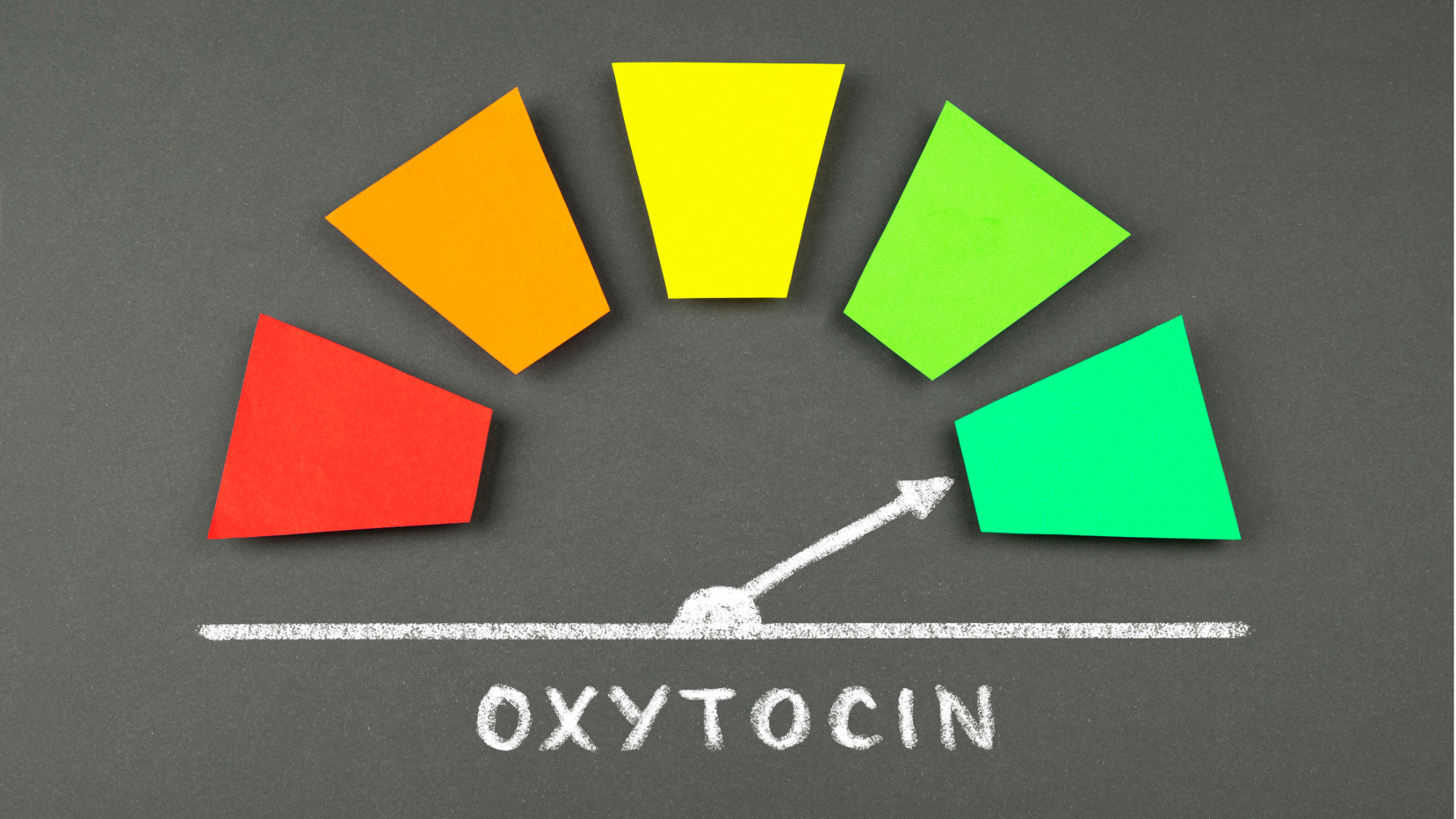 Oxytocin is a hormone and neurotransmitter (nerve-signalling molecule) that is produced by part of the brain called the hypothalamus.

Oxytocin has various effects in the body, with well-defined roles in childbirth and lactation. Specifically, during labour, oxytocin stimulates contraction of uterine muscles. During breastfeeding, oxytocin is released when a baby sucks at the mother’s breast, which triggers the secretion of breast milk. You may have also heard of oxytocin described as the “love hormone”. This is because it plays a role in various social interactions, including mother-infant attachment, pair-bonding, empathy, trust, and social reward. For example, studies suggest that levels of oxytocin rise during male and female orgasm, and that it enhances activity in the brain’s reward system when a person views the face of their partner.

Oxytocin is also shown to regulate eating behaviour, fat and sugar metabolism, and energy balance. As we’ll discuss in the following section, various studies demonstrate that enhanced oxytocin activity in the brain acts to suppress food intake. This effect may be partly due to the influence of oxytocin on brain networks that process the rewarding and pleasurable aspects of food.

What is the oxytocin receptor?

When oxytocin binds to and activates the oxytocin receptors on neurons, it changes the activity of those neurons and associated brain networks. By altering neural activity in networks that affect food intake and reward, oxytocin can modify eating behaviour.

The oxytocin receptor is coded for by your OXTR gene.

How does oxytocin affect eating behaviour?

Oxytocin is thought to act as a conditional anorexigen – it suppresses appetite and food intake, but its precise effects on eating behaviour depend on factors such as individual physiological state, social settings etc.

On this note, studies of both animals and humans have shown that administering doses of oxytocin reduces calorie intake, with pronounced reductions in carbohydrate, sugar, and fat intake.

For example, one small clinical trial administered 25 men either a single-dose of oxytocin or a placebo via a nasal spray. 15 minutes afterwards, the subjects were offered a menu and instructed to order whatever amount of food they could eat. Although both groups ordered similar quantities of food, subjects receiving oxytocin consumed about 122 kcals less food compared to the placebo group. Furthermore, the greatest reduction was in fat intake. This is illustrated in the graph below. As previously mentioned, however, the appetite-suppressing effect of oxytocin is likely to depend on both internal physiological and external environmental (including social) states. In pregnant women, for example, gradual rises in oxytocin during second and third trimesters do not seem to curb food intake. In studies of rats, infusions of oxytocin do not suppress food intake if meals are offered in a social setting with other rats.

It isn’t entirely clear how oxytocin activity in the brain and rest of the body acts to reduce appetite and limit food intake. Studies suggest that oxytocin activity in various brain networks serves to suppress reward-driven food intake i.e. the eating of food for its pleasurable effects rather than out of a physiological need for energy. Let’s explain this in further detail.

We all need to eat to survive. Consequently, we’ve evolved various physiological mechanisms that cause us to feel hungry. For instance, when our blood sugar levels fall or when stretch receptors in our stomach tell us that it is empty, we become hungry. Eating in response to these physiological drives for energy is described as hunger-driven food intake.

By contrast, as described in the Dopamine and Impulsive Eating (DRD2) trait article, our brains also have a ‘reward system’ that motivates us to eat. The reward system both mediates the pleasurable experience or ‘liking’ when we eat palatable foods and also attributes an incentive salience or ‘wanting’ that motivates us to obtain these foods. In this respect, it is thought that changes in reward system activity underlie cravings for foods high in sugar and fat. Eating in response to these reward-centre drives is known as hedonic or reward-driven food intake.

Studies have shown that oxytocin administration selectively reduces reward-driven food intake, but not hunger-driven food intake. In one study, subjects were given either intranasal oxytocin or a placebo and then let loose on a breakfast buffet. Afterwards, under the pretext of a snack tasting test, subjects were offered snacks and their snack intake covertly measured.

The researchers found that the oxytocin and placebo groups consumed a similar amount of calories at the breakfast buffet, with no significant differences in self-reported measures of hunger. When it came to snacking, however, those in the oxytocin group ate significantly less snacks, including 25% less chocolate cookies. They did not, however, report any greater feelings of hunger. These findings are illustrated in the graph above.

Part of this effect may be due to the action of oxytocin on the brain’s reward circuitry. Dopaminergic neurons in key parts of the brain’s reward networks, such as the ventral tegmental area (VTA) and nucleus accumbens, have oxytocin receptors. Studies in rats show that when oxytocin binds to these receptors, it reduces activity in the reward system and lowers motivation to obtain palatable food.

Neuroimaging studies also suggest that oxytocin activity may aid “top-down” control of the reward system by higher brain structures, which allows us to resist reward-driven food cravings.  For example, women receiving oxytocin report lower food cravings when presented with images of sweets and desserts and asked to consider the long-term health consequences.

Furthermore, (as illustrated in the fMRI images above) these lower cravings were correlated with greater activity in frontal brain areas such as the prefrontal cortex – areas involved in top-down inhibitory control of the reward system.

What is the oxytocin-deficiency theory of overeating?

In the previous sections, we described how oxytocin activity in the brain acts to supress food intake, in particular reward-driven food intake aimed at obtaining the pleasurable experience of highly palatable food.

Based on these findings, some researchers have hypothesised that naturally lower oxytocin activity within the brain may contribute to compulsive overeating.

The crux of this “oxytocin-deficiency theory” is that due to a combination of genetics, stressful early life experience, and other adverse social factors (e.g. abuse, neglect), some people have intrinsically reduced oxytocin signalling. This leads to impaired suppression of reward-driven food intake, which puts them at greater risk of overeating.

More specifically, this overeating is thought to be directed towards sweet, high-sugar foods that more strongly activate the reward system. Additionally, in what may be described as a vicious cycle, long-term, excessive intake of sweet foods can further impair oxytocin signalling. This, in turn, leads to less suppression of food intake and spirallingly higher consumption of sweet foods. 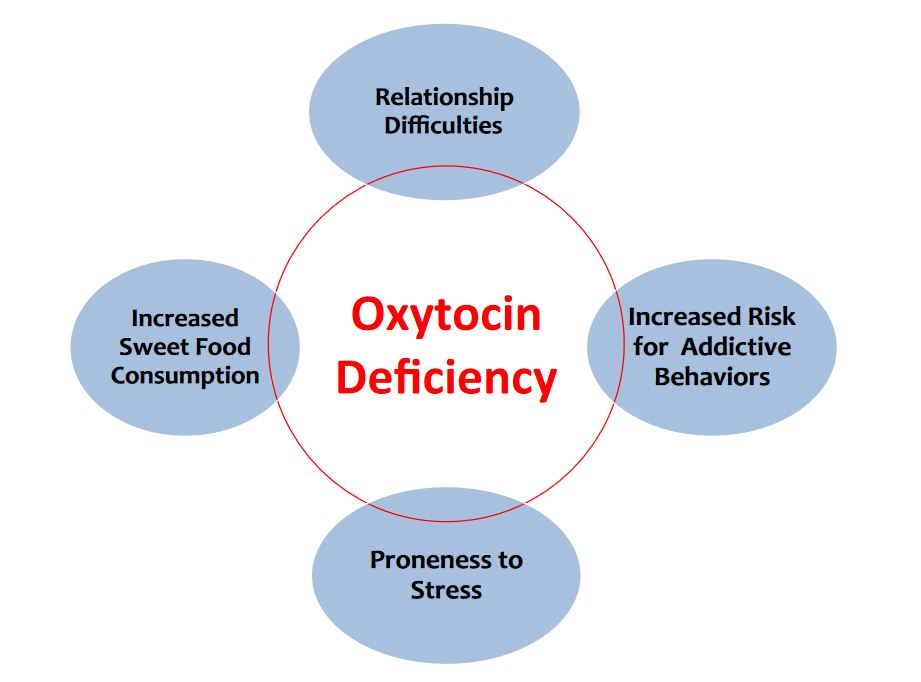 As oxytocin also acts to reduce stress and plays a role in social bonds and social reward, it is also thought that oxytocin deficiency can make an individual more susceptible to stress and relationship difficulties (as illustrated in the above image).

On a related note, it is possible that stressful situations and a lack of social reward (e.g. from social rejection, failure of interpersonal relationships etc) may cause people to overeat high-sugar foods in an attempt to “self-medicate” by stimulating their reward system.

What is the OXTR gene?

As explained previously, when oxytocin binds to the oxytocin receptor on neurons in the brain, it alters neuronal activity. This, in turn, modifies activity in various wider brain networks, which can have broader effects on our behaviour and cognition (how we think, perceive, remember etc.).

On this note, several different variants of the OXTR gene have been linked to differences in brain network activity, behaviour, and cognition. For example, some OXTR gene variants have been associated with reduced activation of the brain’s reward system in anticipation of rewards and may contribute to social impairments in people with autistic spectrum disorders.

In your Oxytocin and Overeating (OXTR) trait, we look at 4 key OXTR variants that have been specifically linked to overeating behaviour. These are described below.

OXTR variants or ‘alleles’ are created by single-letter changes or SNPs (Single Nucleotide Polymorphisms) in the DNA sequence of the OXTR gene.

Your Oxytocin and Overeating (OXTR) trait looks at the following 4 SNPs and their respective alleles.

The above 4 SNPs lie close to one another on the genome, meaning their respective alleles are often inherited together (coinherited). (In technical terms, we say the SNPs are in strong linkage disequilibrium).

As we’ll elaborate upon in the following section, this G-T-A-G haplotype has been linked a preference for high-sugar and high-fat foods, and inheriting this haplotype may increase susceptibility to overeating.

Certain OXTR gene variants (outlined in the previous section) have been linked to a higher risk of overeating, in particular, the overconsumption of palatable foods that are high in sugar and fat.

In one study, researchers genotyped and then surveyed the eating habits of 406 subjects. To assess overeating, they gave subjects questionnaires that enquired about:

The researchers found that those with two copies of the ‘T’ allele (rs2268493) of the OXTR gene had significantly higher scores for overeating compared to those with CC and CT genotypes.

Endophenotypes are robust biological, psychological, or behavioural traits that have a strong genetic underpinning and contribute to a disease or complex pattern of behaviours. They can be thought of as measurable intermediate factors along the pathway from genes to illness or complex behaviours.

Furthermore, working memory deficits have a distinct neural substrate (we know the subset of brain networks involved) and are shown to be heritable, with a number of candidate genes identified. Working memory deficit is therefore considered to be an endophenotype for schizophrenia (see diagram below).

With regards to overeating, three endophenotypes that have been identified are:

In the aforementioned study, researchers used well-validated questionnaires to assess these overeating endophenotypes and then investigated how they related to subjects’ OXTR gene variants.

The study found the following associations: In the same study, researchers looked at the effect of the G-T-A-G haplotype on overeating endophenotypes. They found this haplotype was significantly linked to a higher preference for high-sugar and high-fat foods.

The impact of OXTR SNPs on the function of the oxytocin receptor are not well understood. Further research is needed to fully elucidate how OXTR gene variants drive overeating.

According to proponents of the oxytocin-deficiency theory of overeating (outlined earlier), it is thought that some OXTR SNPs act to impair oxytocin-signalling and reduce oxytocin activity in various brain networks.

Reduced oxytocin activity then underlies some of the endophenotypes of overeating. For example, oxytocin normally acts to modulate activity in the brain’s reward system and suppress reward-driven food intake. OXTR gene variants that predispose towards lower oxytocin activity may therefore effect changes in the activity of brain’s reward system that contribute to the endophenotype of higher reward sensitivity. This, in turn, drives overeating and overconsumption of palatable, high-sugar and high-fat foods.

Your Oxytocin and overeating (OXTR) trait

Depending on your DNA results, you will be classified into one of four groups:

To find our your result, please login to truefeed.