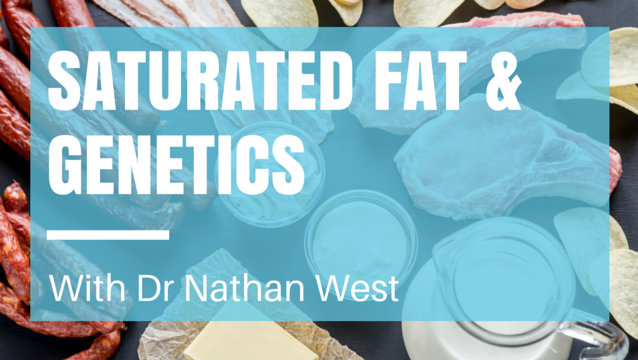 The main source of dietary fat comes in the form of molecules known as triglycerides.  Many of you would have heard of these as medical professionals often measure triglyceride levels in the blood.  High blood triglycerides have been linked to cardiovascular disease (CVD) and also poor metabolic health (insulin resistance, high blood glucose, unhealthy lipid profile (cholesterol and triglycerides), high blood pressure etc.).  Fat inside adipocytes (fat cells) is normally stored as triglycerides.  Fat stores in both animals and plant are mainly composed of triglycerides as well.

A Triglyceride Molecule, made up of one Glycerol compound and 3 fatty acid chains.

How is this relevant to food?

The different fatty acids all are thought to have differing effects in terms of human health.  In the following paragraphs we’re going to focus on SFA, the food sources that contain high levels of SFA and identify which genes can influence how much saturated fat you should be consuming

Generally, most animal fats are high in SFA (excluding fish) but this can vary between different animals. Dairy products such as cream, cheese, butter and whole milk products are high in SFA. Also processed food such as sausages, pizza and many desserts (chocolate, cakes, pastries & biscuits) are normally high in SFA.

SFA are by far the most demonized dietary fatty acid and the one most nutritional guidelines recommend that we reduce in our diets due to its possible association with CVD. Current guidelines suggest that we should consume no more than 10% of our daily calories from SFA. That said, there is still an on going debate between scientists as to whether SFA is as bad for us as some of the research has suggested. It can be argued that factors including your current health (body weight, metabolic health, CVD risk), diet (e.g. unbalanced and poor vs. balanced and good), activity levels (very active vs. not active) and genetics (FTO & APOA2) have an effect on how much SFA you can tolerate without increasing your CVD risk.

Saturated fats in the context of your health and lifestyle

Searching for saturated fat on the internet will bring up thousands of websites that offer conflicting opinions on saturated fats.  Even the scientific literature does not make it clear as you can read papers, systematic reviews and meta-analyses which show positive, inconclusive, no association or even a negative association between saturated fat and CVD.

On the whole, there does seem to be a small association between SFA and CVD but this does not indicate a causal relationship.  It is possible that high SFA intake is adding to a person's risk of CVD but only if they are already at an increased risk.  However, most doctors would agree that if you are obese or overweight and/or metabolically unhealthy (any or all of the following – insulin resistant, unhealthy lipid profile, high blood pressure, high blood glucose, fatty liver etc.) it would be sensible to limit the amount of saturated fat in your diet to 10% or less

If you are lean, very physically active, metabolically healthy and follow a good diet, then there is probably no need to drastically limit your SFA intake. One exception of this may be if there is a strong history of CVD in your family.

One of the possible reasons that research into the health effects of SFA have produced conflicting reports could be due to the fact that the total SFA content in foods is actually comprised of different types of SFA, such as:

Many studies that show an association or don't show an association between SFA and CVD tend to only look at the effect of total SFA intake and do not look at the effect of individual SFA's. The main reason for this is because it is incredibly difficult to find out the breakdown of an individual's SFA intake. However, just as different PUFA's (omega-6 and omega-3) are thought to have different health effects, it is also likely that different SFA's will also have different effects but more research is needed to confirm them.

So what does this all mean for you? Since more research is needed and since you probably aren't going to be able to find out the SFA breakdown of most of your foods, you should concentrate on the simple advice we have already given you and the recommendations from the gene reports we give to customers.

Some of the gene results we give you also have more information on whether you need to restrict your SFA intake. This includes our one of our latest gene releases, APOA2, and below is a summary of this gene.

Research into APOA2, one of the latest genes released by FitnessGenes, has demonstrated over several studies that there is an association between different genotypes and their response to SFA intake.

Of the three variations of this gene (GG, AG, AA), individuals with the GG variation have been continuously found to have an increased BMI when consuming more than 22g of SFA per day. One study, carried out in 2015, found that GG subjects with high saturated fat intake had higher weight and BMI than A allele carriers who consumed the same amount of SFA. However, there was no difference in BMI and weight between genotypes on a low saturated fat diet (less than 22g per day) once adjustments for age, gender, tobacco, smoking, physical activity and total energy intake were made.

It is important to note that although BMI is used frequently in studies as a measure of obesity risk, it is not the most accurate body composition indicator. A higher BMI does not necessarily indicate a higher percentage of body fat or poorer health