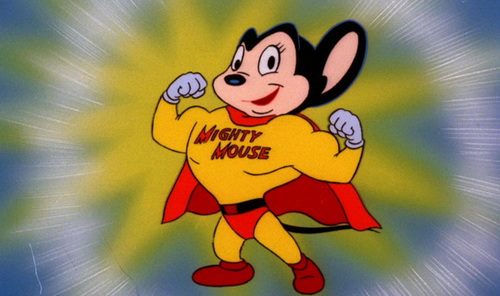 Well actually, Mighty Mouse was genetically created by Professor Richard Hanson in Cleveland a few years ago! Professor Hanson studied the role of the cytosolic form of phosphoenolpyruvate carboxykinase (PEPCK-C) in skeletal muscle. PEPCK-Cmus mice were created by introducing the cDNA for the enzyme, linked to the human alpha-skeletal actin gene promoter, into their germ line. Two founder lines generated by this procedure were bred together, creating a line of mice that have 9.0 units/g skeletal muscle of PEPCK-C, as compared to 0.080 units/g in muscle from control animals. The mice were more active than controls in their cages and could run for up to 5 km, at a speed of 20 m/min without stopping (control mice run for 0.2 km at the same speed).

Male PEPCK-Cmus mice are extremely aggressive, as well as hyperactive. During strenuous exercise, they use fatty acids as a fuel more efficiently than do controls and produce far less lactate than do control animals, perhaps due to the greatly increased number of mitochondria in their skeletal muscle. PEPCK-Cmus mice also store up to five-times more triglyceride in their skeletal muscle, but have only marginal amounts of triglyceride in their adipose tissue depots, despite eating 60% more than controls.

The concentration of leptin and insulin in the blood of 8–12 months of PEPCK-Cmus mice is far lower than noted in the blood of control animals of the same age. These mice live longer than controls and the females remain reproductively active for as long as 35 months.

Watch the video to see for yourself what these mighty mouse are capable of on a treadmill!

Mighty Mouse on the treadmill