Leptin is a hormone secreted by our fat cells (adipocytes).

It plays a major role in our energy balance and regulation of bodyweight.

Leptin’s main function is to signal how much chemical energy we have stored as fat (adipose) tissue. This allows the brain to correspondingly alter how much energy we take in (via food) and expend on processes that are not needed for immediate survival (e.g. growth, reproduction, tissue remodelling).

The more fat (adipose) tissue we carry, the more leptin we produce. When leptin acts on the brain, it suppresses our appetite (thereby reducing food/energy intake) and causes greater energy expenditure (for example, by increasing the amount of calories we burn and lose as heat energy). Disruption to the function of leptin is associated with weight gain and obesity.

As well as acting as a hormone that regulates energy balance, leptin causes inflammation. In this sense, we can also describe leptin as a pro-inflammatory cytokine (cell signalling molecule). In scientific terms, we classify leptin as an adipokine – it is a cytokine secreted by adipose (fat) tissue.

What does leptin do?

Despite large fluctuations in the amount of food we eat and energy we expend, our bodyweight actually remains relatively stable over time. (Incidentally, this is partly why people struggle to maintain weight-loss and often end up regaining lost weight.)

This is because our energy balance and, by extension, our bodyweight, are regulated around a ‘set-point’ by a process of homeostasis. Homeostasis refers to the maintenance of a constant internal environment. Leptin plays a key role in energy homeostasis: it maintains a fine balance between the energy we get from our diet versus the energy we spend on all the processes we need to survive.

In the same way a house may have a thermostat that controls room temperature, our bodies have an in-built ‘lipostat’ that regulates the amount of energy we store in the form of fat (adipose) tissue. Leptin acts as the main feedback signal for this lipostat.

When our total energy intake exceeds our total energy expenditure, some of this excess energy is stored as fat tissue (therefore causing us to gain weight). It’s the old “calories-in versus calories-out” adage. If this situation continued unopposed, however, it would soon put our energy balance out of kilter and take our bodyweight further away from its set point.

To counteract this, our adipocytes (fat cells) secrete leptin. Leptin signals to the brain that we have an abundance of excess energy stores. It also orchestrates a reduction in energy / food intake and an increase in energy expenditure, which allows our body to correct its energy balance and bring our bodyweight back towards its set point. This is a prime example in physiology of a negative feedback cycle.

In evolutionary terms, this negative feedback cycle using leptin would have been advantageous. During periods where we had an abundance of food, leptin would allow us to divert additional energy to other important processes, including tissue remodelling and reproduction, rather than continuing to build excess energy stores as fat tissue. Leptin acts on structures within the brain to suppress appetite and thereby reduce food intake. It does this in various ways, including:

Leptin also increases the amount of energy we expend through various metabolic processes. For example, leptin increases the rate at which we convert chemical energy into heat energy. This process is known as thermogenesis.

When sympathetic nerves supplying brown adipose tissue are stimulated by leptin, brown adipocytes (fat cells) increase their rate of heat production and a greater proportion of chemical energy from food is lost as heat energy.

Our sympathetic nervous system also regulates our cardiovascular system. By activating the SNS, leptin increases our heart rate and blood pressure. When our heart pumps at a faster rate, it uses more energy. In this way, leptin increases energy expenditure. 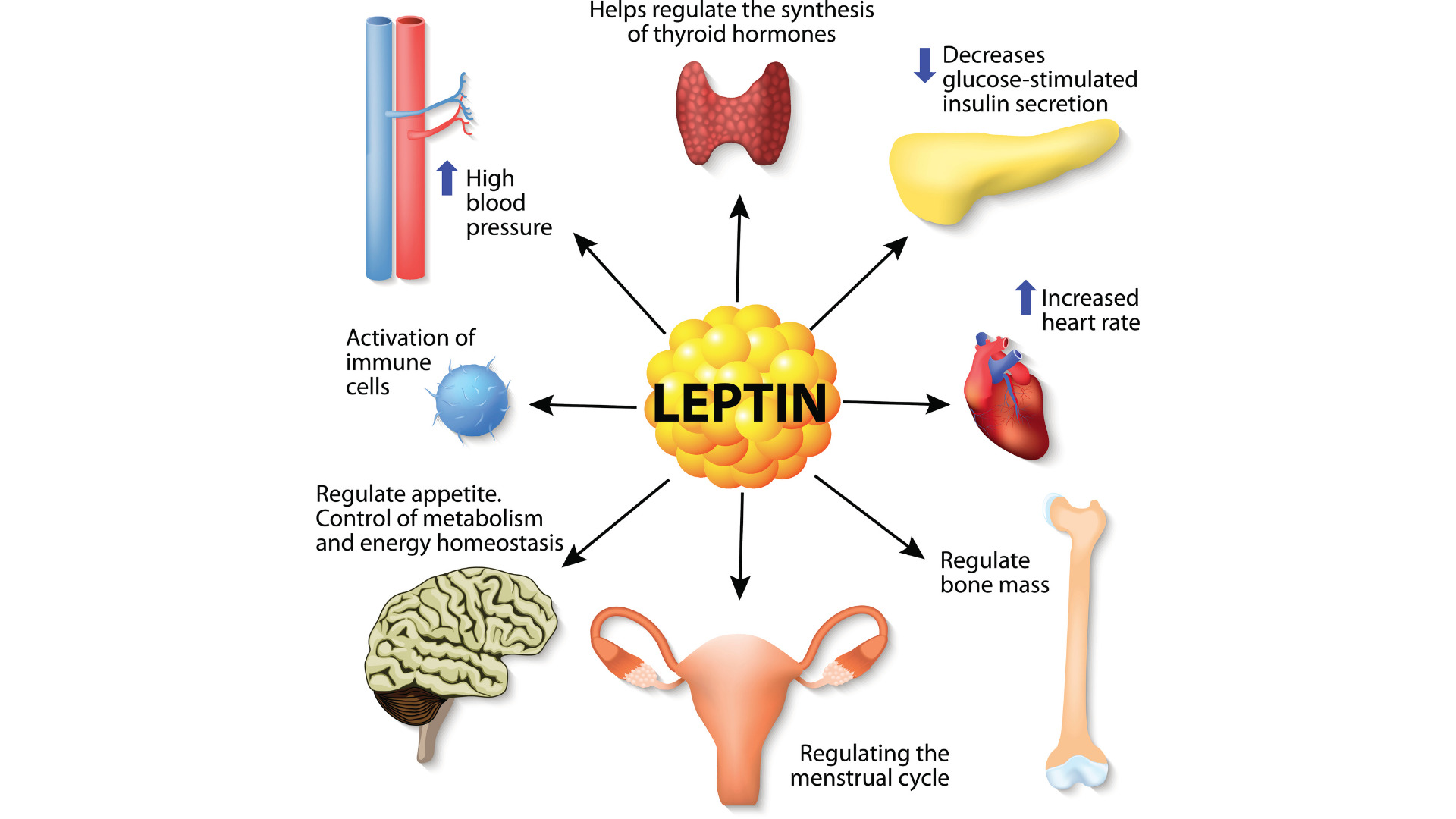 How does leptin work?

- Leptin binds to leptin receptors (LEPRs) in the brain

Many of leptin’s effects on energy balance result from its actions in the brain, particularly a structure called the hypothalamus.

Your hypothalamus is a key control center for homeostasis – the maintenance of a stable internal environment in your body. Broadly speaking, your hypothalamus regulates things like body temperature, blood volume and energy balance by coordinating activity in your endocrine system (i.e. your network of glands and hormones) with that of your brain and nervous system.

On a similar note, when leptin is secreted by fat cells (adipocytes), it travels in the bloodstream towards the brain. It is then transported across a protective membrane that surrounds the brain (called the blood-brain-barrier), where it binds to leptin receptors (LEPRs) in various brain circuits. There are different forms of leptin receptor, but arguably the most important is the LEPRb receptor.

You hypothalamus is particularly rich in leptin (LEPRb) receptors, with a high concentration in an area called the arcuate nucleus.

When leptin binds to a specific group of neurons (nerve cells) in the arcuate nucleus, it stimulates the production of a protein called POMC (propriomelanocortin). This is then converted into another nerve-signalling molecule (or neuropeptide) called α-MSH (alpha-melanocyte stimulating hormone).

α-MSH is an anorexigenic substance – it suppresses appetite. By acting on neurons in wider brain circuits that control feeding, α-MSH reduces appetite. More precisely, the appetite-supressing effect of α-MSH occurs when it binds to specialized melanocortin receptors (including MC3R and MC4R receptors) on neurons.

In addition to enhancing the activity of appetite-supressing brain circuits, leptin inhibits the activity of brain circuits that stimulate appetite. Again, the arcuate nucleus of your hypothalamus plays a key role here. A different group of neurons in the arcuate nucleus make two orexigenic (appetite-stimulating) signalling molecules: AgRP (Agouti-related Peptide) and NPY (Neuropeptide Y). When leptin to binds to leptin receptors (LRs) in the arcuate nucleus, it inhibits the production of AgRP and NPY, and therefore prevents your appetite from being stimulated.

A model of a hypothalamus in a rat (which is similar to brain circuits in humans). Leptin acts on neurons in the arcuate nucleus (Arc) to stimulate the production of POMC and a-MSH but inhibit the production AgRP. This suppresses food intake but increases energy expenditure (e.g. through heat production, heart activity).

What is leptin resistance?

Recall that leptin is produced by fat cells, and the more fat tissue you have, the more the leptin you produce. Therefore, an obese individual (who has excessive amount of fat tissue) ought to produce more leptin compared to a lean individual.

You may also remember, however, that leptin acts to reduce food intake and increase energy expenditure.

So, shouldn’t obese individuals, who have higher circulating levels of leptin, have a lower appetite and increased energy expenditure, which would lead to weight loss?

Moreover, how does one become obese in the first place? As soon as you initially accumulate fat tissue, shouldn’t leptin levels quickly rise and prevent further fat / weight gain? How can we reconcile this apparent discrepancy?

The answer is leptin resistance.

Studies show overweight and obese individuals may be irresponsive or ‘resistant’ to the effects of leptin. Under this theory, people with obesity do have high levels of leptin circulating in their bloodstream, but their brain and other tissues do not adequately suppress appetite or increase energy expenditure in response to leptin.

Generally speaking, having a greater degree of leptin resistance increases your risk of gaining fat.

Scientists are still trying to figure out what exactly causes leptin to have diminished effects in the body. To date, there have been several proposed mechanisms for leptin resistance, including:

- Impaired transport of leptin to the brain

As mentioned in the “How does leptin work?” section, leptin must be transported from the bloodstream across a protective membrane called the blood-brain-barrier (BBB) before it can act directly on neurons within the brain. Two forms of leptin receptor are responsible for the transport of leptin, LEPRa and LEPRb.

It is thought that leptin resistance may result from defects in this transport process. This would mean that, despite circulating at high levels in the bloodstream, leptin cannot enter and regulate activity in the hypothalamus and other brain structures.

Leptin exerts its effects on food intake, energy expenditure and energy balance by binding to leptin receptors (in particular, the LEPRb receptor) on various cells, including neurons in the brain. If, however, these cells have or ‘express’ fewer LEPRb receptors, they will be less sensitive to the effects of leptin. On this note, reduced expression of LEPRb receptors is thought to be a potential cause of leptin resistance.

When leptin binds to the LEPRb receptor, it triggers a cascade of chemical reactions which go on to change activity in various metabolic pathways. Several other proteins can also modify the activity in these pathways. We refer to this complex cascade of reactions as leptin receptor signalling.

Leptin modifies the activity of wider circuits in the brain. For example, in the “How does leptin work?” section, we learned that leptin targets and stimulates brain circuits which suppress appetite. These circuits rely on a-MSH and MC4R receptors as signalling proteins. Studies have shown that defects in these target circuits (e.g. a deficiency of MC4R receptors) may prevent leptin from working effectively and are associated with obesity.

Mutations of leptin-related genes can directly cause obesity in humans, but these mutations are extremely rare.

For example, a rare mutation of the LEPR gene, which encodes the leptin receptor, causes a condition called (Congenital) Leptin Receptor Deficiency. As the name suggests, individuals with this condition do not produce the leptin receptor and are therefore completely insensitive to leptin. Although normal weight at birth, individuals with Leptin Receptor Deficiency quickly become extremely obese within the first few months of life and show excessive eating behaviour (termed ‘hyperphagia’). They also have problems with sexual development and fertility.

Note: FitnessGenes do not test for these rare mutations.

At FitnessGenes, we test for more common gene variants or single nucleotide polymorphisms (SNPs). By definition, these gene variants (SNPs) are present in over 1% of the population.

On this note, one common variant of the LEPR gene has been associated with leptin resistance and an increased risk of obesity. It is thought that this gene variant causes lower expression of LEPRb receptors, and therefore lower sensitivity of tissues to the effects of leptin.

Another gene that affects leptin-signalling is your CRP gene. This gene encodes a protein called C-reactive protein (CRP), which plays a role in inflammation. It is possible that increased levels of CRP in the bloodstream can disrupt the pathways involved in leptin-receptor signalling, thereby increasing your risk of leptin resistance.

To read more about your Leptin Resistance trait, login to your Member's Area or create your FREE FitnessGenes account to access all of the blogs and videos on truefeed®.