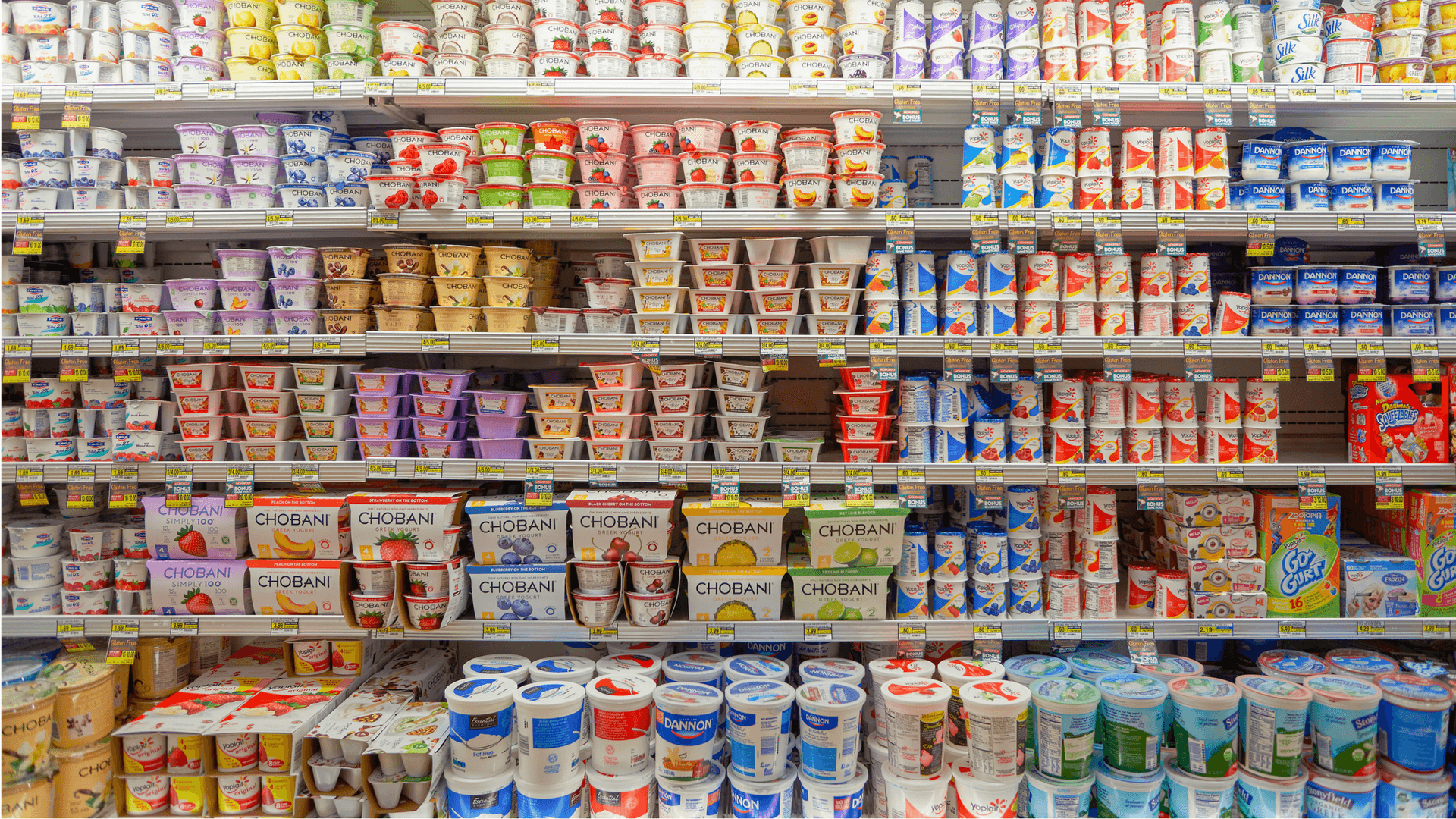 There are also numerous reasons not to eat dairy at all and find other ways of satisfying your creamy, milky desires.  Some of these reasons are down to personal dietary preferences or the perception that “fat is bad”, and other reasons may of course be genetic or medical.  Before we delve too deeply into the “Philosophy of Yogurt Preferences”, let’s take a quick look at what yogurt is, and why it is generally a good idea to eat some form of it on a regular basis.

Yogurt is an ancient cultured, fermented “milk” product, most commonly made from cow’s milk, and most commonly attributed to the ancient Greeks, who among other amazing feats of engineering, figured out how to preserve milk via fermentation.  In its natural state, yogurt has a rather sharp, tangy flavor and is fermented with “good bacteria”, commonly and collectively known as cultures or probiotics.

Probiotics and  “good gut bacteria” are a story for another day, but the simple explanation is:  a) you have billions of bacterial cells in your gut and it is important to keep the balance of power in favor of the good gut bacteria, otherwise you may suffer from all sorts of health issues that are “unrelated” to the gut itself. b) It is now widely accepted that your immune system is related to and directly connected with your gut health, so a bad bacterial balance in the gut may manifest itself not only as a digestive disorder but as any number of other inflammatory conditions ranging from acne to eczema, to high blood pressure and heart disease, to rheumatoid arthritis  c) Due to the presence of probiotics in the yogurt, and the fact that yogurt has been fermented (essentially meaning that it is partially pre-digested and therefore easier on your guts), yogurt…..and all fermented foods, and all probiotic foods are generally considered “a good thing” to include into your meal plans because of their positive impact on your gut bacteria and your overall well being.

Of course, at FitnessGenes, we do not deal in “generics and generalizations”, rather we offer precise, personalized nutrition advice based on your genes and lifestyle data, but in the broadest possible nutritional terms, an all-natural, unsweetened probiotic yogurt is generally a good thing, whereas a box of cream-filled glazed donuts with sprinkles  is generally a bad thing.

If we can agree on that, let’s transport ourselves to your local supermarket and now we’re staring at a bewildering array of yogurts.  I live in a small town of 15,000 people, and even my local supermarket has a choice of over 50 types of yogurt, while the online extension of the same supermarket has 244 yogurt products:  different flavors, different textures, different packaging formats,  low-fat, full-fat, naturally sweetened, artificially sweetened, unsweetened, organic/non-organic, cow’s milk, goat’s milk, soy milk, coconut milk, and even cashew yogurt.

There are way too many choices, so let’s eliminate a giant swathe of them to make the selection process more manageable.

Don’t eat:  Any of the yogurts that are flavored or sweetened.  Why?  Most of them are loaded with added sugar.  Why?  Because as I mentioned earlier, yogurt’s natural, fermented flavor is sharp and tangy, and in some cases, it can even be a bit “cheesy” if it's fermented for a longer period of time.  Therefore in an effort to make the flavor more palatable to a wider audience, your obesity causing friends at “Big Food Inc” load up the yogurt with sugars, and stabilizers, and all sorts of other junk and then try to sell it to you as a “healthy food”.  Don’t buy it….either literally or figuratively.  If you don’t like the “natural” flavor of yogurt, follow Leilah’s Magic Mango Muesli recipe and add your own sweetener to the Greek yogurt in the form of fresh or dried fruit, maple syrup, or a nice local honey from your local farmer’s market or healthy foods store.

Greek yogurt is simply a style of yogurt popularized in Greece and exported around the world...and for good reason.  It’s delicious AND normally is higher in protein and lower in lactose, so it’s a winner on all fronts.  It tends to be thicker in consistency because all of the liquid whey has been strained out, and has more of a “set” consistency, rather than a runny one.  There are flavored and unflavored Greek yogurts, and as before, we recommend the unflavored, natural ones.

I’ll skip the debate on organic vs non-organic milk and move right into the full-fat vs low-fat argument.  The short story here is:  Whole milk contains a reasonably high percentage of fat, the majority of which is saturated.  A gram of fat has more calories than a gram of carbs or protein, so from a purely mathematical perspective, reducing fat reduces calories.  It will also reduce flavor and texture as one of the reasons dairy products in general taste so good is they’re high in fat, which is both pleasing to the palate and feels nice in your mouth. In a story that is probably familiar to us all,  back in the 1970’s the erroneous advice was “dietary fat makes you fat, clogs your arteries, and is unhealthy”, so Big Food launched the low-fat diet craze.

As we all now know, by reducing the fat content and therefore reducing the flavor, Big Food replaced naturally occurring dietary fat with lots of sugars and stabilizers to re-create a palatable flavor profile…..and this became a major contributing factor to the obesity crisis.  Of course, there are some perfectly fine low-fat choices in your supermarkets, and for some people, based on their genes and their lifestyle, reducing fat intake IS a good idea.  In the cases where low-fat makes sense, please buy the natural flavor and check that the yogurt hasn’t been jacked up with tons of sugar and various gums that are used as thickeners and emulsifiers.

The full-fat yogurts naturally taste better and are less processed.  If that alone wasn’t a reason a buy them, the dietary fats found in many dairy products are rather nutritious, have numerous health and hormonal benefits, can increase satiety levels and therefore can actually contribute to weight loss.  Besides reading this informative article on Saturated fats and genetics,  the best way to find out about whether you should be eating more or less full-fat dairy depends on your genes and your lifestyle, so we’d recommend taking a DNA Analysis so you know for sure.

Your DNA analysis also covers the LCT gene, which will tell you whether you are genetically lactose intolerant or not.  Many people who are lactose intolerant and who can’t drink milk or eat ice cream CAN eat yogurt in moderation.  This is because fermented dairy products are essentially partially pre-digested foods, and the good bacteria in the yogurt feeds off the lactose (thereby reducing its presence).  Also, many probiotic strains of bacteria added into the yogurt culture can help ease gastric bloating.

There are also lactose-free yogurts, and yes, you can get all-natural, lactose-free, Greek yogurt.  Lactose-free yogurts simply have the lactase enzyme added to them, which “digests” the lactose in the yogurt and should hopefully solve the problem (if you have one).  Unfortunately, lactose free yogurts never taste like their unaltered counterparts, and generally lack the overall richness of flavor and texture.  Of course, for many people, lactose (the carbohydrate component of milk) isn’t the problem.  Many people can’t eat cow’s milk products because of the allergens in the milk protein.  In this case, it’s on to other sources, whether it’s goat’s or sheep’s milk yogurts (which may or may not be easier for some people to digest), or soya milk yogurt, or coconut milk or even nut-based yogurts.

Soy milk products including soya yogurt are a staple for the non-dairy crowd.  Given the range of producers, you can probably find one that suits your palate.  Soy milk has a very good nutritional profile, with the only potential concern being the high levels of GMO soy (if that bothers you).  I will also save the debate on whether soya raises estrogen levels for another day.

Coconut milk yogurt is rapidly gaining popularity as another non-dairy alternative to soy milk.  Coconut yogurts also come in a range of flavors including “natural”.  They do have a nice creamy consistency and a satisfying richness,  but a bit of experimentation may be required to find one that doesn’t taste like sunscreen.  The other potential issue with coconut yogurt is its high level of saturated fats, which from a genetic and dietary perspective, may or may not be an issue in your individual case.

Depending on where you live and the range of stores to which you have access, you may be able to find nut-based yogurts, usually from cashews or almonds.  Obviously, these will taste completely different to a dairy or a coconut based yogurt, but if you can find an unsweetened nut yogurt without a lot of added gums or sweeteners, they are definitely worth a try.  Nuts in general are nutritional powerhouses, loaded with protein, healthy fats and lots of minerals and antioxidants, so if you can find a nut-based yogurt with no nasties, and you like the taste….you’re onto a good thing.  (NB:  Our lawyers insist that I remind you that nut yogurts contain nuts...so if you have a nut allergy, please don’t eat nut based yogurts or any other nut-related products or the nuts themselves. Thank you.)

If you enjoyed this article, please check out my other FitnessGenes food blogs:

Out of the kitchen, I also cover the following topics for FitnessGenes: