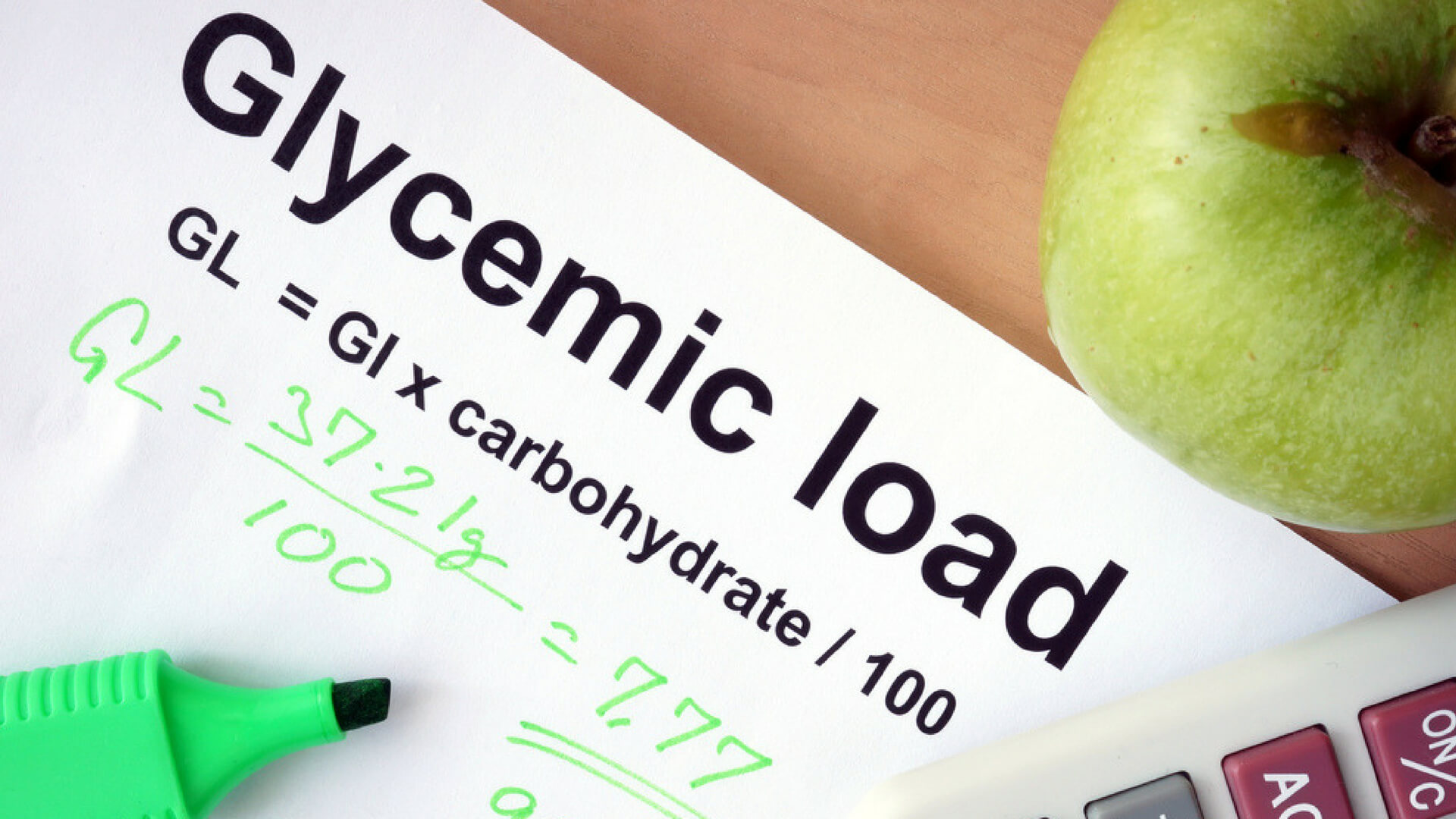 You may be familiar with the terms glycemic load and glycemic index, but do you know the difference between the two, or why we should be paying attention to them?

Similarly, ‘Low-GI' and ‘low-GL' foods are often recommended as part of healthy diets, but why exactly are they better for you? For this blog post, we will delve into all things glycemic in an attempt to clear up these terms.

What is the Glycemic Index?

The Glycemic Index (GI) rates carbohydrate-containing foods from 0-100 depending on how quickly the food is digested and absorbed in our bodies and the extent to which the food causes fluctuations in our blood glucose (sugar) levels. High, moderate and low GI foods are generally considered to have GI ratings of >70, 56-69 and ≤55 respectively. For example, white bread has a high glycemic index of 75 because it is quickly digested and causes a rapid increase in blood sugar levels. By contrast, soya beans have a low glycemic index of 16 as they cause only gradual rises in blood glucose levels. A portion of pure glucose has the highest glycemic index possible, 100.

What is Glycemic Load?

If you know a food's GI and the amount of carbohydrate that it contains, you can also calculate the  Glycemic Load (GL) of a food. This takes into account how much carbohydrate is in a given food, which is useful because fat, fiber and protein will have minimal effects on blood glucose concentration compared to carbohydrates. Some foods, including lots of fruit and vegetables, have a high GI, but actually have little impact on blood glucose levels due to the small amount of carbohydrate they contain. GL can be banded as such: low (0-10), moderate (11-19) and high (20+). The equation below shows how GL can be calculated.

Here are some examples of low, moderate and high GL foods, I think you'll be surprised at how high the GL of some everyday foods are!

Now that we know our GIs from our GLs, it's time to consider why this all matters to us.

First of all, eating a meal which has a high GL can cause significant spikes in blood glucose (hyperglycemia) as the food is digested rapidly after ingestion. On the other hand, low GL foods have a steadier rise and fall, as we can see from the graph below. 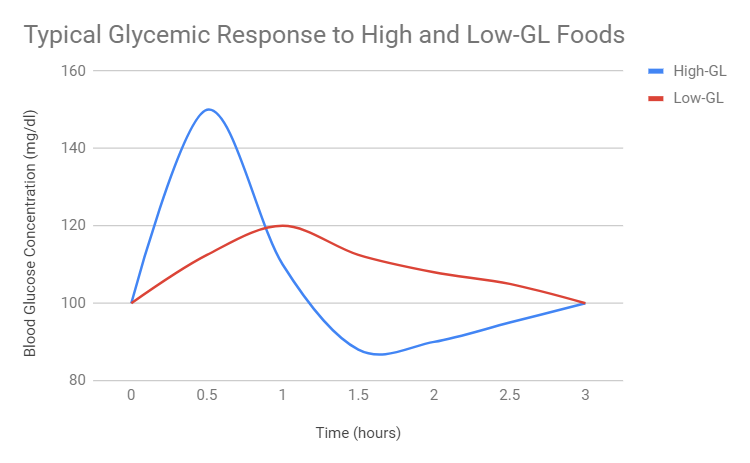 As the saying goes, what goes up must come down… We've all experienced it; the "crash" (technical name: postprandial hypoglycemia) that shortly follows consuming a particularly indulgent, high-GL meal. These feelings of sluggishness and lethargy are actually due to a sharp decline in blood sugar, as glucose is used as fuel by cells. Less fuel means less energy production, hence the tiredness!

A rise in blood glucose, such as that from a high-GL, triggers the release of a hormone called insulin.  Insulin, which is secreted by a gland called the pancreas, allows glucose from the bloodstream to be taken up and used by various tissues. For example, it can be stored as glycogen in the liver or skeletal muscle for later use. Part of a sugar crash is caused by excessive release of insulin, which causes blood sugar levels to fall dramatically.

Unfortunately, if insulin receptors are stimulated frequently and for extended periods of time by the insulin hormone, they become resistant to its effects. Insulin resistance impairs the entry of glucose into cells. In turn, this leads to a drop in communication with the pancreas to tell it to stop producing insulin. Consequently, levels of insulin circulating in the blood continue to rise.

If glucose cannot be stored in the muscle and liver due to insulin resistance, it still needs to be removed from the blood; so insulin removes glucose from the blood in another way, by storing it as fat. However, this does not necessarily mean that insulin makes you fat.  If you consume as much fuel as your body needs, then stored fat will be broken down and used for energy throughout the day.

The issue arises when you consume excessive amounts of food, as not all of the fat stored by insulin is needed to fuel activity. Instead, fat remains in the body as adipose tissue, in the muscles, or surrounding our organs (visceral fat). High GL foods are more likely to trigger excessive insulin production, which, in the longer term, increases your risk of developing insulin resistance. You should therefore aim to consume high GL foods in moderation.

Several genes can affect your insulin function and your response to high-GI and high-GL foods. Two of these genes are SLC3OA8 and PPARG.

The SLC3OA8 gene codes for a zinc transporter which is associated with fasting blood glucose concentrations. Those with the GG or GA genotype are likely to have slightly higher levels of blood glucose when fasting compared to those with the AA genotype. Although this difference is very slight, it can have implications for insulin resistance. If you have a G allele in your DNA results for this gene, it may be worth avoiding high GL foods to avoid spikes in your (possibly already slightly elevated) blood glucose concentration.

The peroxisome proliferator-activated receptor-gamma (PPARG) has been linked to insulin sensitivity and also affects changes in blood sugar levels following bouts of exercise. Carriers of the G allele demonstrate a more significant improvement in glycemic response (that is, how much insulin is released in response to rises in blood glucose) after exercise compared to people with the CC genotype. PPARG alters the expression of genes involved in the removal of glucose from the bloodstream and into cells. It is also known to increase the glucose-sensing ability of pancreatic cells, meaning the production of insulin is better controlled and insulin resistance is less likely to develop.

Again, those with the CC genotype should try to avoid foods that carry a high GL rating as your genes may result in a lower sensitivity to glucose and subsequently reduced glucose clearing capabilities. This means you may be more at risk of storing glucose as fat, which can negatively impact your health and fitness goals.

Protein to the rescue!

We all know the importance of protein in building muscle, but the benefits don't end there! Research suggests that the glycemic response can be attenuated by consuming protein alongside carbohydrate. Therefore, if you know you are going to be eating meals with a high GL, try to incorporate some foods that are high in protein to minimize insulin spikes and reduce the risk of developing insulin resistance.

This database offers information on over 230,000 foods including their glycemic indexes and loads, it can be used to monitor the food you eat to ensure that you are not rocketing your blood glucose and subsequently insulin which, as we now know, can lead to insulin resistance, obesity, and potentially diabetes.

If you need some inspiration for a high-protein, Low-GL meal, why not check out our latest recipe:  Salmon Supergrain Salad!

If you enjoyed reading this, then please check out my recent blog post about The Lactate Threshold!