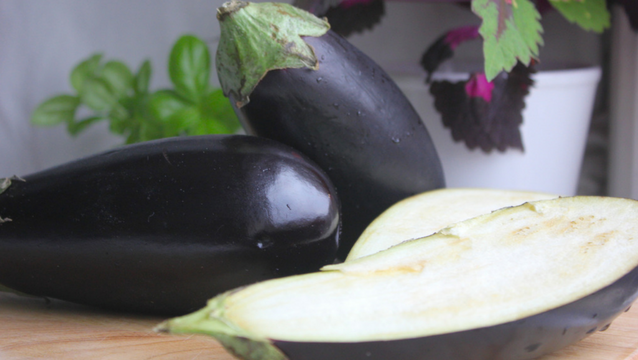 This week’s recipe is lasagne, but not just any lasagne! This lasagne recipe uses eggplant instead of pasta and is therefore more nutritious….and delicious! Check it out here.

Eggplant is ranked as one of the top 6 most highly produced vegetables in the world. Around 80% of the world’s eggplant production area is in China, India, Bangladesh, Nepal and Sri Lanka. They are one of the few plants capable of high levels of growth in very hot and very wet environments.

The most common variety of eggplant, the one you will most likely find at your local grocery store, is purple in color. However, in Southern and Southeastern Asia, the color of eggplant varies greatly, along with large variations in shape and size. It is common to see colors of purple, green, or white in these areas.

Eggplants for your health! What do they having going for them?

One cup, or around 99 grams of eggplant, contains around 9 grams of carbohydrates, 3 grams of fiber, 1 gram of protein and 0.2 grams of fat. All this adds up to about 35 calories! Nutritionally, eggplants contain various forms of Vitamin B, Vitamin K, Potassium, Manganese and Folate.

Now, understanding your genetics can play a key role in knowing if and how you would benefit from the consumption of eggplant. This becomes very relevant when we look at certain genes. Yet to unlock your unique fitness DNA to know which versions you have? Receive full FitnessGenes DNA Analysis and a genetically tailored workout and nutrition plan by purchasing a goal specific Genetic Workout System