If you’re a FitnessGenes customer, you’ll know that one of your Personal Insights concerns your requirement for choline. So, just what is choline, why does your body need it, and where can you get it from?

This article explains everything you need to know.

Choline is a micronutrient that is essential for humans to survive. While it has properties similar to a vitamin, choline is, strictly speaking, classified as a ‘vitamin-like’ compound. This term suggests that, although it is necessary for survival, choline can be produced naturally by the body in adequate amounts.

Nevertheless, studies show that your liver’s production of choline is often insufficient to meet the body’s needs. Humans therefore must obtain choline from the diet.

Why does your body need choline?

Choline plays a number of vital functions in the body, the three major ones being:

Surrounding most cells in the body is a layer of lipids (fats and fat-like substances) which separates the interior of the cell from the outside. This cell membrane is important for maintaining cells’ structure, regulating what passes into and out of the cell, and coordinating communication between cells.

A methyl-group is simply a molecule that contains one carbon atom bonded to three hydrogen atoms. It has the formula -CH3. Methyl groups are typically parts of larger molecules (e.g. choline). In several different chemical reactions in the human body, methyl-groups are often donated from one molecule and attached to another. This process of adding a methyl-group is called ‘methylation.’

Methylation reactions are important because they play an integral role in a variety of broader processes, such as: switching genes on and off (controlling gene expression), repairing cell damage, safely getting rid of toxins, producing energy for cells and making the protective coating (myelin sheath) that surrounds nerve cells.

Given its role in the above three processes, choline is also especially important for brain development, changes in gene expression and fat metabolism.

Choline also plays a key role in the folate and methionine cycles, where it helps to regulate levels of methionine and homocysteine. This is where things start to get a bit complicated, so readers are advised to consult this excellent article for a good overview. As the aforementioned article describes, homocysteine is an amino acid that, when its levels in the blood become excessive, increases the risk of cardiovascular disease. Consequently, keeping homocysteine levels in check is a vital part of maintaing a healthy heart and circulation.

Levels of homocysteine are regulated by two pathways. One of these pathways recycles homocysteine into another amino acid, methionine. This pathway is actually another example of a methylation reaction, as it involves adding a methyl-group (-CH3) to homocysteine to form methionine. In this reaction, methylfolate (which is produced from folate/Vitamin B9 in your diet) acts as a methyl donor. Vitamin B12 helps to catalyze (speed up) this reaction.

Alternatively, a molecule called betaine can act as a methyl donor in this conversion. Betaine, in turn, is formed from choline. Choline is therefore indirectly important for lowering levels of homocysteine (and also producing methionine).  Furthermore, people who have diets low in folate (and therefore methylfolate) also have a higher need for choline. This is because betaine (which is formed from choline) acts as a methyl donor in the absence of methylfolate.

If that all sounds complicated, hopefully the diagram below will clear things up a bit. The take home note is that it's important to get enough choline from your diet in order to prevent levels of homocysteine from rising. 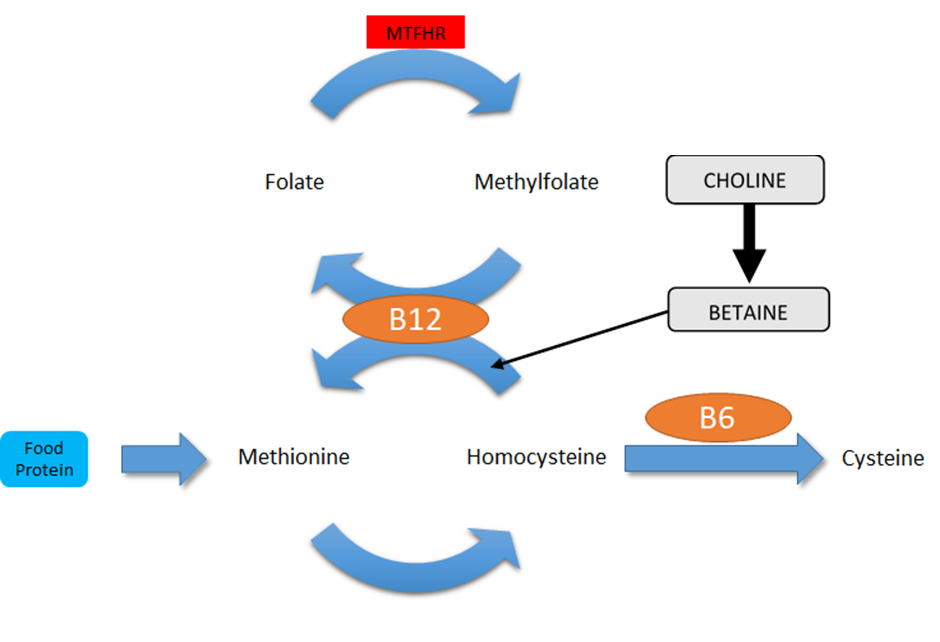 Choline and your genes

Several different genes affect the liver’s ability to produce choline. One of these is the PEMT gene, which encodes an enzyme involved in the synthesis of choline. Some variants of this gene increase a person’s risk of choline deficiency.

Another important gene is the MTFHR gene. As explained in the linked blog article, the C variation of the MTFHR gene is associated with a poorer ability to convert folate into methylfolate. This then compromises the ability to lower levels of homocysteine by turning it into methionine. To counteract this, people with the CC genotype of the MTFHR gene may need to increase their choline intake. This will allow them to produce more betaine, which, in turn, can help lower the levels of homocysteine.

How much choline do I need?

The recommended Adequate Intake of choline is:

What happens if I don’t consume enough choline?

Studies demonstrate that people fed a diet deficient in choline go on to develop fatty changes in their liver and associated liver damage. They also experience muscle damage. Crucially, all of these symptoms disappear and the damage is reversed when choline is reintroduced to the diet.

What are good sources of choline?

The following foods are particularly high in choline: